I spend a lot of time writing about our road trips in Europe, but the truth is we have just as much fun traveling in our home country of the US. I've tended to ignore these shorter trips on my blog but recently decided I was going to try to write up every trip as soon as possible after coming home so I would remember the details. From the perspective of travel, the US is more like China than a European country. Because of its size the regions are more diverse but they're not all accessible from each other on a single trip. Also, much of the diversity is confined to the cities. 90% of the rural areas are actually quite similar culturally even if they have their own special attractions. That's why I groan every time a European tells me about a big plan to drive from the East Coast to the West Coast. They're buying themselves a whole lot of monotony between interesting stops.

The best way to see the US is to carve out regions that have their own individual culture as well as interesting cities and focus on them for a week or two. We've done that before in New England, Southern California, the Deep South, and Pacific Northwest. This time round we only had a week for the kids' spring break so we looked for a place close to Miami and settled on New Orleans and Cajun Country. That's a fairly small area so I decided to expand the itinerary to include southern Mississippi, which is a bastion of cotton belt culture. 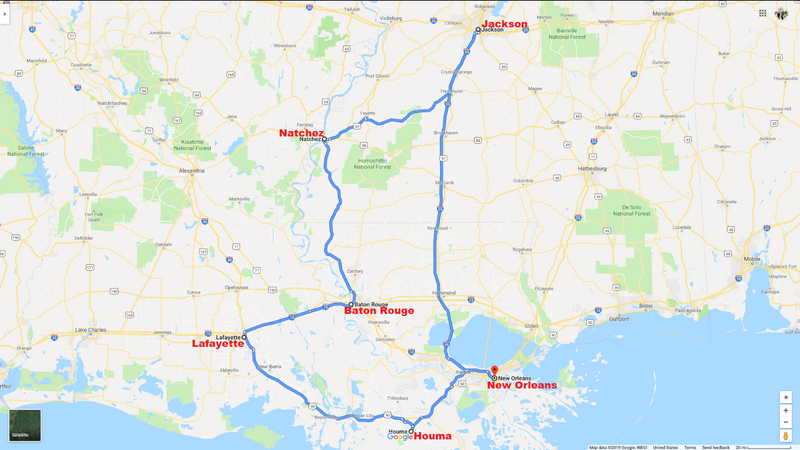 We caught an early morning flight which got us to New Orleans at ten in the morning. We picked up our minivan and drove straight to the Louisiana Crawfish Festival in the eastern suburb of Chalmette. Peak crawfish season is March through May, and during that time there are crawfish festivals practically every weekend in Louisiana. Mei Ling and I both love crawfish, although I'm hard-pressed to explain why I prefer them to something more common such as shrimp. I think the attraction is largely in the process of extracting them from their shells which crack in a very satisfying way, followed by the salty umami of sucking the liver out of the head. The main thing that distinguishes one crawfish from another is the size and the quality of the boil. If you've had boiled crawfish before and you weren't impressed, odds are you were served the typical small specimens served in restaurants outside of Louisiana, or even frozen ones. Even in New Orleans the restaurants in the more touristy areas tend to serve the diminutive type. Traveling in rural bayou country proved to be an eye-opening experience in that regard.

The festival was set up in the enormous parking lot of the local civic center. At one end was a stage and just as we arrived they were holding a crawfish eating contest for a group of local beauty queens. Most of them ate like they didn't particularly care to win first place. Following that they moved over to a large square table for a crawfish race. The girls slapped their hands furiously on the square table, trying to get a crustacean to crawl over to them. 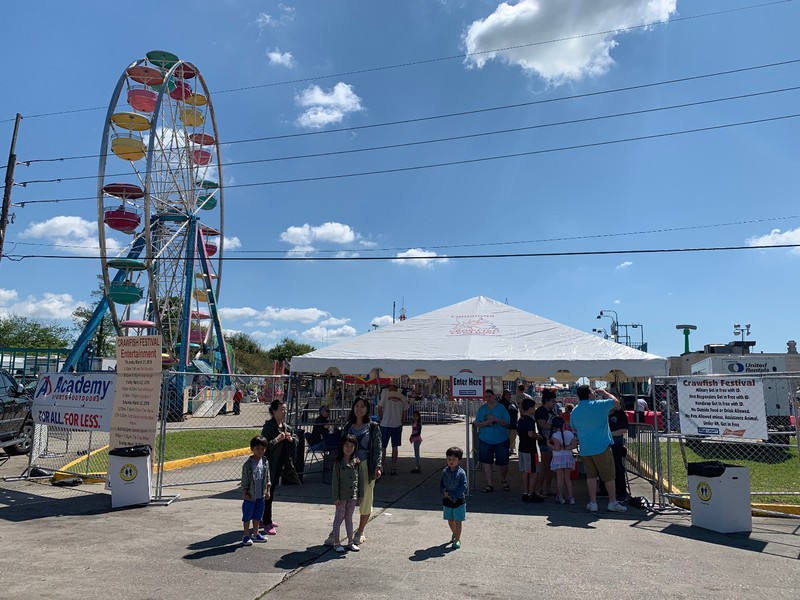 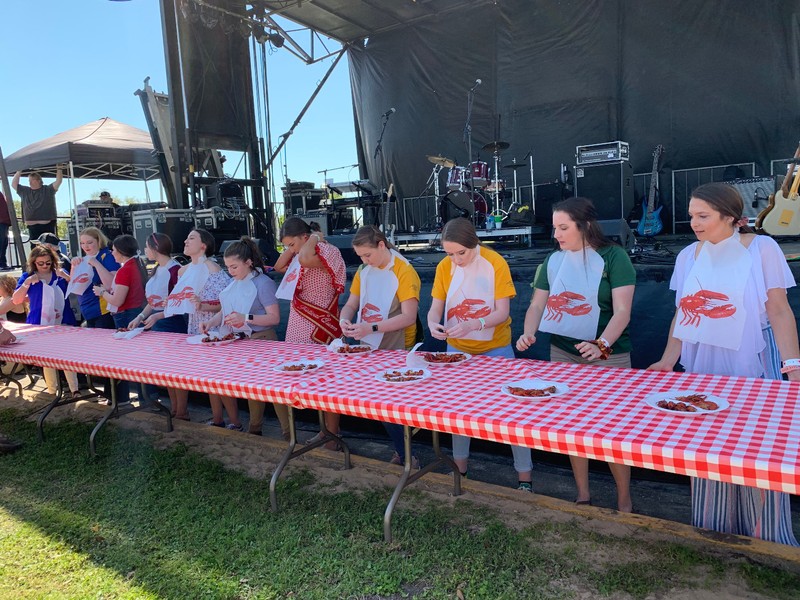 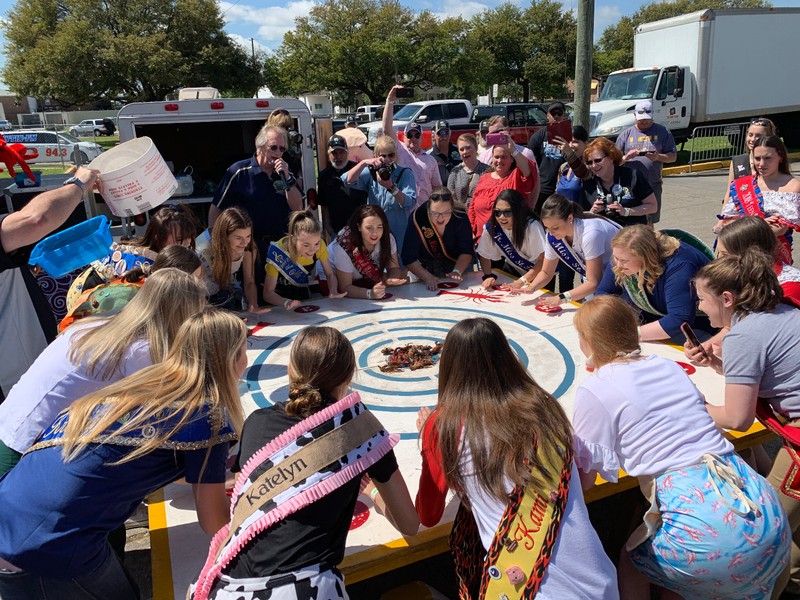 There were plenty of food stalls but only one with the star of the day, freshly boiled crawfish. We made short work of two heaping cartons, washed down with ice cold beer. 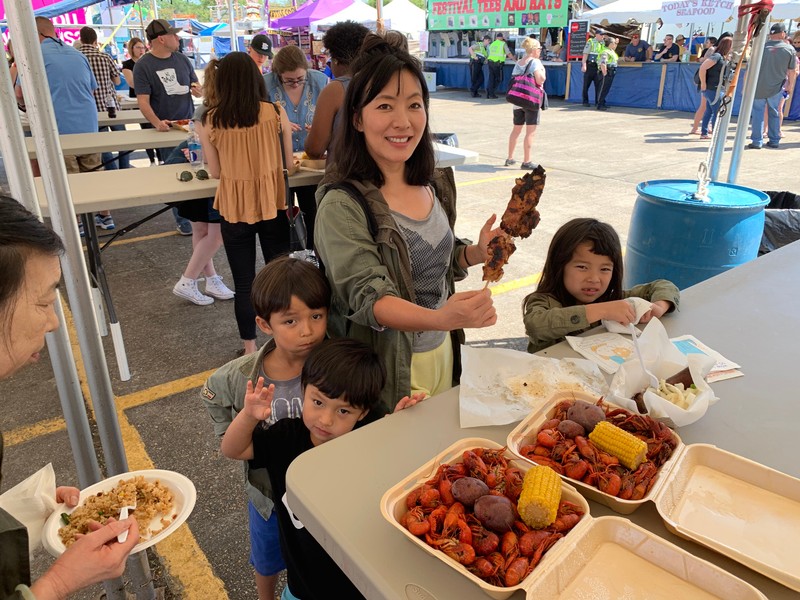 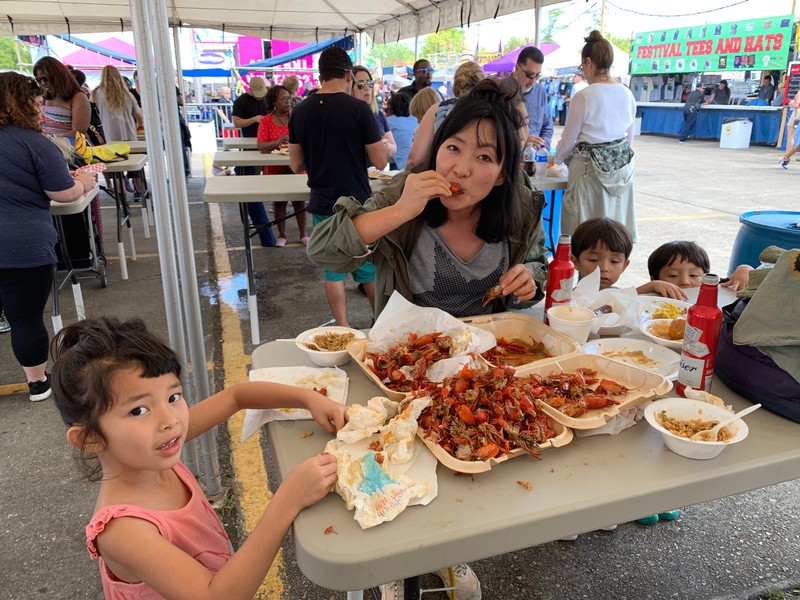 After lunch we took the kids over to the carnival rides and let them have some fun with the Ferris wheel and bumper cars. The festival had been the perfect way to kick off our road trip. It set a tone for good food and energetic fun that we planned to sustain for the whole week. 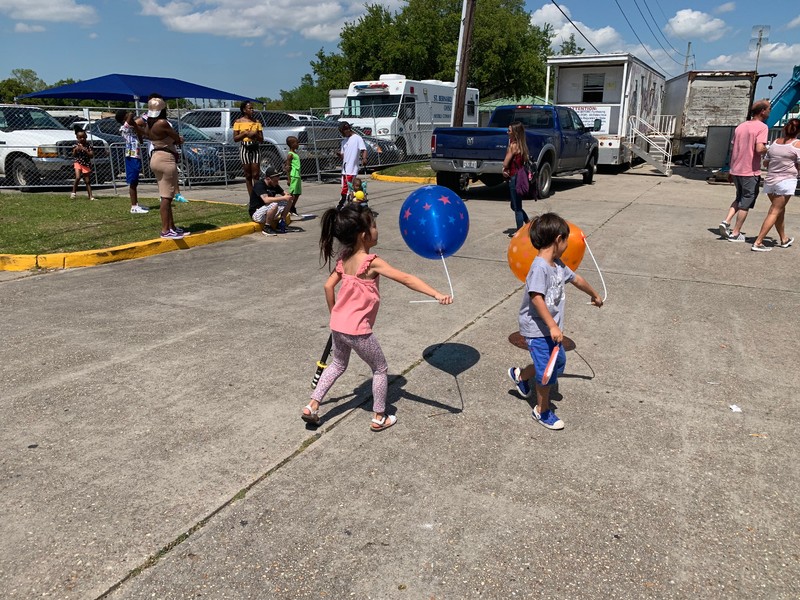 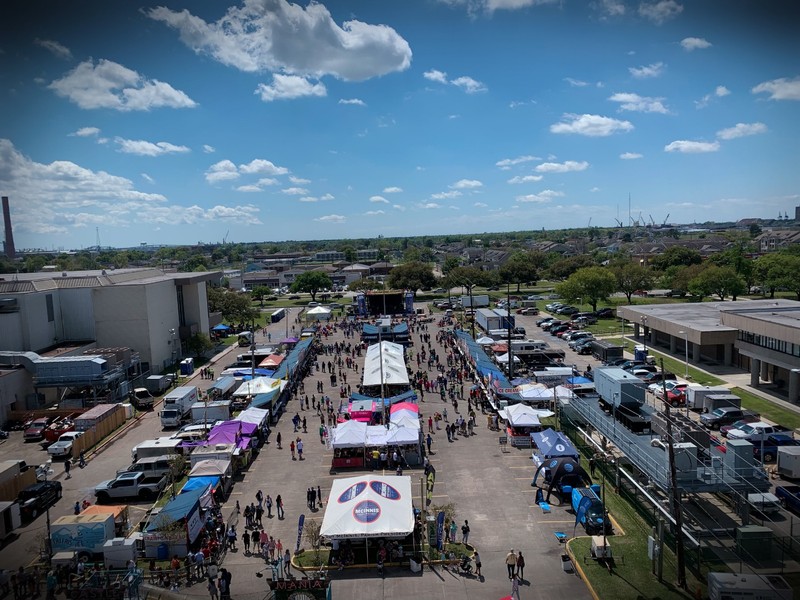 Instead of taking the direct route west to Lafayette via Interstate 10, we detoured southward through bayou country and the town of Houma. I wanted to get a little closer to the amazing Louisiana coastline, which looks like it was attacked by gigantic land-eating moths. 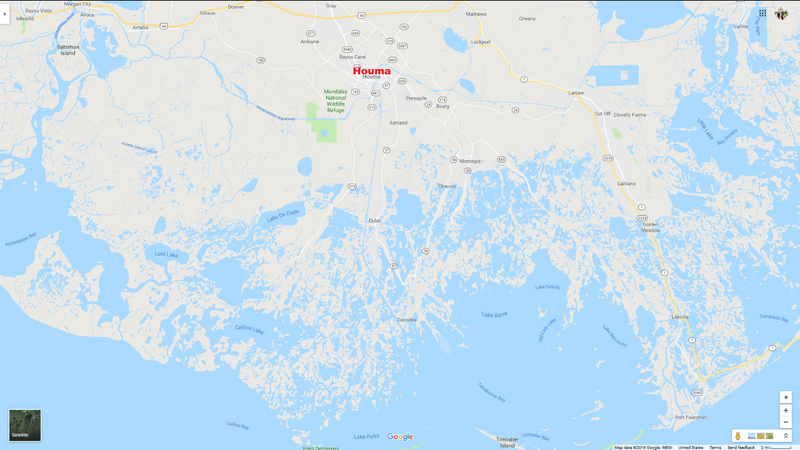 The other attraction in Houma was that it was home to some of the most renowned crawfish restaurants in Louisiana. We had just stuffed ourselves at the festival a couple of hours earlier, but we decided to make a stop at Cajun Critters anyway. It was a folksy restaurant with a lot of nautical decoration and politically incorrect placards in the restrooms. 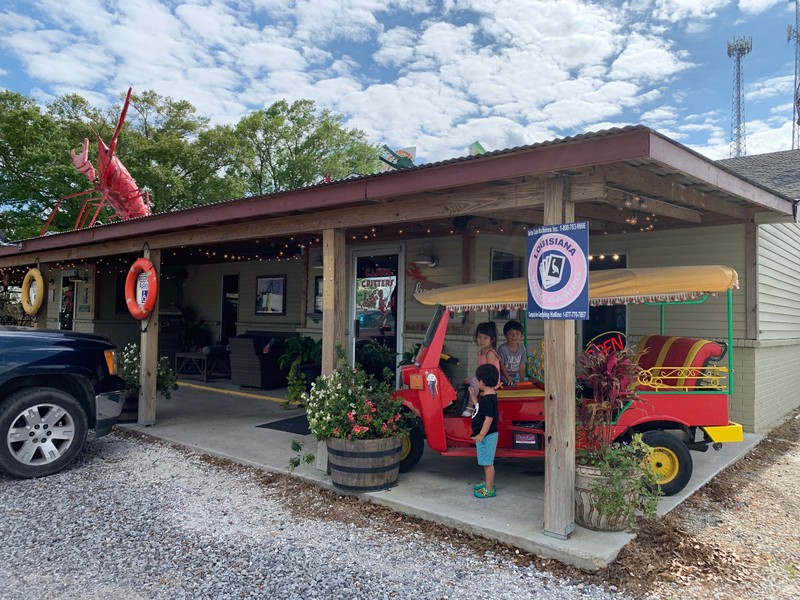 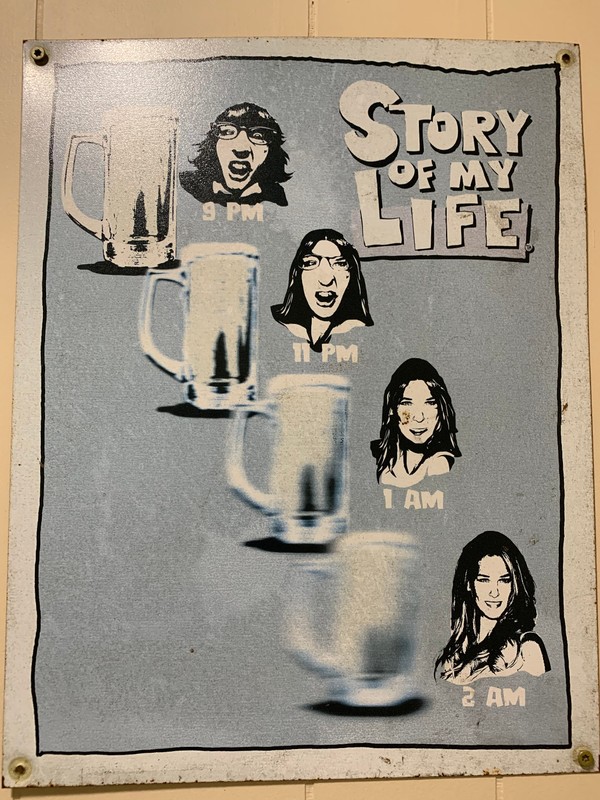 Besides the obligatory crawfish, we ordered gumbo and oysters which turned out to be meaty and delicious. We were fortunate to be there during oyster season, which runs from Labor Day through the end of April. The Gulf of Mexico is home to many varieties of oyster and Louisiana boasts the largest remaining oyster reefs in the world, despite the Deepwater Horizon oil spill of 2010. The crawfish were larger and tastier than the ones we'd had at the festival. Somehow once we saw the food it was like we hadn't eaten at all that day. 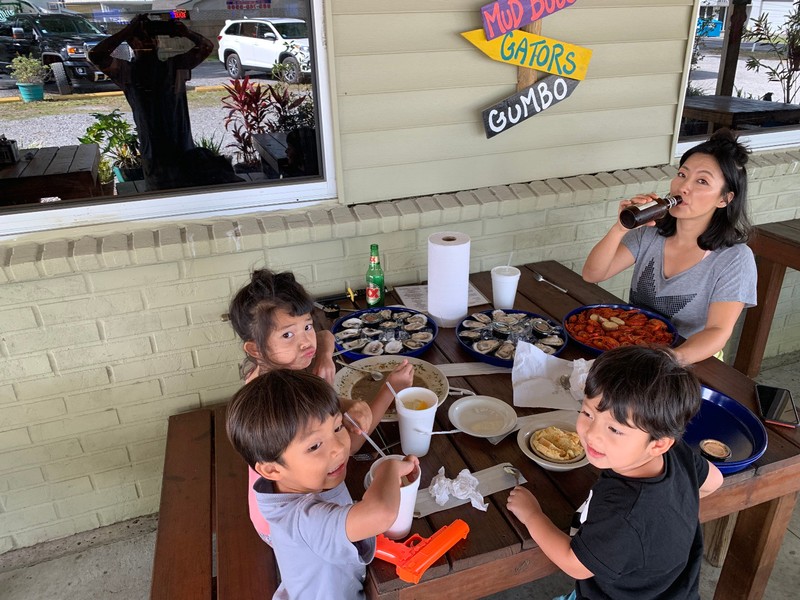 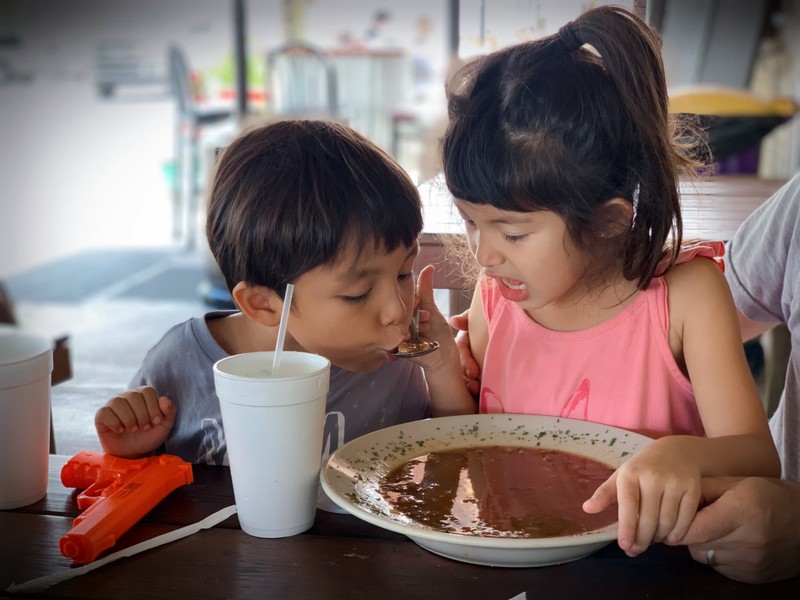 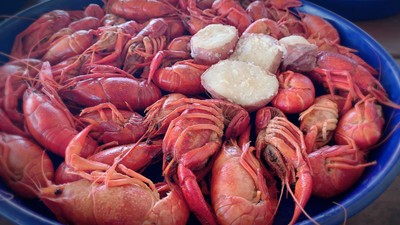 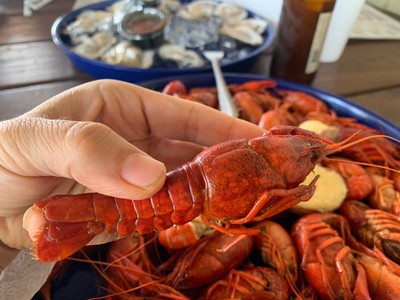 We drove around the town of Houma, using Zillow to guide us to the neighborhoods at different economic levels. The best neighborhoods were immaculately maintained with beautiful houses that cost about a third of what they would in Miami. Our favorite was one that was festively decorated for Easter in a more blue collar area. 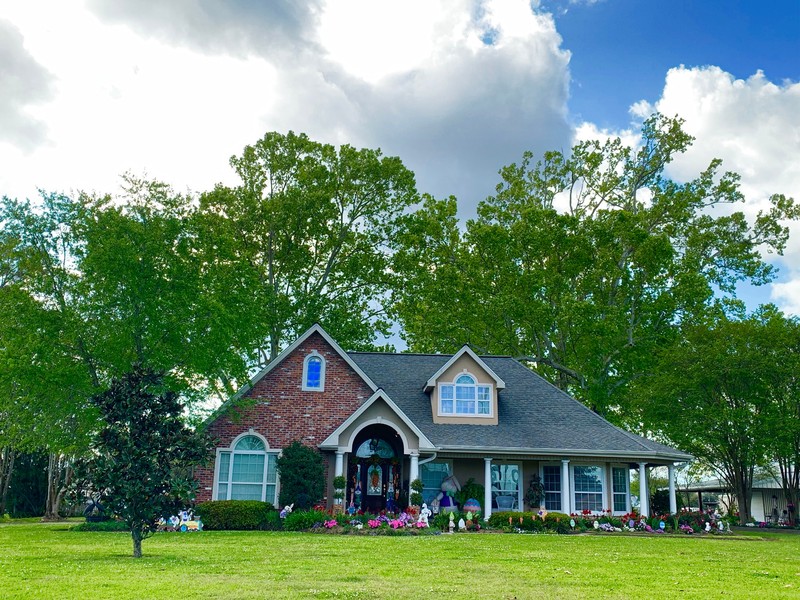 I tried to figure out a way to explore the myriad bayous and islets that form Louisiana's tattered coastline by car and couldn't come up with anything. There doesn't seem to be much for travelers down there aside from fishing trips and airboat tours. The few roads that extend all the way to the shore seem to pass mainly through unattractive industrial areas. Instead we decided to press on to Lafayette and check into our Airbnb before it got too late.