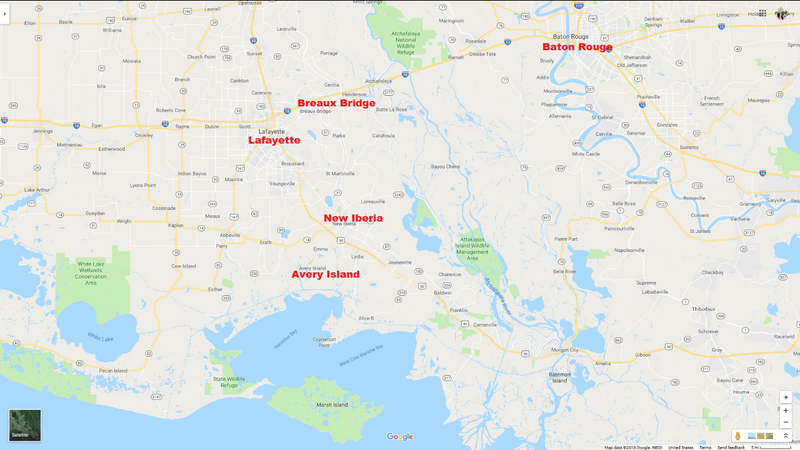 New Orleans may get all the press, but the heart of Cajun country is the smaller and lesser known city of Lafayette. The official name of Cajun country is Acadiana, and it extends across the southern part of Louisiana from the western edge of New Orleans to the Texas border. That's right, New Orleans isn't even part of Cajun country. The name Acadiana is derived from the region of Acadia in the Northern Atlantic coast which included the French colonies that eventually became Quebec. When the British conquered Acadia in the early 18th century, many natives migrated to the French colony of Louisiana which was eventually purchased by the United States. The area in which the Acadians settled became known as Acadiana, and the word Acadian was eventually corrupted to Cajun. Cajun is a genuine subculture of the United States, having their own language, music, and cuisine. Lafayette became the center of the Cajun community when the governor of Louisiana in the mid 18th century began actively settling Acadians in the area, granting them land among the bayous. 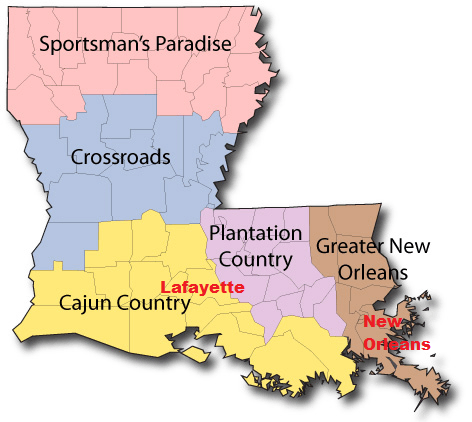 Our Airbnb in Lafayette was an unassuming but spacious house close to the center of town. There was a large backyard with banana trees and a beat up soccer ball that kept the kids entertained for an hour until it was time for dinner. 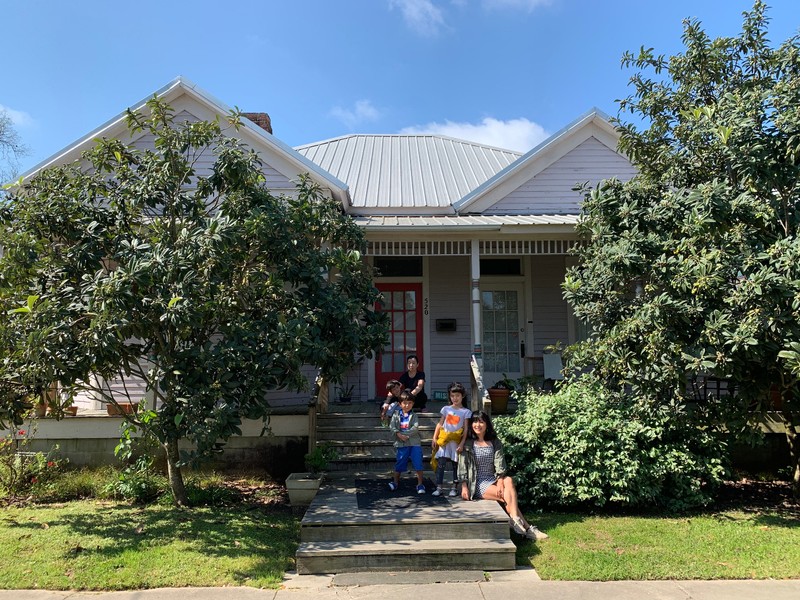 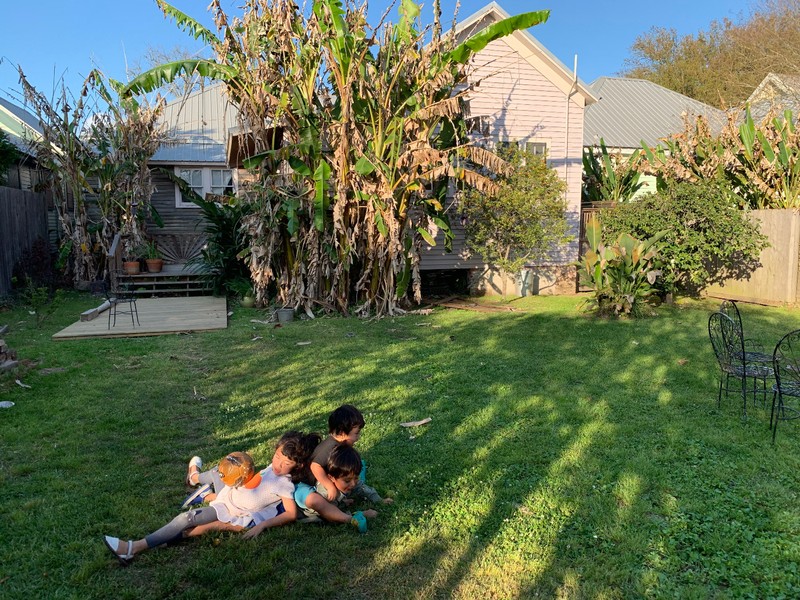 One might think at this point that we'd had our fill of crawfish for the day, and one might be wrong about that. The most popular boil in town was a hole in the wall in a strip mall, but their crawfish were huge and spicy. Mei Ling had figured out by this point that the right way to order the crustaceans was in five pound portions, and I eventually had to cut her off much in the same way I've dragged friends out of bars in my younger days. 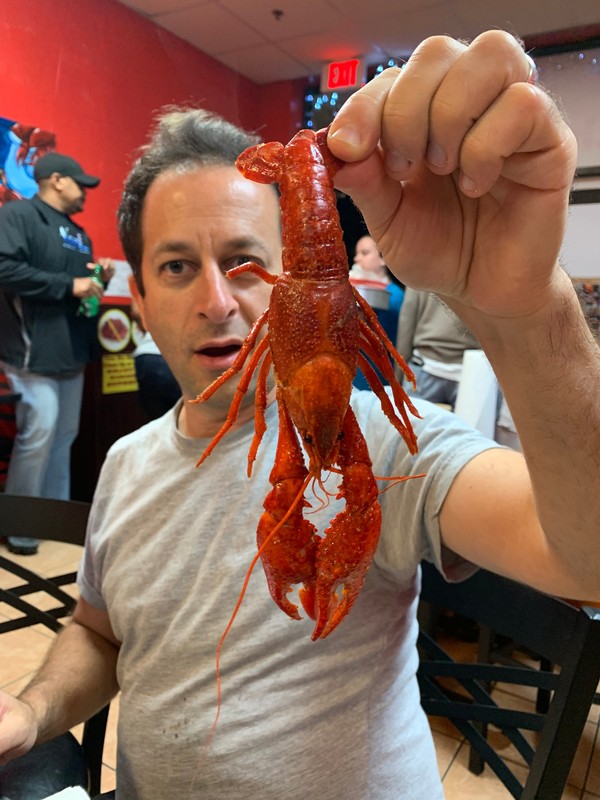 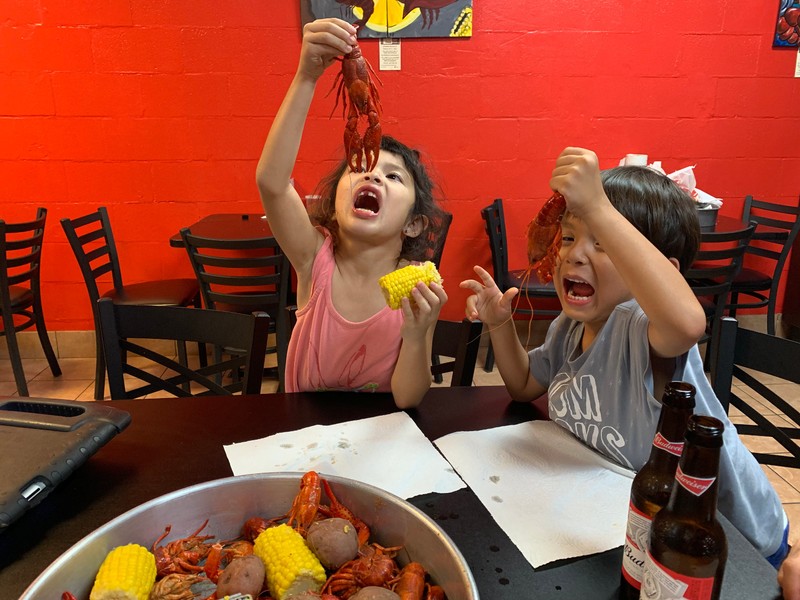 After dinner we went to a couple of bars downtown in search of Zydeco music. This unique musical genre fuses accordion with traditional rhythm and blues instruments to create a sound that is emblematic of Acadiana. Unfortunately there was nothing going on Sunday night and we retired to the Airbnb empty-handed.

In the morning we walked to downtown for breakfast, passing several trees that were still festooned with beads from the Mardi Gras parades three weeks earlier. Thankfully we were able to get through breakfast without any crawfish making an appearance. 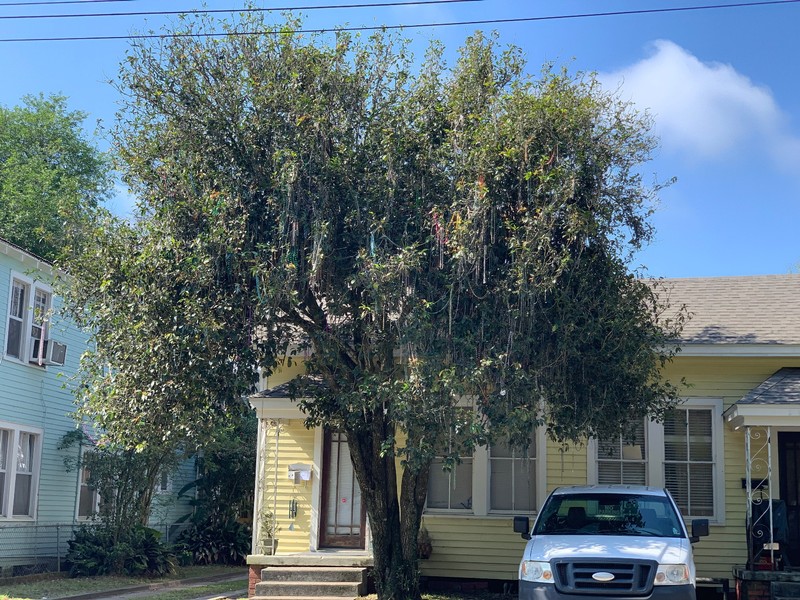 We drove half an hour south to Avery Island to visit the Tabasco factory. This was an odd choice because neither of us particularly cares for Tabasco sauce. I used to put it in soup when I was younger before I discovered more textured hot sauces like Sriracha, but now it just tastes like fiery vinegar to me. We were more interested in Jungle Gardens, the botanical garden adjacent to the factory that can be toured by car. Avery Island isn't an island in the typical sense of the word as it is only separated from the land around it by narrow bayous. Tabasco sauce has been manufactured on Avery Island since the mid-19th century.

The Tabasco factory itself wasn't very exciting but fortunately we weren't pressed for time and just let the kids figure out different ways to amuse themselves. The good thing about our kids is that it's almost impossible to get bored when they're around. 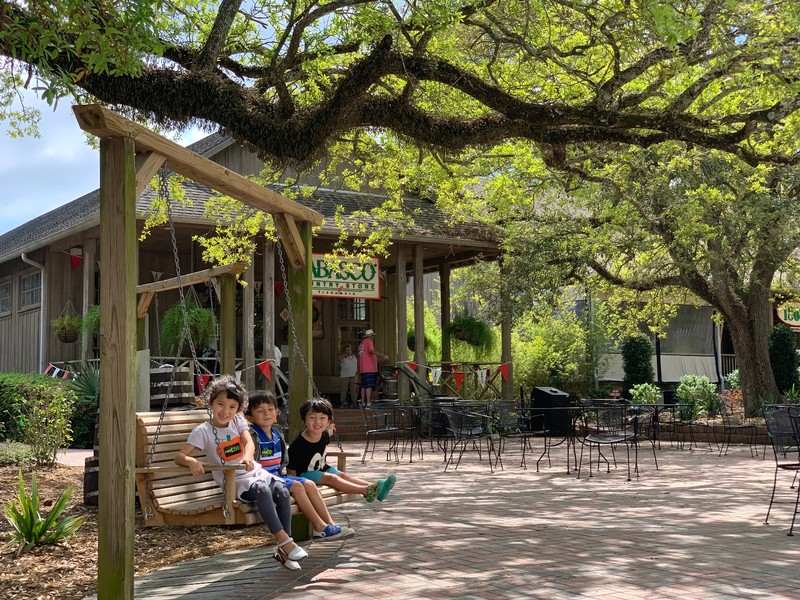 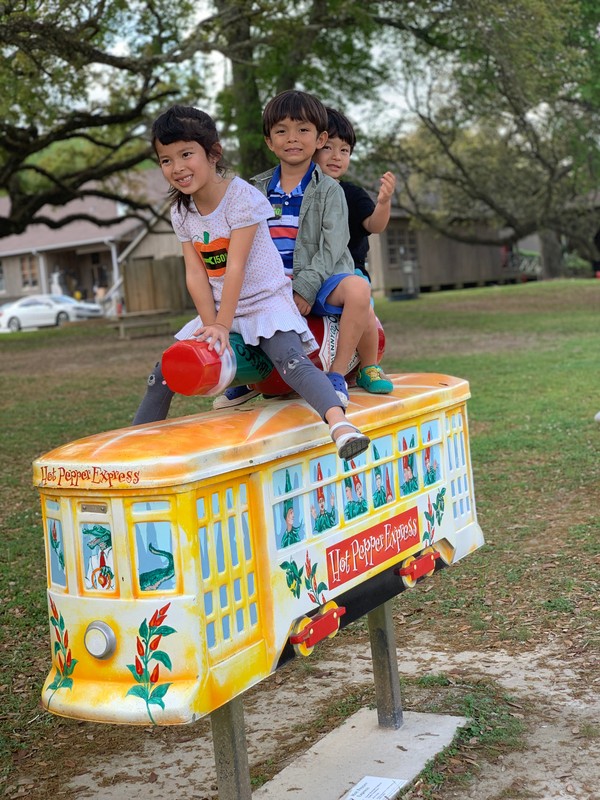 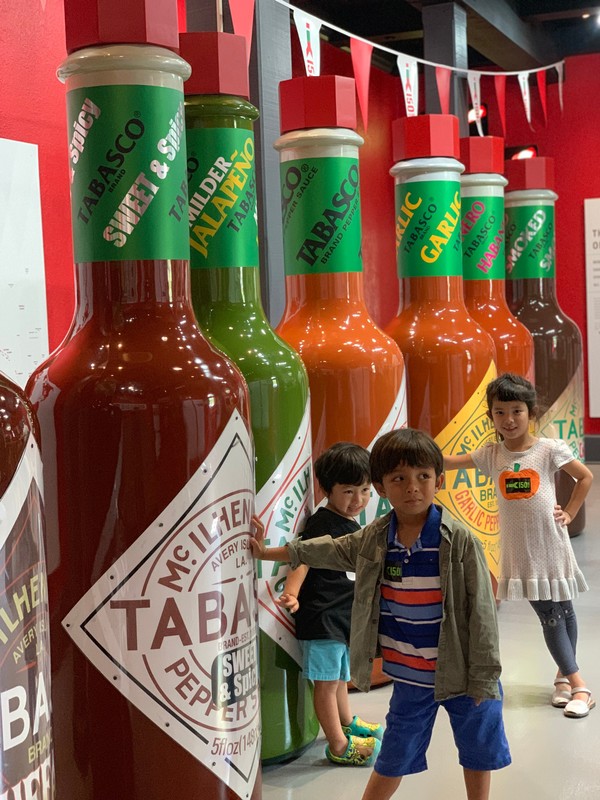 Jungle Gardens made the trip down to Avery Island worthwhile. A gravelly road took us along the bayous through stately trees decked in Spanish moss. At one point we parked the car and walked through a forest of palm trees and bamboo that seemed almost prehistoric. 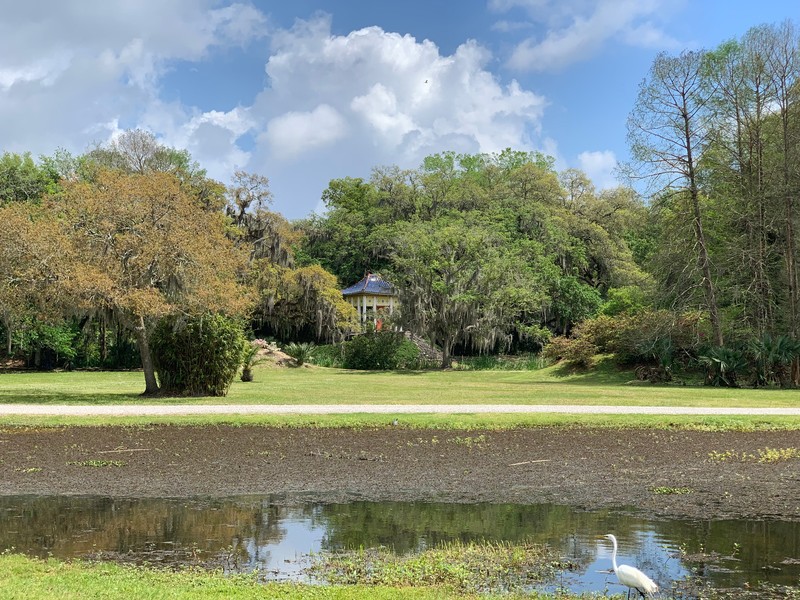 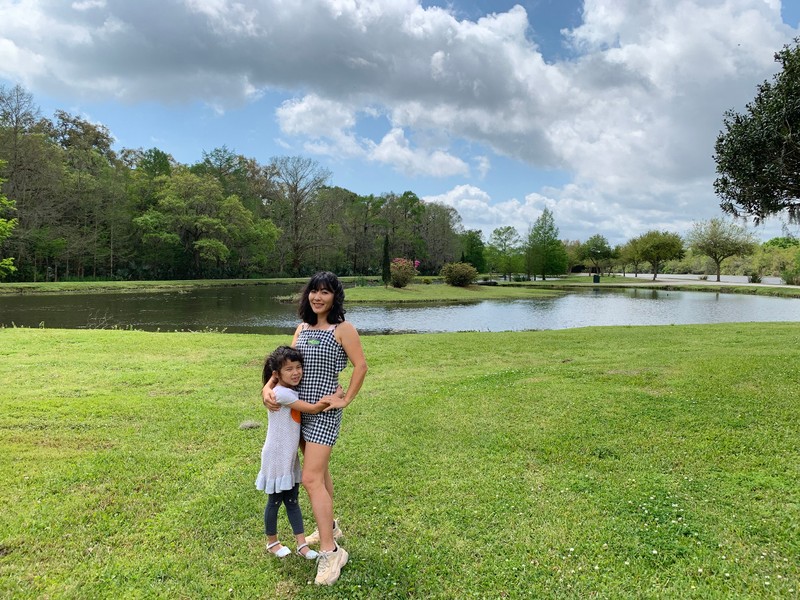 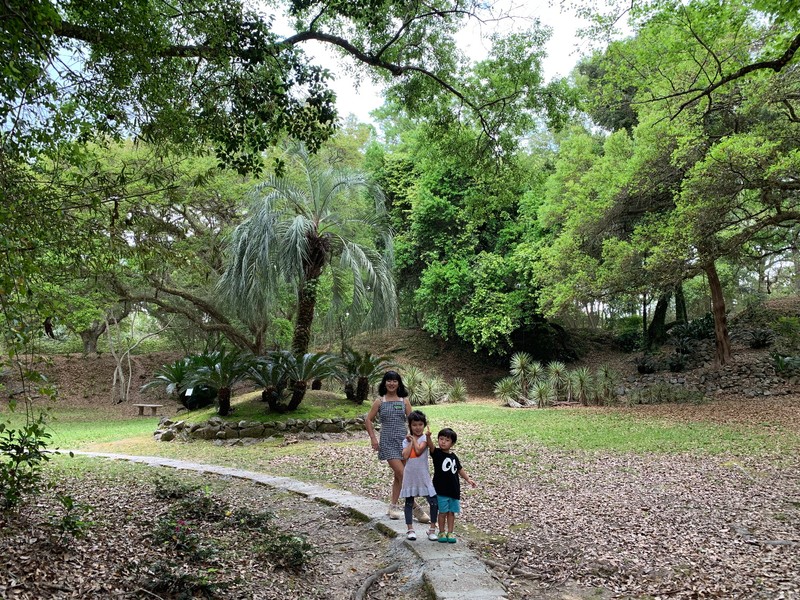 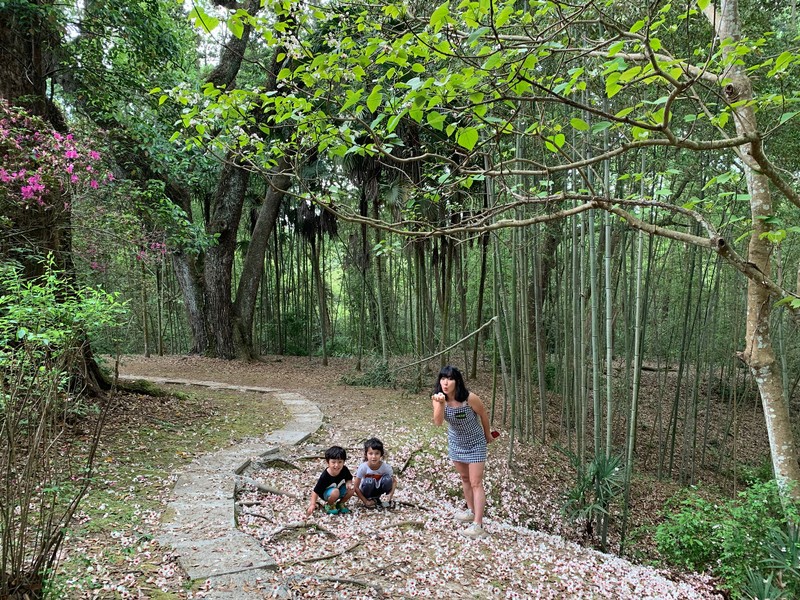 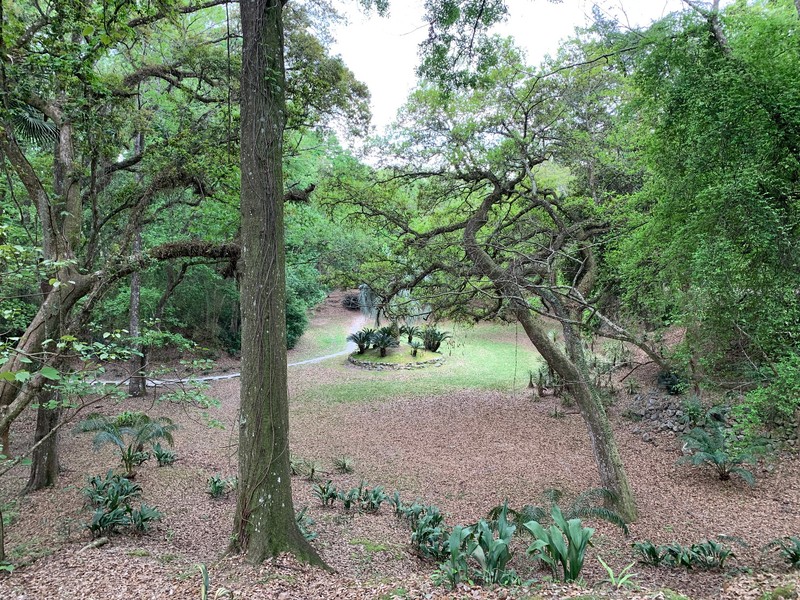 On the way back to Lafayette we stopped in the town of New Iberia for more huge crawfish. Mei Ling's Bloody Mary came with a whole deep fried soft-shelled crab on top. 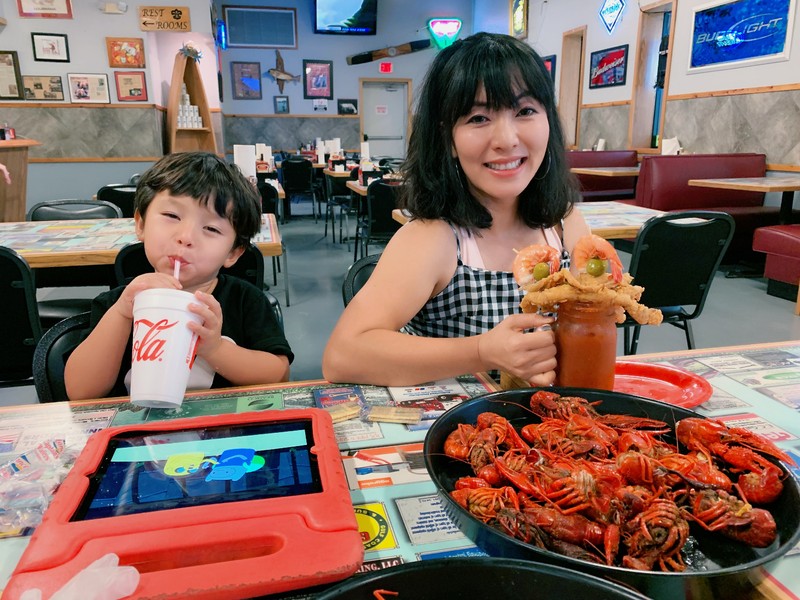 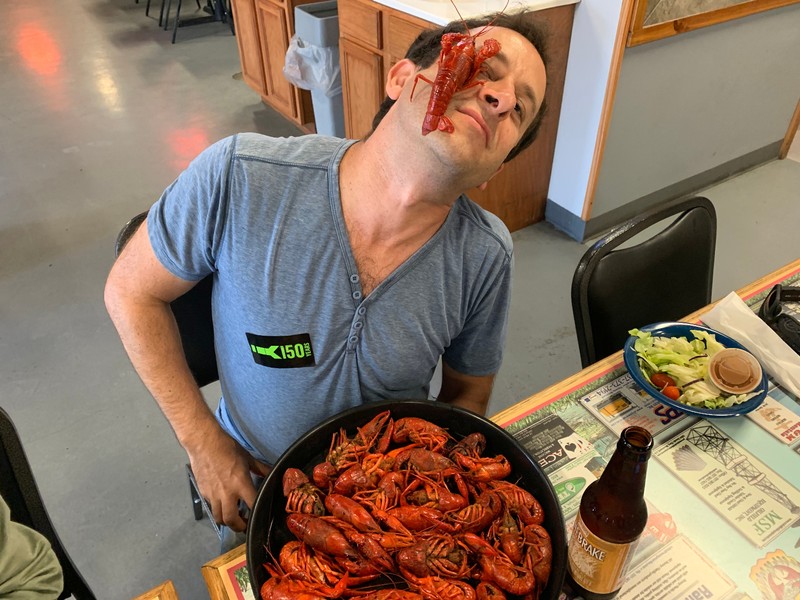 Tuesday morning we got started with a boat ride with Champagne's Cajun Swamp Tours outside of Breaux Bridge. For about an hour and a half we motored gently through the bayous, some of which were still enough to reflect the bald cypresses that surrounded us and others which were covered by an unbroken green carpet of algae. The highlight was the enormous alligators that were basking in the sun, seemingly oblivious to our presence. 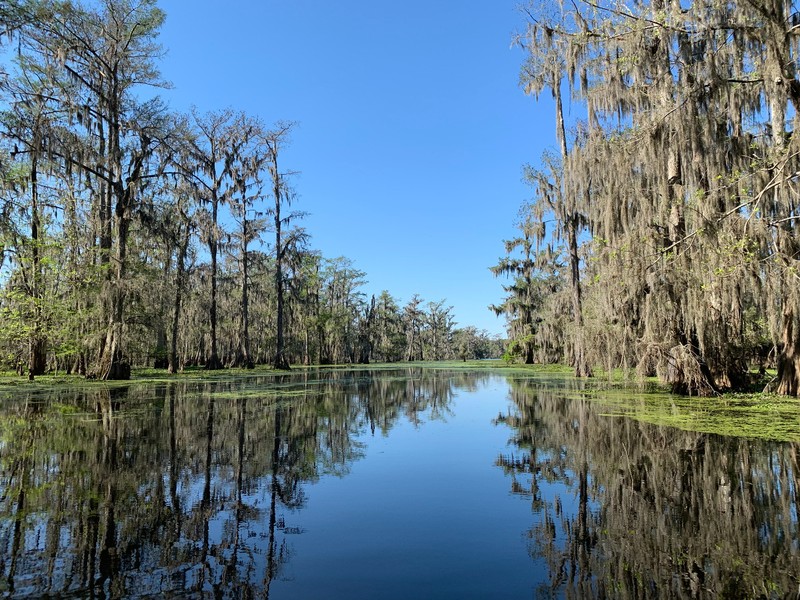 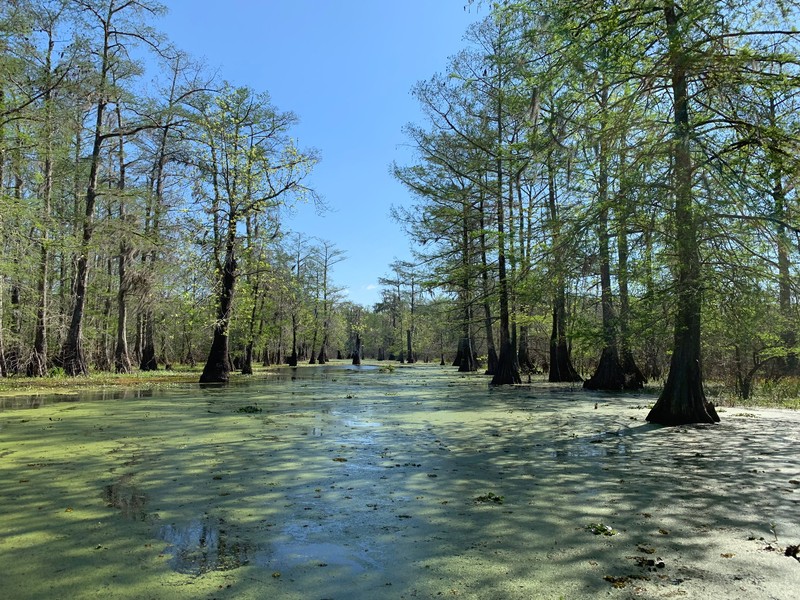 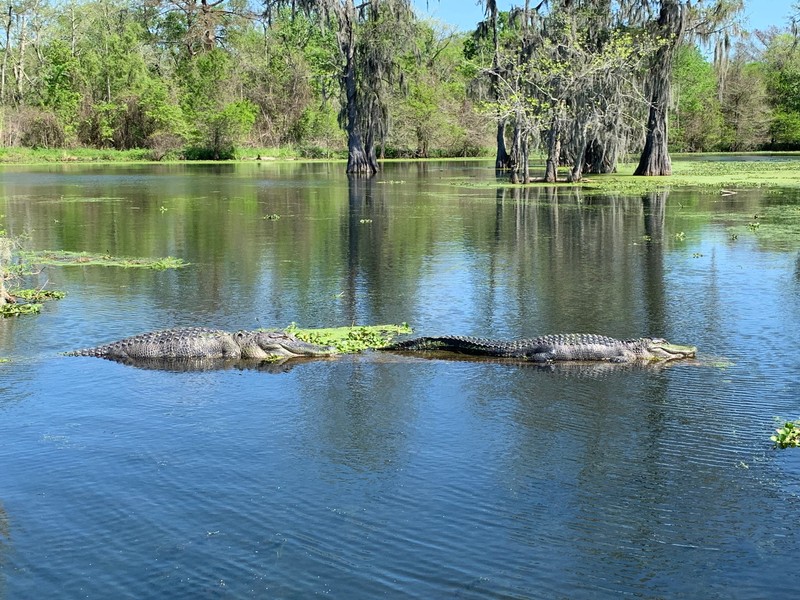 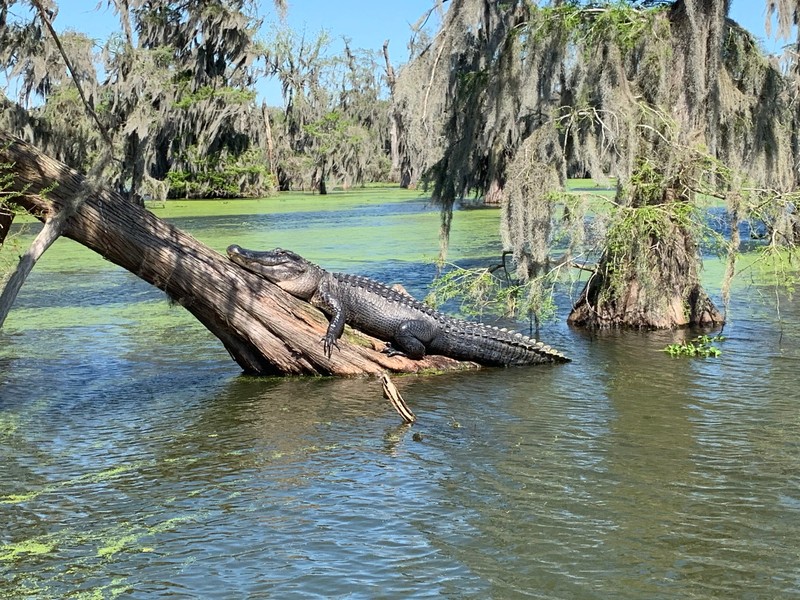 After lunch in Breaux Bridge we got back on the road and soon arrived in Baton Rouge, the capital city of Louisiana. While Baton Rouge is far smaller than New Orleans, it boasts some beautiful buildings including the Old State Capitol building. This 19th century Gothic-Revival castle is now a museum of political history. We took a short drive around the city center and saw some charming residential neighborhoods with classical Southern mansions. 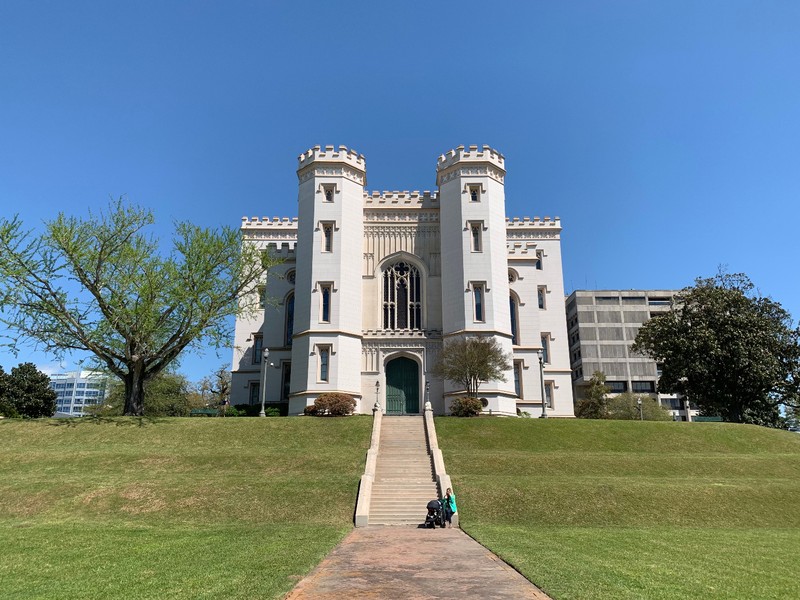 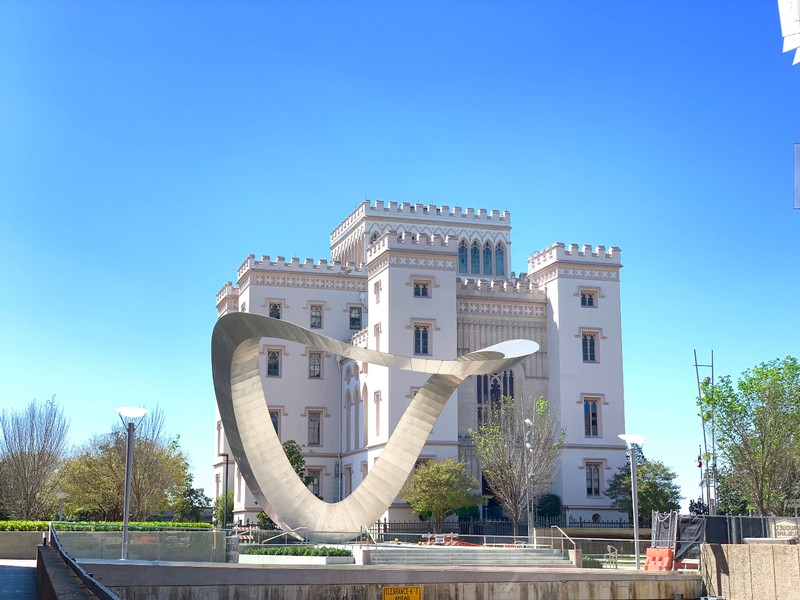 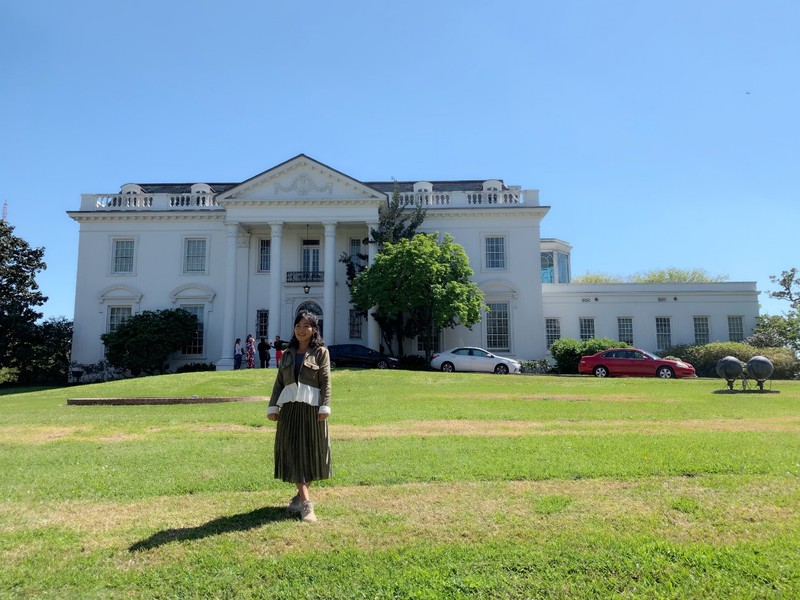 Once we left Baton Rouge, it was time to say good bye to Louisiana for a couple of days as we headed north to Mississippi, the second state of our trip.