When I planned our itinerary, I knew there was no question that we would stop in San Marino once I realized we would pass close by. Who could resist this tiny independent nation, which claims to be the oldest sovereign state in the world and is the second smallest in Europe after Monaco? Aside from the curiosity of its size and its position entirely surrounded by Italy, San Marino is home to spectacular mountaintop castles that look like they came straight from the set of the Lord of the Rings.

The drive from Urbino to San Marino ended up being more challenging than I expected. Despite the fact that darkness had fallen, I chose the inland route that was shorter in distance but longer in time than the coastal route. I really hate retracing my path on a road trip, and the coastal route would have meant doing just that. The inland route, however, was a tortured affair of single lane roads and hairpin turns that caused Mei Ling to lose her dinner just as we were arriving in San Marino. I'm sure the views would have been magnificent had we taken the drive during the day, but the deep darkness ensured that the only view I had was the 100 meters of road illuminated by my high beams. I also lost navigation somewhere around the border, although I still had GPS. I'm still not sure if this was due to loss of signal due to the mountains or if for some stupid reason Italian SIM cards don't work correctly in San Marino. It's hard to imagine a tiny country like San Marino with its own cell phone plans, but wonders will never cease in Europe. Despite the last minute navigation problems, we found our way to Hotel Joli in Citta di San Marino without too much difficulty. I had some difficulty communicating with the night manager due to my weak Italian and his almost complete lack of English, and both of us felt rather silly much later to discover that we could converse easily in French. We ended up with a single room for the four of us, but it didn't really matter as both kids went to sleep easily and didn't wake up until morning.

The next day we stocked up on the hotel breakfast and headed towards the funicular, which would take us down to the farmer's market in Borgo Maggiore. The terrace at the funicular station afforded some great views over San Marino. 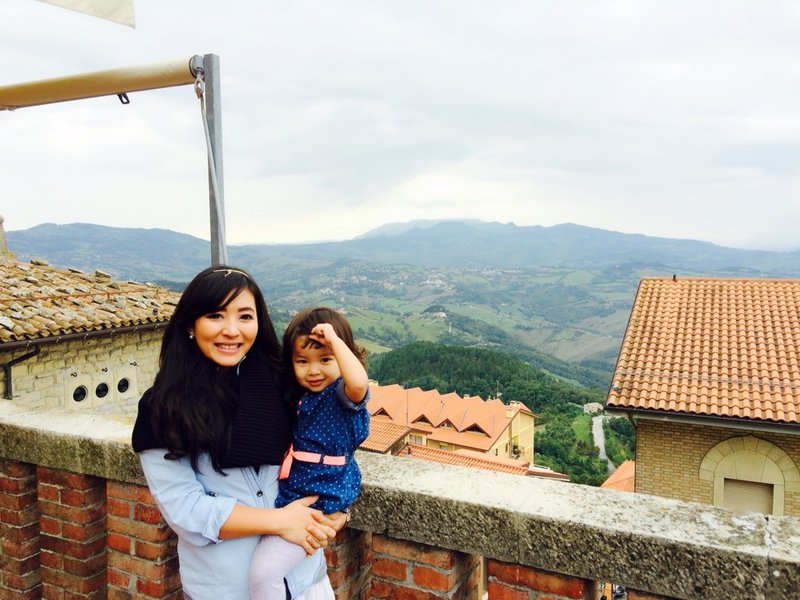 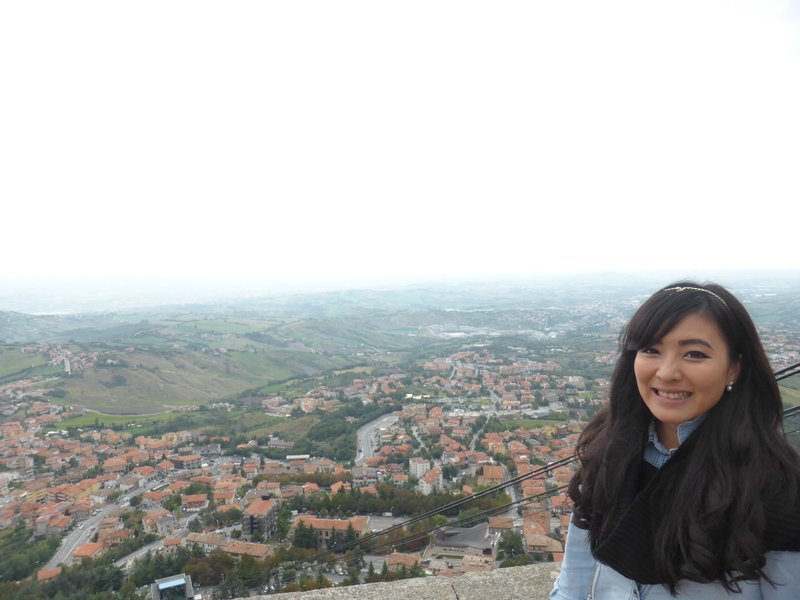 Cleo rode the funicular for free. 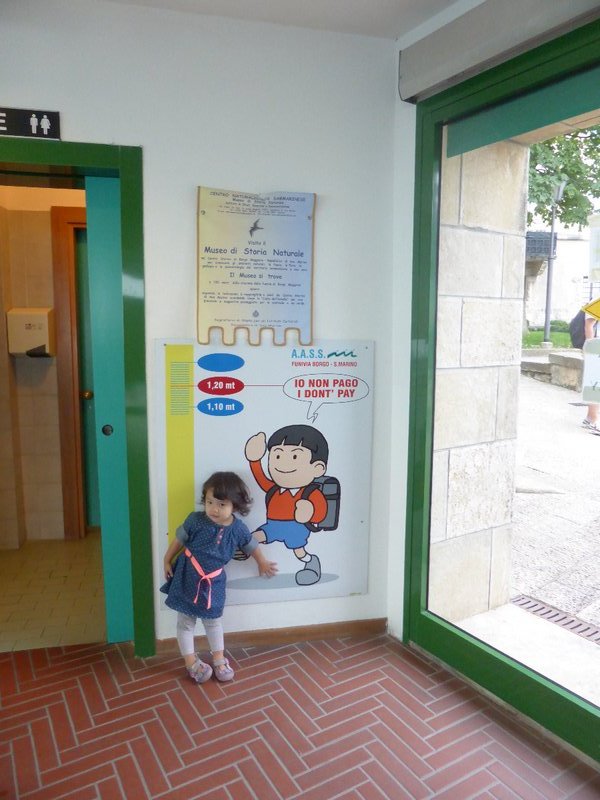 We were fortunate to be in San Marino on market day for Borgo Maggiore. The produce market was small but it was a nice opportunity to ride the funicular and see a slice of everyday life in San Marino. 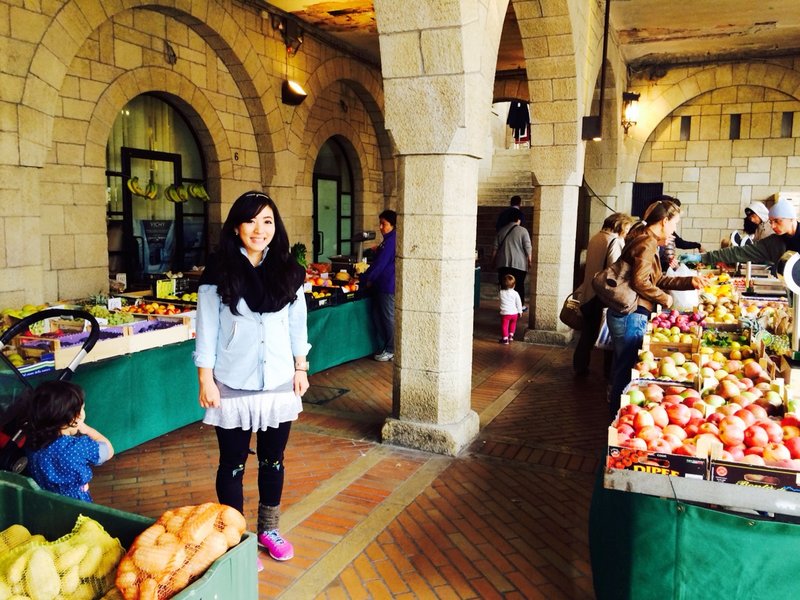 We returned to the car to drop off our fruit purchases, where we made a pretty big mistake. We forgot to put the kids in the carriers and leave the gondola in the car, which turned out to bite us in the end. The walled city is a series of narrow terraces climbing up the mountain connected by steep paths. The locals manage to stuff a impressive array of souvenir shops, snack joints, and designer outlets along the sloping streets which creates something of a sterile atmosphere. The real payofff comes at the top with the beautiful medieval castles of Torre Guaita and Rocca Cesta. 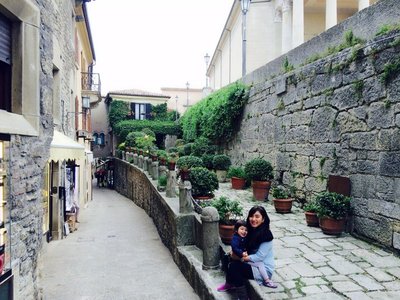 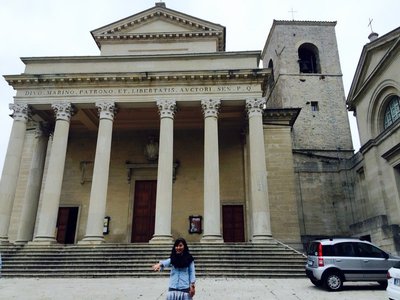 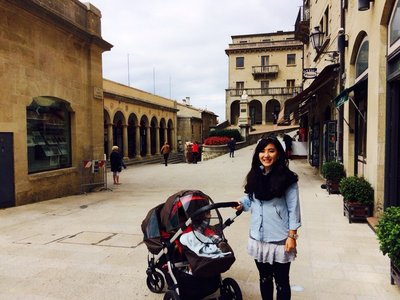 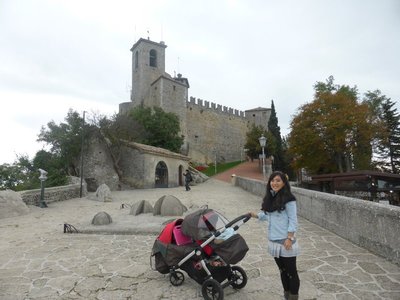 We made it to the entrance of Guaita and realized that there was a steep staircase leading up into the ramparts and the tower. Without the carriers, it wasn't going to be safe or comfortable to go up and we didn't have anywhere to leave the gondola and valuables. We decided to walk towards Rocca Cesta instead and got close enough to see the castle, but the path became impassable for the gondola and we had to settle for pictures. 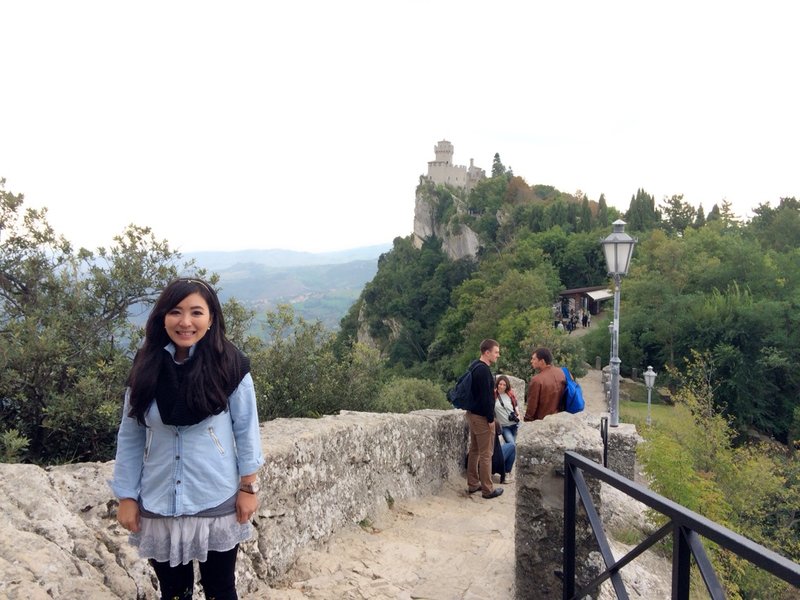 On the way back down we hunted for one of the top rated restaurants on TripAdvisor called Smaller, and eventually found it after walking back and forth in front of it three times. It ended up being worth the trouble, providing satisfying portions of Marche standbys like gnocchi and grilled meats. After lunch, there was nothing left to do but work our way back down to the parking lot and head north to the region of Emilia-Romagna.