I've only written about our United States traveling when it was part of a round-the-world journey, but the fact is we enjoy taking road trips in the US and have done quite a number since we started having kids. Now that I've prioritized travel blogging a little more perhaps I'll go back and write up some of the road trips we've done in the Pacific Northwest, Upper Midwest, Deep South, and Texas. I'll start with the most recent because it's the freshest in my mind. The impetus here was our annual trip to New York City, our favorite destination in the world. When I thought about interesting places to combine with NYC, Vermont immediately came to mind. I hadn't been there since I was a kid, but the state is well-known for its beauty, great cuisine, and variety of activities. Once I started studying the map, I realized how close the northern part of Vermont was to Montreal and soon our trip expanded from one week to two and the NYC part of it shrunk to three days. There's just too much world out there to see to waste time in places we've already been, even the greatest city in the world.

Our arrival in New York was surprisingly painful, considering our flight was less than three hours. A choppy descent got everyone rattled, and then we had to take two shuttle buses to the rental car agency due to the neverending construction at La Guardia airport. The airport shuttle was particularly horrible, a stuttering and smoggy half hour to cover about three miles. Fortunately the minivan pickup went smoothly and we were on the road by seven. I'd decided to leave NYC for the final part of the trip, mainly due to the timing of things we wanted to do in Vermont but also to leave our most highly anticipated stop for the end. Finishing a trip with an anticlimax is no fun. Instead we decided to drive to Massachusetts from the airport to be ready to kick off our vacation in Old Sturbridge Village the next morning. I had high hopes of stopping for a good dinner somewhere in Connecticut but the family was exhausted and a little nauseous so we ended up snacking at a rest stop convenience store instead. The Airbnb in Massachusetts was a nice surprise, a cozy and beautifully-furnished colonial-style home on a quiet suburban street. 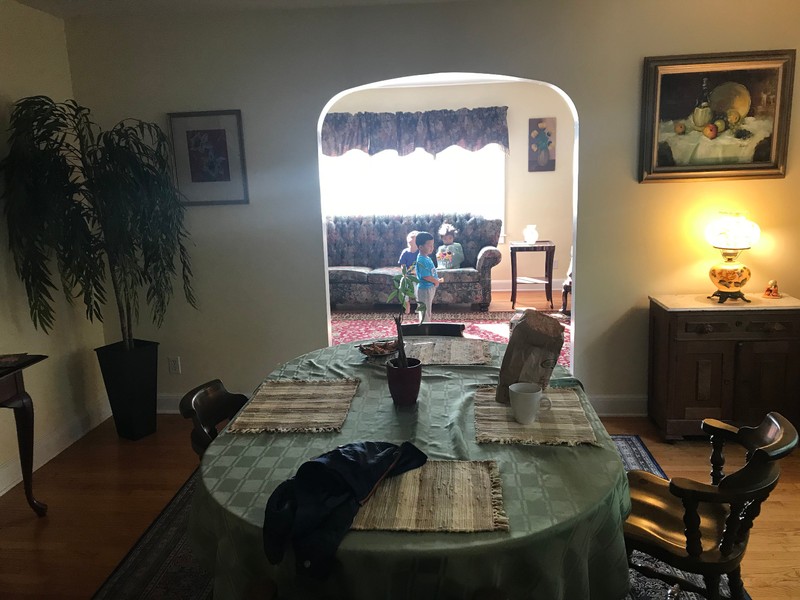 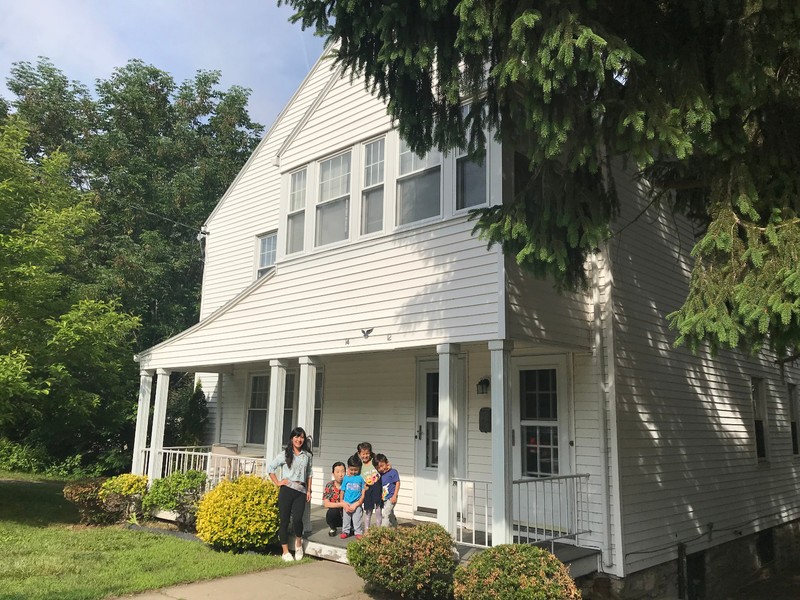 After an ample breakfast at a diner in Southbridge, we drove a few miles to Old Sturbridge Village. I still had vague memories of a field trip there from my grade school years, and I figured it would be an original experience for the kids. If we were really lucky, they might actually learn something. We arrived early enough to be ahead of the summer camp groups, but it seemed like the little town hadn't really woken up yet. There weren't that many actors around, and some of the ones who were didn't seem ready to demonstrate their 19th century skills. I remembered it from my childhood as more of a bustling town, but I easily could have been thinking of Colonial Williamsburg in Virginia instead. It was still a pleasant place to walk around for a few hours, and the kids enjoyed the flintlock rifle demonstration. 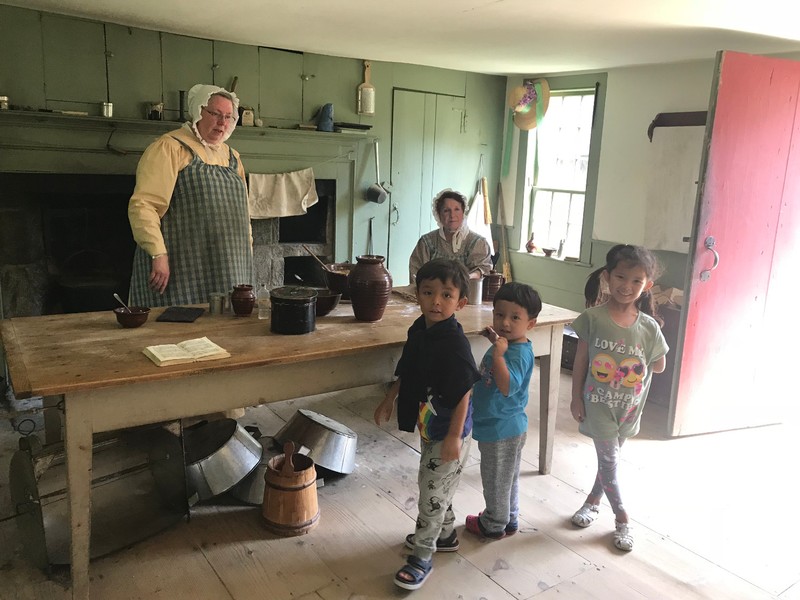 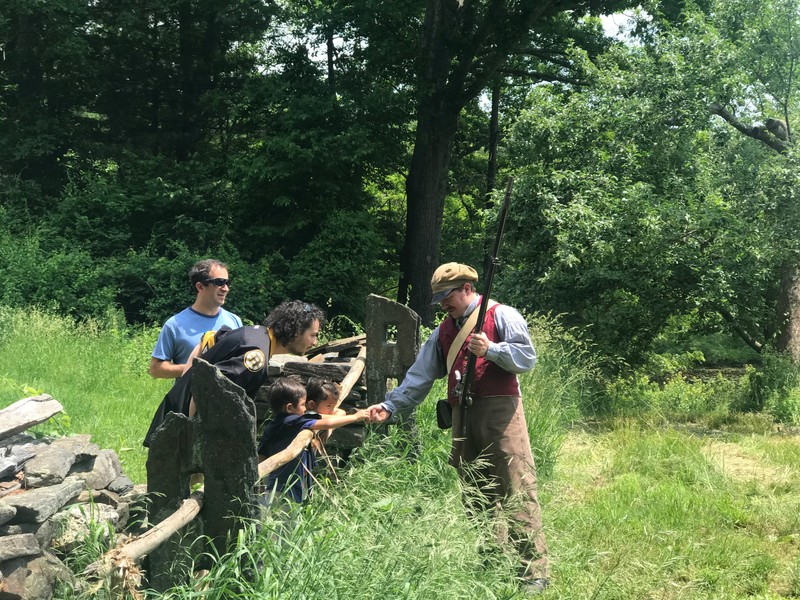 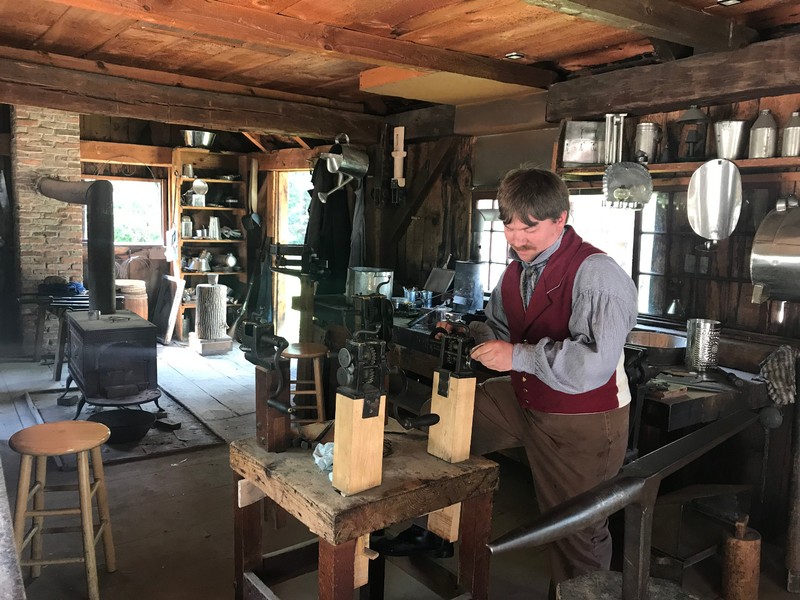 We stopped briefly at Dinosaur Footprints Reservation near Holyoke, Massachusetts. The small park is adjacent to Route 5 and it only takes a few minutes to reach the ancient tracks left there millions of years ago. We didn't build up the kids' expectations, otherwise they probably would have been disappointed by the shallow, weathered impressions in the rocks. Honestly, if I had walked through the area without knowing the footprints were there I probably would have missed them. Fortunately, the kids are still young enough that I can still excite them by leaping around and imitating a dinosaur tromping merrily across the landscape. Cleo was curious how the dinosaurs crossed the highway, and was flabbergasted when I explained that when these footprints were made there were no highways, no cars, and no people. 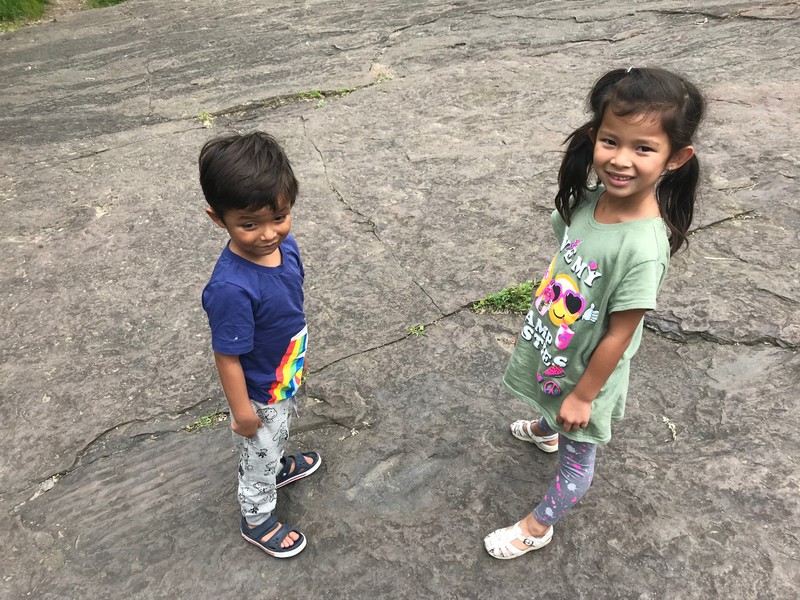 The next stop on our northward route was the town of Shelburne Falls, which had a couple of unusual scenic attractions. The Bridge of Flowers was created all the way back in 1929, which is an amazing lifespan for a landscaping project. The peaceful path across the bridge lined on either side with beautiful plants and flowers is a testimony to humanity's endless power of creativity. It's unfortunate that we haven't found a way in this country to reclaim more of the industrial eyesores that dot the landscape. 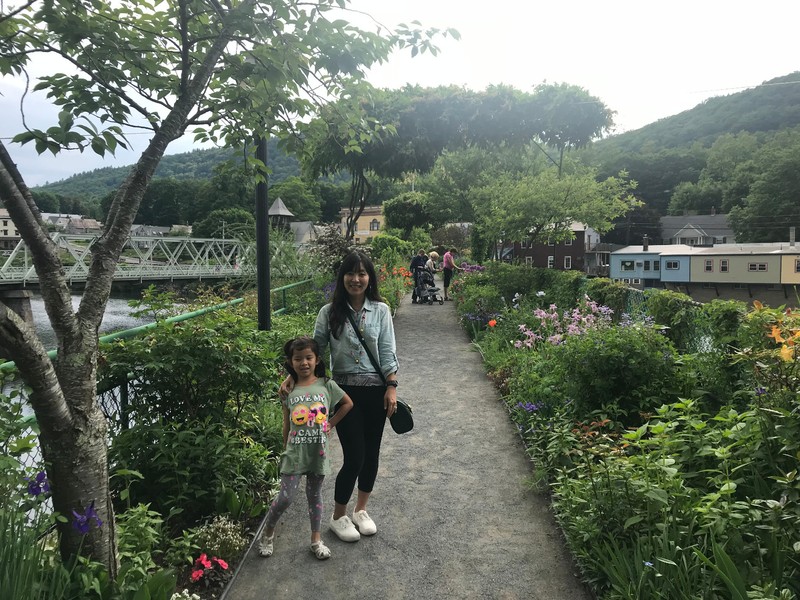 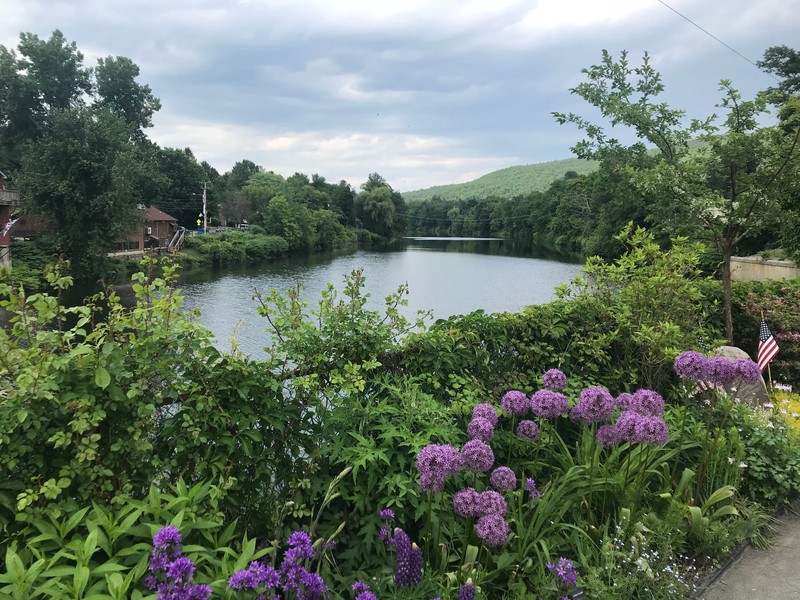 Just a few blocks from the Bridge of Flowers is a geological formation known as Glacial Potholes. It's a big hunk of metamorphic rock filled with holes and depressions of various sizes that were formed thousands of years ago. Interestingly, the potholes aren't directly related to glacial activity but rather to erosion by water currents. We missed the turnoff to the overlook so we didn't see the potholes themselves, although there are lots of pictures in the link. Instead we found ourselves down at the riverbank with views of Salmon Falls, which descends into the pothole area, and the little hydroelectric plant that generates some of the electric power for the area. 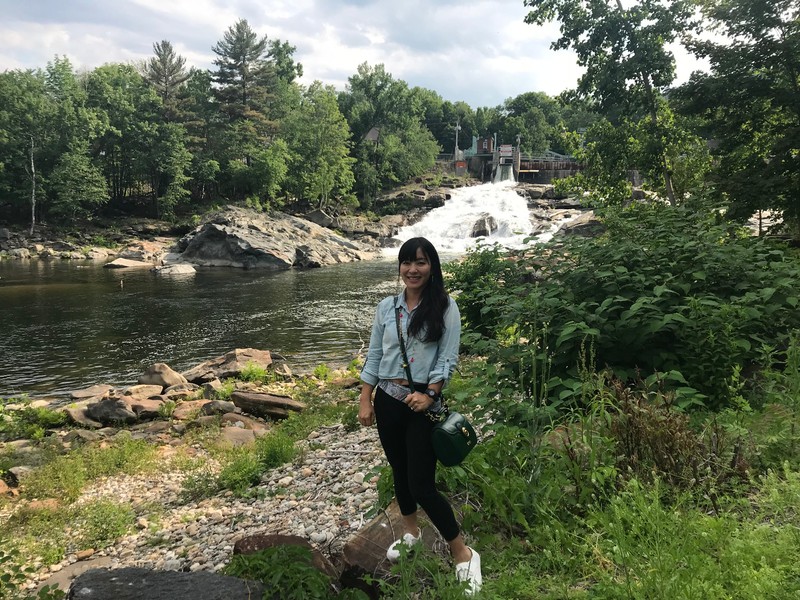 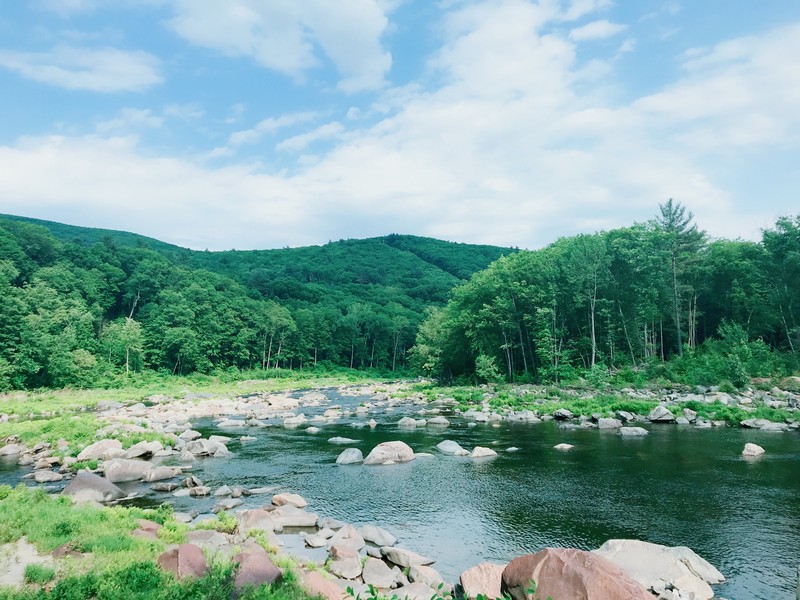 Not long after that we crossed the border into Vermont and rolled into Brattleboro. Usually we don't meet the hosts at our Airbnbs since we prefer the flexibility of checking in and out whenever we want, but this was one of those rare cases where we got a personal welcome. Our apartment was on the third floor, and our hosts lived below us on the second. On the first floor they ran an art gallery and a catering business. We settled in and then headed to dinner at Three Stones, a local restaurant that served highly-recommended traditional Mayan cuisine. Even at six PM, we had to have our dinner at the bar but the delicious food was well worth the minor inconvenience. 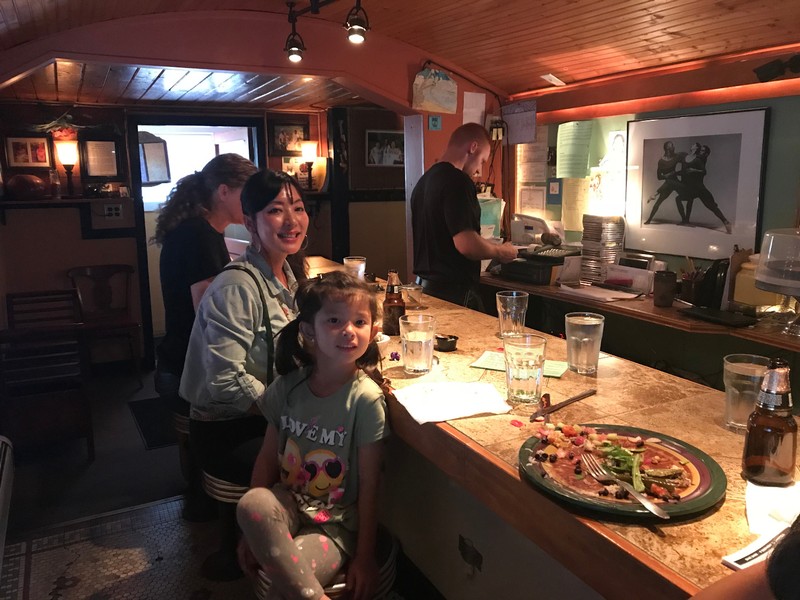 We began the next day at the Brattleboro Farmers Market, which was our main reason for stopping in the town overnight. It was a good-sized farmers market with a wide variety of prepared dishes, artisanal foods, and crafts. It was our first experience with the wide variety of Vermont cheeses and the multiplicity of products that can be made from maple syrup, including liqueur. There was a huge sandbox as well to keep the kids out of our hair while we examined every stall. 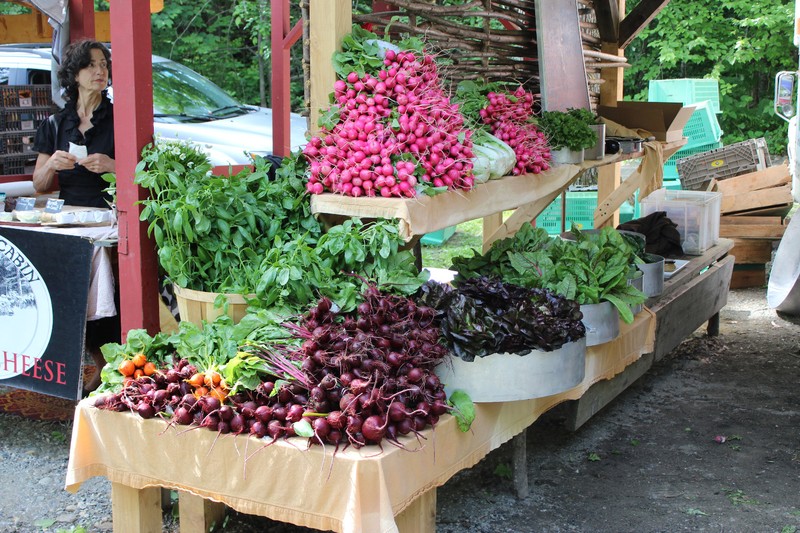 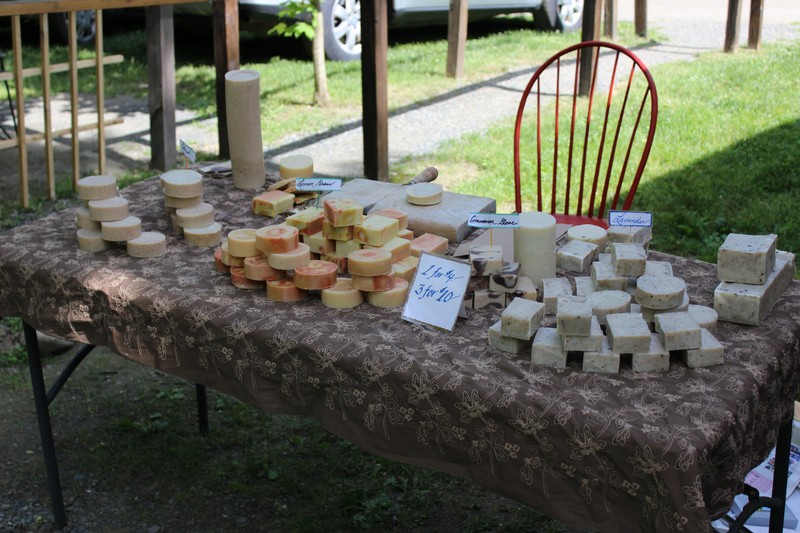 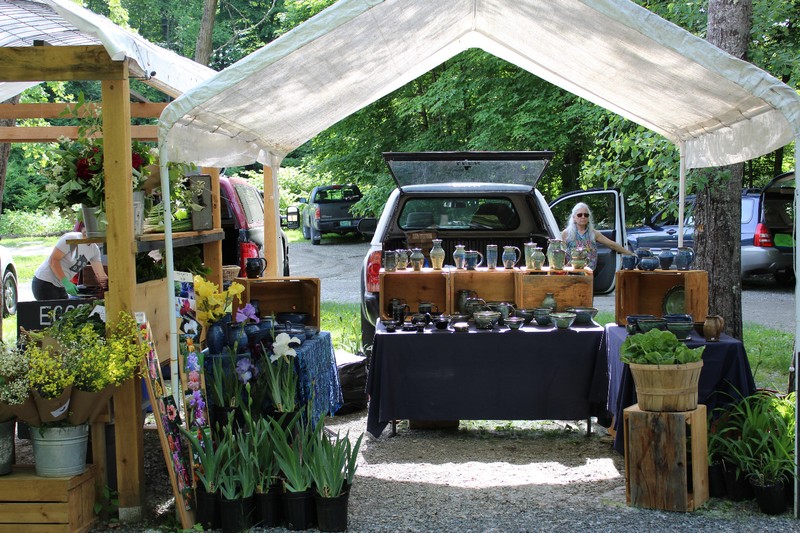 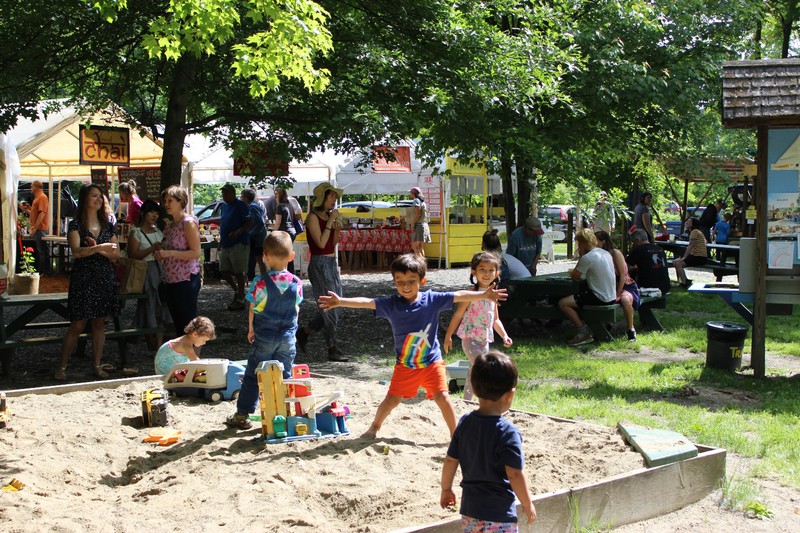 Just outside Brattleboro is the Robb Family Farm, which was established more than a hundred years ago and is currently operated by the fifth generation of descendants. The farm currently focuses almost exclusively on producing maple syrup without many of the recent technological advances that have spurred output but, in their opinion, at the expense of quality. The patriarch of the family guided us around the operation, from the tanks that receive the sap directly from taps in the maple trees to their shiny new evaporator. 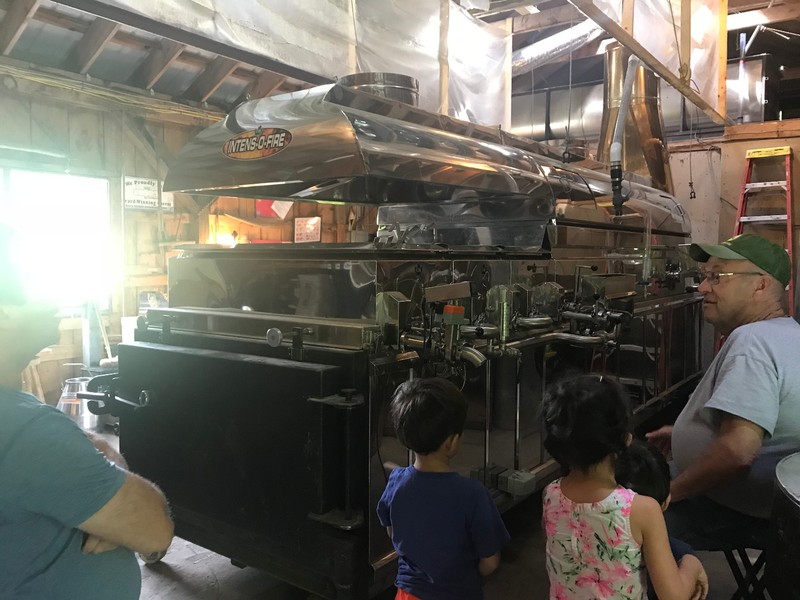 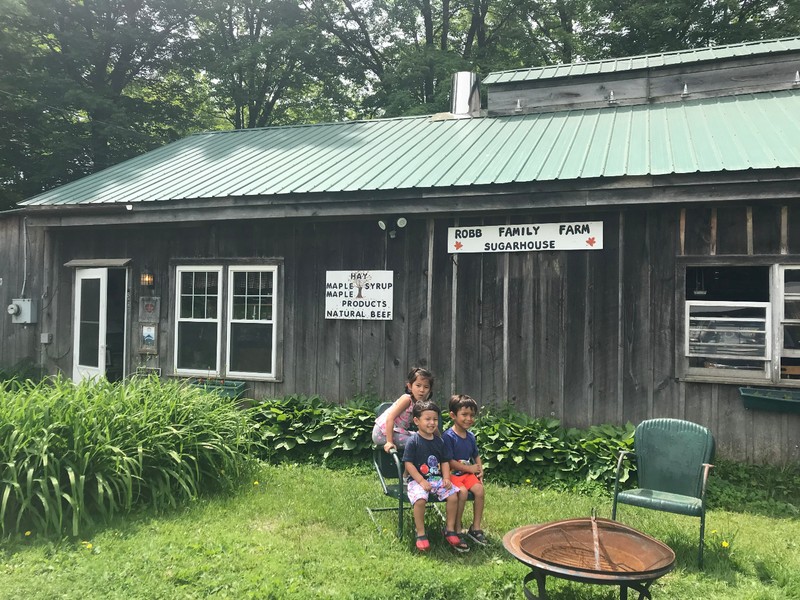 Next stop was Grafton Village Cheese, an enormous cheese store where they manufacture a large variety of their own cheddars. There's an observation deck for the cheesemaking operation but there wasn't much happening on a Saturday. The kids were fascinated by the free samples and I kept having to chase them around the store to make sure they were using the toothpicks instead of grabbing the cheese with their fingers. We bought some blue cheese and a couple of different kinds of cheddar. The shop felt like a temple dedicated to the worship of cheese. 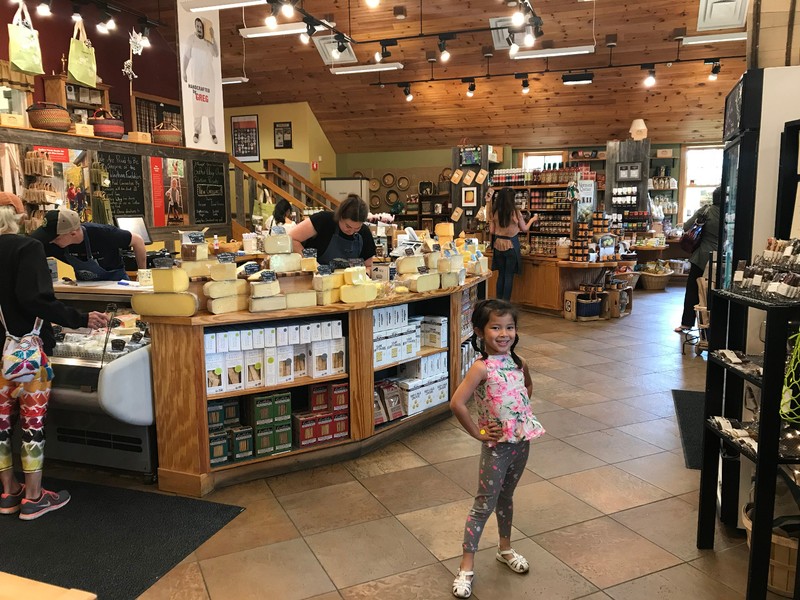 On the way out of Brattleboro for good we stopped at a casual restaurant where the West River flows into the larger Connecticut River. The food and mojitos were forgettable, but there was a nice view of the little lake created by the confluence. Someone had installed a sculpture of a sea monster in the middle of the lake that twisted slightly in the wind and appeared to be moving against the current, and for a while we had the kids thinking it was the real thing. 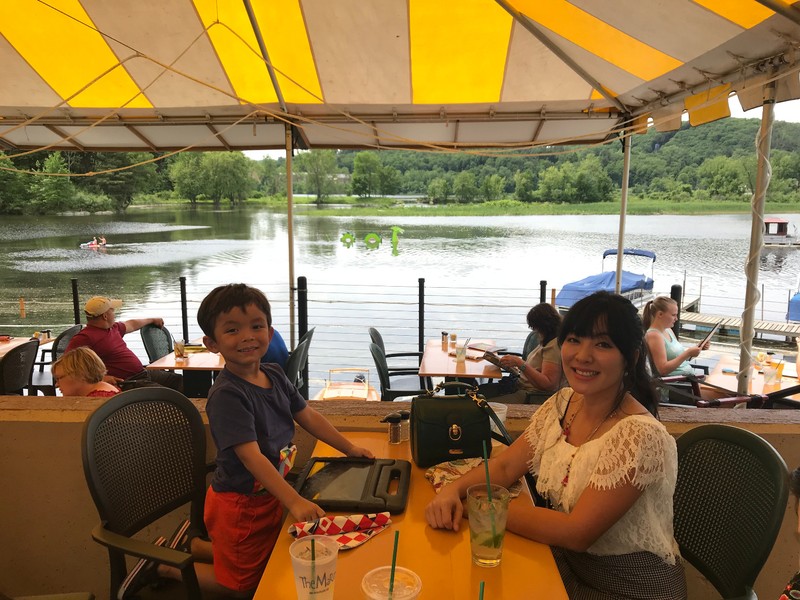 A few miles north of Brattleboro we stopped in the famously quaint town of Newfane to admire the two hundred year old buildings in the village center. A lady saw me taking photographs in the green and handed me a pamphlet explaining the history of each building. Vermont is like that. 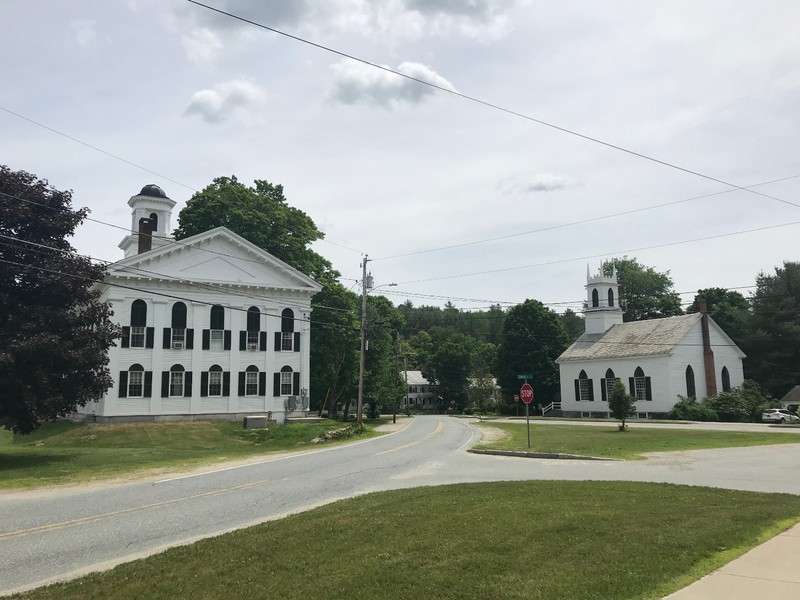 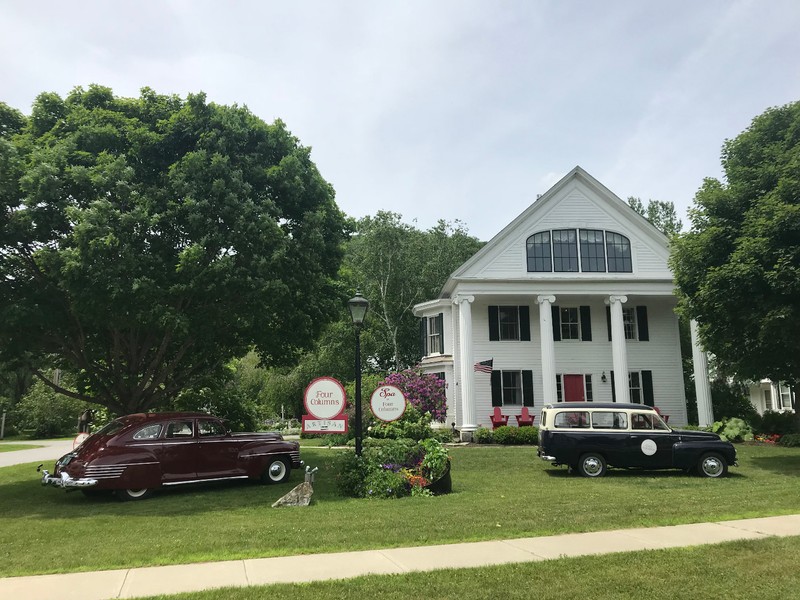 Our last stopover of the day was the beloved tourist trap Vermont Country Store in Weston. Aside from the vast array of Vermont food products and locally made clothing and crafts, there was a large selection of old-fashioned games that fascinated the kids. They spent a good ten minutes just trying out the Whoopee Cushions. 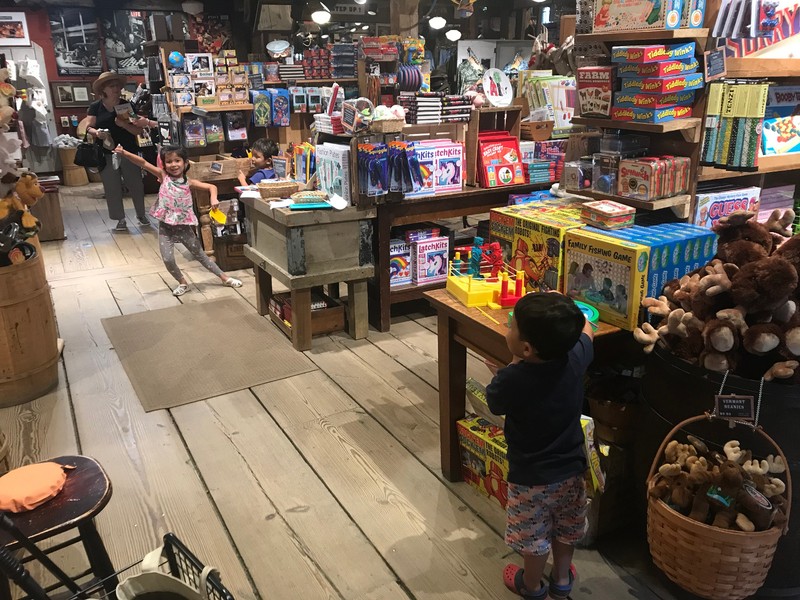 Thanks to our early start on the day it was still early in the evening when we reached Woodstock, our overnight destination in central Vermont.