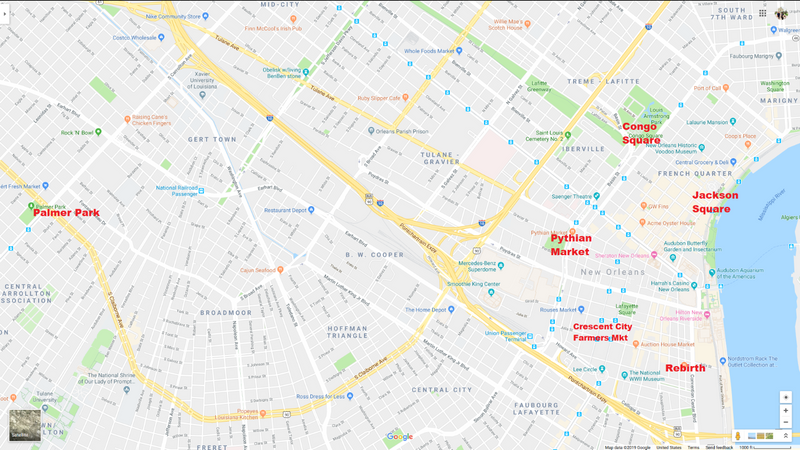 When we travel to larger American cities, we're always keen to check out their farmers market game. So far the best we've encountered have been in Portland, Oregon and in Los Angeles. On Saturday morning we headed to the Crescent City Farmers Market, which operates in different parts of the city on different days of the week. Saturday's edition was held in a parking lot in the Central Business District, not far from the Auction House Market where we'd had brunch the previous day. The vibe was good and we picked up a basket of plump strawberries, but we were a little disappointed at the size of the market and the lack of unusual products. We might have been better off at the market across the river in Gretna, but we only had time for one that morning. 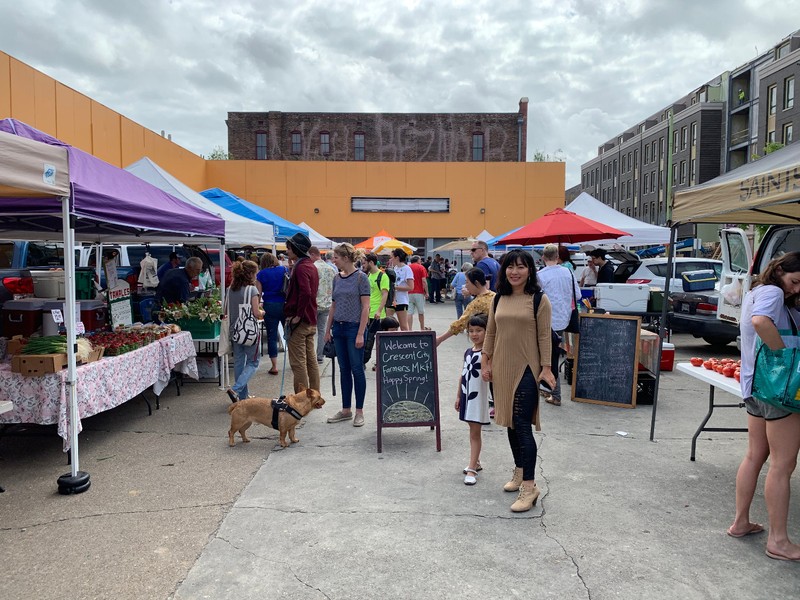 Our final food hall was also in the Central Business District. Pythian Market opened in the ground floor of the historic Pythian Building in 2018. The food selection was diverse with a number of traditional New Orleans outlets as well as cuisine from far-flung locations. We focused on the Colombian and Vietnamese kiosks and ate quite well. There was a jazz trio livening up the atmosphere in front of an incongruous Christmas tree with Mardi Gras decorations. 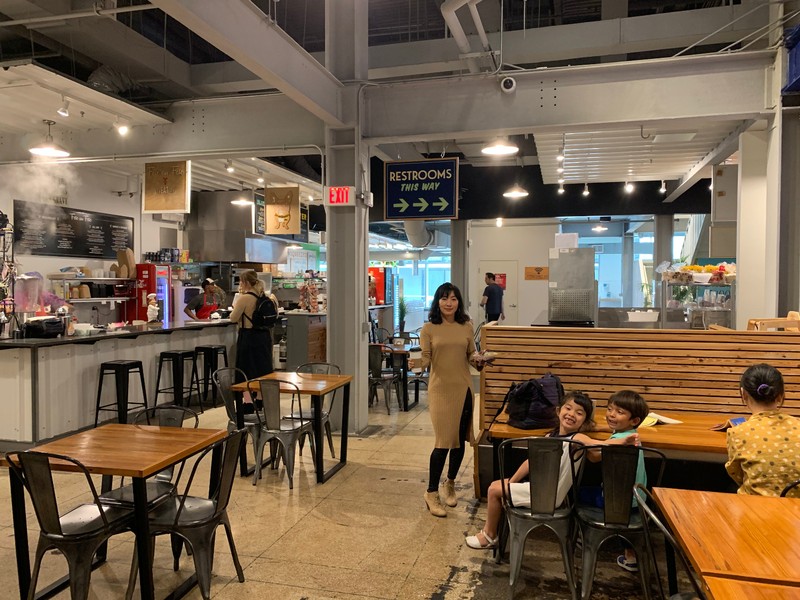 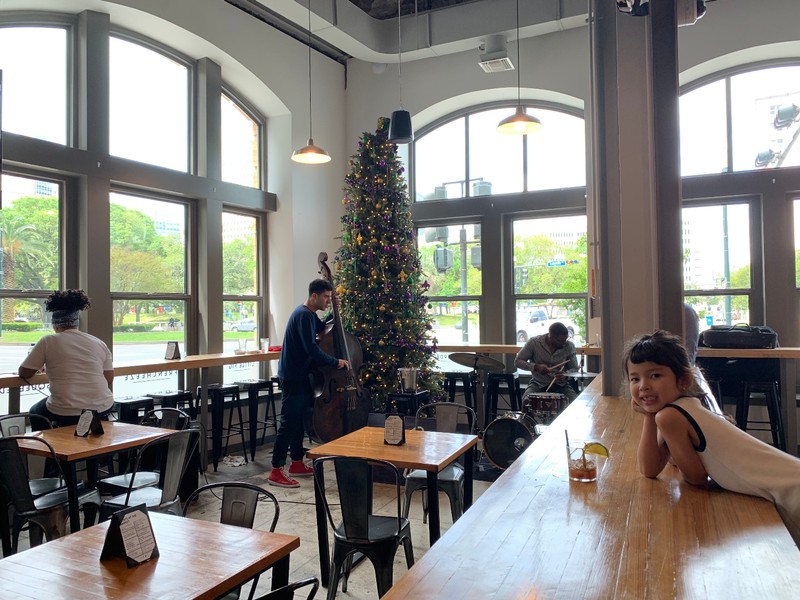 I'd found a couple of special events in New Orleans that weekend. On the last Saturday of every month, the New Orleans Arts Market is held in Palmer Park in the western part of the city. This turned out to be an impressively large exhibition of artwork, photography and crafts close to the park's playground, which gave us an opportunity to peruse some of the stalls more intently without having to constantly make sure the kids weren't about to knock over the displays. We saw a lot of original and creative work in a pleasant outdoor environment. 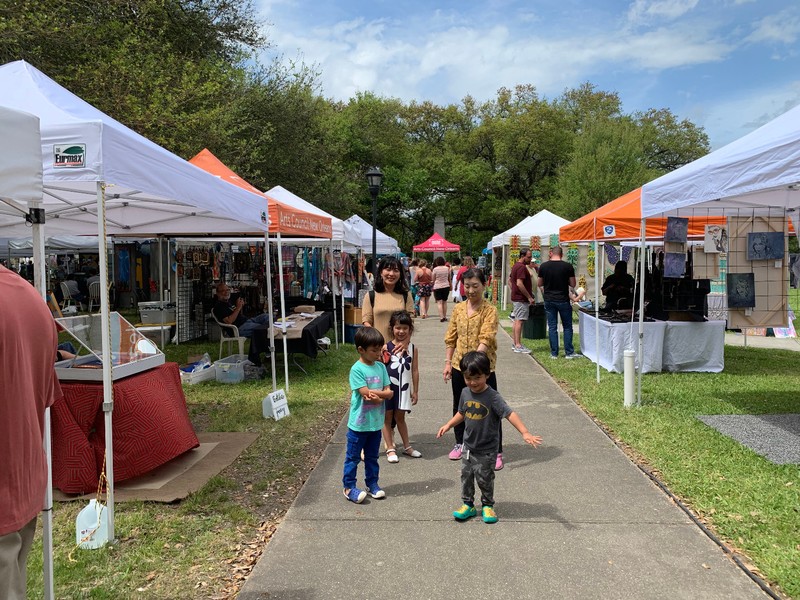 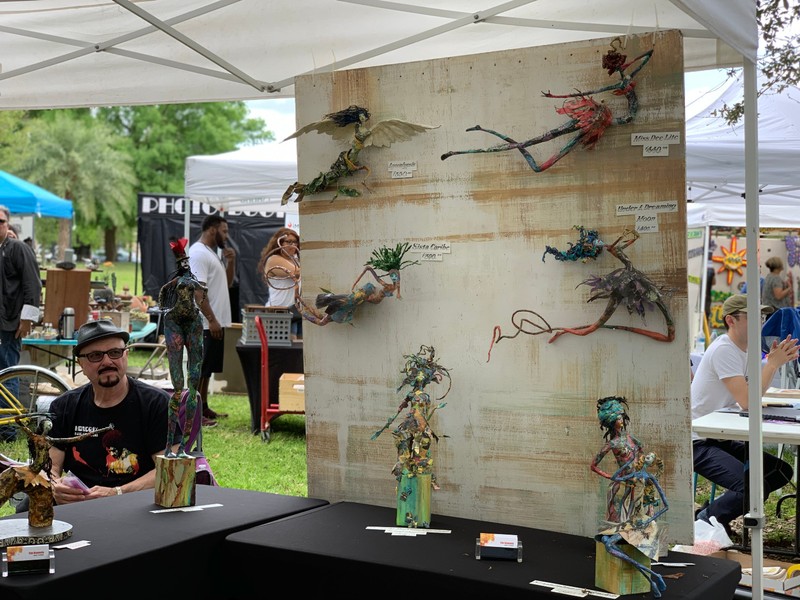 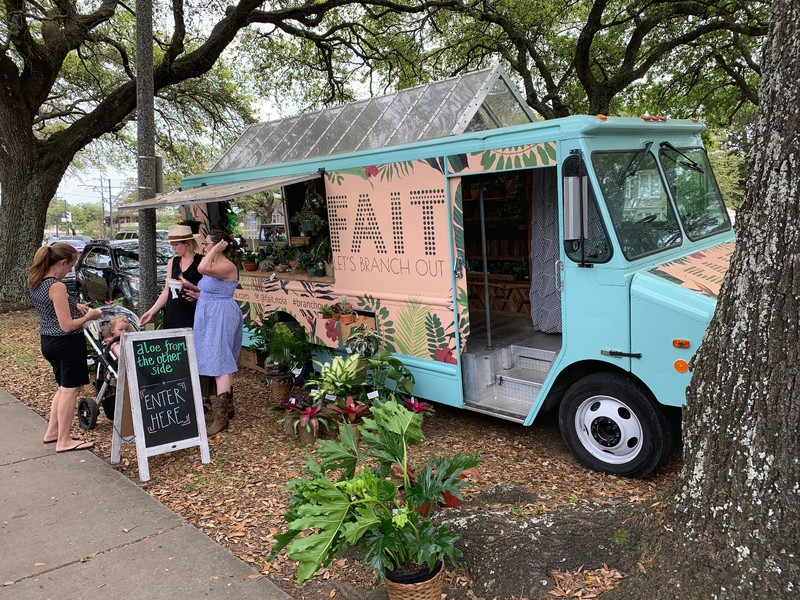 Our next event was the Congo Square Rhythms Festival in Louis Armstrong Park just north of the French Quarter. This annual celebration of African and soul music takes place in the part of the park that was a traditional meeting place for slaves and free blacks in the 19th century. It's a beautiful park with duck ponds and fountains that shoot water straight up into the air. Around the stage numerous kiosks were set up to sell clothes and crafts along with refreshments. 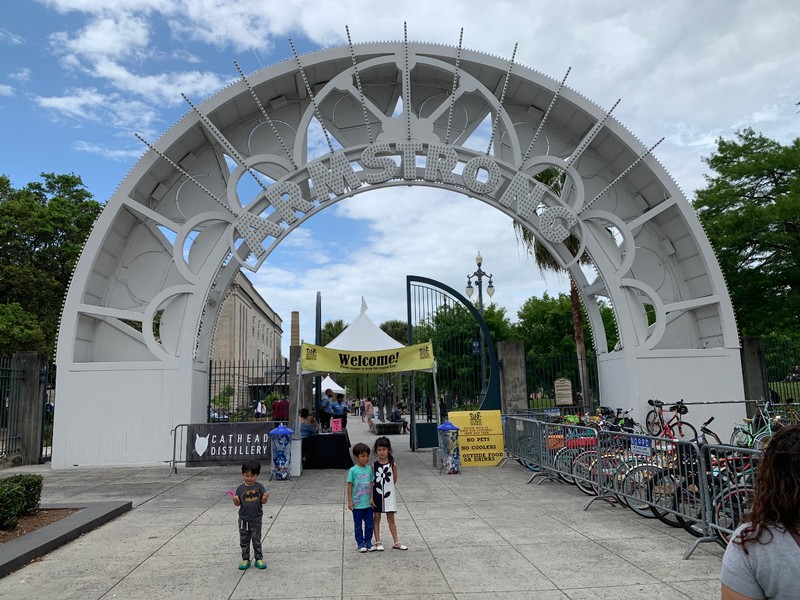 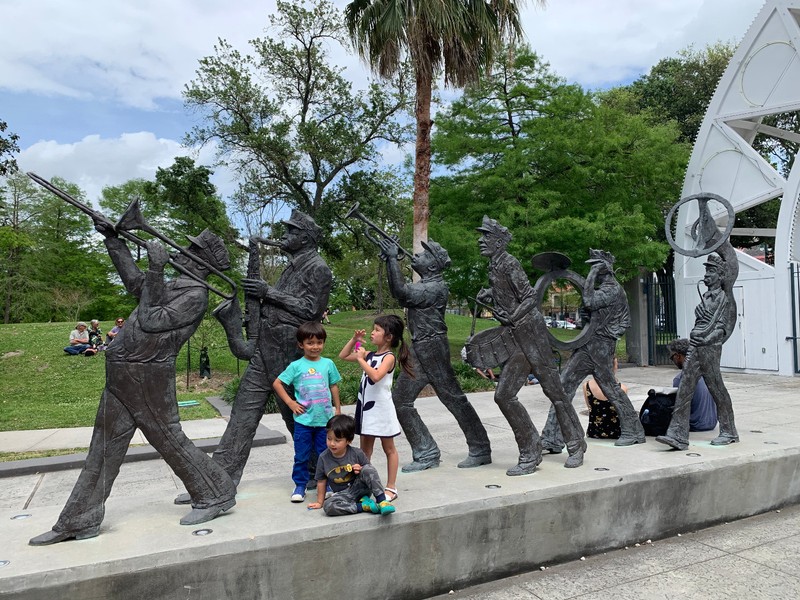 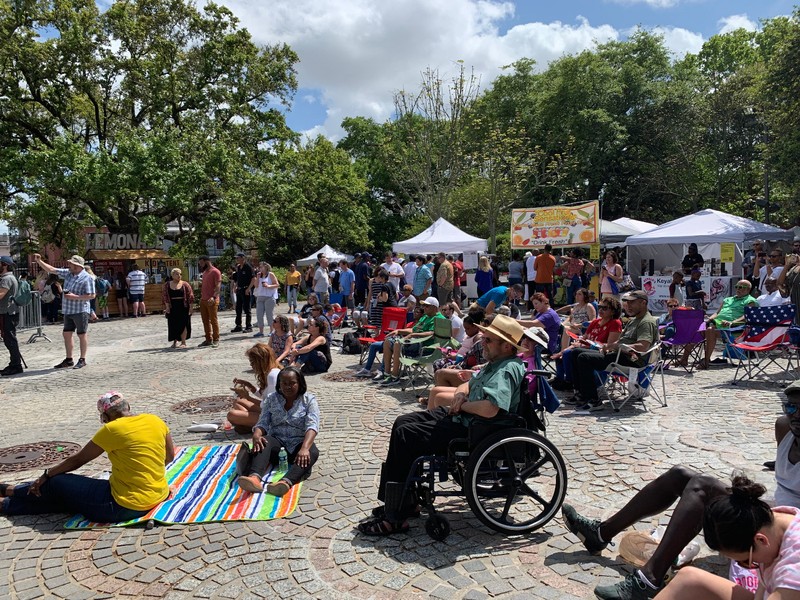 After the festival we got back in the car and drove around the French Quarter, admiring the wrought-iron balconies and colorful shutters of the many Creole townhouses in the neighborhood. As we grew closer to the river, the traffic became more congested and we realized we had reached the inland side of Jackson Square. We had done pretty well avoiding the touristy aspects of New Orleans so far but there's no other spot as emblematic of the city and the energy felt good, so we found a rather miraculous parking spot and ventured forth on foot. It seemed like at least half the people visiting the city must have been crammed into the few blocks around Jackson Square. The crowds were dense and the smell from the carriage horses was overwhelming, but it was all worth it once we got a view of the immaculate St. Louis Cathedral. In the grassy square in front of the cathedral is the iconic bronze statue of Andrew Jackson on his rearing horse and some beautiful multi-trunked Mediterranean fan palms. 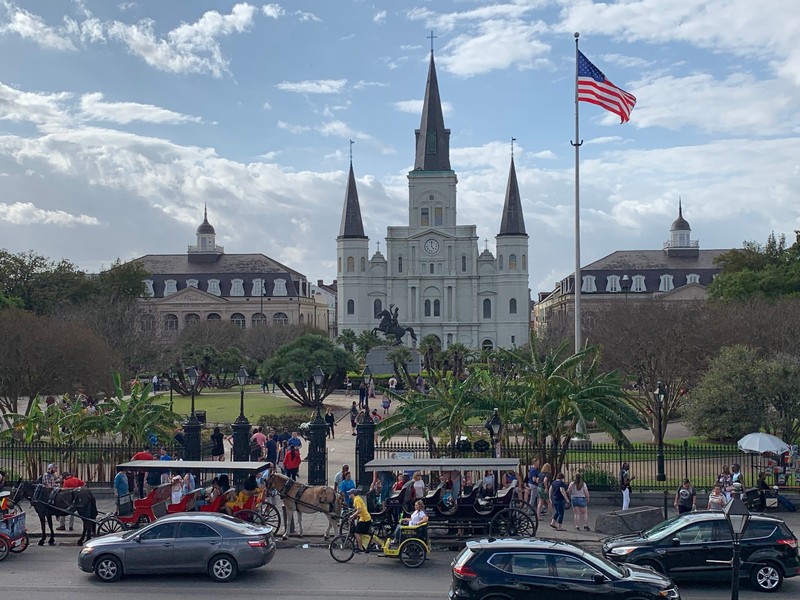 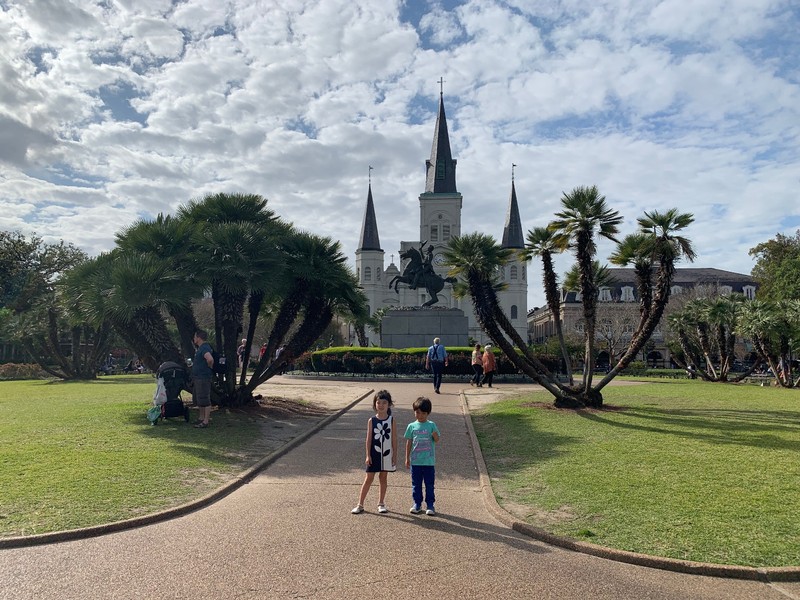 On the pedestrian street between the cathedral and the park were an array of artists, caricaturists, and fortune tellers. A crowd was gathered around a breakdancing crew and we watched them joke around and perform athletic feats for a while.

That evening we ate at Restaurant Rebirth in the Warehouse District. It was a little more interesting than GW Fins had been the previous night but still unfortunately not the awesome dining experience we had hoped for. It was surprising we hadn't done so well with the restaurants as on our last trip to New Orleans in 2011 we'd had four amazing dinners in four nights. In a way, that was our first family trip ever as Mei Ling was unknowingly almost a month pregnant with Cleo. As the pictures show, a lot has changed since then. Three kids, about twenty-five amazing trips, and much better iPhone cameras. It had been great to return to New Orleans and relive those amazing memories from when we were still a young freewheeling couple with the world at our doorstep, but there's no way on Earth I would trade it for what we have now. 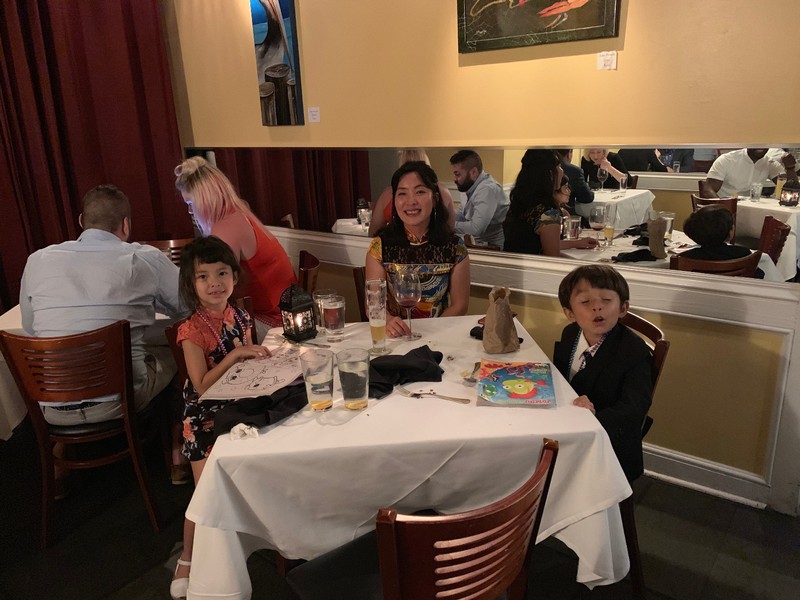 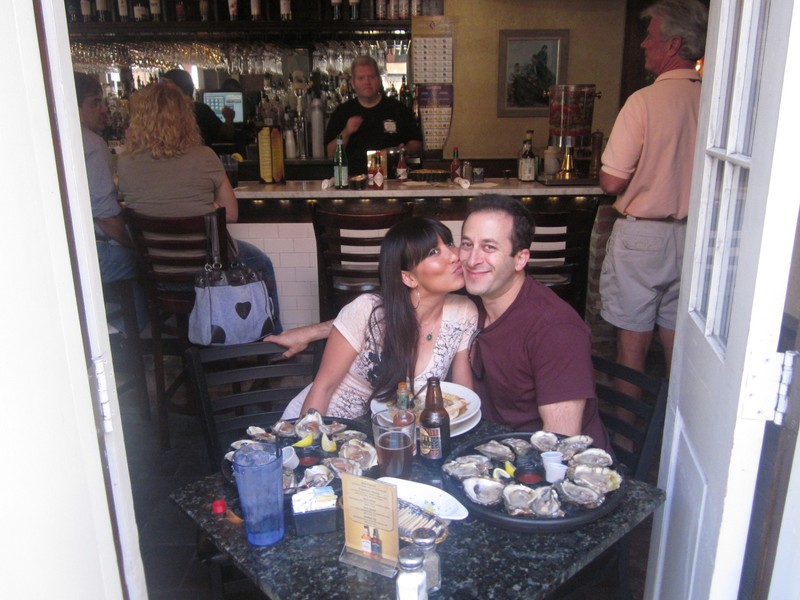 On our last morning we all woke up shivering. I thought someone had turned on the AC in the middle of the night, but when I looked outside the skies were grey and a steady drizzle was pattering against the windows. Outside, we realized the temperature had plunged into the 50's from the high 70's the previous day. This didn't trouble us one bit since our only remaining task was to get to the airport and get on our plane back to Miami. I couldn't help but feel a bit of traveler's schadenfreude knowing that if the weather had gone sour a day earlier our visit to New Orleans would have been ruined. We'd gambled on cutting this segment back to two days in order to see Mississippi and we'd gotten lucky. Any residual grudge I had against the gods of travel over the episode with Spenser was now forgiven.