Once we were done with Tianjin we didn't have any great ideas for the remaining five days of our vacation. Beijing was about 100 degrees and hadn't been as fun as we'd expected anyway. I couldn't face another flight just for a few days in another part of China. I studied the map and the only other major city I saw within easy train distance was Tangshan, which I knew very little about. However, a city of more than two million people was certainly going to have markets, good restaurants, and some kind of attractions. When I asked Mei Ling about Tangshan, she told me that one of her close friends from Miami was there for the summer and that sealed the deal. Tangshan would be our final stop of the trip.

Tangshan is one of the largest cities in Hebei, a horseshoe-shaped province that surrounds the municipalities of Beijing and Tianjin. Hebei doesn't have any defining characteristics because it's an artificial province that was carved from different areas around the capital. If anything, Hebei is known for manufacturing and mining which is the reason for its dubious distinction as China's most polluted province. One mysterious chunk of Hebei floats between Beijing and Tianjin but is completely separated from the rest of the province. This exclave contains the cities of Sanhe, Dachang, and Xianghe and has a large population of Hui Muslims. There's virtually nothing in the English language internet that describes this region, except for a couple of stubs on Wikipedia. It may be that there's absolutely nothing in this area worthy of discussion, but I find the complete absence of any information somewhat odd. 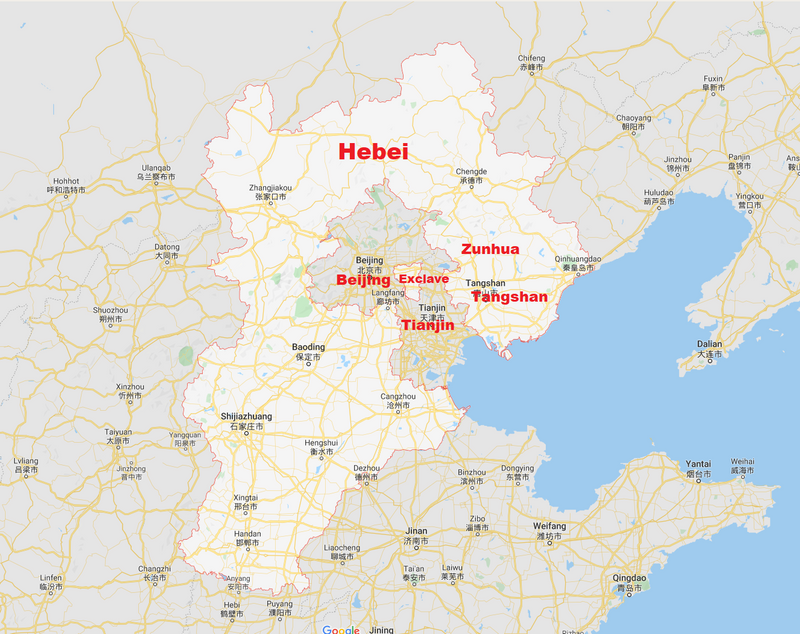 Mei Ling's friend insisted on sending a driver all the way to Tianjin to pick us up. I followed our progress using my Google Maps GPS and soon realized that we weren't on a course to Tangshan at all, but rather headed far north of the city. That's when Mei Ling told me that we were actually going to a smaller town called Zunhua about 50 miles north of Tangshan. That's not Tangshan, I told her. It's in Tangshan prefecture, she answered. That's kind of how things go when we're in China. I didn't have high expectations for Zunhua, but the city was even worse than I expected. If Mei Ling's hometown of Mudanjiang is the Cleveland of China, Zunhua is Newark. A thick haze of pollution hung over the entire city, which seemed to be entirely composed of grim blocks of Soviet-style housing. At least the hotel that we'd been put up in was comfortable and relatively modern. 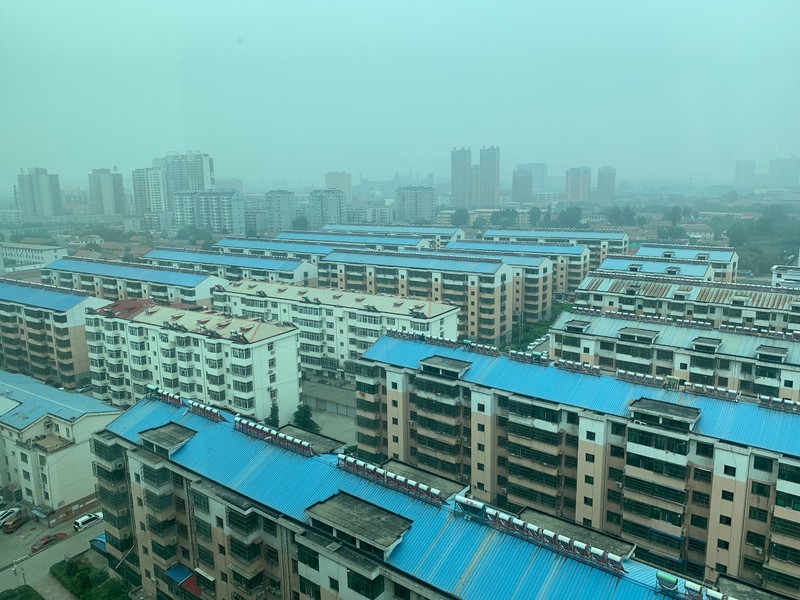 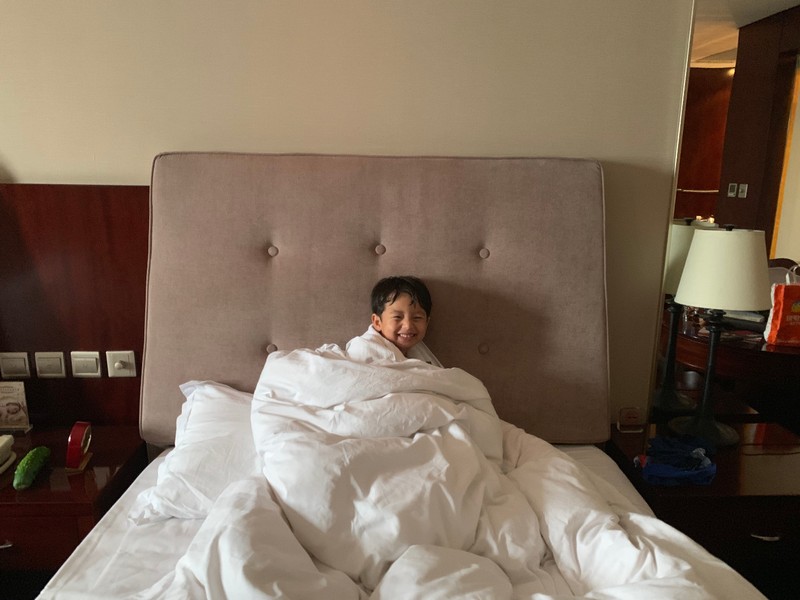 Mei Ling's friends treated us to yet another banquet which ended in another birthday party for Spenser. One of the more unusual dishes was a Barbie dressed in a flowing kimono of raw meat for the hot pot. As usual every effort was made to get me drunk on the grain liquor baijiu which I raised cheerfully to my lips but didn't imbibe. In China it's a big thing to get the guest of honor wasted at dinner, but unfortunately for my hosts I haven't let myself get intoxicated for many, many years and I wasn't about to start now in front of my three kids for the sake of politeness. 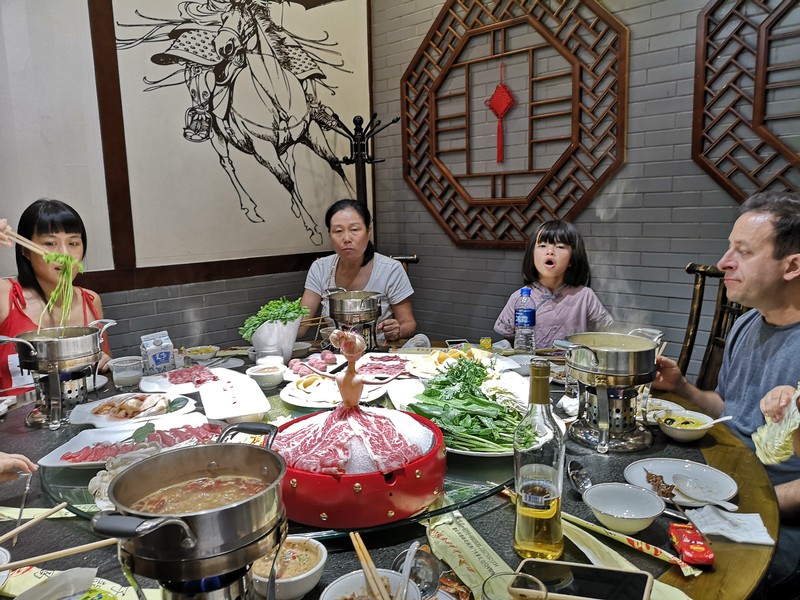 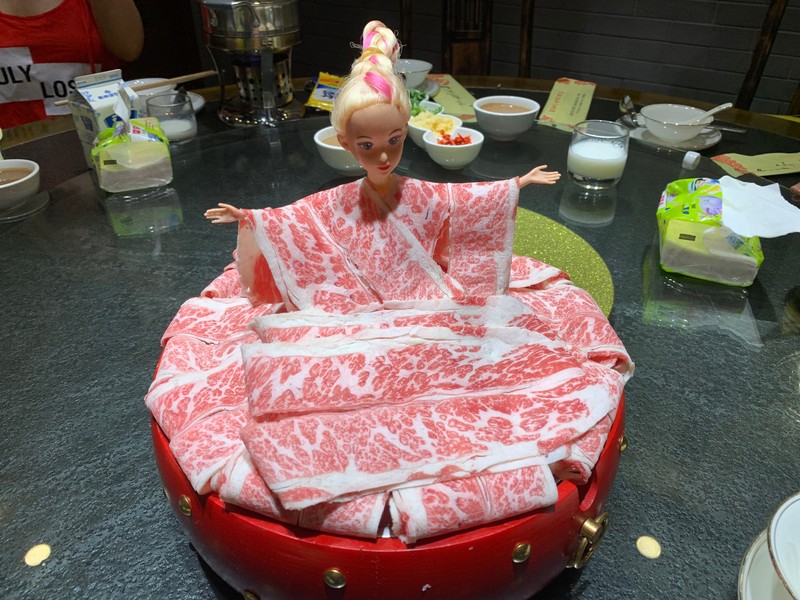 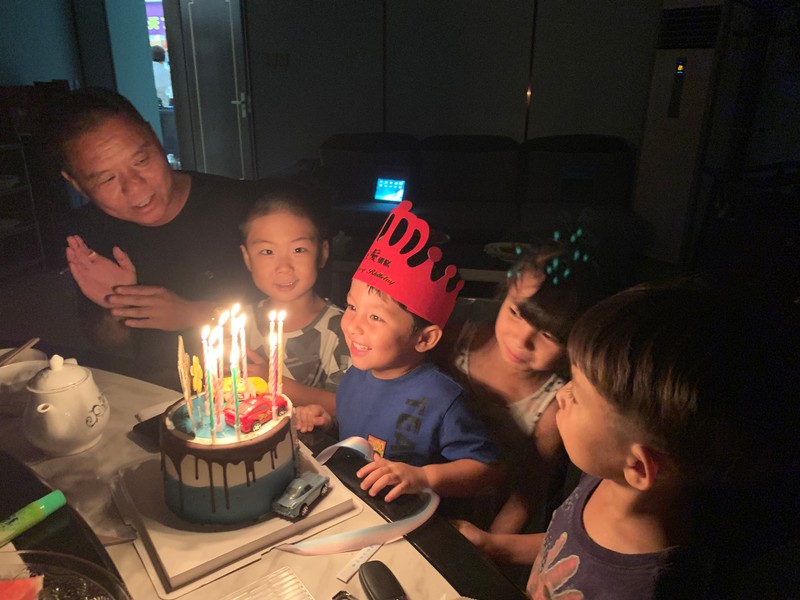 Across the street from our hotel was the community market which was fairly small and lacked any unusual items, but it was better than nothing. There were some live chickens and rabbits and a salad bar. By this point I'd learned to stop the salad lady from dumping the heaping spoonful of salt onto my selections before she tossed it. 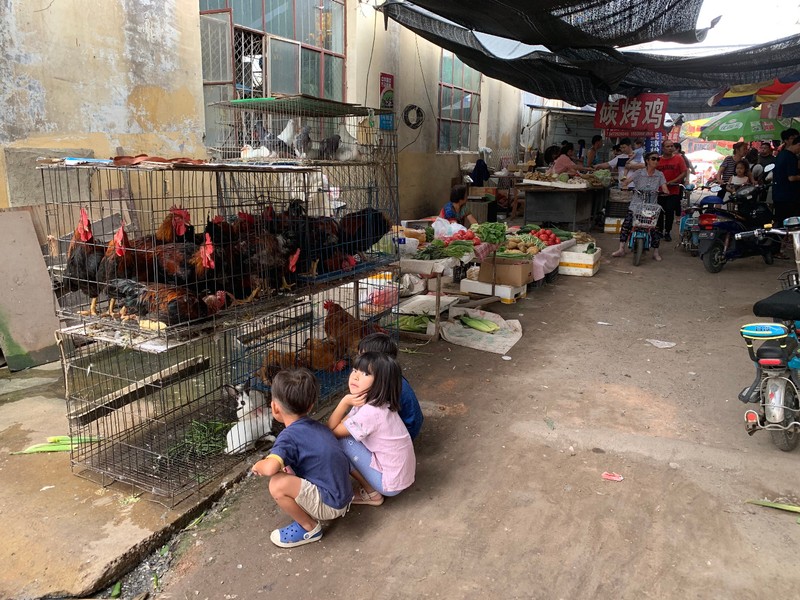 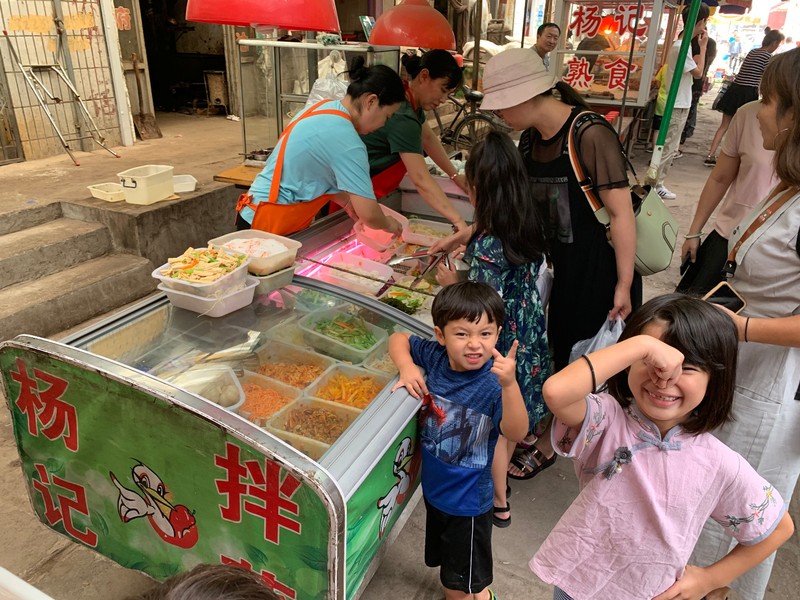 Our hosts did a good job of keeping the kids entertained despite the paucity of attractions in Zunhua. We spent one day at a hot spring and another at a creek where the kids caught tiny little minnows in nets. Evenings were occupied with multiple course dinners that lasted for hours. It was a very laid back and easy lifestyle with all our needs being attended to, but I missed the excitement of our stops in Dalian and Osaka. Most of us were starting to get coughs and runny noses after the first day as well, and I wondered if it was just a cold or something to do with the relentless grey smog that hovered permanently over the city. 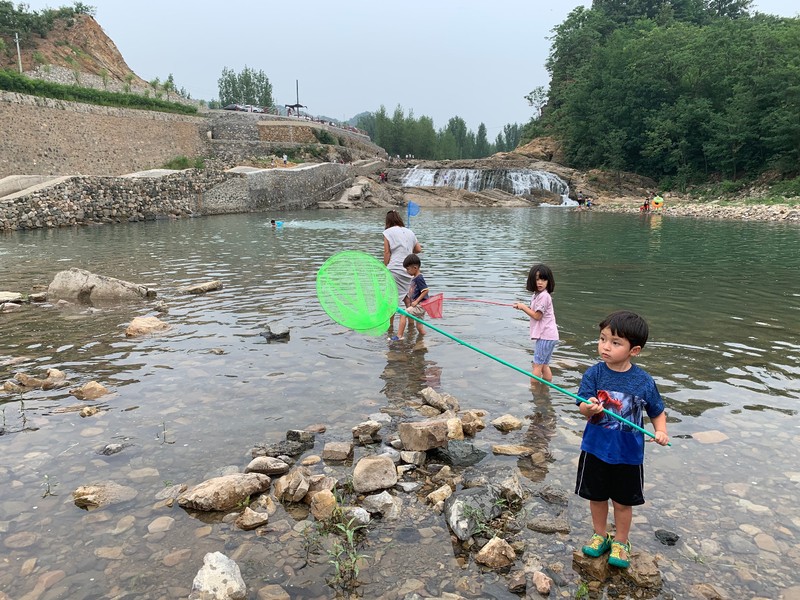 We did make it to Tangshan for one day which for me was the highlight of our visit to Hebei. On the outskirts of town we visited an enormous food hall and conference center that was something of a domestic tourist trap. On the ground floor there were numerous food preparation stations selling various regional dishes. Upstairs was an Escheresque labyrinth of chambers containing exhibits, private dining areas, conference rooms, and even craft stations. The kids had a messy blast making clay figurines. The koi pond on the ground floor was packed with colorful and ravenous fish which allowed me another shot at fulfilling my fantasy of feeding them with chopsticks. 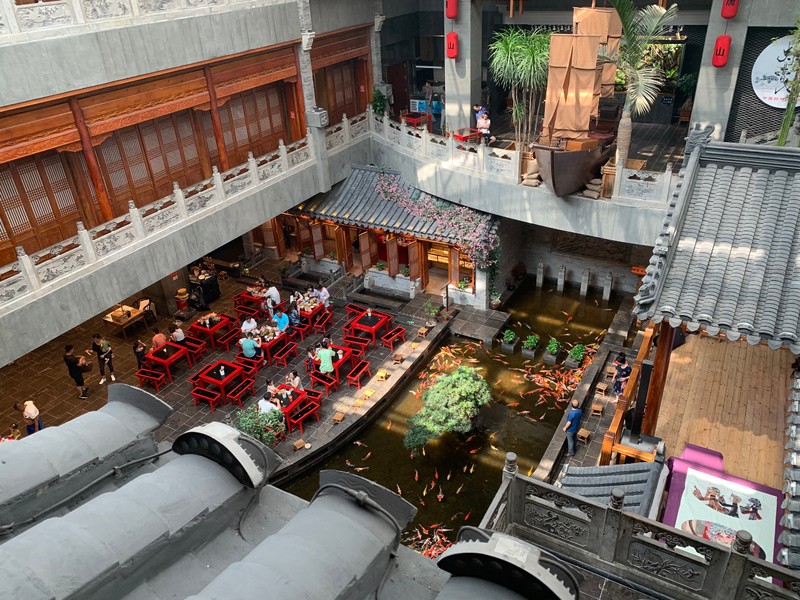 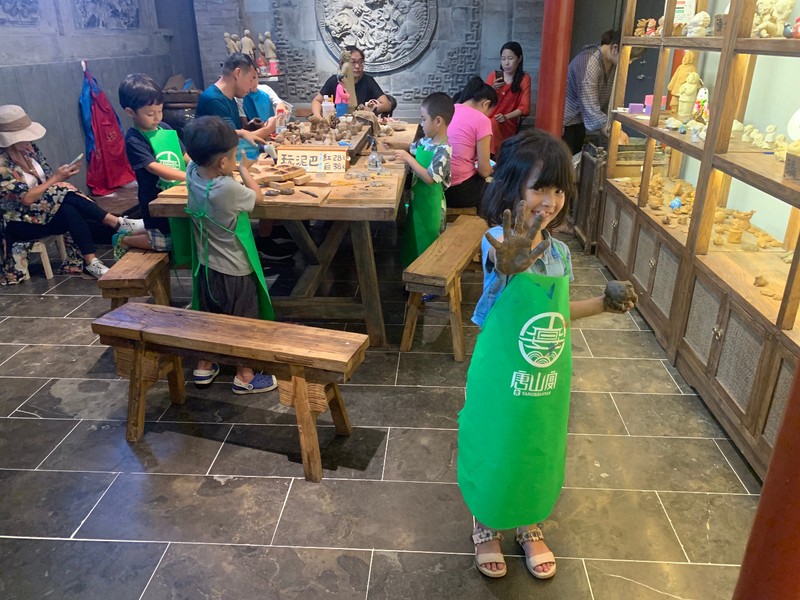 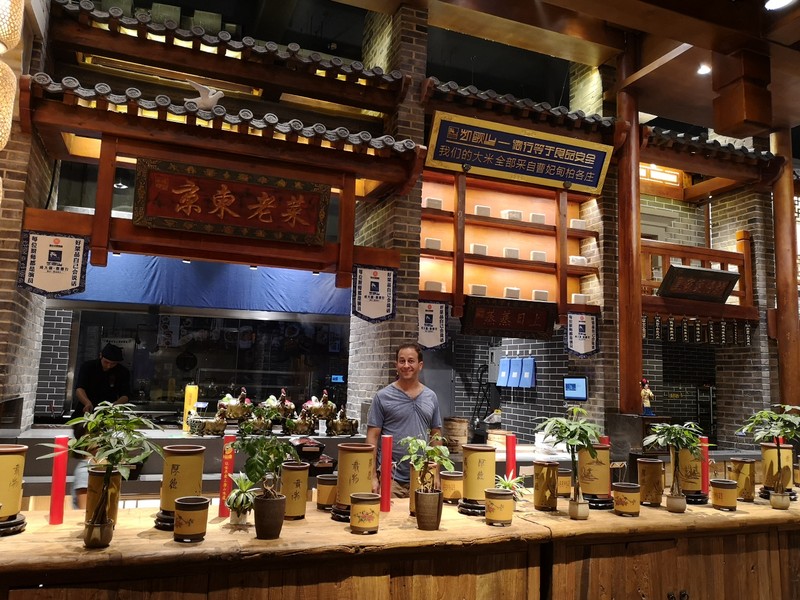 There's not much for travelers to see in Tangshan except for a grim memorial to the devastating earthquake of 1976 which killed a quarter of a million people. Instead we spent the evening at a large street market which was mostly dedicated to clothes and household goods but also contained a sizable and variegated food court. I realized this was my last chance to buy a Chinglish T-shirt on this trip and began to search all the vendors for one with the most random and inappropriate messages. The vendors were confused when I immediately rejected all the T-shirts they suggested for me because they weren't silly enough. The best one I'd seen the whole trip was a girl in Dalian whose shirt said "I've got stupid wrhen all over my face" but I wasn't lucky enough to find anything like that. I settled for one that claimed the brand "Burbeery" and had some incoherent nonsense about "Londineblamb" inscribed underneath. 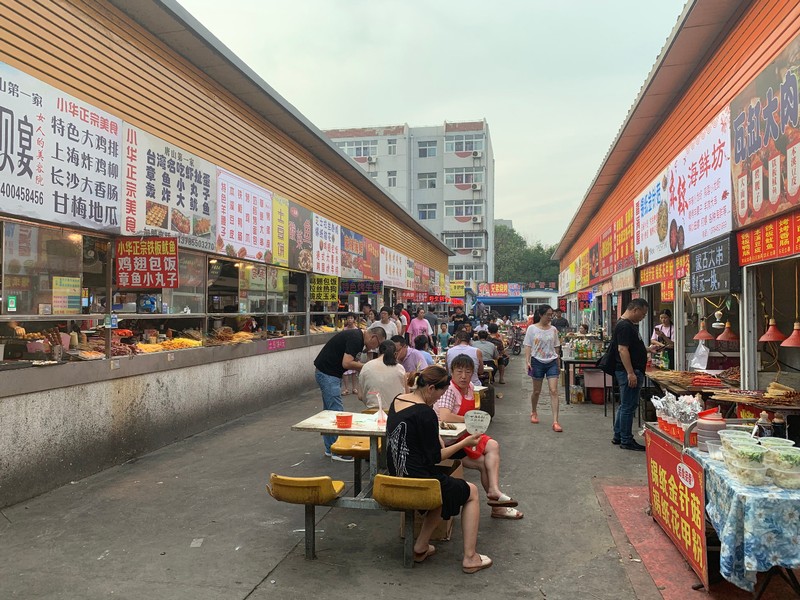 Our trip came to an end on an anticlimactic note, but it had still been a remarkable experience particularly with respect to Dalian and Osaka. Trying to base ourselves in Beijing had been a mistake - I had some notion that we would leave the bulk of our luggage behind and travel light to other cities but that proved impractical. On our next trip to China in 2021 we're hoping to spend five or six days in each of four southern provinces that we've never visited: Szechuan, Hunan, Guangxi, and Yunnan. Hopefully we'll be able to combine that with a two week stay in northern Vietnam. Of course, there's still a lot of time for those plans to change but I'm really looking forward to experiencing a different side of China with incredible mountains and landscape, mouthwatering cuisine, and diverse ethnic groups.

Posted by zzlangerhans 03:26 Archived in China

Thanks for sharing your remarkable experience...

You're very welcome, hope you enjoyed the read!