With a couple more days before we were due in Tianjin, we made an impromptu decision to spend the weekend with Mei Ling's friends at their family home on Chongming Island. Chongming is the largest of a group of islands that occupy the wide mouth of the mighty Yangtze River. 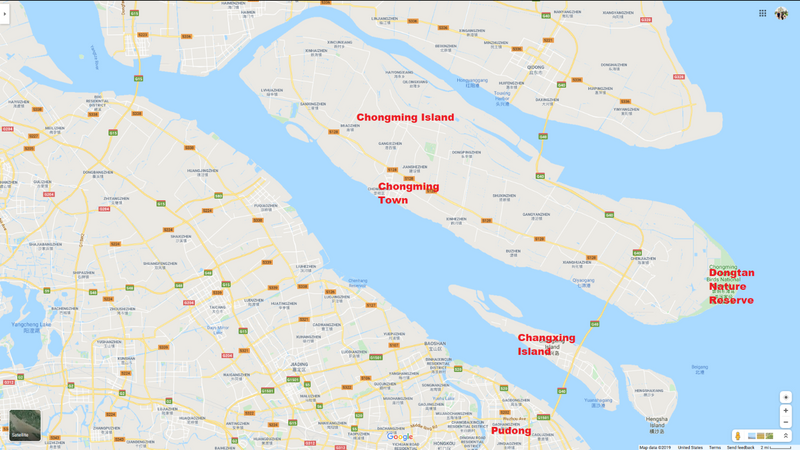 We took the metro from my brother's house almost an hour to get to the bus station in Pudong, from where we had a ninety minute bus trip to Chongming Island. We stayed in a very basic, local hotel which the kids loved because they had an old-fashioned miniature arcade game. 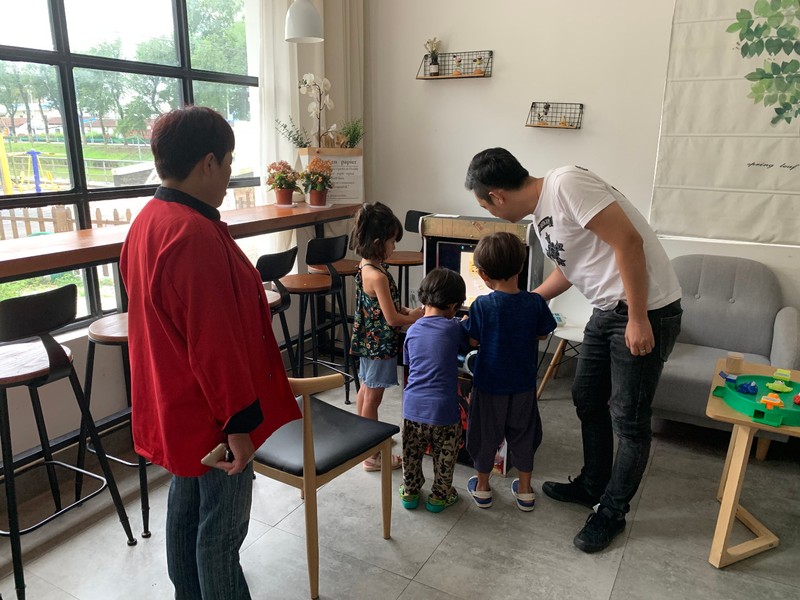 Almost all of Chongming Island is criss-crossed by wide canals. We walked alongside one to the center of town where the main market was still in progress in late afternoon. Unsurprisingly, much of the market was devoted to seafood although there was a sizable section for produce. One fisherman incongruously dressed in a sport jacket was gutting eels that were held in place on a long board by a nail through the head. A cheerful woman showed off her fish that was so fresh that the decapitated head was still gasping on the counter. 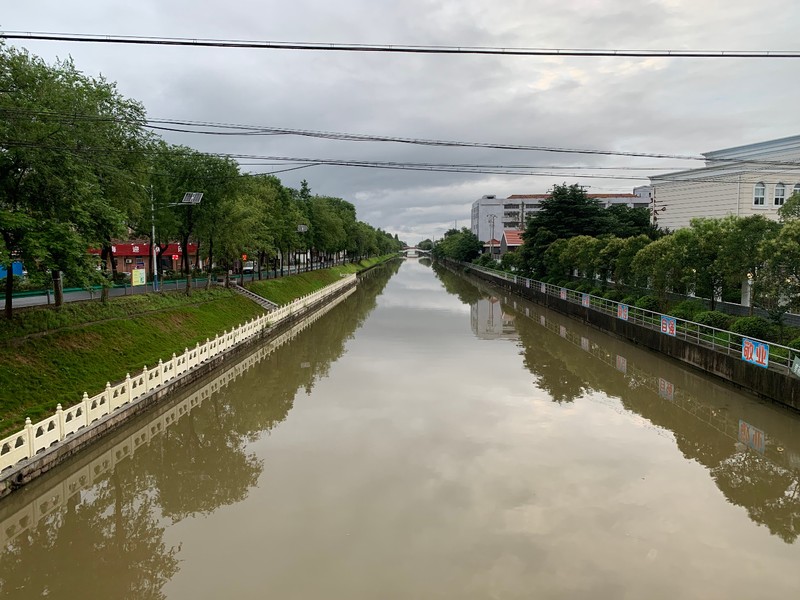 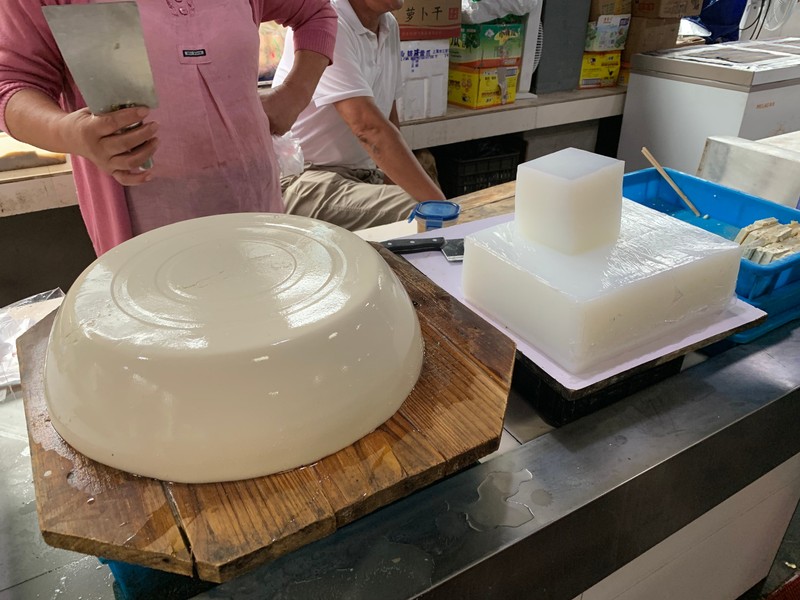 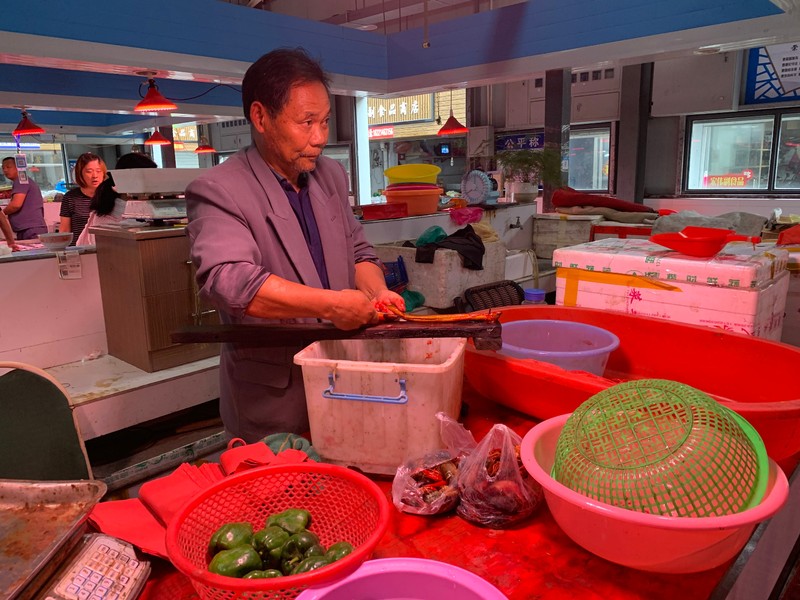 One of my favorite Chinese dishes that is impossible to find anywhere else is drunken shrimp. In fact, it's only popular in the areas directly to the west of Shanghai like Suzhou and Hangzhou. Live shrimp are marinated in wine and soy sauce to make them sluggish and then eaten alive. The strength of the wine determines how much the shrimp are moving when they are eaten. The first time I had drunken shrimp in Hangzhou the shrimp were so active that one actually jumped out of the bowl. The dish isn't just enjoyable for its bizarreness. The fresh taste and crunchiness of the small freshwater shrimp are complemented by the wine and the spices in the marinade. When we came across a basket of the shrimp at the market I decided the next best thing to a bowl of drunken shrimp was to try a raw shrimp without any seasoning at all. The texture was there but the flavor was very bland without the wine, so I decided to wait to find the dish in a restaurant rather than finish the basket.

As rural as it may seem, most of the residents of Chongming Island are quite wealthy. The homes are roomy and modern, and there are quite a number of elaborate mansions scattered around. Many of the homes come with a plot of farmland nearby that can be used to grow corn or watermelon, among other crops. Some take their farming more seriously than others. After the market we walked along the canal to check on Mei Ling's friends' watermelon crop. Almost all the watermelons were over-ripe so the watermelon harvesting trip turned into a watermelon-smashing trip. 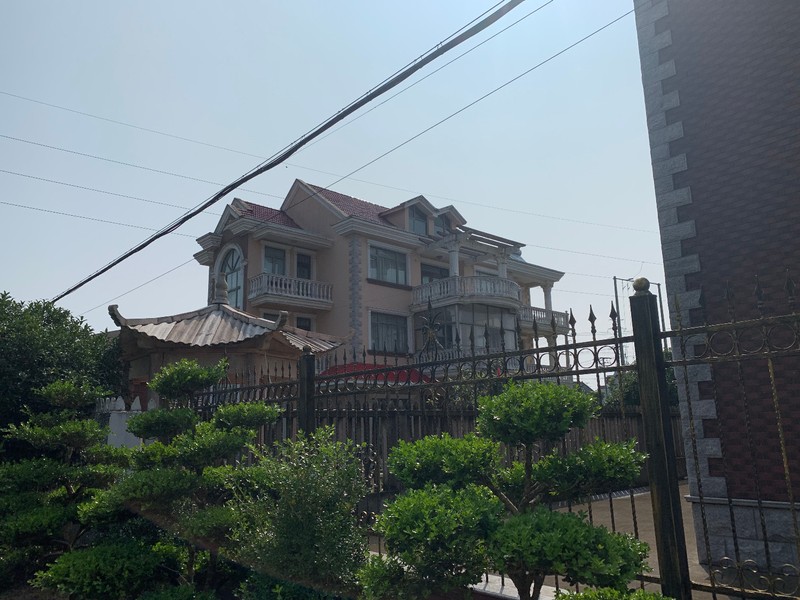 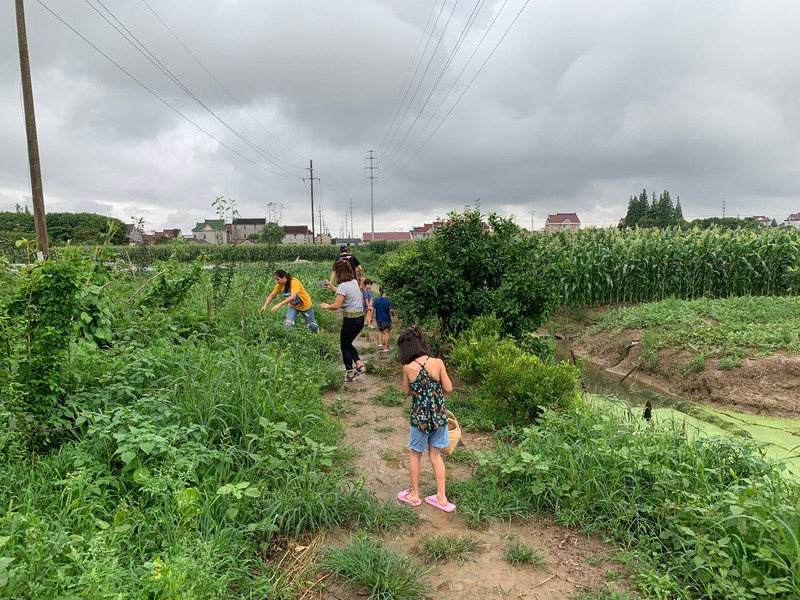 On the way back we checked some of the traps that people leave in the canals to catch small aquatic creatures. We didn't find much in there except tiny crabs and minnows, but it was interesting to see how the locals use every tool they can to increase the variety of their food supply. 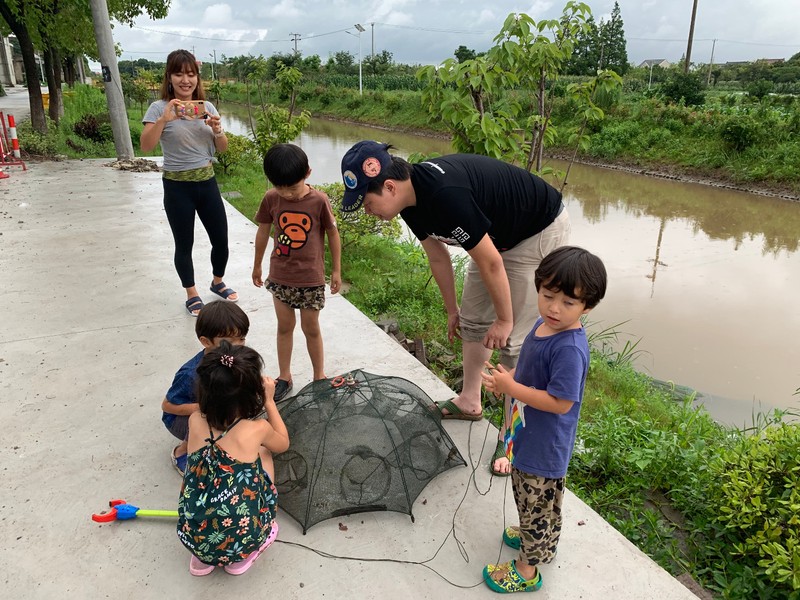 We did finally have drunken shrimp that evening at the banquet Mei Ling's friends threw for us, but the shrimp were so sluggish they would hardly twitch no matter how much Ian poked at them. More fun was to be had from digging tiny snails out of their shells with toothpicks. The bathroom decor was also interesting. The walk home was quite long but the kids got to ride on the scooter as Mei Ling's friend walked it back. 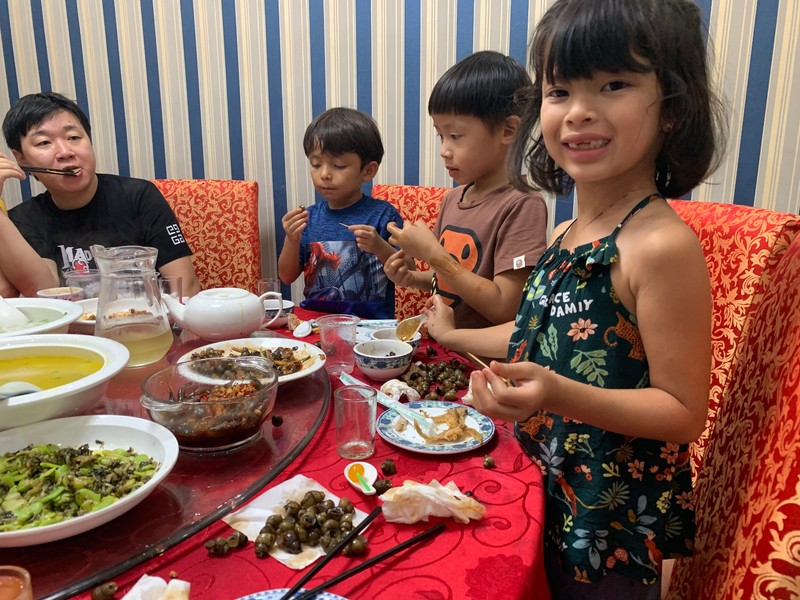 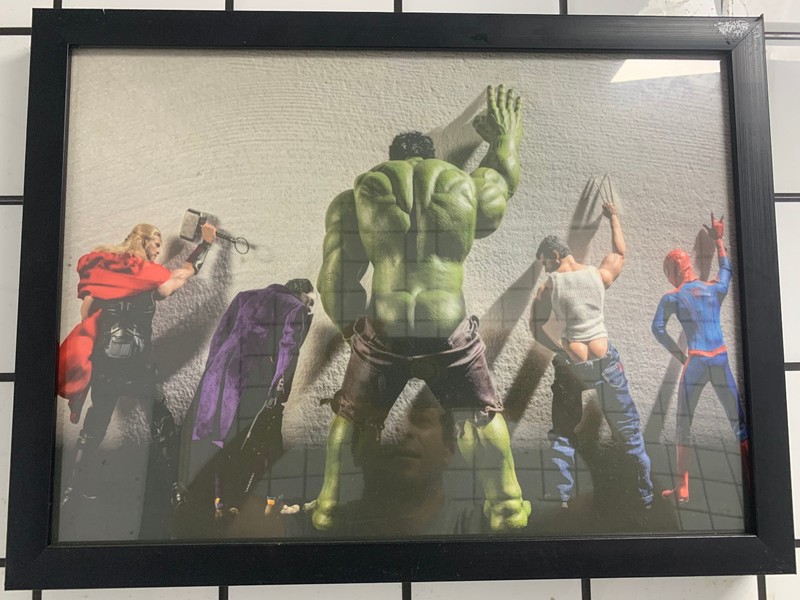 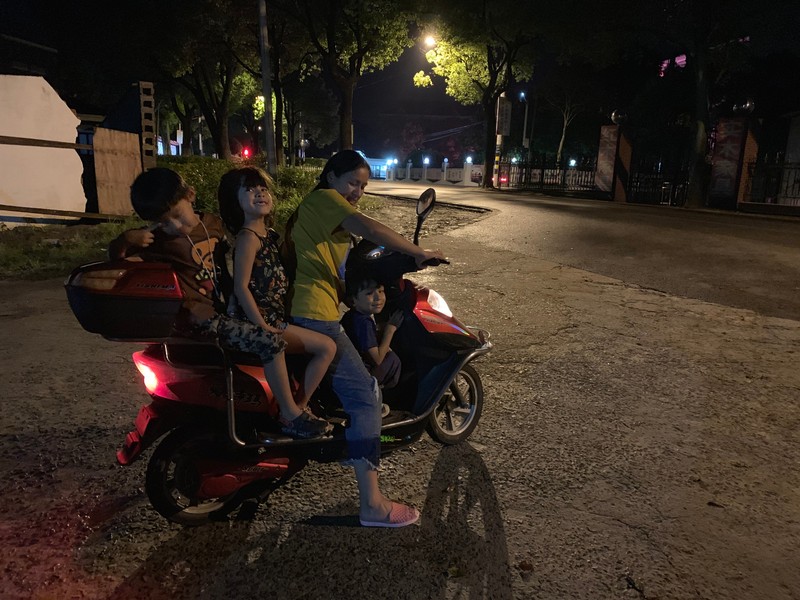 In the morning we went back to the community market to see it operating at full steam. There were more stalls open around the market now, including vendors making delicious breads and pancakes. The seafood section was decidedly more energetic as well. 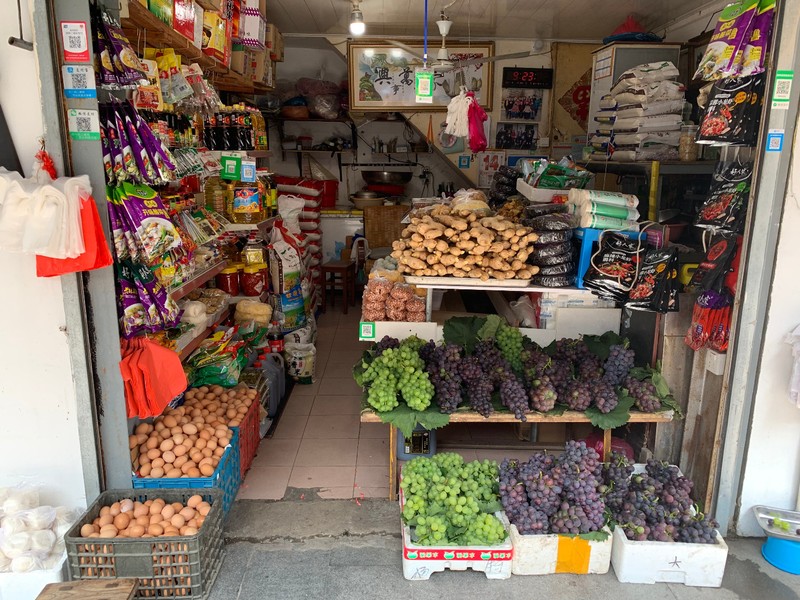 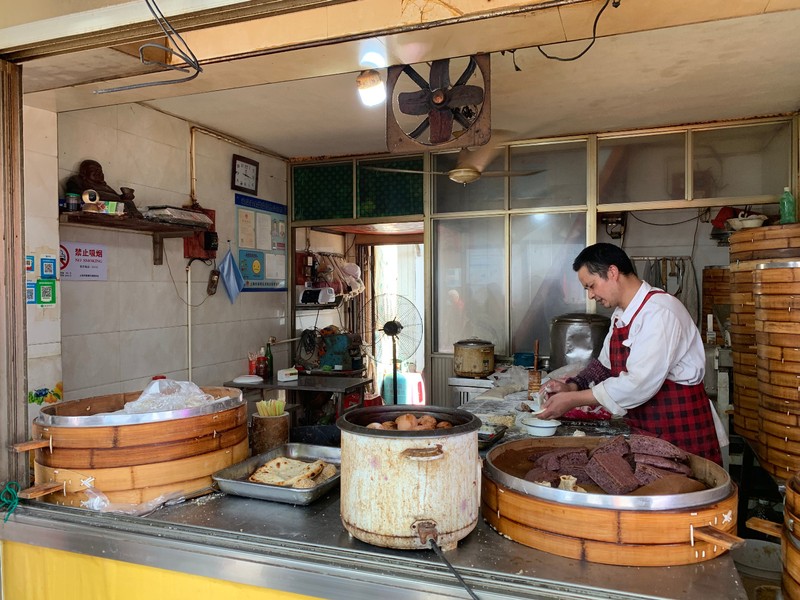 We still had plenty of time before returning to Shanghai so we drove to Chongming Dongtan Birds National Nature Reserve. We hiked across wooden bridges and through some interesting wetlands for a couple of hours until the heat became too much for us. We had a long afternoon and evening of travel ahead of us before we could rest again in Tianjin. 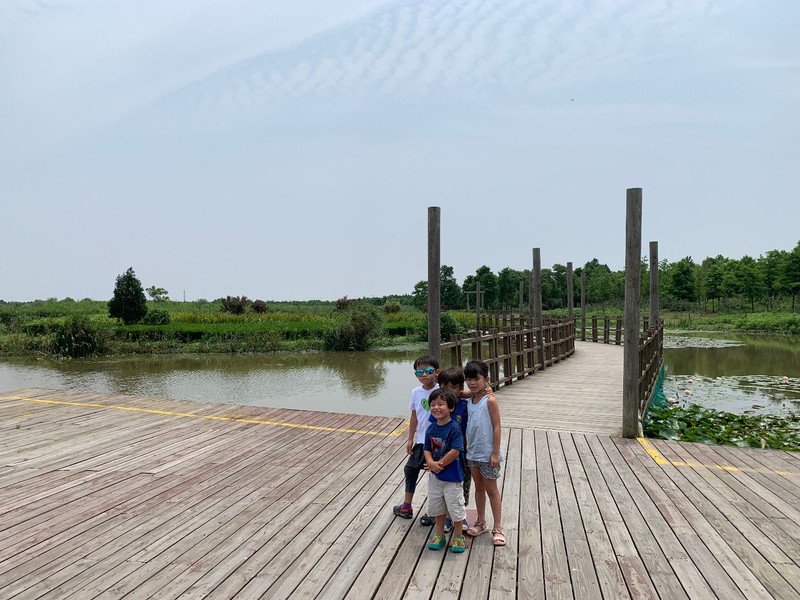 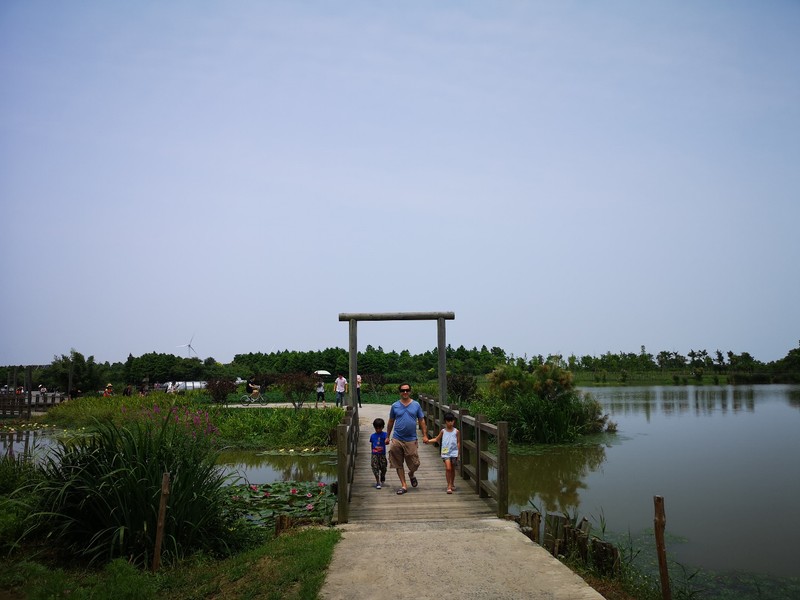 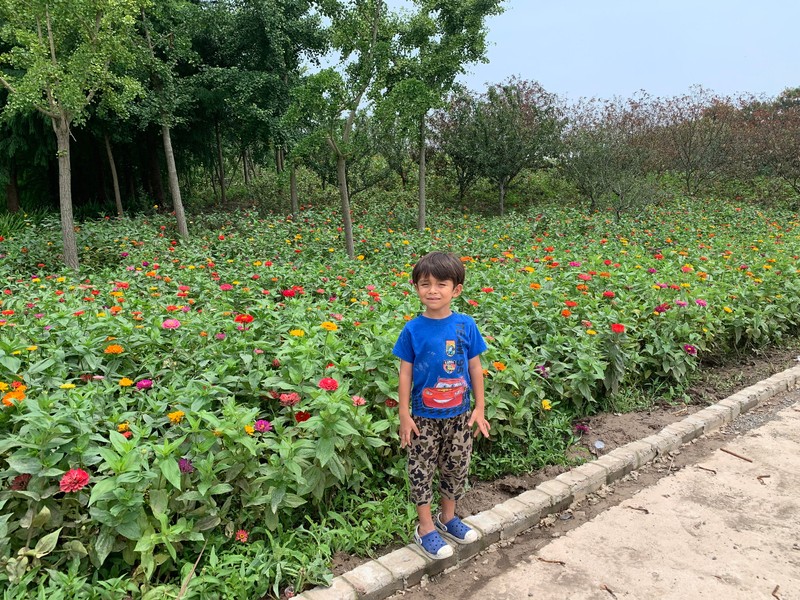 Posted by zzlangerhans 05:19 Archived in China