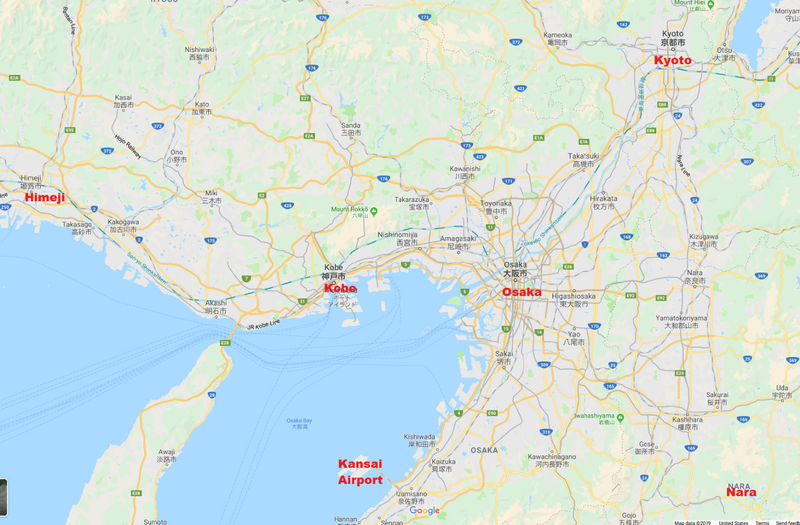 There's a lot more to Kansai than Osaka and Kyoto, but since we only had ten days in Japan we limited ourselves to two of the most popular day trips. I could still remember visiting Nara with my parents as a fifteen year old. Although the iconic temples of the ancient capital are its primary draw, my most vivid memories were of the crowds of tame deer overwhelming my attempts to parcel out crackers fairly. 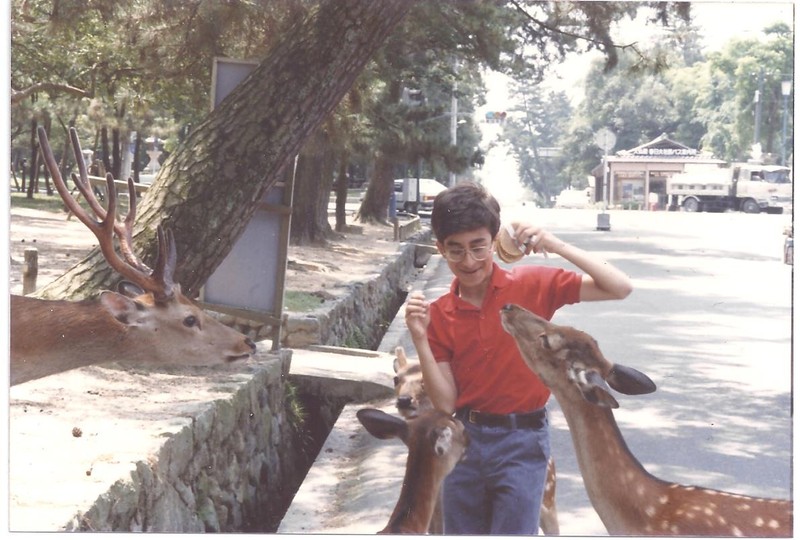 We had an easy train ride from Namba and now I was in Nara again thirty-five years later, this time with my own children. While Nara is a good-sized suburb of Osaka, most tourists confine themselves to the small complex of temples and gardens at the northwestern edge of the town. We wandered around the peripheries of the more famous temples such as Kofoku-ji and Todai-ji but didn't go in, even to see the giant Buddha in Todai-ji. Neither Mei Ling nor I get too excited about religious iconography and the kids are too young to care. On the other hand the kids were enormously entertained by the hungry deer that roamed throughout the complex. 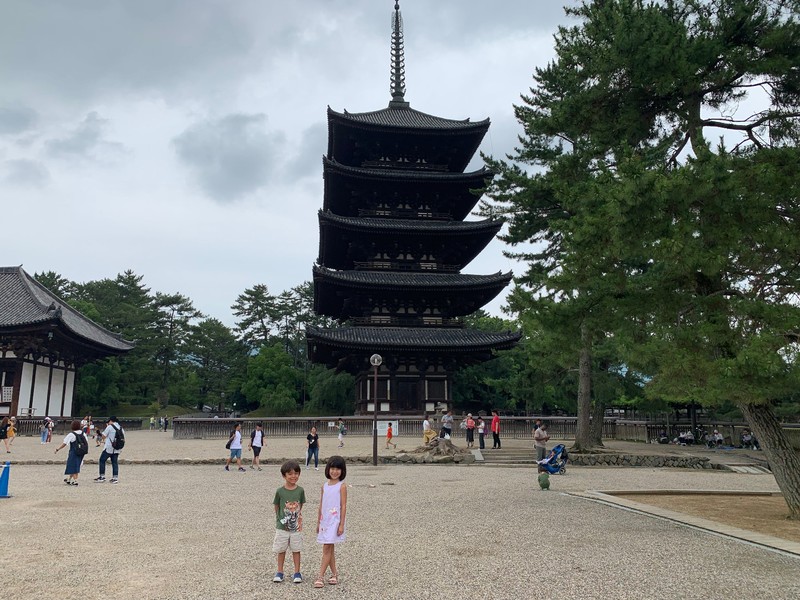 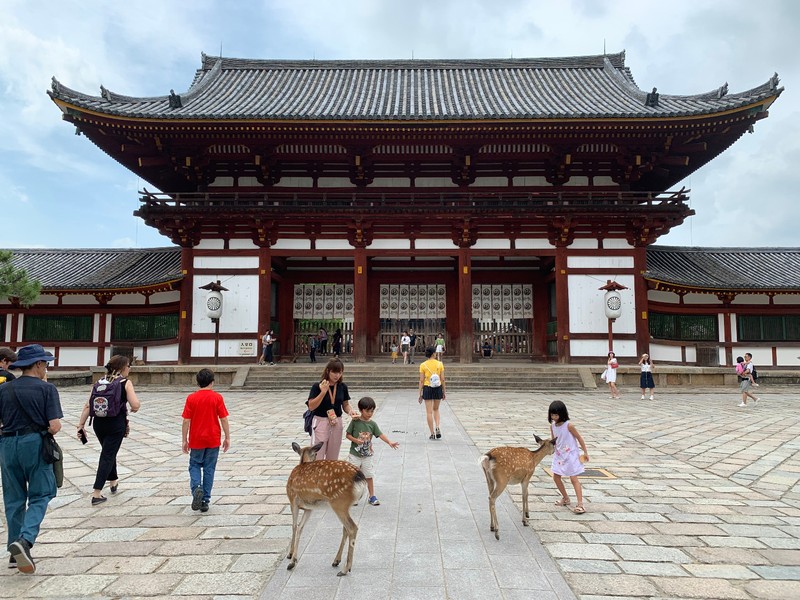 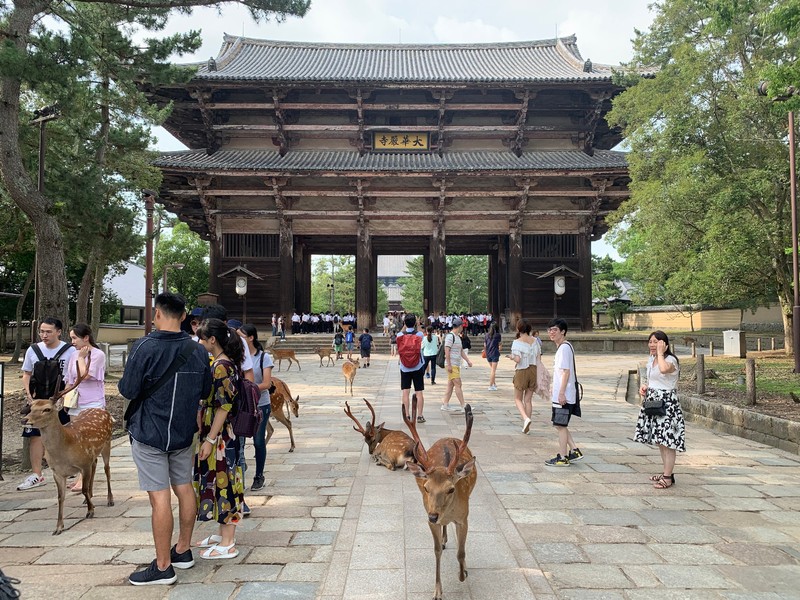 The largest concentration of deer were in Noborioji Park next to Kofoku-ji. A vendor was selling packages of crackers which contained an instruction pamphlet. The paper warned us not to tease the deer with the crackers and to show them our empty hands when we had nothing left. It seemed a little silly until we actually got out there with the crackers and had to contend with being swarmed by deer aggressively darting at our hands. At the same time that we were trying to keep the packages from being snatched out of our hands, other deer were circling behind us and investigating our pockets and bags. At one point I had to jump away from a deer that was slowly working my Japanese phrasebook out of my back pocket. Out of the corner of my eye I saw a sudden flash of movement near Spenser but by the time I could focus on him he was brushing himself off unperturbed. Only later when I watched the video did I see that he barely dodged a large doe lunging at him with its front hooves. He hadn't even done anything to provoke her. I guess I should have been watching my kids a little more carefully instead of filming, but at least we have a video Spenser can be proud to show his own kids one day. 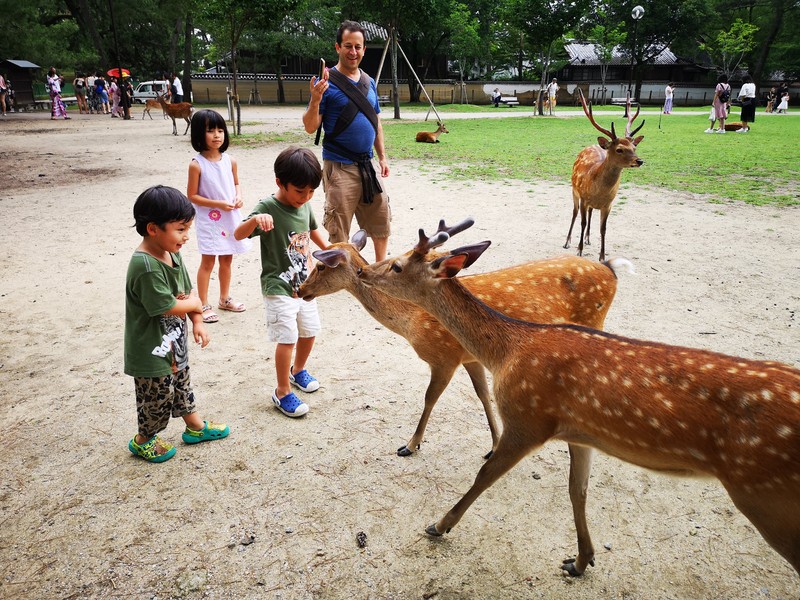 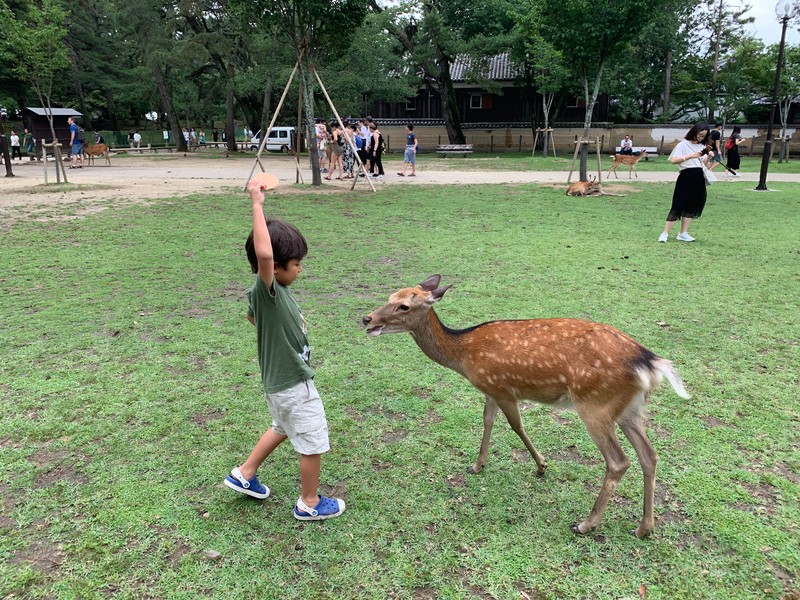 There are two neighboring walled gardens adjacent to Todai-ji. We chose Yoshiki-en Garden for the simple reason that it was free for foreigners while Isui-en was fairly expensive to enter. We enjoyed a relaxing walk along the pebble paths of the beautifully landscaped garden before our return to Osaka. 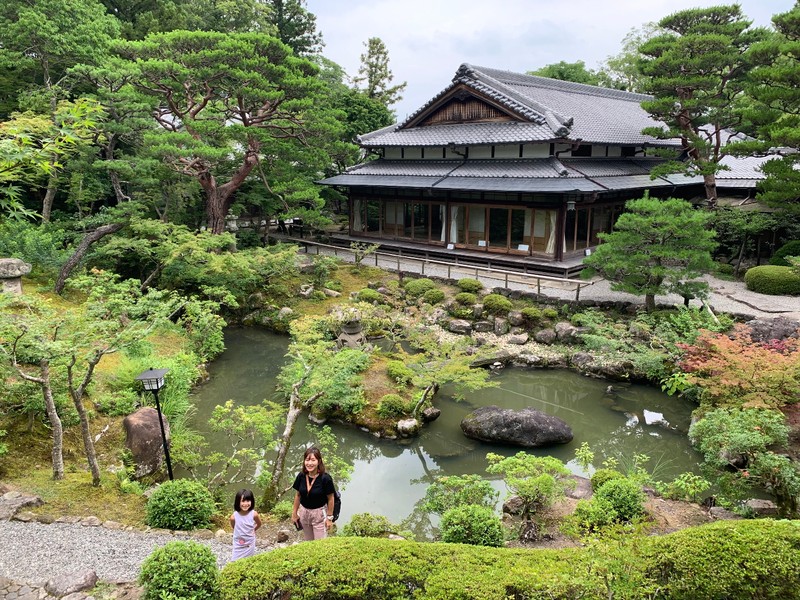 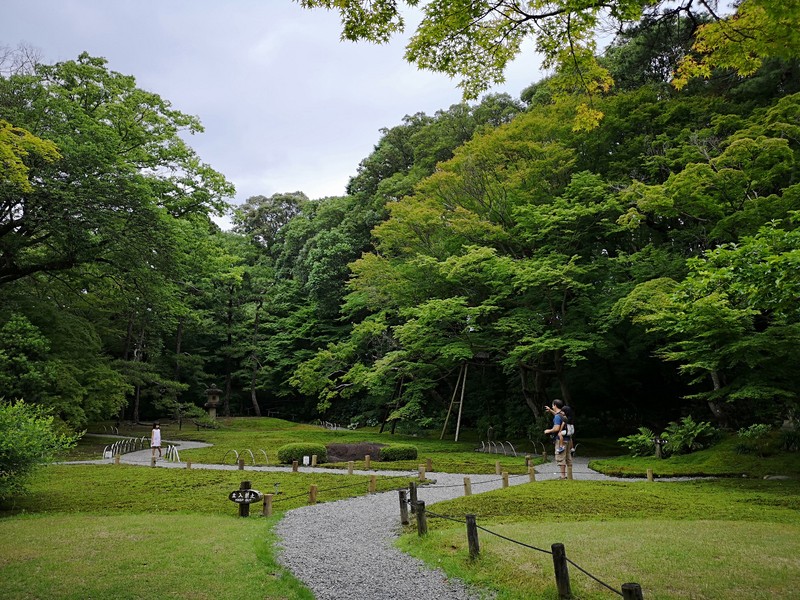 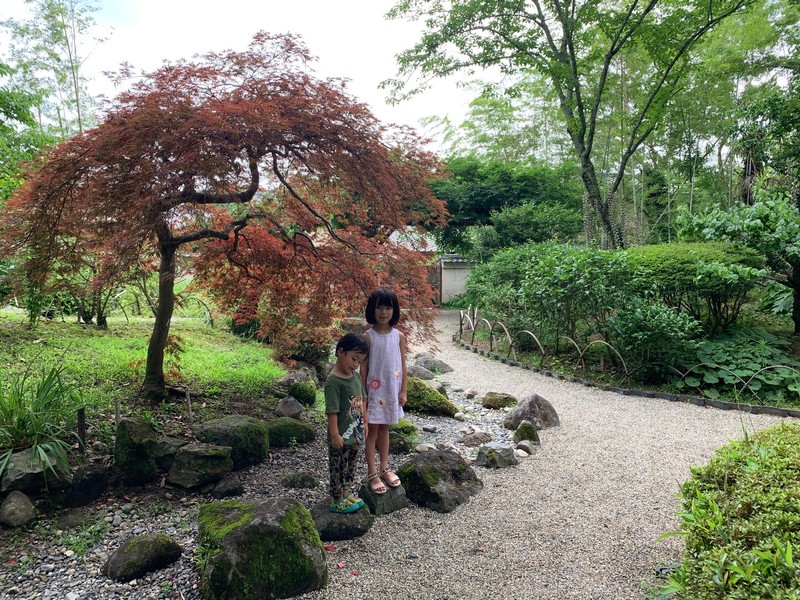 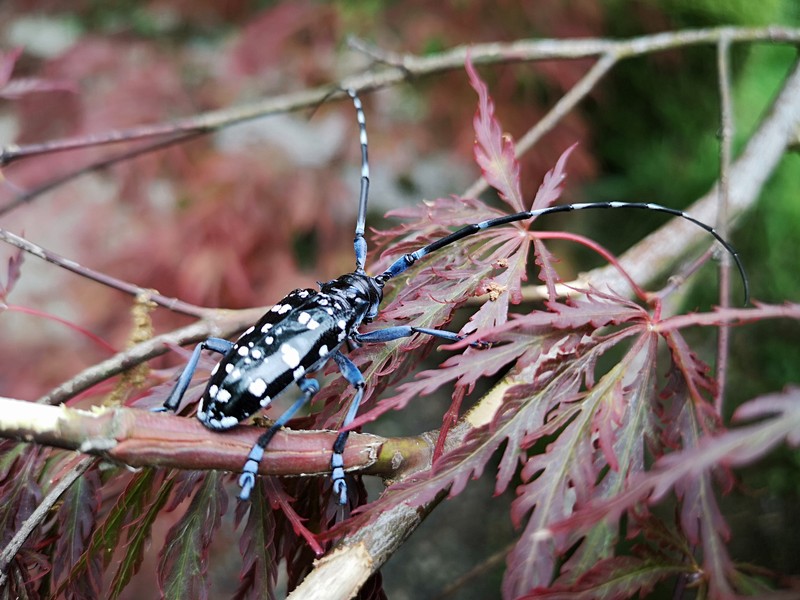 Over the ten days we spent in Kansai we probably visited about as many temples and castles as the average tourist visits in two days. However, we didn't hold back when it came to visiting Japan's largest and most beautiful castle on the last full day of our visit. After a hearty breakfast in one of the food halls in Umeda Station we took the direct limited express train to Himeji. This meant we would be leaving Japan without taking a single bullet train which is something of a tourism sacrilege. On the other hand, we saved about forty bucks for an extra forty-five minutes of travel time. Maybe the shinkansen would have been worth it if we had been riding on the roof of the train, but from the inside of the carriage I don't see how the extra speed would have felt much different.

Himeji is a sizable city of half a million people that sits at the end of the continuously developed coastal area that begins at Osaka. The castle is about a kilometer from the train station but try as we might we couldn't find the stop for the bus that shuttles tourists from the station to the castle. Instead we walked up the wide thoroughfare Otemae Street with the hilltop castle directly in our sights. When I first researched Osaka and came across Himeji Castle I was taken back by how enormous and beautiful it was. Seeing it in person, what struck me the most was the visual impact of the gray-tiled eaves and gables against the pristine whiteness of the castle walls. 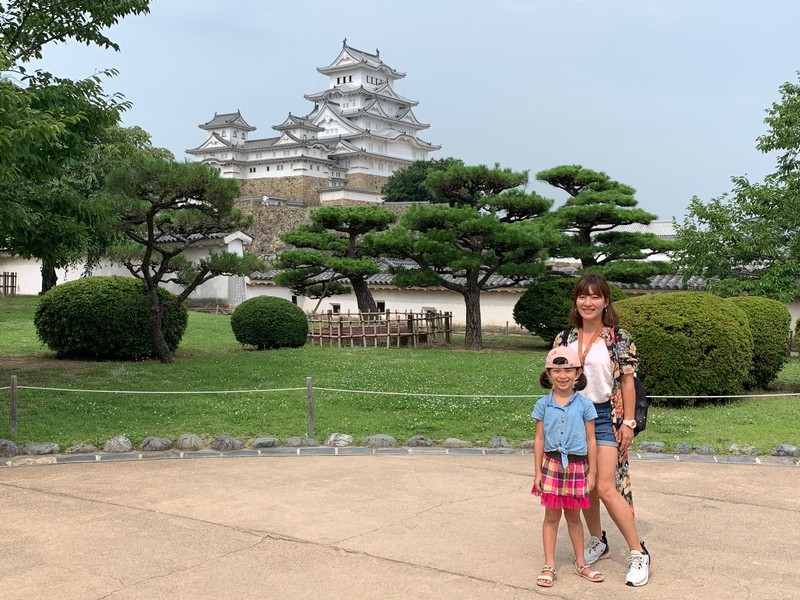 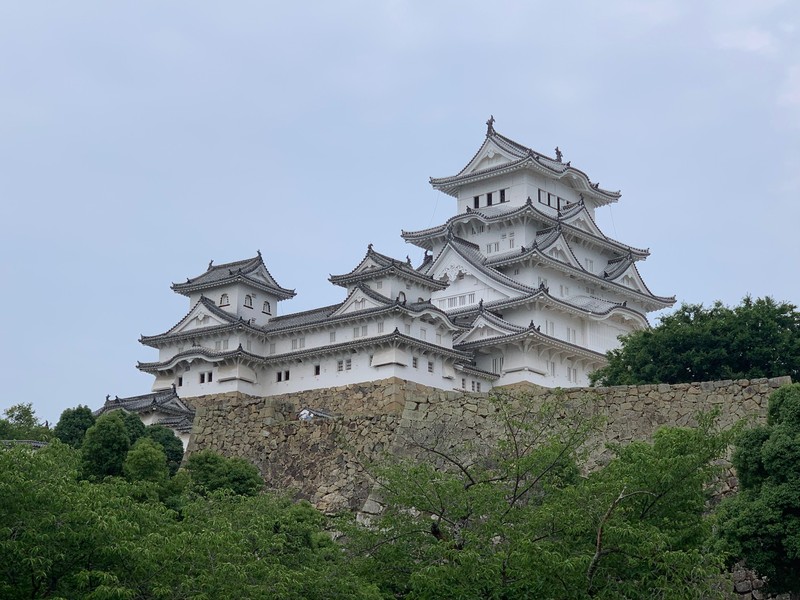 The interior tour of Himeji was quite exhausting. There were six floors and after the second the staircases were more like ladders. Between trying to position myself behind the kids while they climbed and keeping track of them on each crowded floor I don't recall very much about what was inside, aside from the facts that the floors and walls were a dark wood. I don't even recall if photographs were prohibited or not worth taking, but I don't have any. It was a relief to get back outside and walk the rest of the compound underneath the overcast sky. 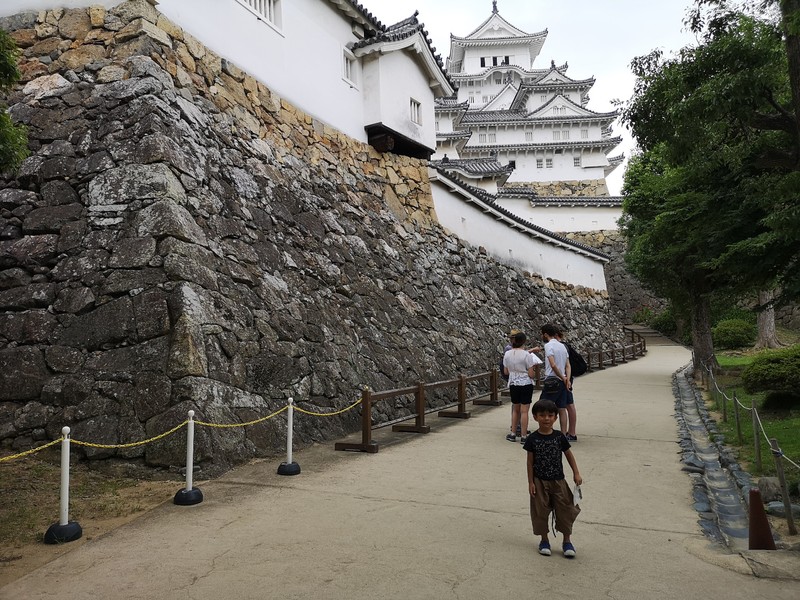 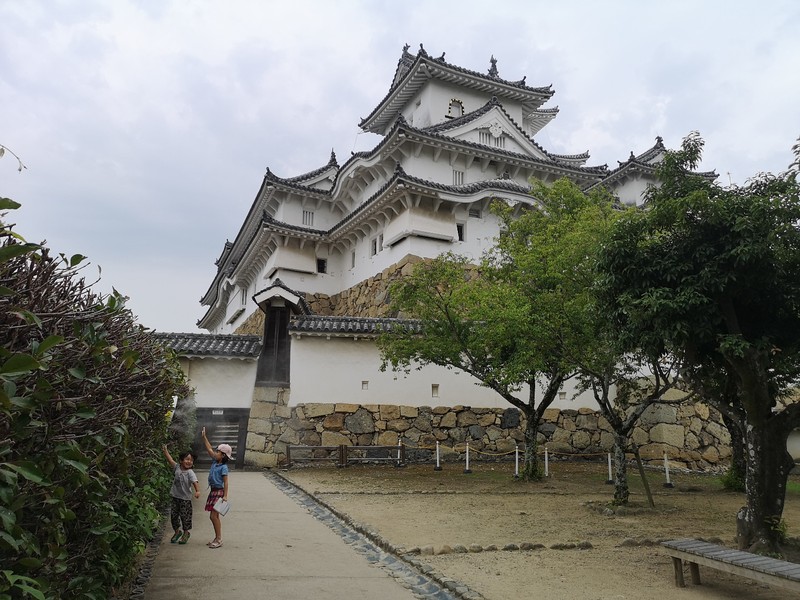 Adjacent to the castle compound is a large complex of gardens called Koko-en. These were the best gardens we saw on this trip to Japan. There was a seemingly endless chain of gardens, each one greener and more pleasingly manicured than the last. The koi in the numerous ponds were colorful and enormous. It was a very relaxing way to conclude the day trip. 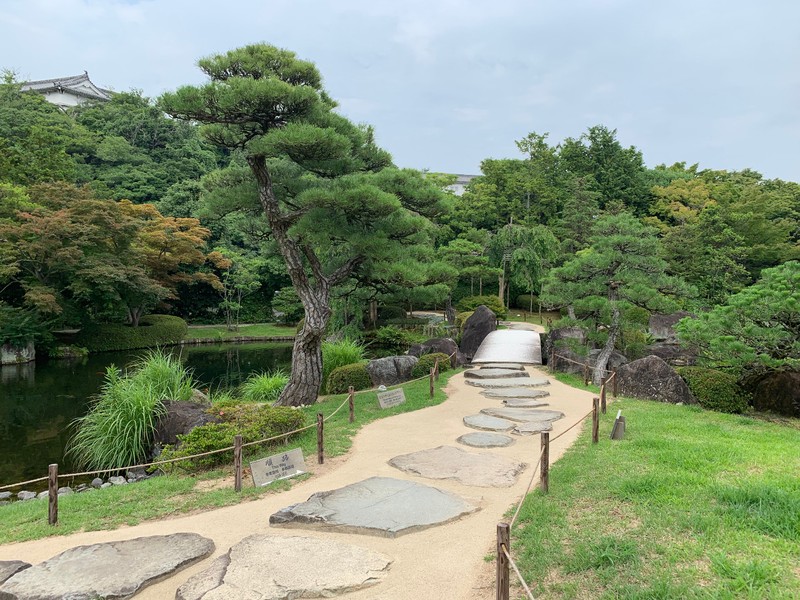 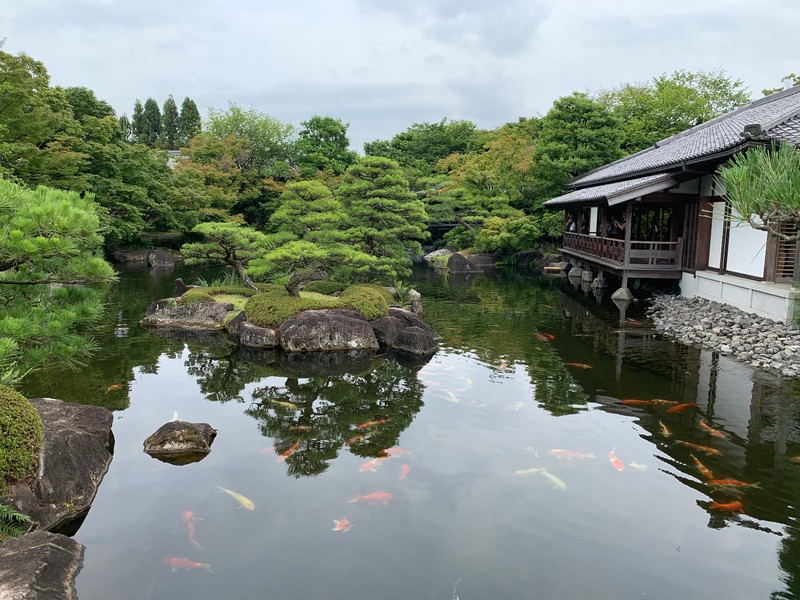 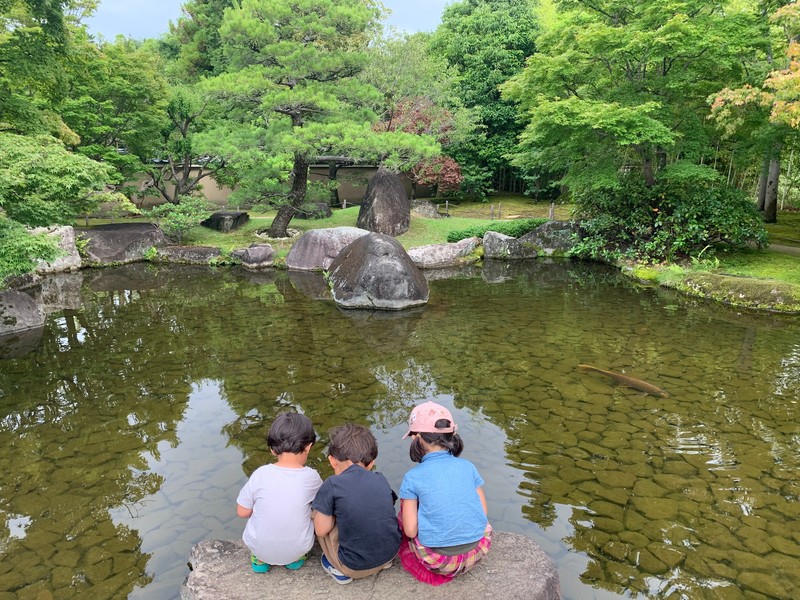 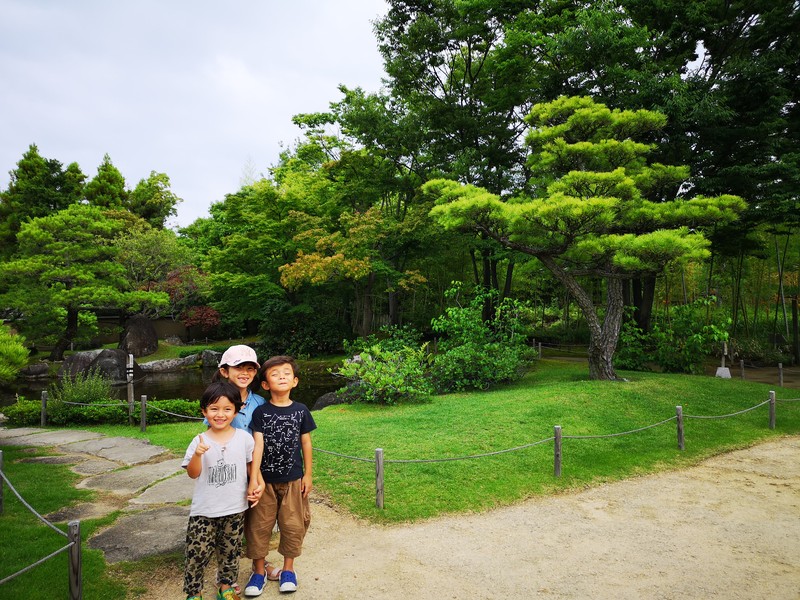 On the walk back to the Himeji train station we realized we hadn't eaten any soba since our first night in Kyoto. Not wanting to miss our last opportunity to eat these delicious buckwheat noodles in the country of their origin we found yet another underground food court close to the station. There was an unusual system in the restaurant where we had to buy tickets for our dishes at a vending machine and give them to the cook, where they were thankfully prepared in the kitchen and not in the bowels of the machine. 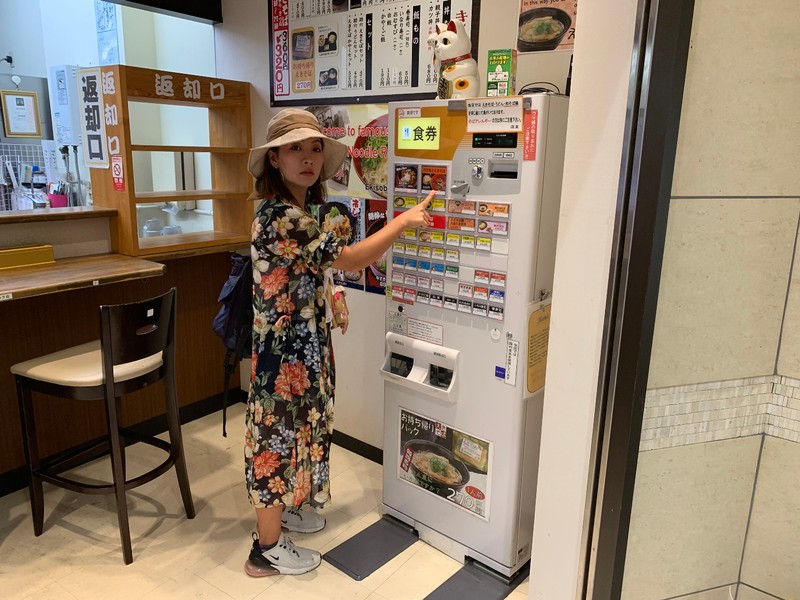 We arrived back at Umeda in the evening and stepped outside for one last look at the plaza with the fountains in front of Osaka Station. We often have mixed feelings about leaving a city that we've enjoyed, but we were sorry to be leaving Osaka. While we had packed everything on our list into our eight day stay, I was acutely conscious that we had still only seen a small fraction of the city's area. Who knows what secrets of Osaka we still hadn't uncovered? It would have been great to have had another week to find out. I had never expected to visit a city on this trip that would crack our top ten, let alone our top three, but we both agreed that Osaka and Kyoto taken together had more to offer a traveler than Tokyo. That left only New York City and London as greater cities to visit thanks to their incomparable international character. Now it was time to fly back to China and revisit our fourth favorite city in the world, the electrifying metropolis of Shanghai. 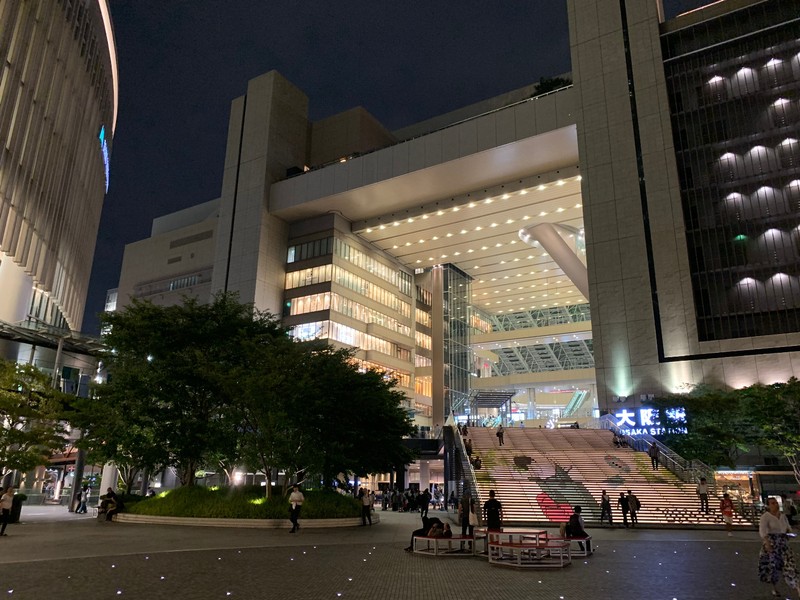