Osaka is one of that rare breed of cities with areas worth visiting scattered all around the metropolitan area. With the exception of London, most major European cities have their interesting sights concentrated in the center. Some of the places I'd compare Osaka to would be New York City, Los Angeles, and Tokyo. As we reached the end of our eight day stay we began to explore some of the less well-known but no less fascinating parts of this enormous, intricate metropolis.

You won't see Shinsekai on many of the recommended short Osaka itineraries you'll find on the web. This compact commercial area just east of Tennoji Park was created by the local government in the early 20th century to mimic entertainment districts in the west, and the vibe is preternaturally similar to Coney Island in New York City. The streets are packed with cheap restaurants selling Japanese fast food to locals and tourists alike who may not be amenable to the high prices of izakayas in Minami and Kita. In the center of Shinsekai is Tsutentaku, which was the second tallest building in Asia at the time of its construction in 1912 and is still popular for its indoor exhibits and observation decks. 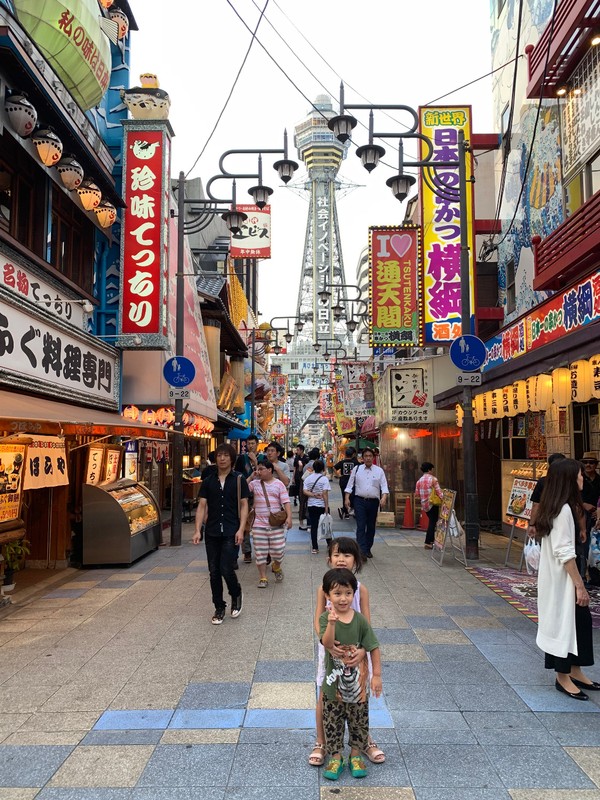 Shinsekai in some ways was similar to Dotonbori but the atmosphere was more working class than touristy. I had the feeling that most of the visitors to the area were local blue collar types who were looking for a cheap place to eat, drink, and socialize. The close proximity to Osaka's largest red light district probably contributes to that atmospheree as well. The Buddha-like monkey statue that appears somewhere around almost every establishment in Shinsekai is named Billiken and is the unofficial mascot of the area. Despite the enticing decoration of many of the restaurants, the offerings of deep fried skewers and other low quality snacks didn't tempt us. Fortunately Mei Ling figured out that the restaurant with the full-size fishing boat embedded in the marquee offered indoor fishing for dinner and we were immediately sold. 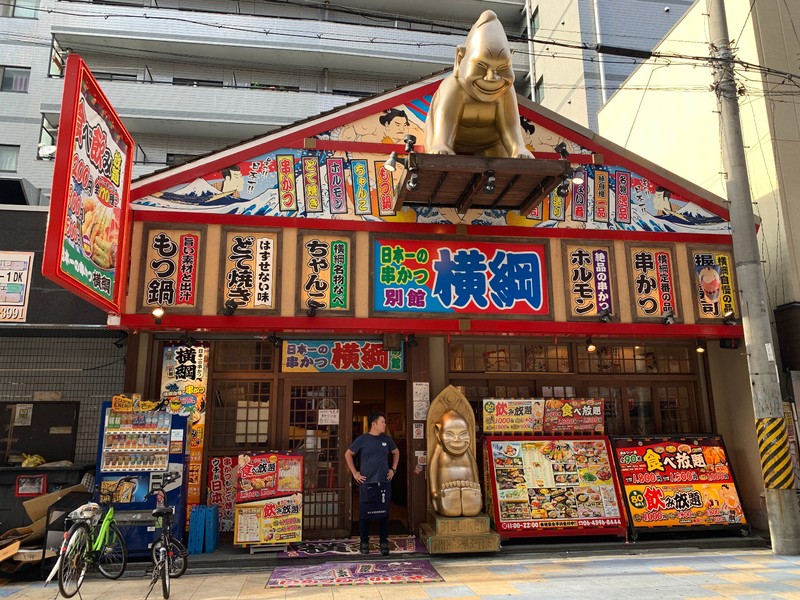 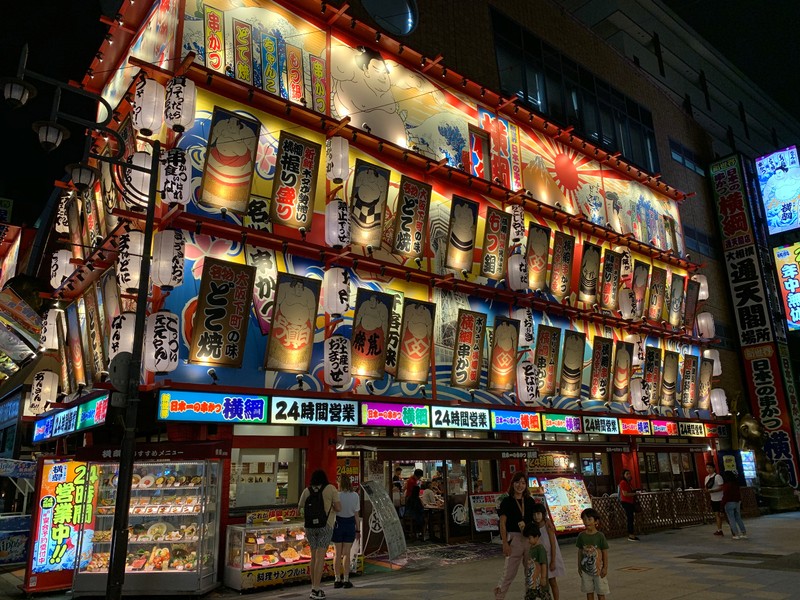 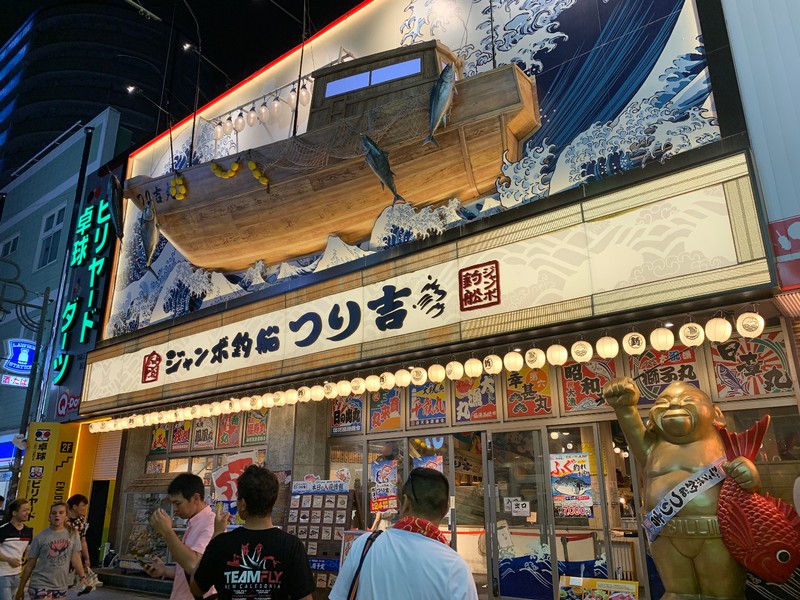 You can't make three young kids much happier than by taking them to a restaurant where you fish for your own dinner. The interior of the restaurant was styled like an ocean with the tables on large boat-shaped platforms seemingly floating on the water. Between and around the boats two kinds of fish swam freely, brown puffer fish and pinkish bream. The waiter provided us with a paper cup of tiny dead shrimp and made it clear that whatever we caught we had to buy, nothing could be thrown back. We baited hooks on the fishing poles that were propped against the railing and quickly learned that neither type of fish was the slightest bit interested in the dead shrimp. We could see the fish swimming right past the bait without even shifting their course. The next thing we tried was the net which I could actually reach into the water with. After a couple of misses I caught one of the puffer fish. I'm pretty sure it wasn't the kind that will kill you if it isn't prepared correctly, but it still cost us eighty bucks. I hadn't read the menu carefully before we began fishing. Afterwards we watched how the locals were doing it. They all went to the most crowded tank and waited for a huge swarm of the pink fish to swim underneath, at which point they would whip the bare hook up and snag one of the fish through the skin. We tried the same technique and soon enough caught one of the pink ones. We tried several different preparations of our fish including on-the-bone sashimi and flash-frying. Ironically the twenty dollar bream tasted better than the puffer fish which was four times as expensive. 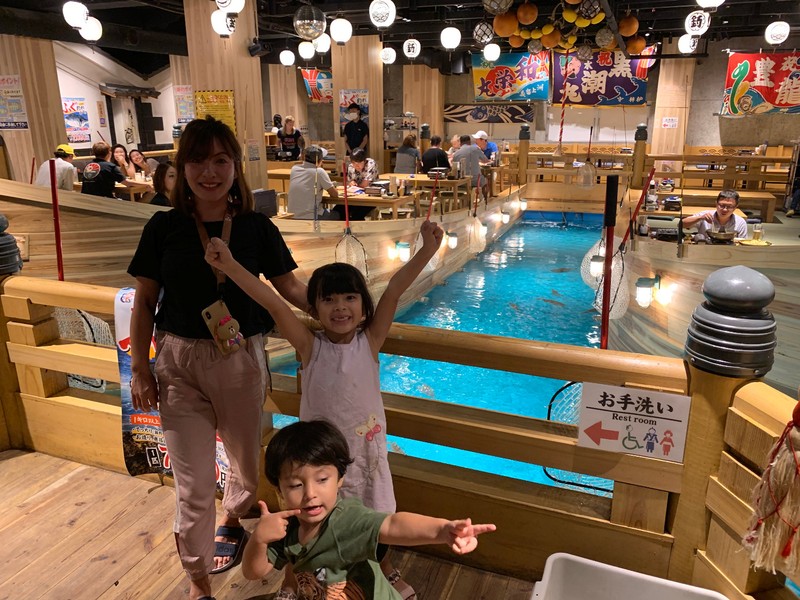 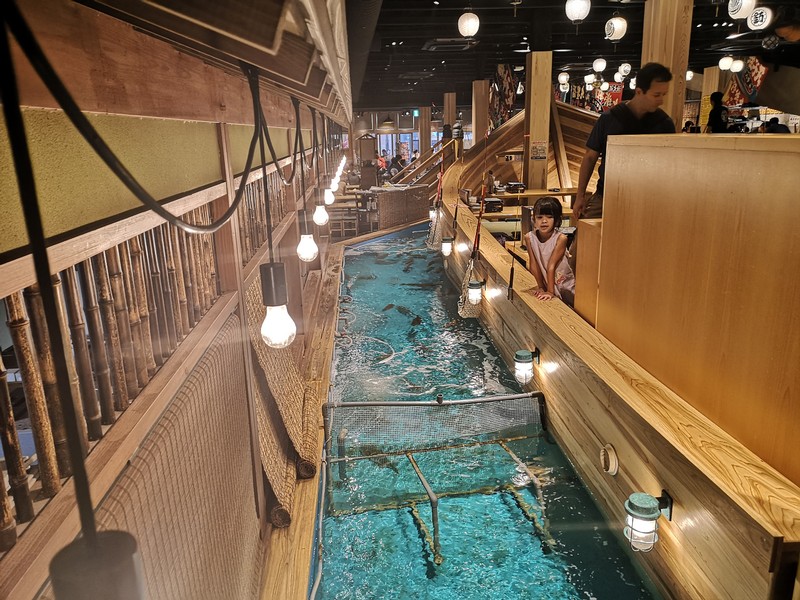 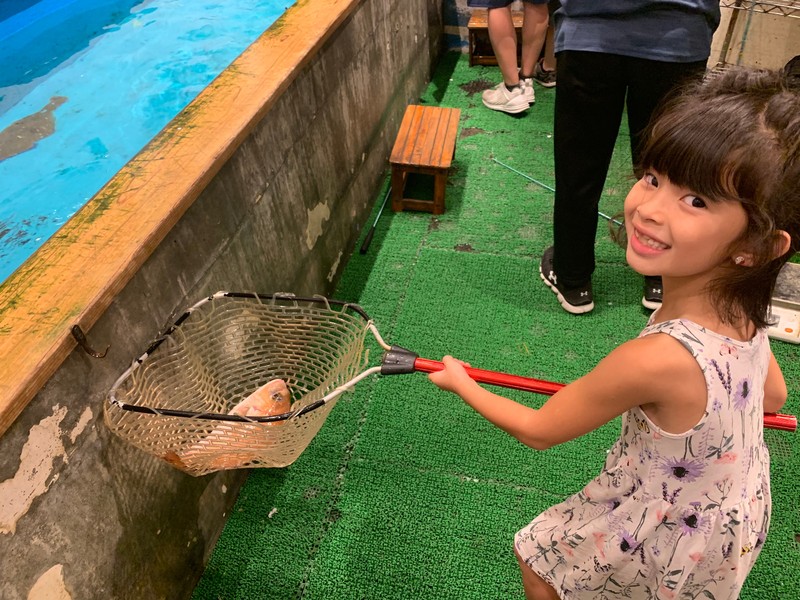 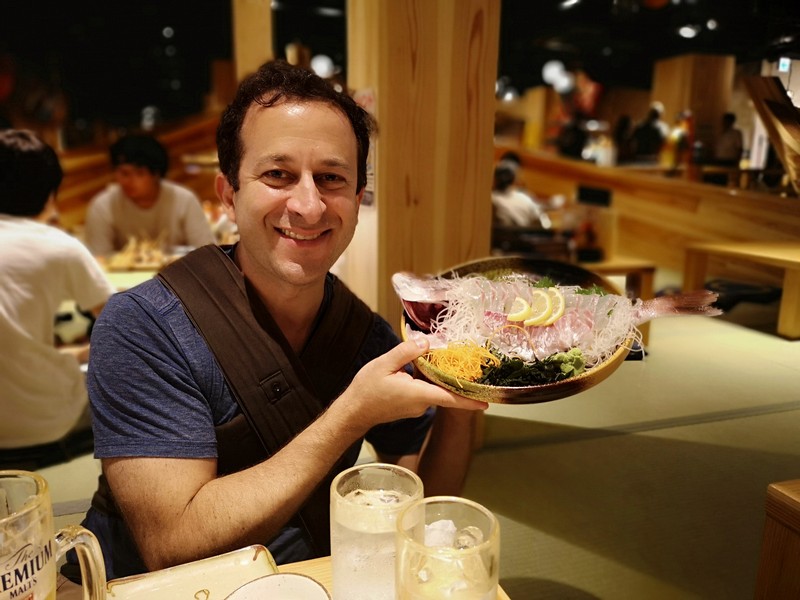 The kids loved the fishing restaurant so much they made us go back for a second round two days later. This time it was Saturday evening so we had the added bonus of the weekly night market, held in a covered arcade parallel to the main pedestrian street. The first stall we encountered had a wide array of exotic snacks from lizards to scorpions. We'd tried similar things before in China but it was surprising to see in a conservative country like Japan. A lot of their food seems exotic to Westerners but typically insects and lizards are not on the menu. Cleo was actually the one who got us started on eating the bugs, clamoring insistently for a cup of the sauteed mealworms which she devoured with gusto. By the time we'd finished we'd gone through the mealworms as well as a huge scorpion and a meaty gecko. Unfortunately I can't say I enjoyed the creepy-crawlies as much as I did in China. The vendor used a frying pan rather than a deep fryer so the large scorpion and gecko didn't get crispy at all. The scorpion's skin was chewy and when it tore open there was a white pulpy interior that was somewhat bitter. The gecko likewise had an inedible skin and very fishy meat. The kids all had a go at each of them but in the end most of it ended up in the trash. 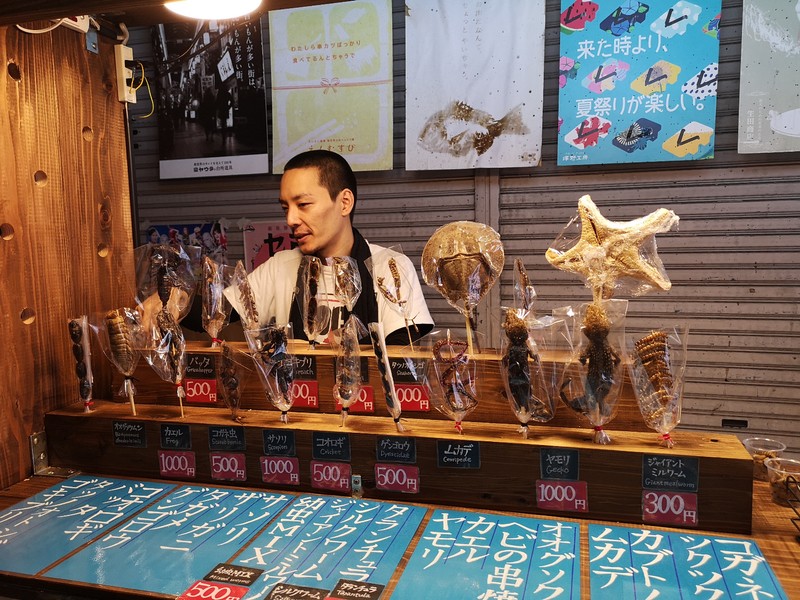 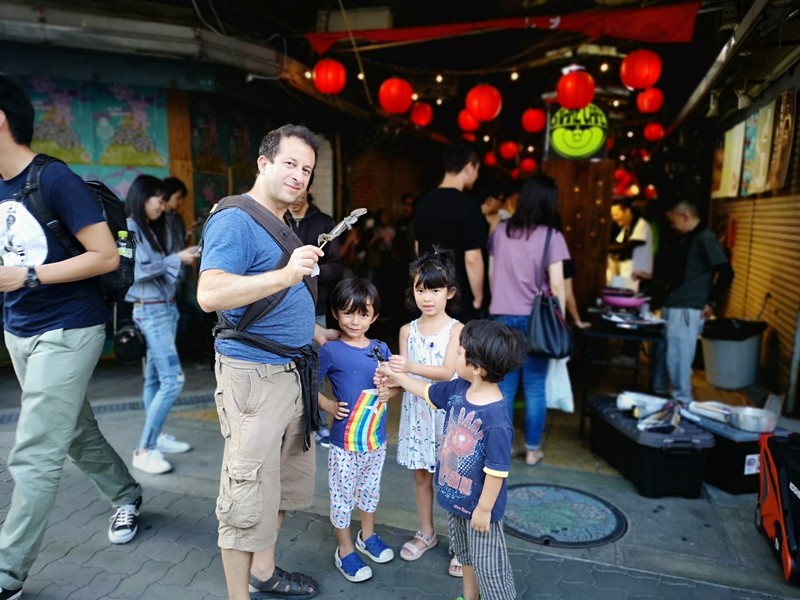 My research into Osaka seafood markets had yielded one last promising opportunity, the Sunday fish market in the southern suburb of Tajiri. The English language internet didn't have much information about this market so it was somewhat of a leap of faith for us to take the hour-long metro trip early on Sunday morning. Fortunately we found the market as promised and although it was small it wasn't disappointing. Not many tourists are up for the long trek to a residential neighborhood far from the center and it was clear that it was mainly a local event. We didn't see any seafood that was unusual or unfamiliar but there were a lot of snack vendors and we put together a decent lunch of typical specialties. There were plenty of fruit and vegetable stands along with the seafood stalls. One of the most popular dishes was eel tempura, although none of us are partial to deep-fried food. 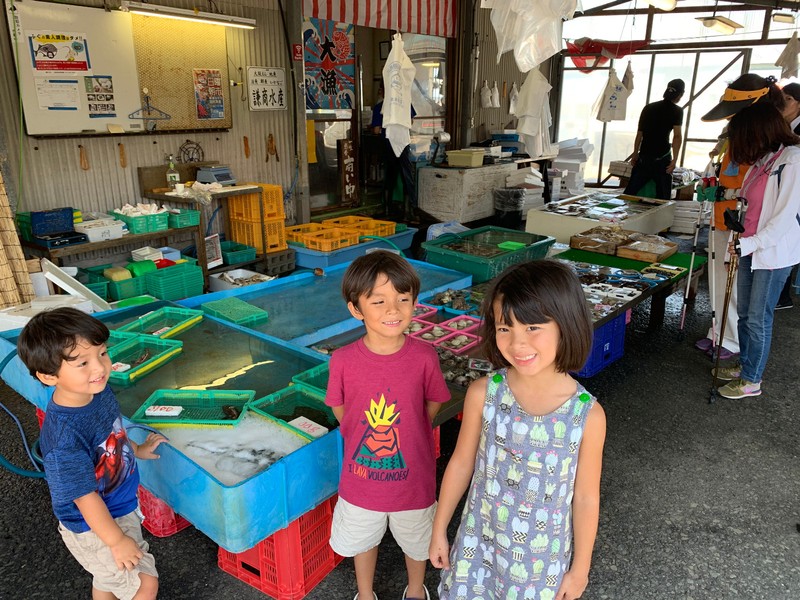 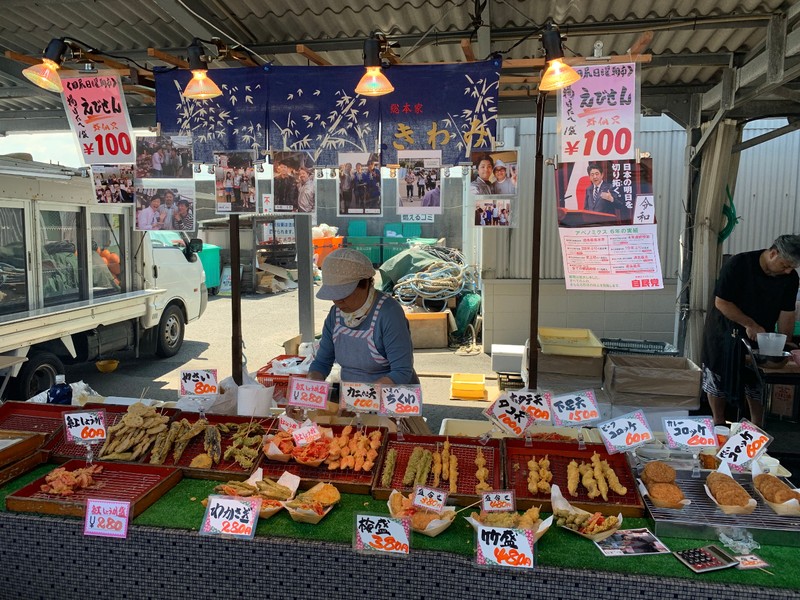 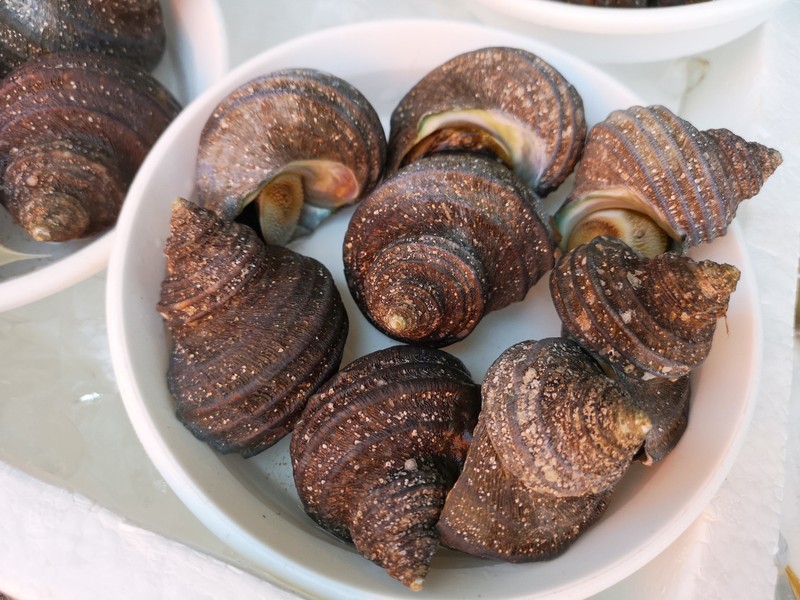 There's an opportunity at Tajiri to board one of the fishing boats and help them haul in the nets, after which you can prepare your catch in an area of outdoor grills. We were somewhat late for that and it seemed to be a complicated and expensive venture, so we chose the alternative activity of fishing for bream in makeshift pools underneath the suspension bridge that crossed over the port. I was surprised at the number of adults that were fishing in these stocked tanks but I suppose it's the best way to be sure you're getting the freshest fish. It was kind of tricky to keep balanced on the floating platforms and I was terrified that one of the kids would fall into the water so we made them sit down most of the time even when they were fishing. We had to pay the full price for each kid to catch a fish even though we were throwing them back. We'd already eaten enough bream for a year over two dinners in Shinsekai. 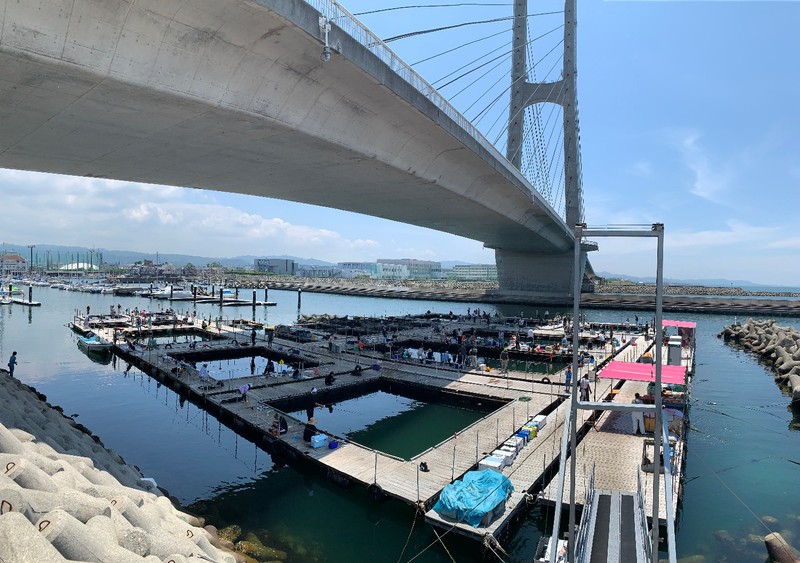 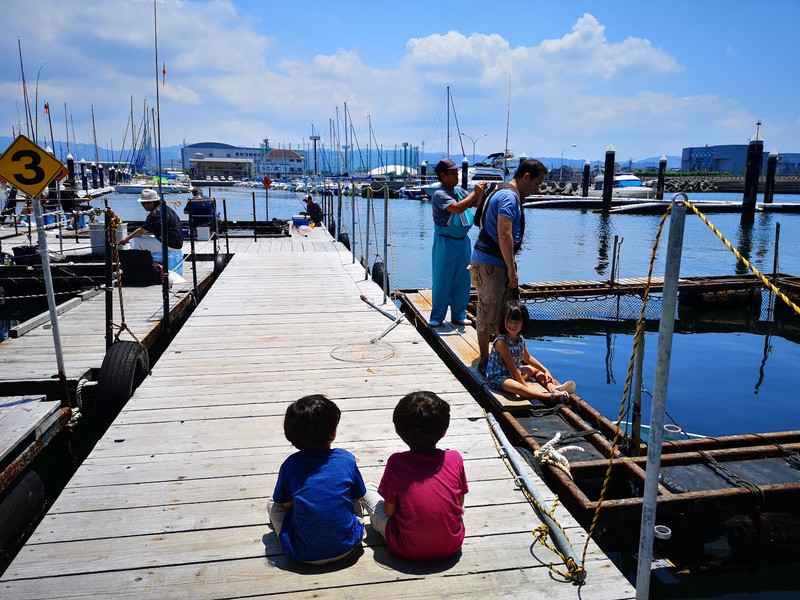 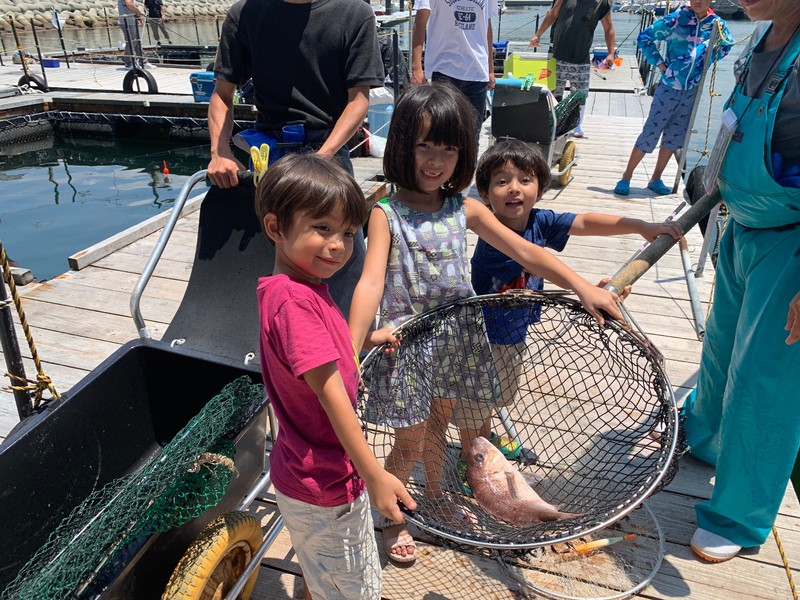 We took a long walk through local streets to the next metro station over from the one we had arrived at. It was another nice opportunity to enjoy a quiet suburban atmosphere and admire the uniqueness of Japanese design. I especially enjoyed the old-fashioned ceramic tile roofs that make the most modest house look like a Buddhist temple. One house under construction had beautiful wavy blue tiles that were reminiscent of the surface of the ocean. It was another example of how Japan has managed to be simultaneously one of the most innovative and also most traditional societies in the world at the same time. 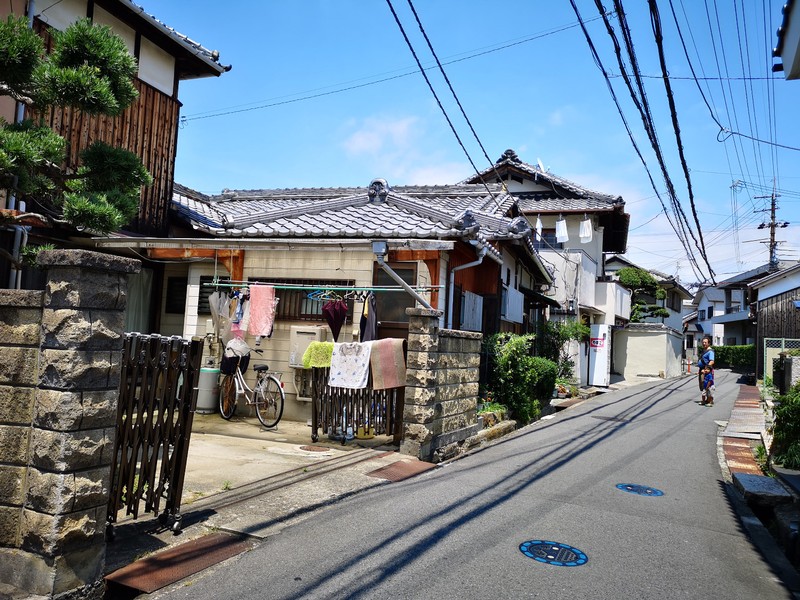 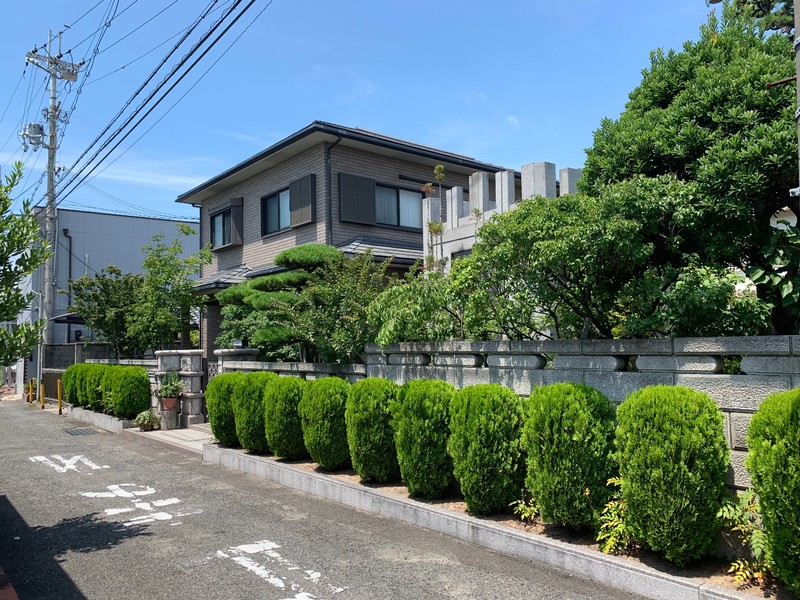 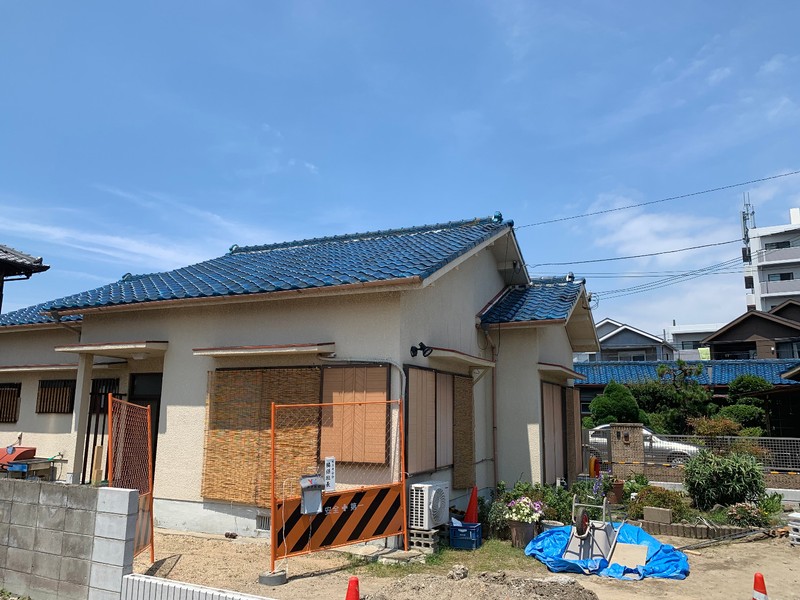