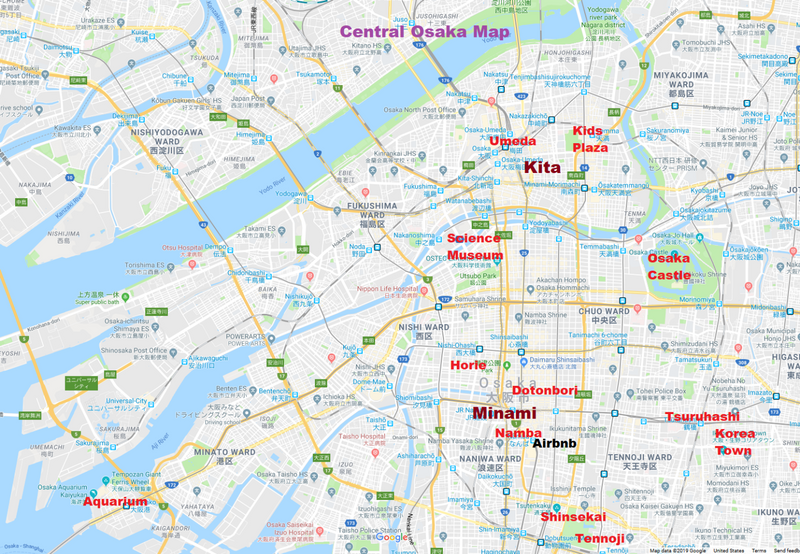 While most travelers to Osaka gravitate to the frenzied commercial nerve centers of Minami and Kita, those neighborhoods only represent a tiny fraction of the city's expanse. We found quite a lot to see and do in the areas just to the south and west of the center as well. On our first full day in Osaka we walked south from our Airbnb through Denden Town, Osaka's electronics and geek culture district. I was always a book nerd and never got into electronics or comics so there wasn't much of interest to me in Denden. The kids were mostly fascinated by the endless rows of vending machines selling cheap toys in plastic spheres. Close to Denden is Rockstar Reptile Cafe, where you can enjoy the company of reptiles and bugs while you drink coffee or nosh on fried worms. Rockstar copes with curious tourists by charging a one thousand yen lifetime membership fee. If you're a tourist passing through on a one-time visit, expect to pay this hefty cover. If you're local and become a regular you only have to pay once. We understood the point and we wanted to work with them, but they insisted that each one of our small kids pay the full cover. That didn't feel very welcoming and we weren't about to pay fifty bucks plus the high prices for coffee so our kids could play with a couple of snakes and bugs. Mei Ling got a video of the place while I tried to negotiate and then we hightailed it.

Before we visit a major city I always search online to see if there are any special events or festivals occurring during our visit. I had timed our visit to Osaka partially to coincide with the Aizen Festival, the first of three major summer Buddhist festivals in Osaka. The problem was I could find next to nothing about the festival schedule on the English language internet. In the end we just decided to walk to the Aizen-do Shomanin Temple on July 2, the last day of the festival. The temple is in Tennoji, a few blocks east of Denden Town. We climbed a long flight of stone steps to the top of the hill where the temple sits. When we reached the top there was no festival and practically no one there besides us. One Westerner walked by and explained to us the proper way to use the purification fountain. He had never heard of the festival. Fortunately I hadn't told the kids anything about it so they wouldn't be disappointed. It was a very beautiful place and since it's not well-known enough to be in any guidebooks we had it all to ourselves. 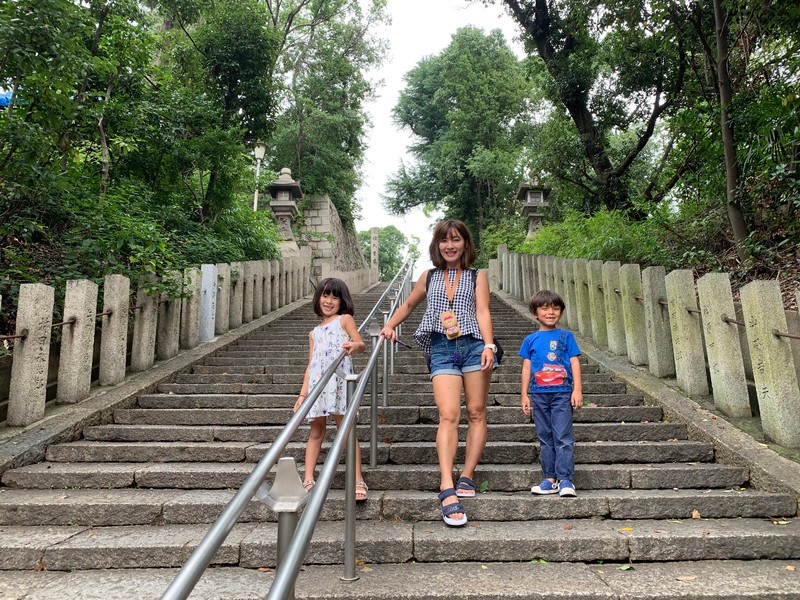 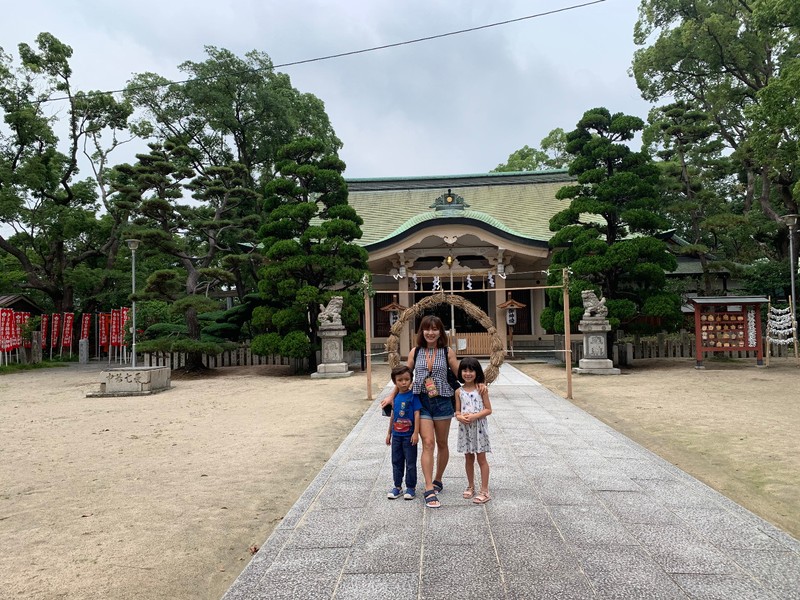 Further south, Tennoji Park is home to the Osaka Zoo and the Osaka City Museum of Art as well as Keitakuen Garden, a traditional Japanese garden that was designed more than a century ago. The central pond is surrounded by immaculately trimmed dwarf trees and has a central island which cannot be accessed. The foliage and the art museum in the background are vividly reflected in the mirror-like surface of the pond, a welcoming tableau for a group of painters on the opposite shoreline. 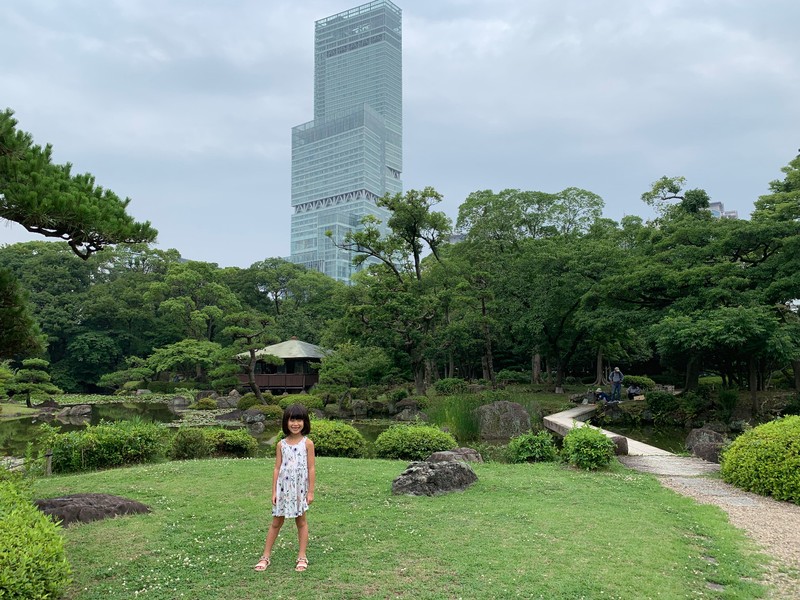 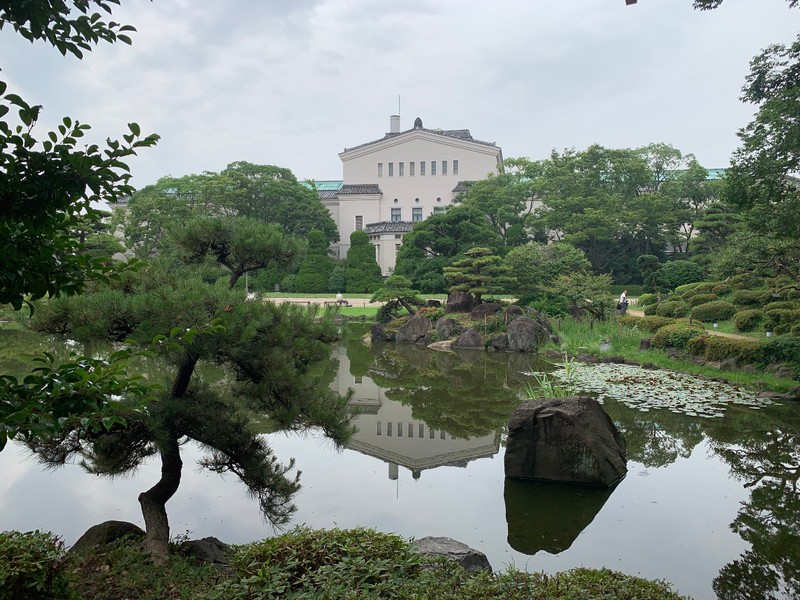 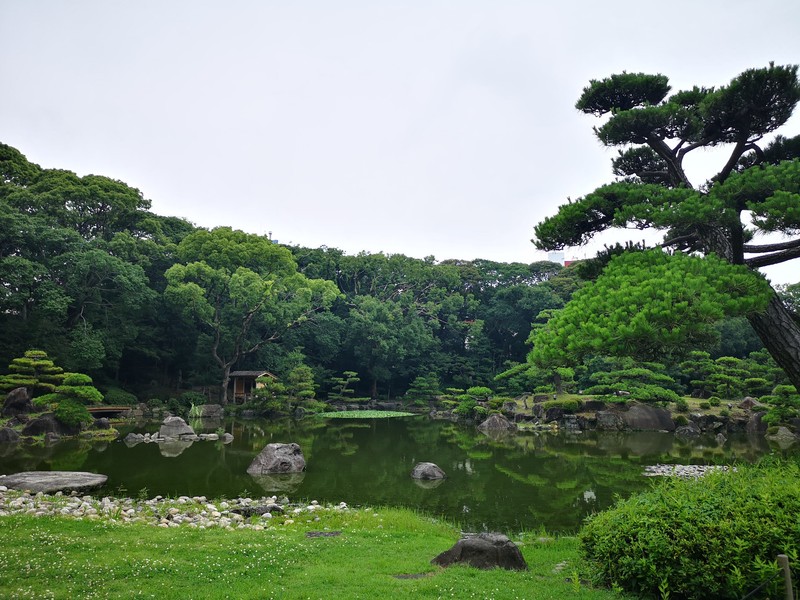 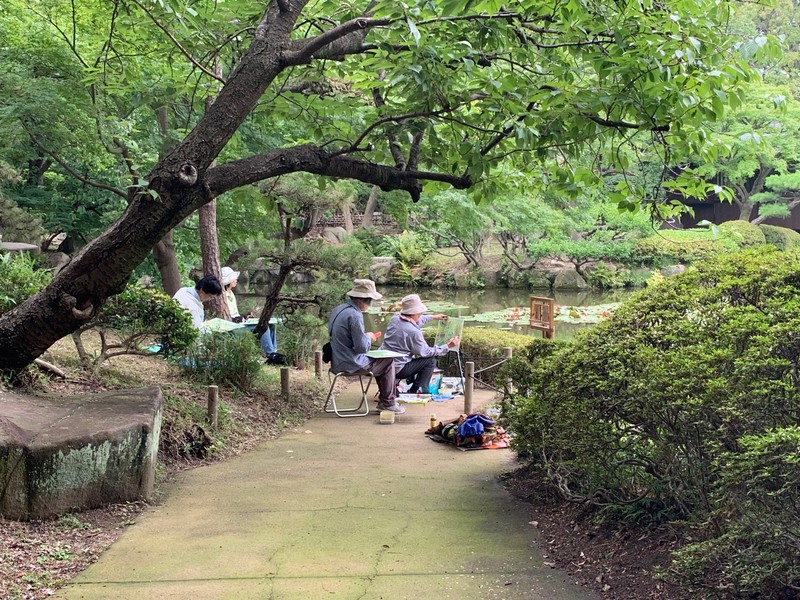 From Keitakuen we took the metro north to Osaka Castle. Osaka lives in the shadow of neighboring Kyoto when it comes to historical sights, but the castle is the city's one claim to traditional glory. Although there has been a fortress on the site for almost five hundred years, it has been destroyed and rebuilt several times. The most recent restoration was completed just twenty years ago. The castle is surrounded by two wide moats whose walls are constructed of granite boulders that have been carefully fitted together. The absence of mortar makes the walls more resistant to earthquakes as they can shift without cracking. The multi-story castle also sits on a stone base and has a very pleasing Japanese house-of-cards appearance with some ornate golden flourishes. On learning that the interior mainly consists of museum exhibits we decided to forgo entrance, instead providing the kids with oversized and startlingly fluorescent shaved ices at the gift shop. 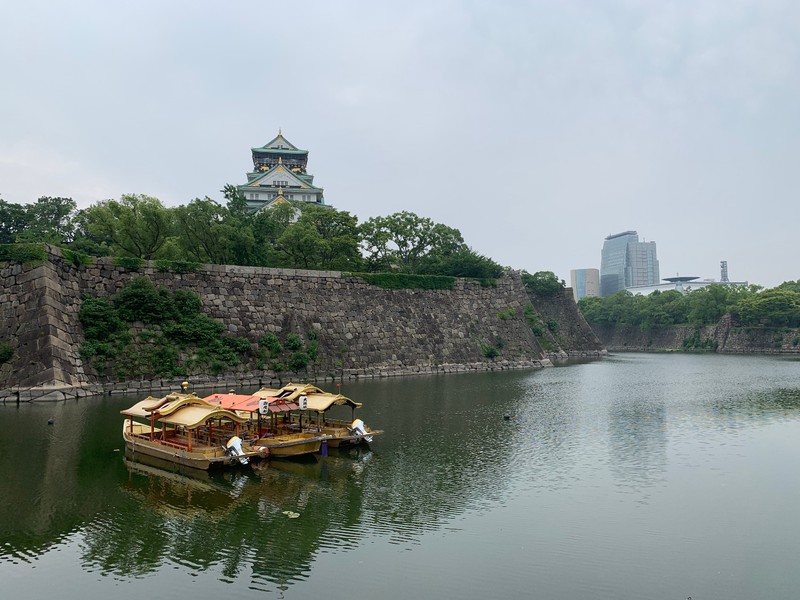 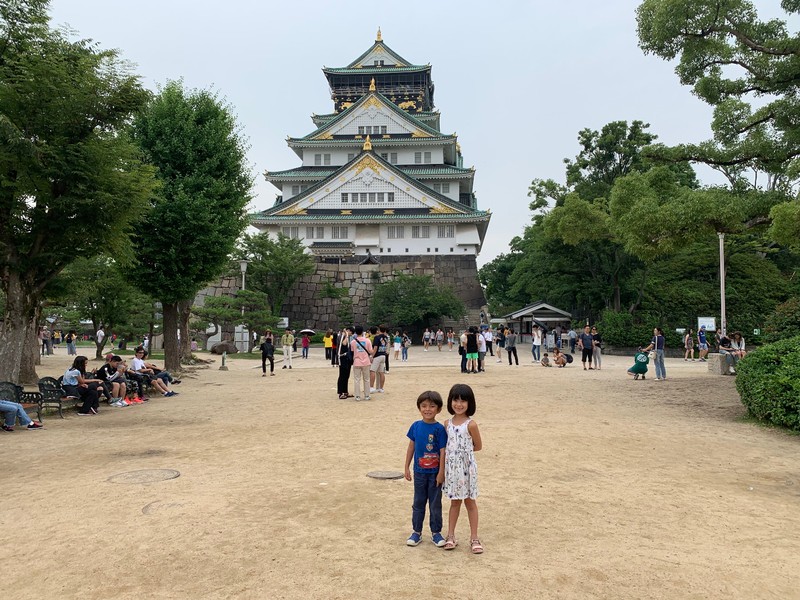 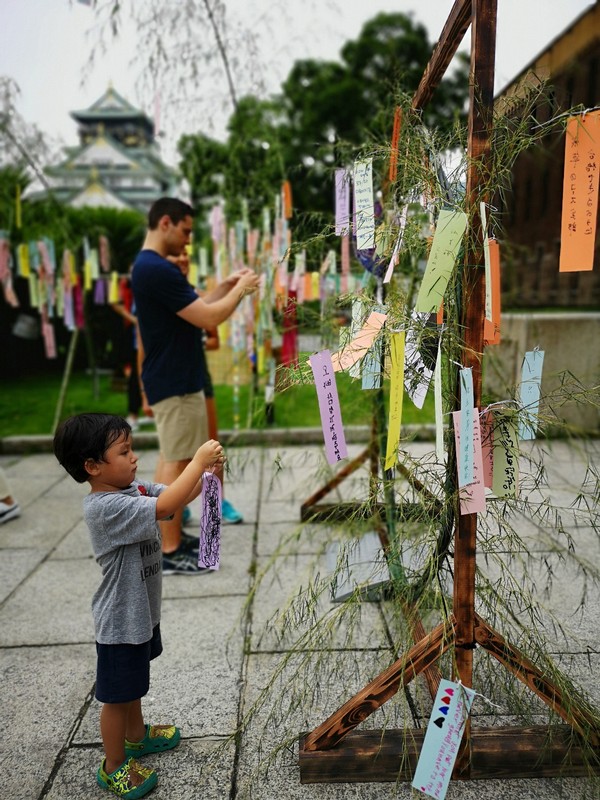 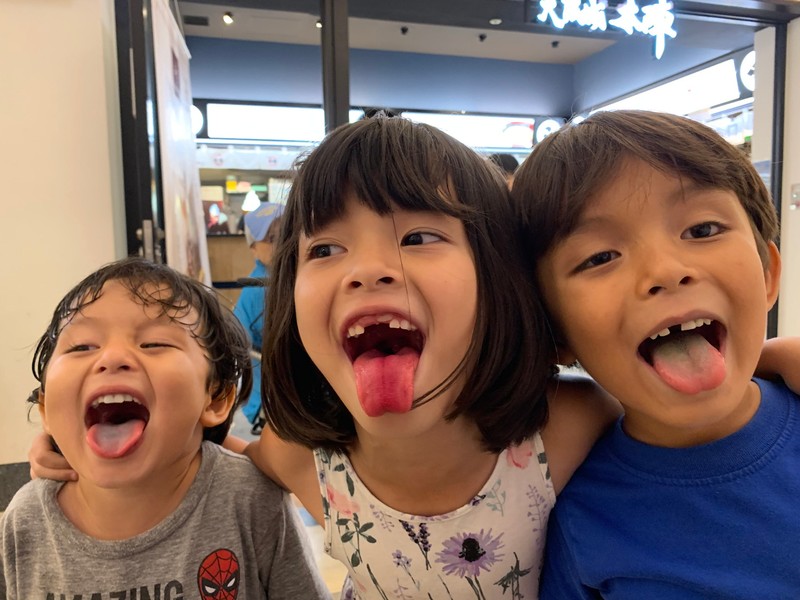 Just west of Tennoji is Ikuno, home to much of Osaka's sizable Korean community. Many Koreans emigrated to Japan in the early part of the 20th century as menial laborers subsequent to the Japanese annexation of their country. The Tsurahashi district in the northeastern corner of Ikuno Ward is almost entirely Korean and contains Osaka's most vibrant and authentic market. Close to the Tsuruhashi metro station, the neighborhood changes from typical Japanese streets into a maze of narrow pedestrian alleys that have been converted into arcades lined with Korean businesses. Naturally the main event is food and produce, but housewares and furnishings are also sold. It was similar to markets we'd seen in Seoul such as Namdaemun and Dongdaemun, although smaller. 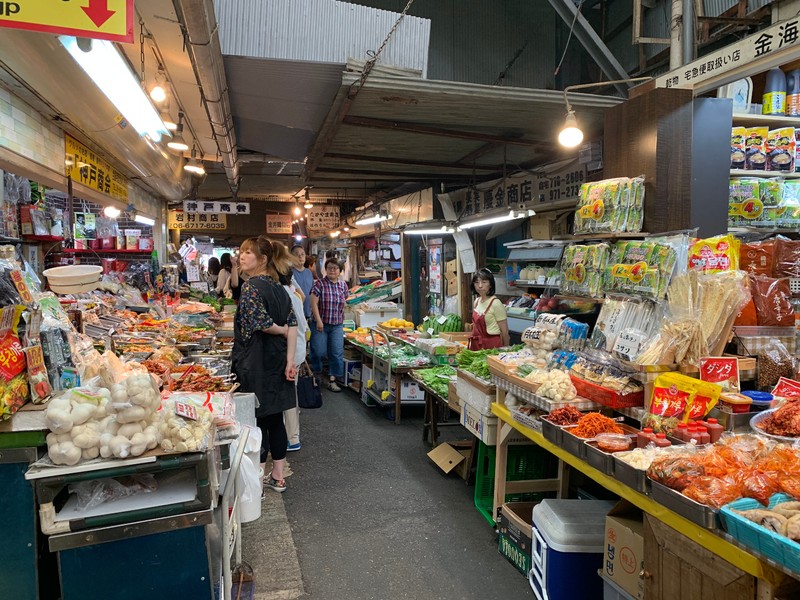 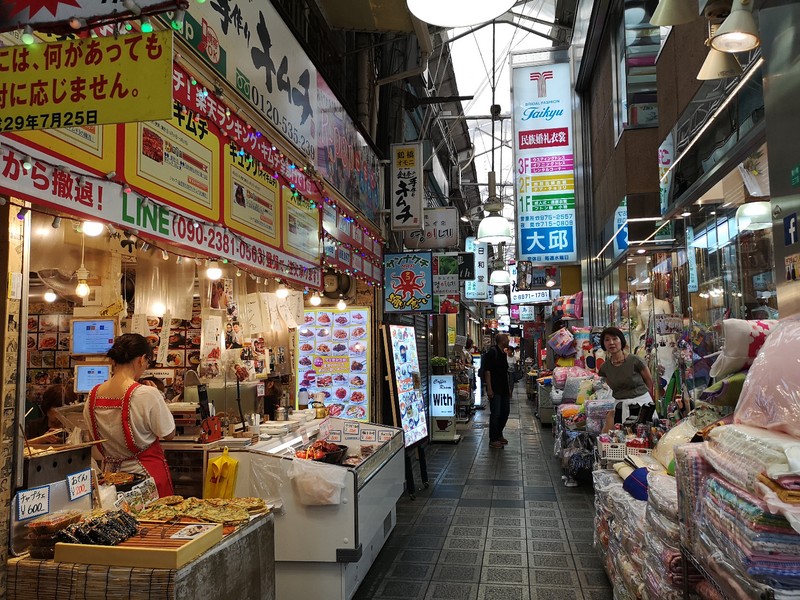 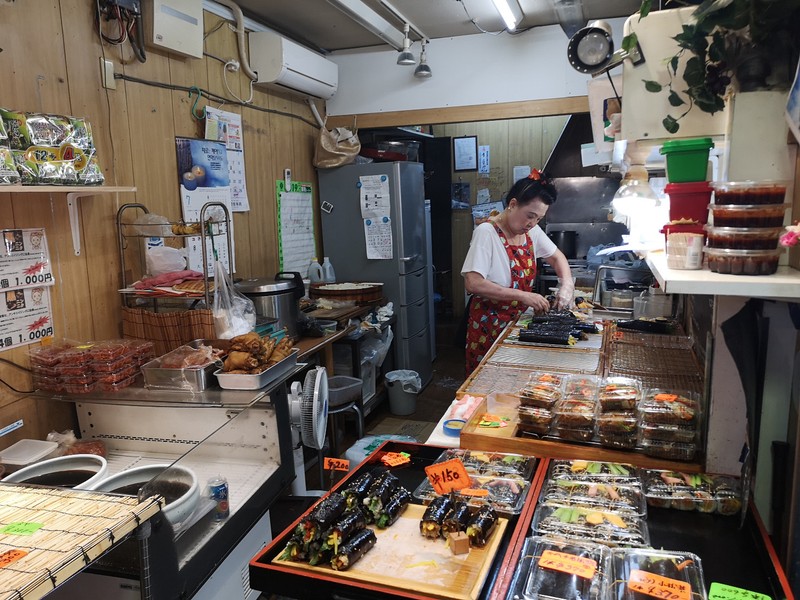 At the eastern end of this nest of alleys is the wholesale fish market, which in true Japanese style is virtually closed down by noon. We were early enough to catch it on our second attempt but it was a bit of a letdown in both size and variety. The only restaurant within the fish market was a coffee shop that didn't offer any cooked food. 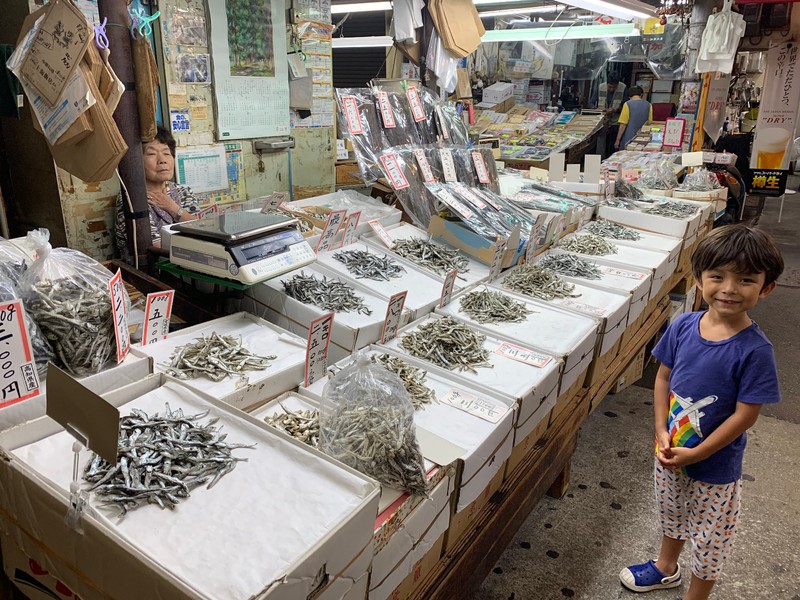 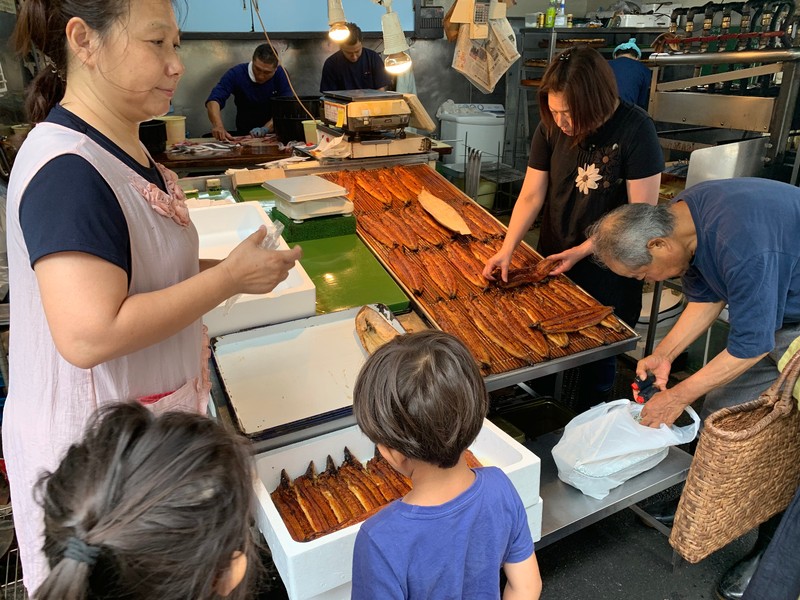 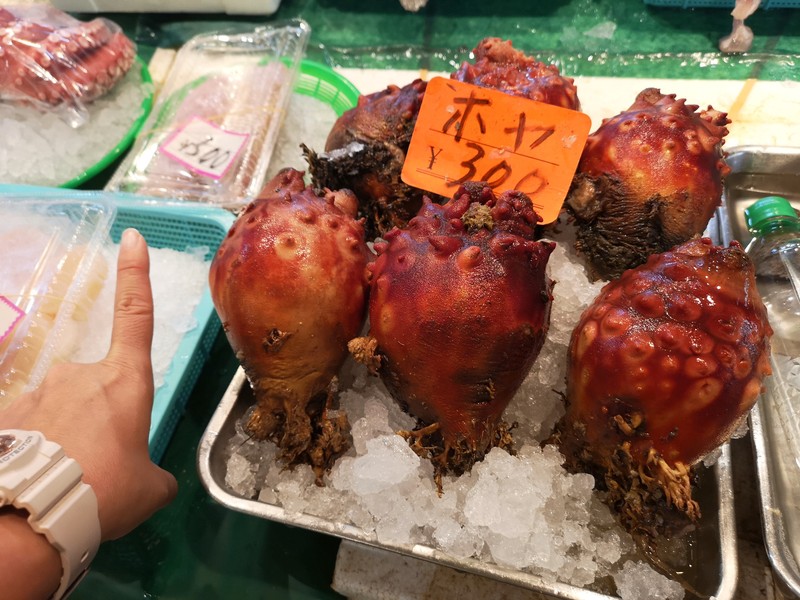 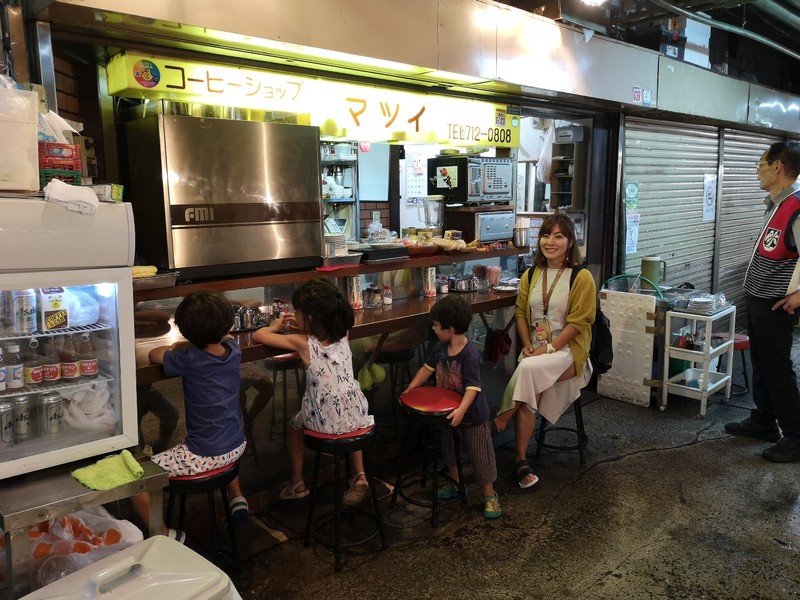 Undaunted by the absence of a seafood feast at the fish market, Mei Ling put her homing instinct to work and soon located a crowded Korean restaurant back within the main market. The spicy Korean food was a pleasant break from our lengthy submersion in Japanese cuisine and the authentic, energetic atmosphere couldn't be beat. 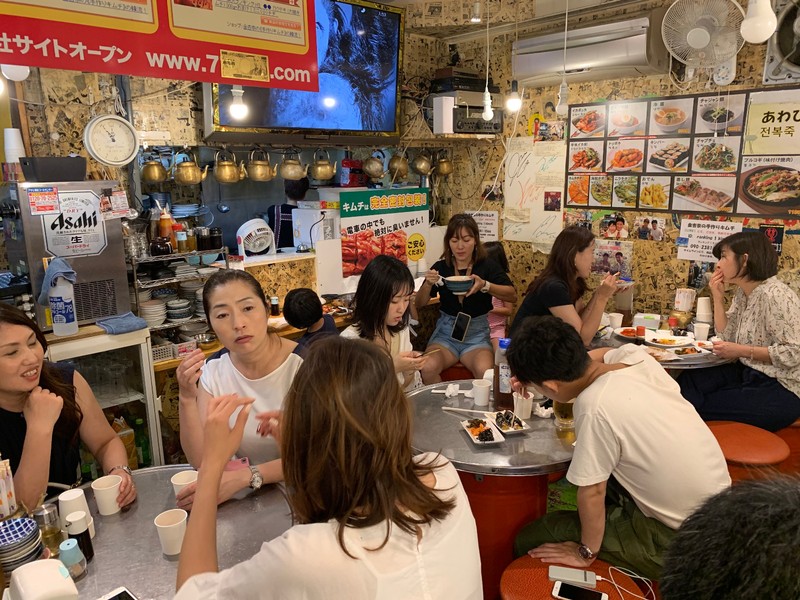 South of the market the neighborhood quickly changed into a rather boring residential area. Fortunately we decided to return to the station along the neighborhood's main street where we encountered an unexpected crowd at one intersection. A banner across the cross street announced we had arrived in Korea Town and we realized we were at the beginning of a long alley lined with Korean restaurants and businesses. I hadn't realized that Korea Town referred to a specific pedestrian street as well as to the market and the neighborhood. We'd almost missed one of the best parts of the experience and just stumbled on it through dumb luck. Humbling. The street is nameless on Google Maps but locals call it Miyuki-Dori (Google will take you to a completely different place with that search entry). We walked about half a kilometer along Miyuki-Dori to the Hirano River enjoying kimchi samples and other snacks for the entire length of the street. Ian was in heaven because he loves kimchi but all the kids were ecstatic when we bought a cotton candy rabbit from one of the street vendors. 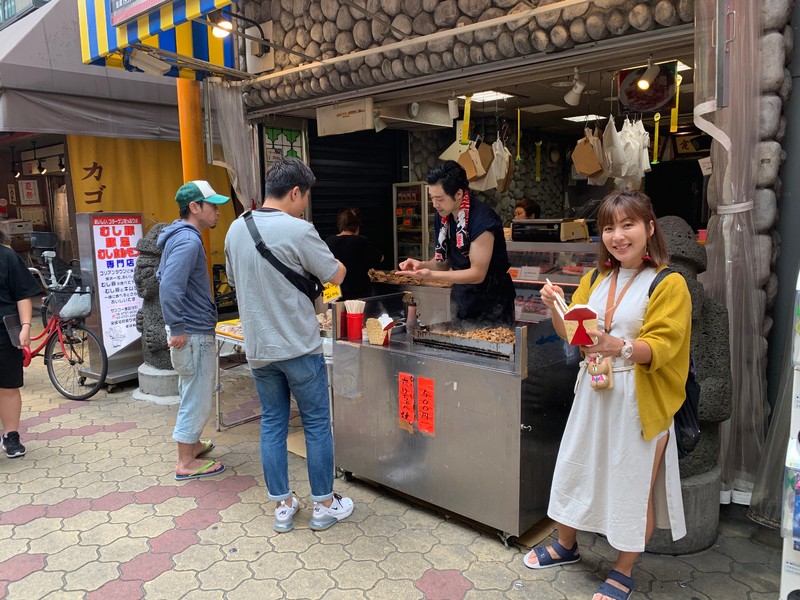 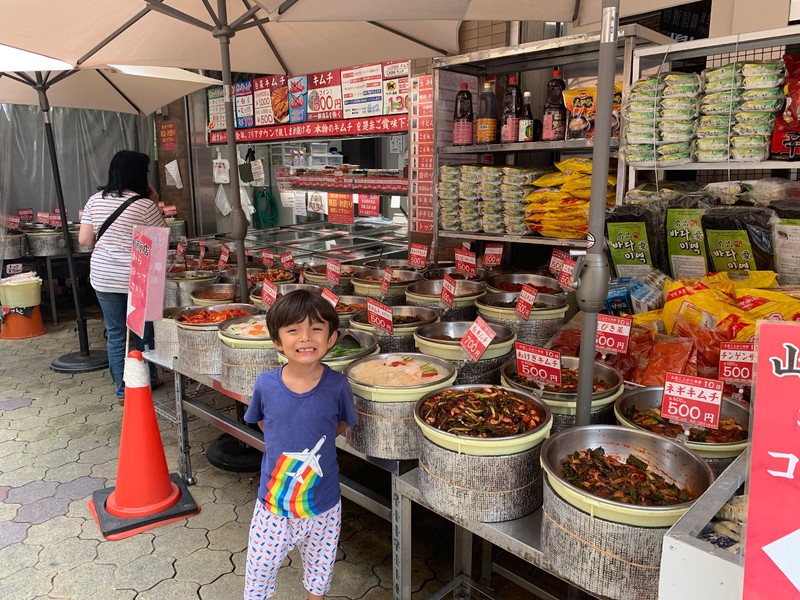 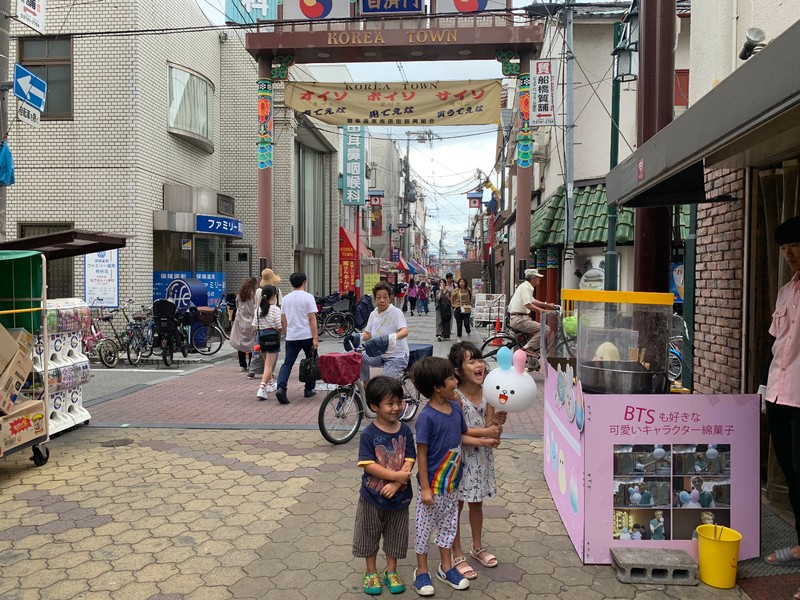 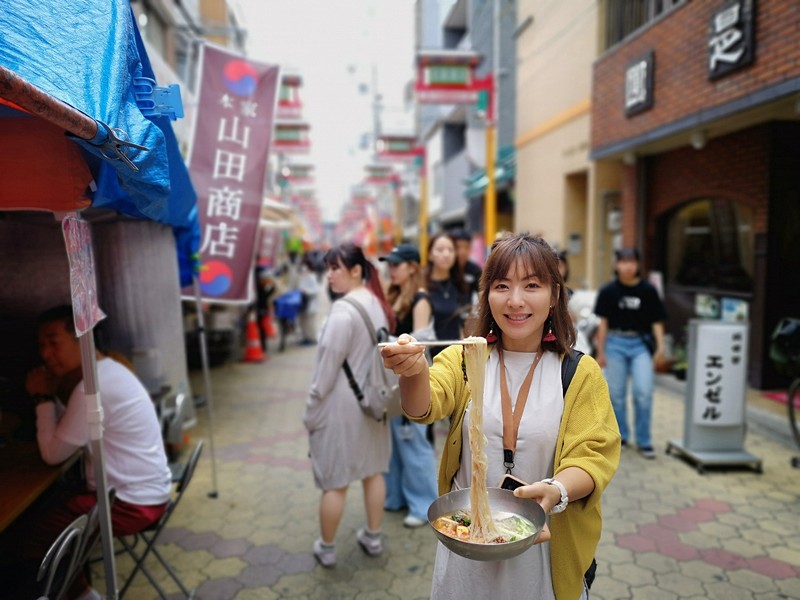 We had a long metro journey from western Osaka to Osaka Bay to visit the Kaiyukan Aquarium, one of the world's most highly regarded aquariums. Our last aquarium visit in Valencia, Spain had been disappointing so we were looking forward to making up for it in Osaka. The central feature of the aquarium is a 30 foot deep tank that holds two whale sharks, the largest species of fish in the world. We were fortunate to be there in the afternoon when the otters and fish were feeding. The larger fish like sunfish and rays were being hand-fed by divers. It was amazing to see the affection of the divers for these gentle giants of the ocean as they made sure all of them got their share of food. The walkway wound around the enormous central tank allowing close inspection of the beautiful rays and sharks from above and below. It was the best aquarium I had visited since Lisbon five years previously. 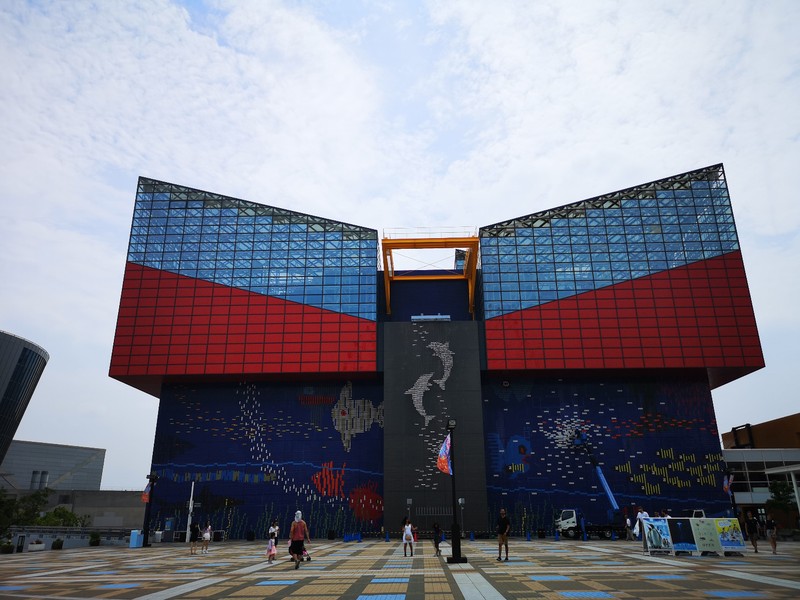 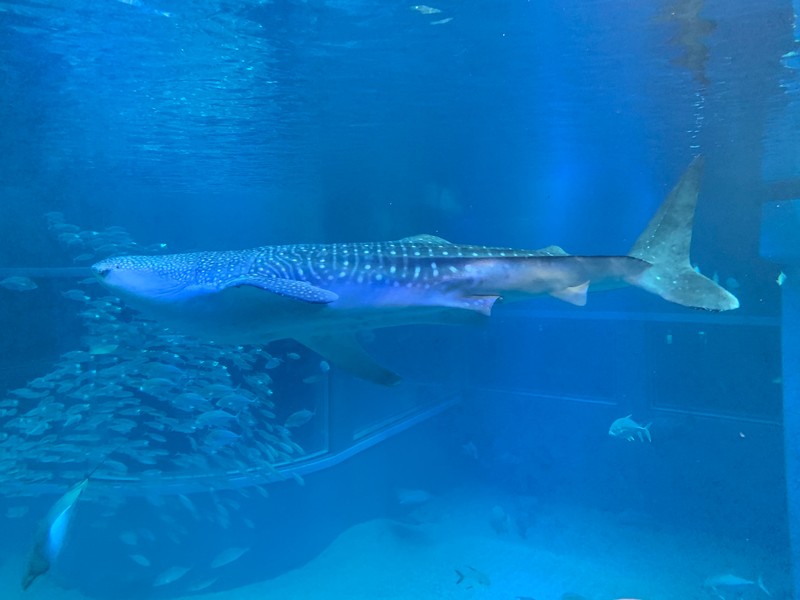 Outisde the aquarium we stopped to watch a juggler toss some torches around while balancing on a rickety ladder. He either wasn't very adept at it, or it was all part of the act to keep people wacthing. Either way it was quite entertaining. On the opposite side of the plaza is the Tempozan Marketplace, a collection of fairly boring stores and coffee shops. At the very back of this mall is Naniwa Kuishinbo Yokocho, a food court composed of narrow, dim alleys intended to convey an authentic impression of mid 20th century Osaka. We probably would have been more impressed if we hadn't already been submerged in delicious food in the far more energetic areas of Namba and Dotonbori. As it was we found a bowl of noodles for the kids and moved onward. We also passed on the landmark Tempozan Ferris Wheel adjacent to the mall, knowing that there would be more exciting adventures awaiting us no matter where we chose to go next in Osaka.