I normally fit about two days of travel into a blog post, sometimes three, so it's strange to find myself working on my third blog post about the four days we spent in Dalian. I never expected there to be so much worth seeing and so many opportunities to take great pictures in this unheralded city. I'm not usually a history buff but I was motivated to look into Dalian's past to try to understand how it became such a unique place. I learned that thanks to its strategic location on the Bohai Strait, Dalian passed through a number of powerful hands in the late 19th and early 20th centuries. The British, the Russians, and the Japanese all controlled the city between 1858 and 1945. There are still some architectural remnants of these occupations in the city, but I couldn't see how that distant past had much influence on the fascinating landscape of modern Dalian. Fortunately I have the best research resource a traveler could ask for, my Chinese-born wife, who could provide more insight into this recent transformation than a hundred hours on the internet.

Dalian's location and history of occupation probably made it a mildly interesting city to visit in the 1980's, but its captivating skyscrapers, squares, and parks are a much more recent development. Essentially all of this can be laid at the feet of one formerly illustrious mayor of the city, Bo Xilai. Bo was a scion of a prominent Communist Party family which was purged during the Cultural Revolution. He emerged from a labor camp in the 1980's and worked his way back into the Party, now that the pendulum had swung in another direction. Despite an apparent lack of connection to Dalian or Liaoning Province, Bo was assigned to a government position in the area and worked his way up through party ranks to become the mayor of Dalian in 1992. He oversaw the construction of Xinghai Square at the site of the former city garbage dump and was also responsible for the creation of Labor Park and several museums. In 2001 Bo became governor of Liaoning and in 2007 he ascended to the highest level of the Chinese central government. Between 2007 to 2011, he was the most prominent rising political star in China and many assumed he was on his way to being president. All of that ended in 2011 with a murder scandal that led to uncovering of widespread corruption and eventually life imprisonment. It seems that during Bo's few years of enormous power he decided to make Dalian a showplace of modernization, likely intending to use the city as a staging ground for a run at the presidency. Once he was a member of the Politburo, Bo likely diverted domestic financial resources to Dalian and also was involved in numerous foreign investment deals which led to the enormous number of skyscrapers that are still being built. Whether the city can sustain its growth now that its benefactor has been disgraced remains to be seen. It seems impossible that there would be enough wealthy citizens and businesses to fill all the new skyscrapers, so perhaps Dalian is destined to become a futuristic ghost town. I feel fortunate to have been able to see the city in possibly its greatest moment.

We kicked off our last full day in the food court of a Chinese department store not far from Eton Place. I'd seen how China was developing these food courts along the model of Japan and Korea two years earlier in Mudanjiang, but the size and sophistication of this display was quite impressive. There was a mouth-watering selection of produce, delicatessen items, and freshly-prepared fast food that was fundamentally Chinese but had enough international spin to generate a cosmopolitan atmosphere. Just as striking was the liveliness and amount of foot traffic in the food court despite the relatively high prices. Ten years ago a scene like this would have been hard to imagine outside of Shanghai. 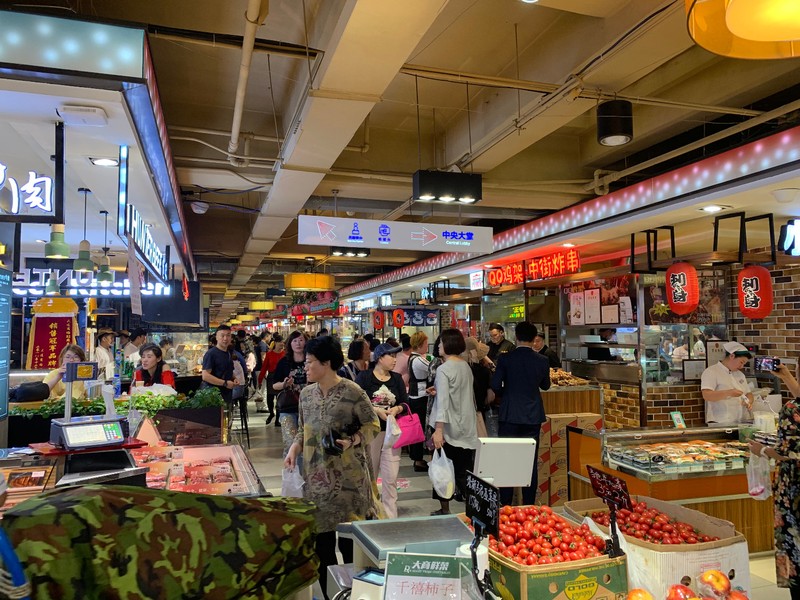 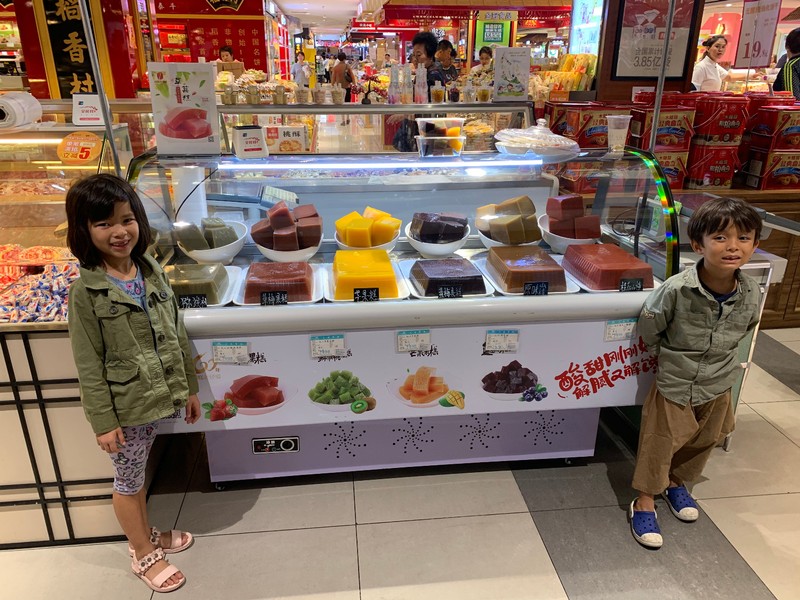 We had a long bus ride through the southern part of Dalian to the Laohutan Scenic Area. This part of the peninsula is filled with stocky little mountains that have residential communities packed into the narrow valleys between them. It wasn't unusual to see apartment buildings jammed up against steep hillsides and I wondered how safe they were from landslides. 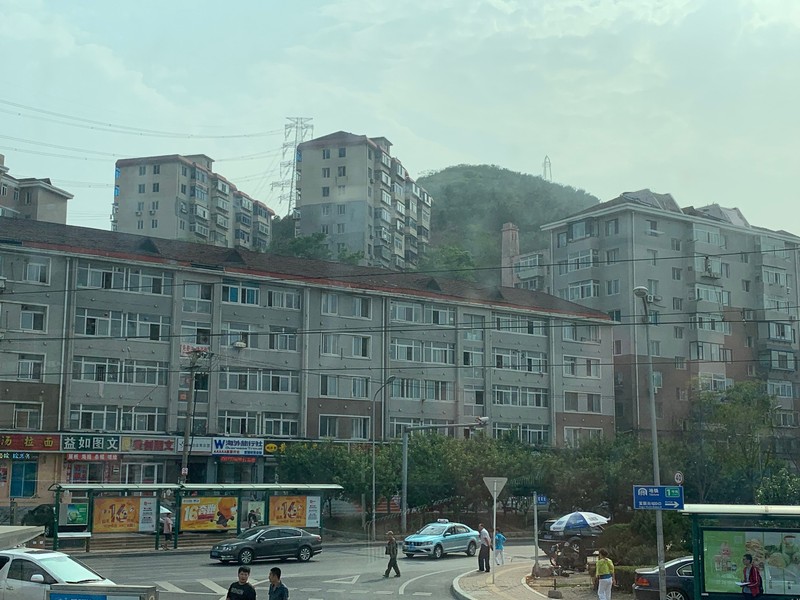 The bus dropped us off in front of Laohutan Ocean Park, an expensive theme park that contains an aquarium and a coral museum and features live performances with marine mammals. We had one of the world's most renowned aquariums coming up soon in Osaka so we gave the theme park a pass and walked across the bridge over the Ziyou Canal towards the famous sculpture that gives the area its popular name of Tiger Beach. The enormous marble tigers seemed to be leaping through the evergreens at the base of the hillside. A couple of souvenir vendors were demonstrating a styrofoam model plane and didn't seem to mind when the kids took it over. From the hill above us cable cars were transporting tourists across Laohutan Bay to the aquarium. 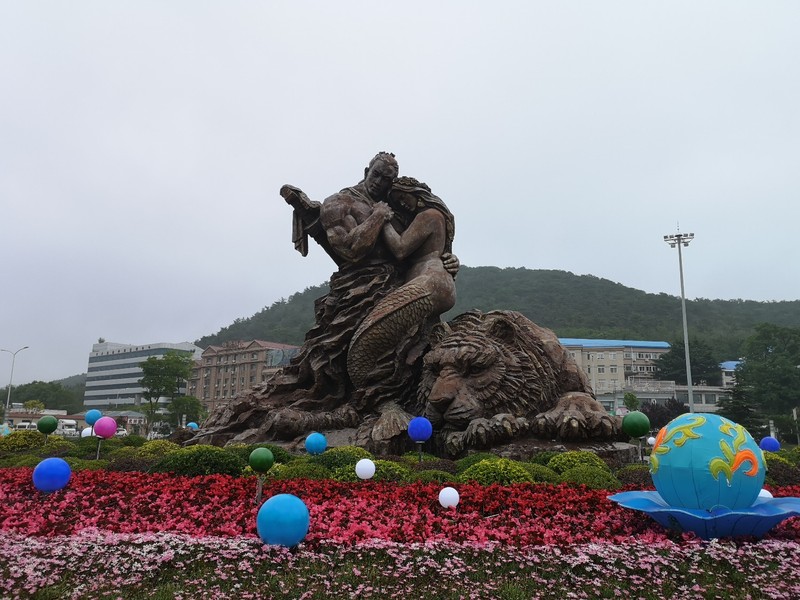 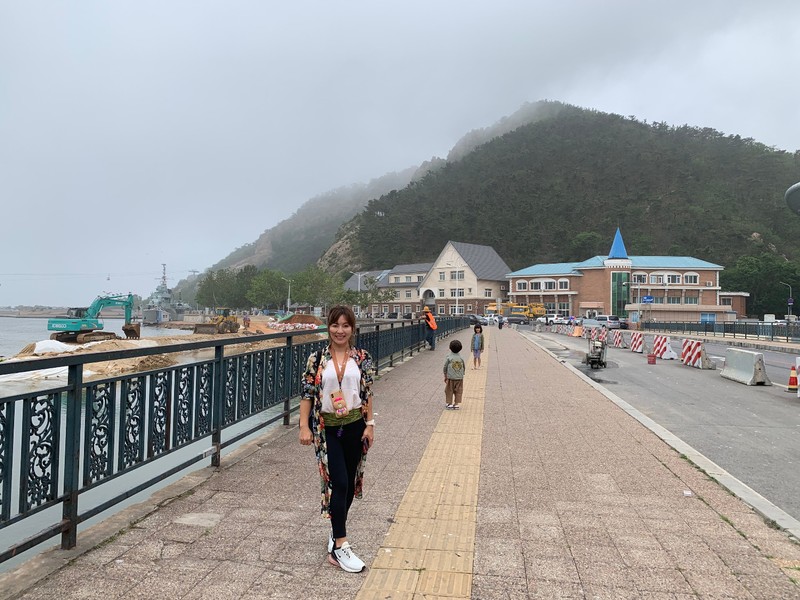 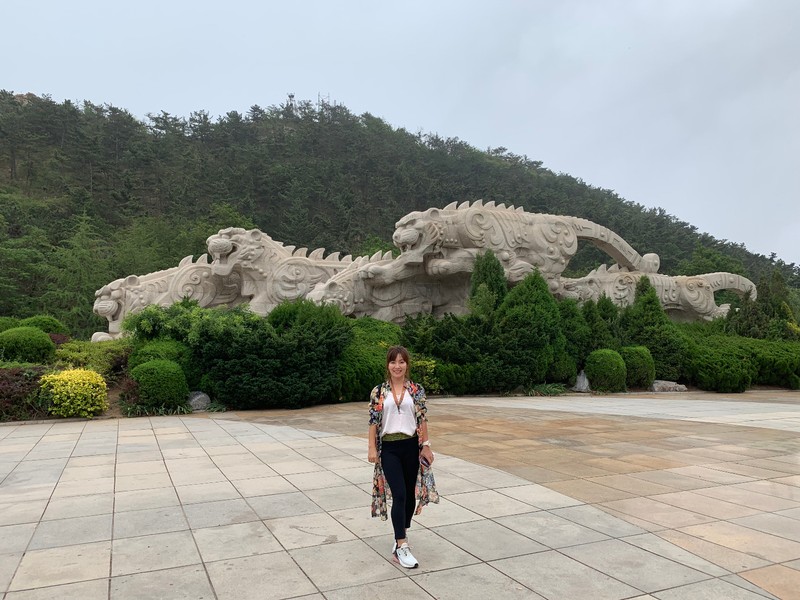 Close to the tiger sculpture is the entrance to Bird Singing Woods, which is part of Laohutan Ocean Park but has a much more reasonable entry price as an individual attraction. This is a quite impressive bird park housing thousands of birds on a steep hill covered in netting. There are apparently 150 different species of birds in the park, but the most prominent were guinea hens, spoonbills, and peacocks. Feeding the birds was encouraged, naturally with the birdseed that was on sale inside the park. The birds were quite experienced and aggressive and our kids were no match for them. 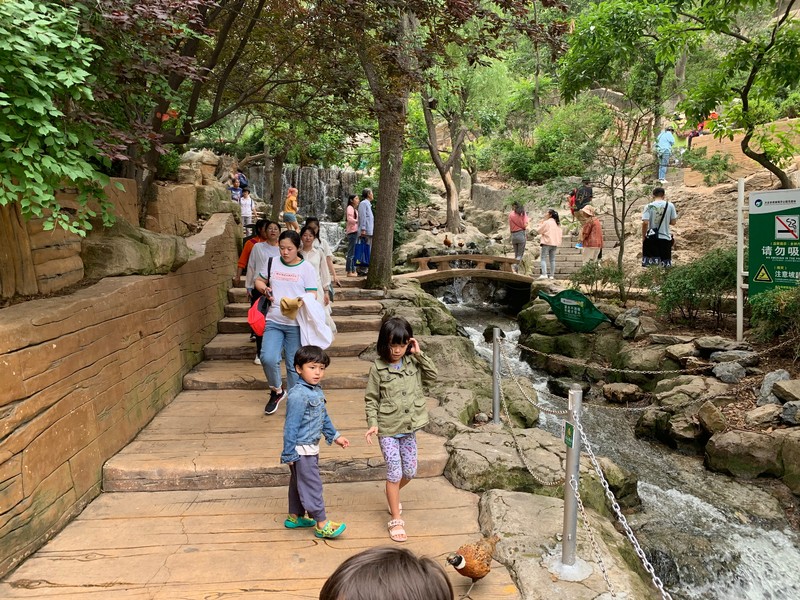 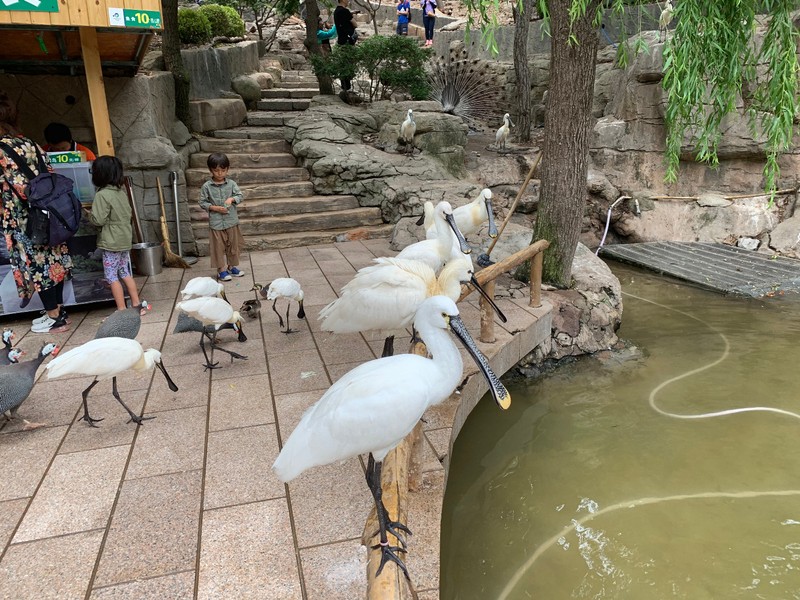 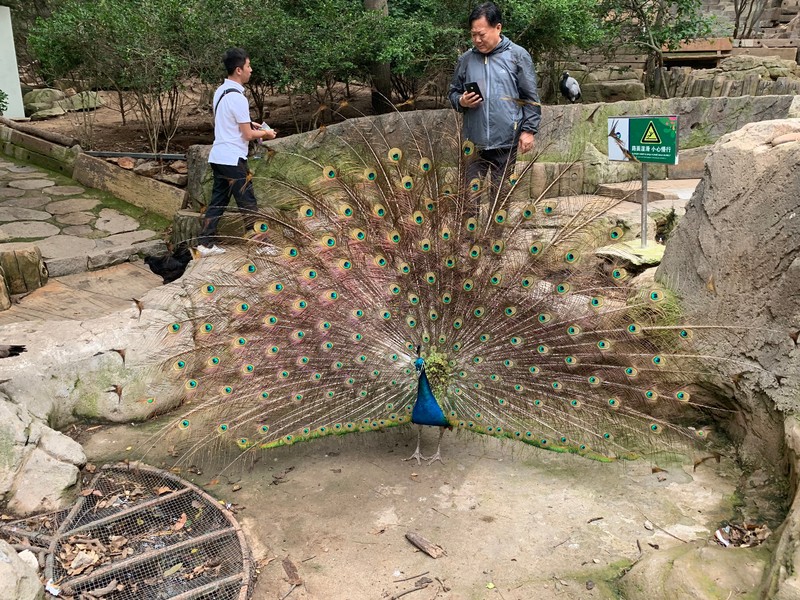 Most of the visitors stayed at the base of the hill but we followed the path to the top where the peacocks were clearly in charge. Even with their tails closed, these are incredibly beautiful birds and there were an amazing number of them perched on branches and railings. The netting filtered and diffused what little sunlight made it through the clouds and it was easy to forget that we were in a bird sanctuary and not atop a mountain far from civilization. 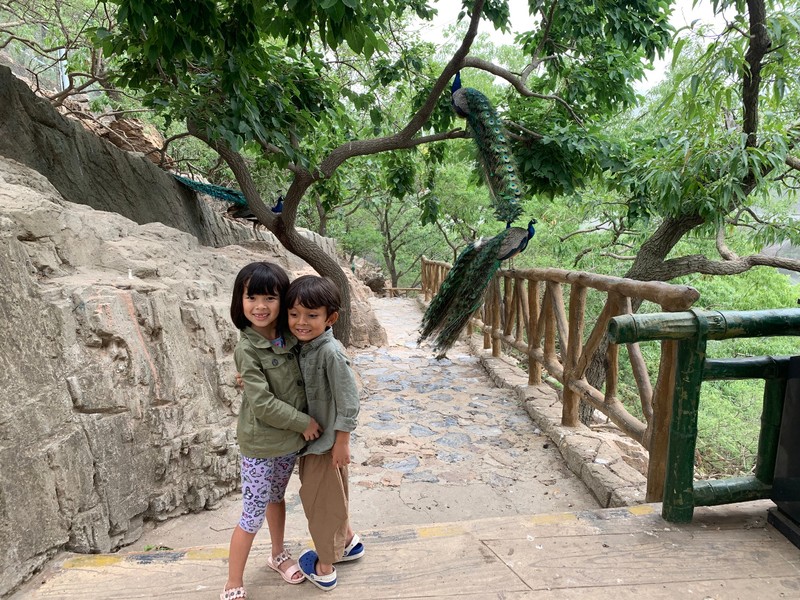 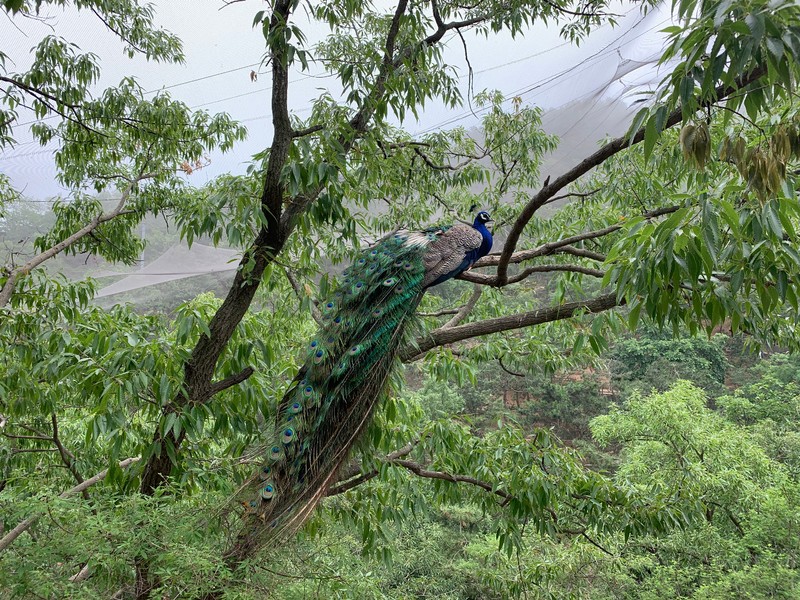 Back on ground level we were just in time to catch a show with parrots that were trained to fly into the crowd and ferry bank notes from the audience back to their handler. The combination of entertainment and con-artistry was quintessentially Chinese and I was happy to contribute all the small denomination currency I had to the endeavor.

The coastal drive through the mountains along Binhai Middle Road is supposed to be another highlight of Dalian, but we didn't see anything remarkable from the windows of our taxi. Eventually we found ourselves back at Xinghai Square, where we ate dinner at a Japanese restaurant and let the kids have another round of entertainment in the amusement park. It was a much foggier evening than our previous visit and the skyscrapers seemed like ghostly apparitions in the mist. 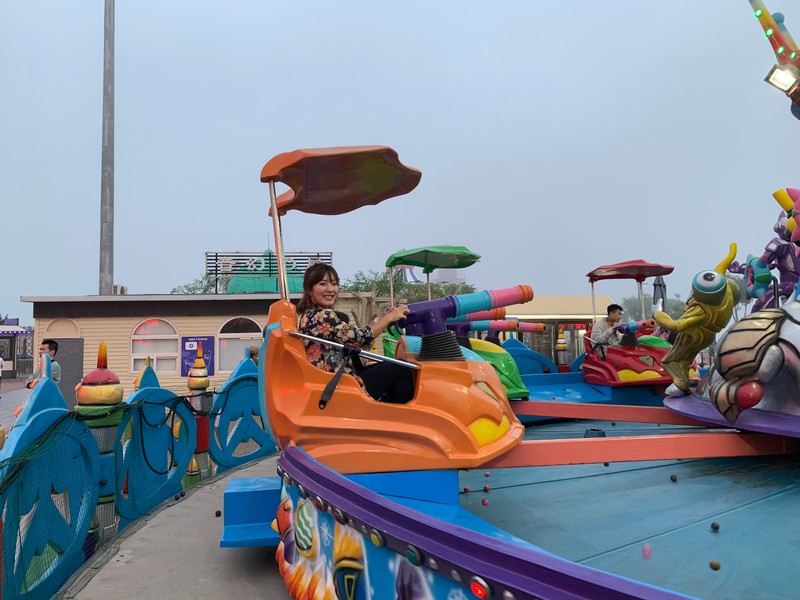 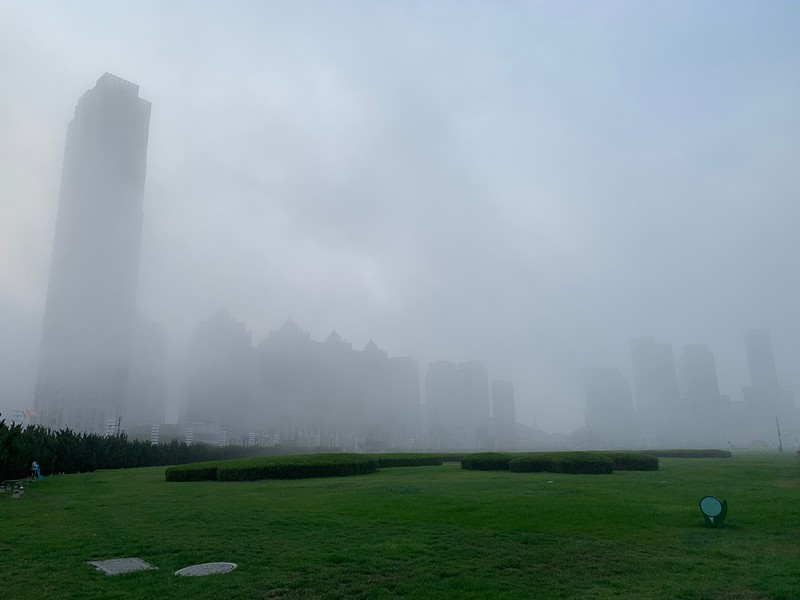 On our first visit to Xinghai Square we'd missed the evening light show at the fountain. As the moment approached, people began streaming to the center of the oval where there was an enormous circular pool. The water jets had already started to shoot into the air, illuminated in vivid colors and accompanied by haunting violin music. I tried to hold the kids back, expecting the crowd to become too dense for safety, but they were able to get all the way to the front. As the fog slowly lifted, the sparkling, disembodied cables of the Xinghaiwan Bridge came into view behind us. 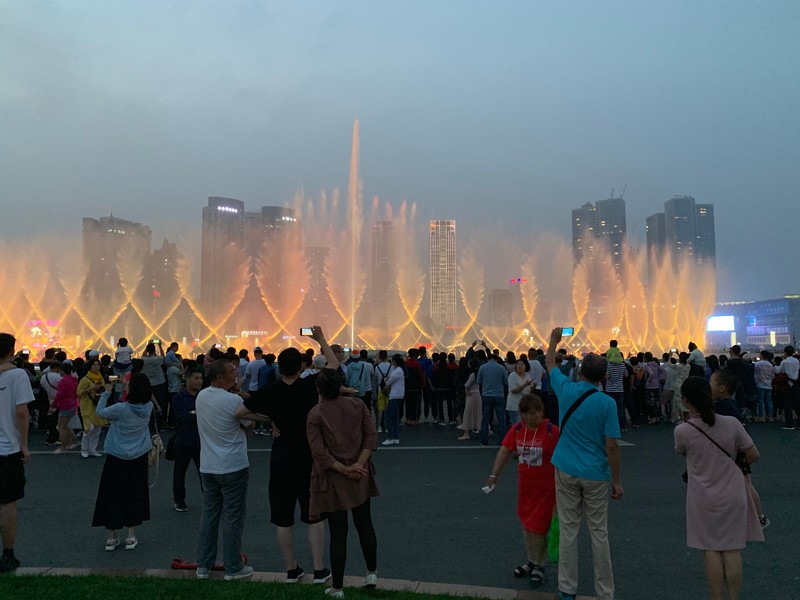 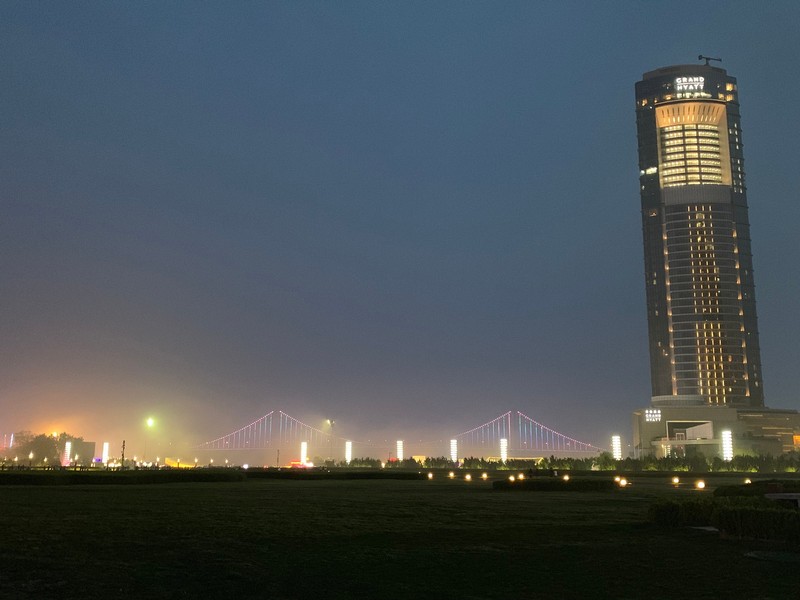 We had finally worn the kids out and by the time we had found our way back to Zhongyuan food street for a late snack the older two were out cold. In the morning we went straight to the airport for our flight to Qingdao. Mei Ling stopped briefly at a cosmetics counter at the mall in Eton Place where the salesperson's T-shirt provided us with an optimistic farewell from one of the most fascinating cities I've ever visited. 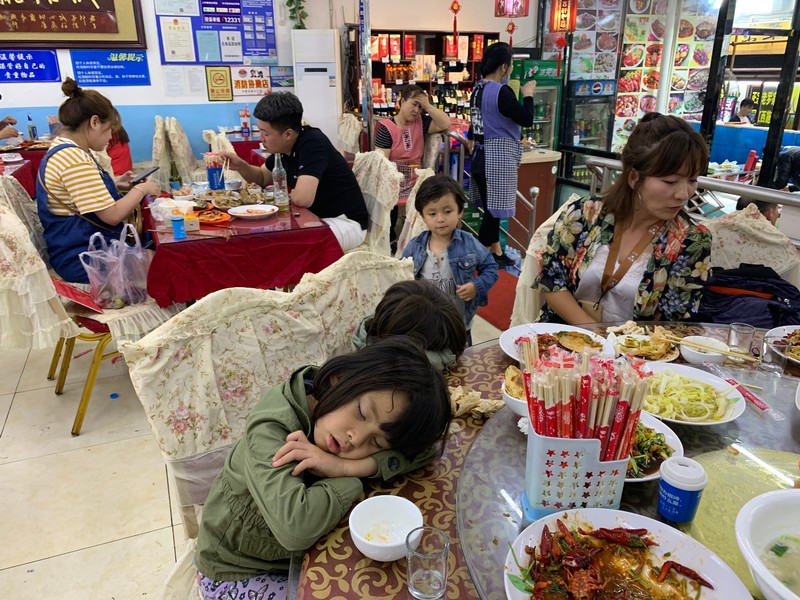 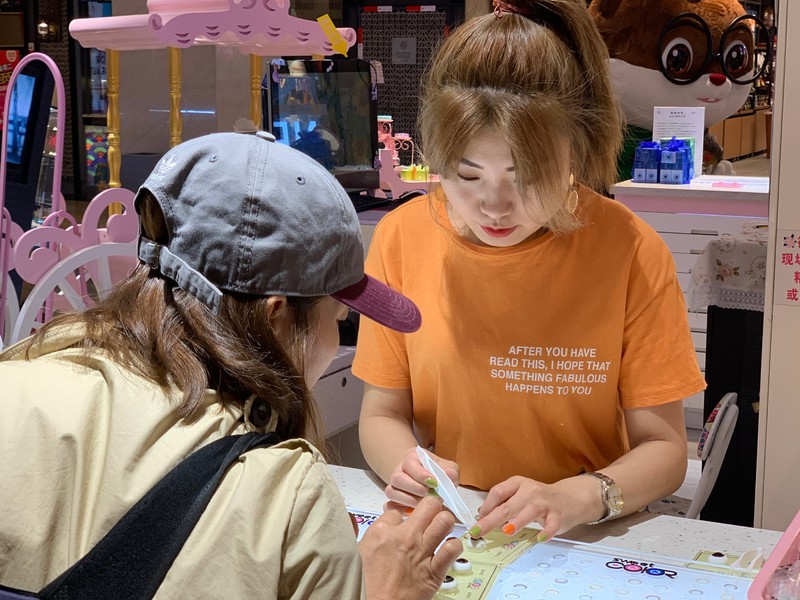 Posted by zzlangerhans 21:46 Archived in China