We awoke on our second morning in Dalian highly energized to continue our exploration of this dynamic and unpredictable city. We'd already seen the major municipal produce market, but we found a smaller one in the opposite direction from Eton Place. I don't think I could ever get enough of the colorful celebration of our earth's variety of fruits and vegetables that a Chinese market presents. We've embraced that variety at home as well as when we travel. Fortunately in Miami we have access to probably 90% of the common edible fruits and we have about thirty of them in our regular rotation. One special attribute of China is the huge selection of green vegetables that gives every meal an individual imprint, and that diversity was on full display here as well. 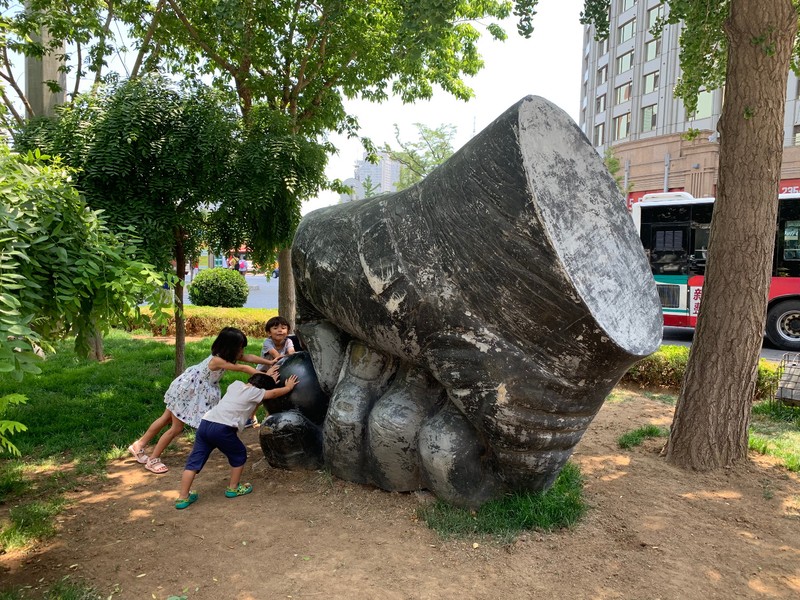 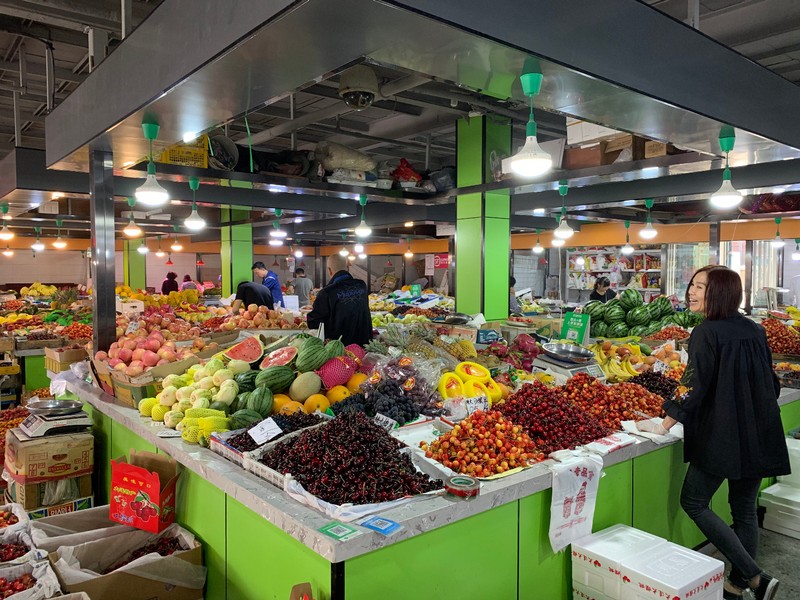 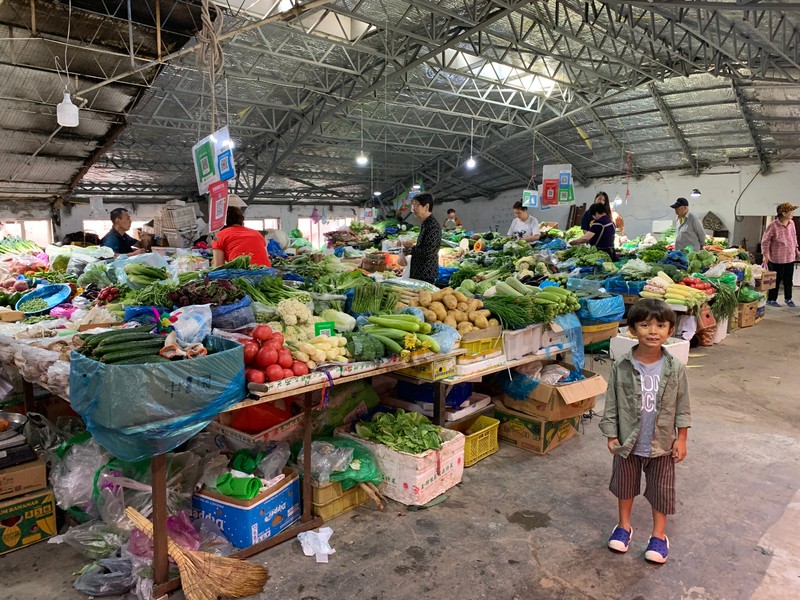 We had a lunch of barbecued lamb in a Uyghur restaurant incongruously located on Dalian's famed Japanese street. The street itself was a rather unimpressive collection of seedy bars with Japanese-style fronts, but the food made the detour worthwhile. 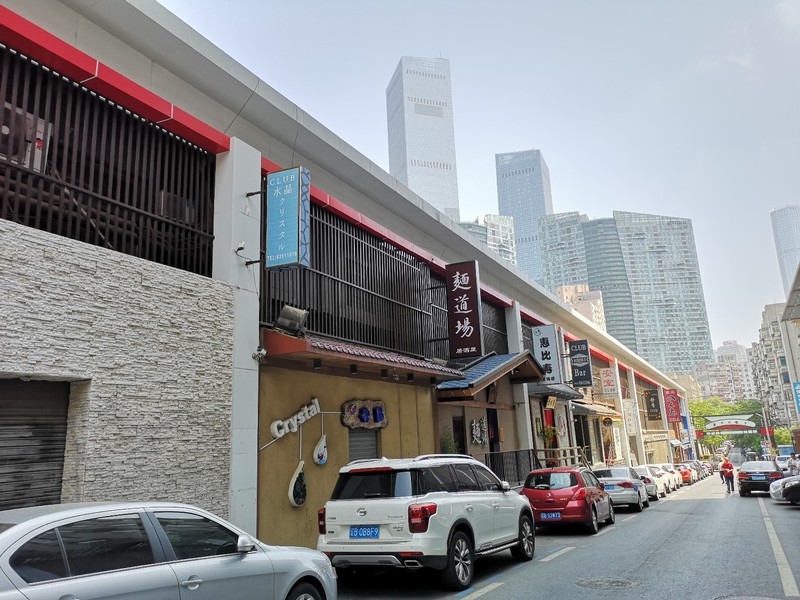 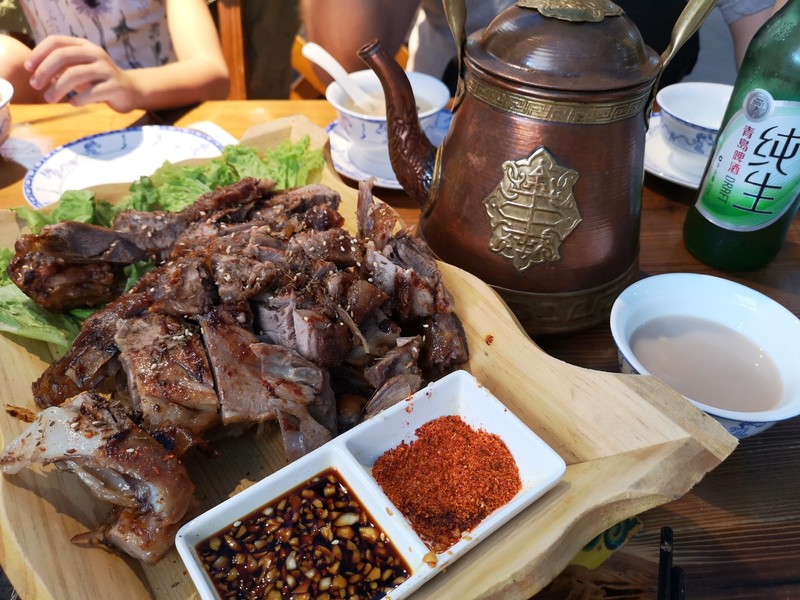 Labor Park, or Lao Dong in Chinese, is the largest city park in Dalian. I enjoy taking the kids to parks when we travel because they're beautiful places where we can join with the locals in recreational activities. Labor Park was a real stunner, beautifully-maintained with colorful landscaping and intriguing paths. One of the first paths we came to was a beautiful, striped golden walkway that I tried to convince the kids was the Yellow Brick Road from the Wizard of Oz. Cleo is too old now to be tricked so easily and quickly noticed there were no bricks. The lush vegetation was complemented by the diverse and magnificent skyscrapers that surrounded the park. 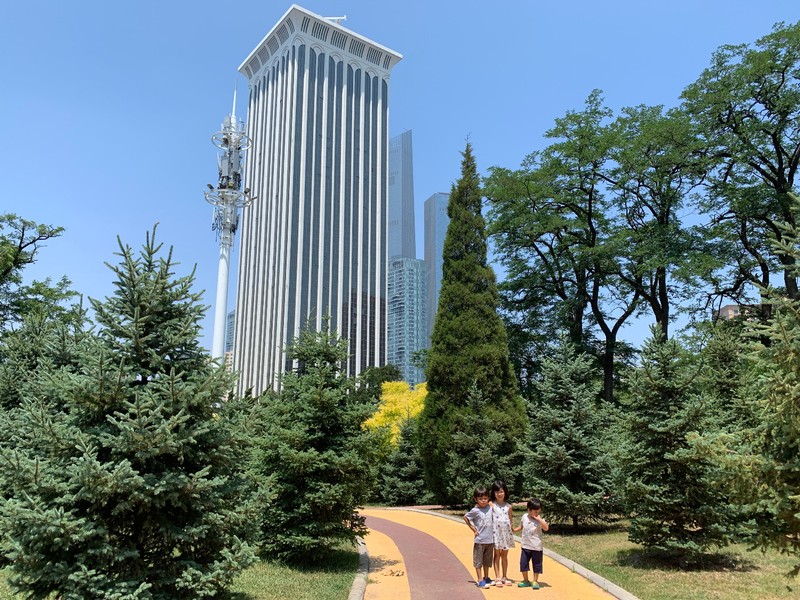 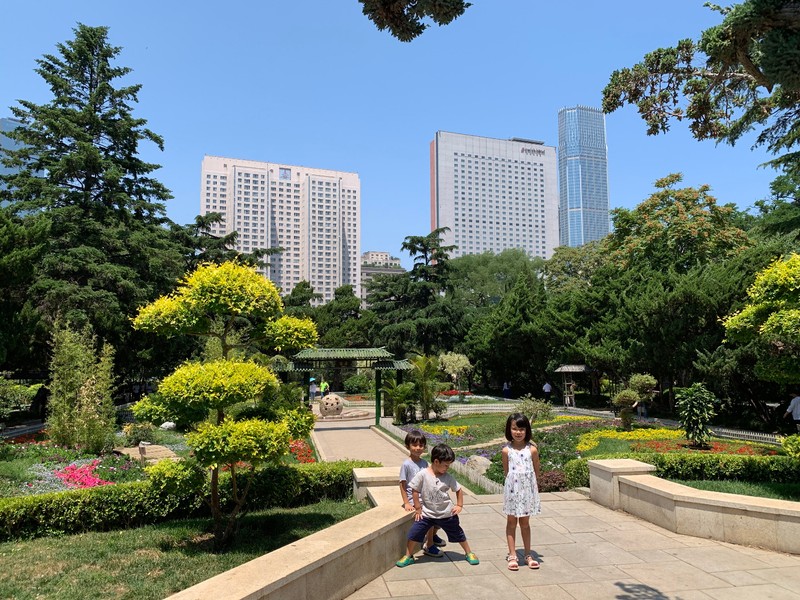 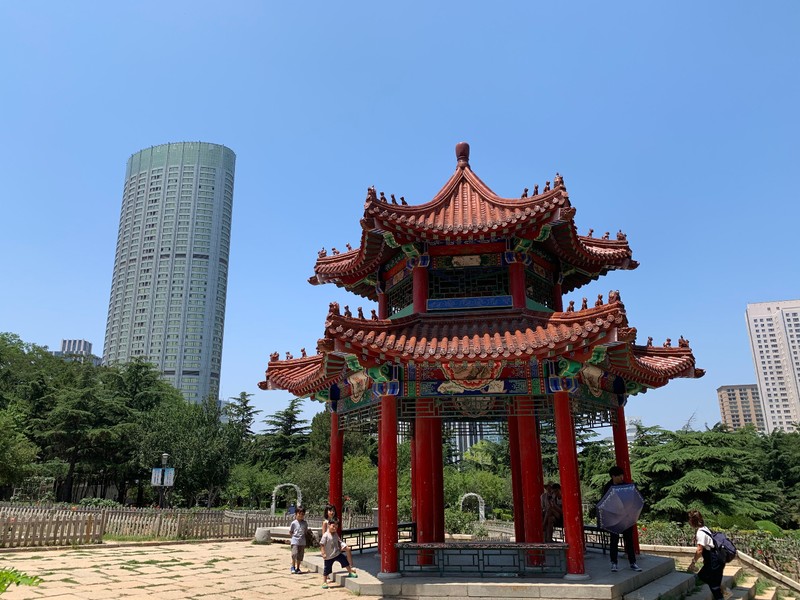 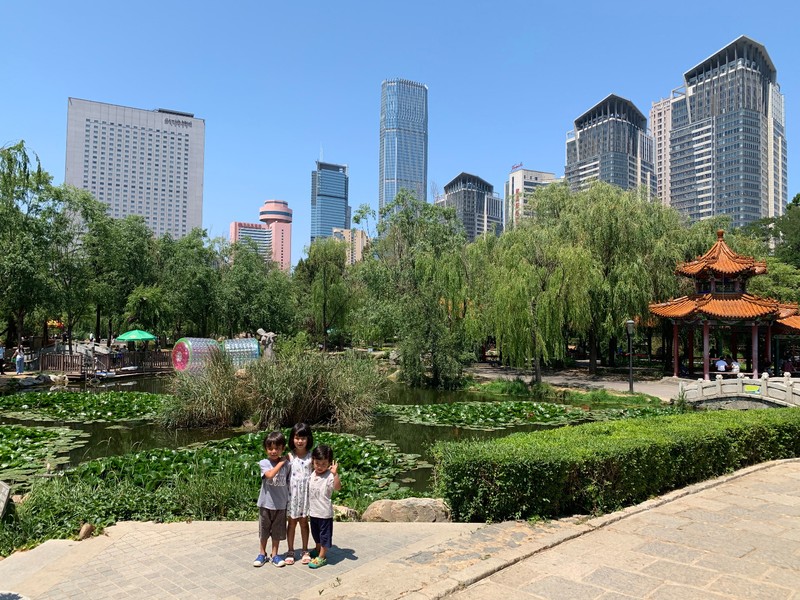 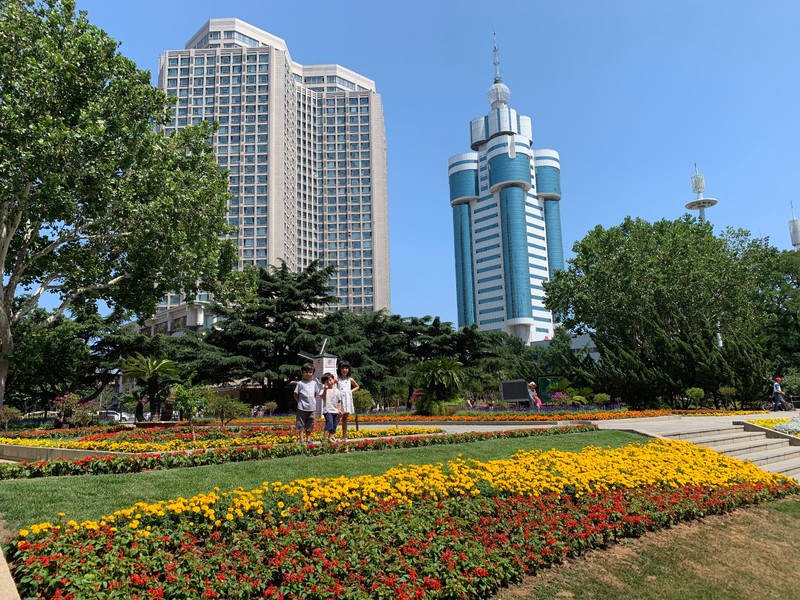 Labor Park was magical in many ways. Aside from the glorious landscapes, we encountered many groups of locals engaged in various artistic activities purely for their own pleasure. In one pavilion a group of middle-aged people were dancing to traditional music and they were happy to let our kids join in. Just a short distance away another group was dancing with colorful silk scarves and they very amicably encouraged the kids to join them in that activity as well. Next were two very ordinary-looking guys performing a synchronized hip-hop style modern dance to Chinese music with very serious faces. Were they practicing for some kind of a show, or was that just their way of getting exercise? One thing for sure they weren't doing was putting on a show for tourists, as we were the only Western tourists we saw in the park that day and no one else was paying the dancers the slightest attention. These kinds of sights are common in Chinese parks, but we've never encountered such a diversity of performances in one place as we did in Labor Park. It was great to see our kids having so much fun and at the same time having a completely natural immersion in one of their ancestral cultures. 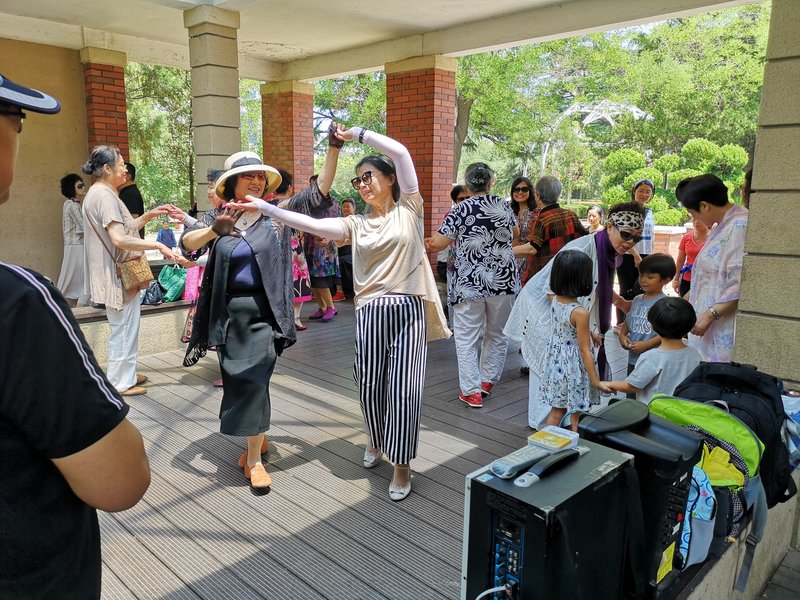 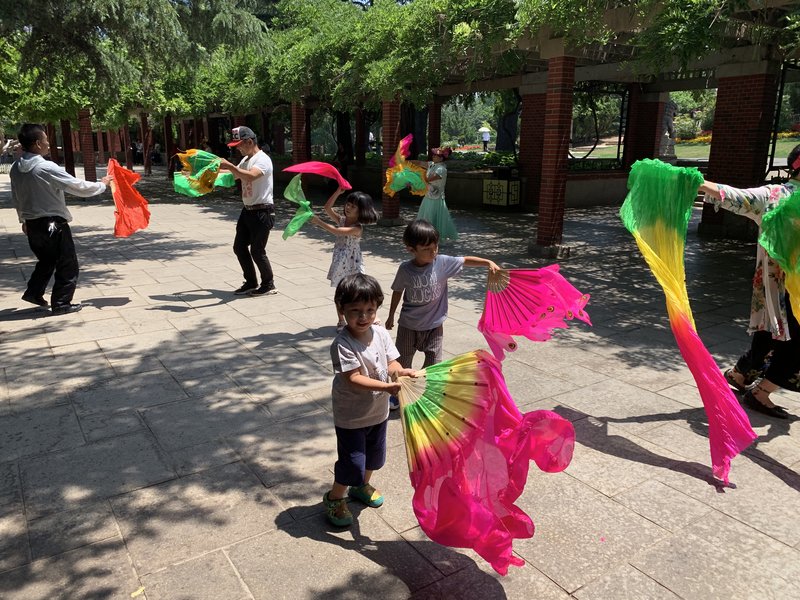 From the park we walked towards the center of downtown Dalian. On the way we encountered a seafood restaurant where we had the most delicious plate of boiled crawfish I've ever tasted, with all due respect to Louisiana. The garlic seasoning and the firm texture of the crustaceans were incomparable. 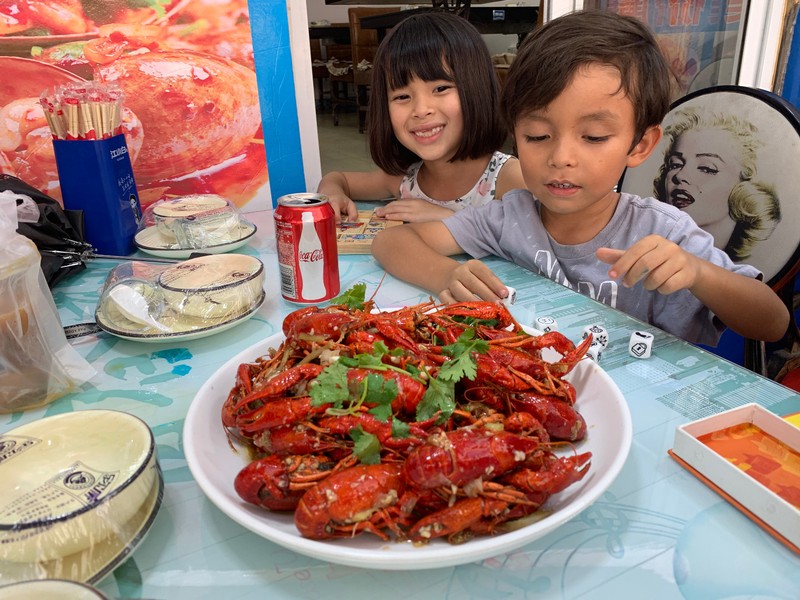 We passed through Youhao Square where a giant spherical sculpture rests on five upturned hands, intended to signify the solidarity of five continents. I'm not sure if it was Australia or another continent that was excluded. 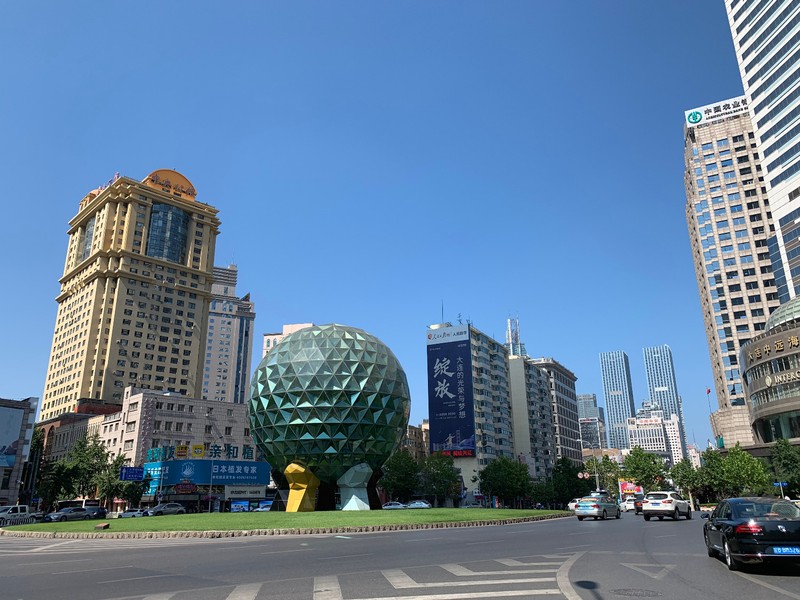 The ultimate destination of our walk was Zhongshan Square, a major downtown hub that is representative of Dalian's evolution from a Russian outpost to a Japanese colony to a modern Chinese metropolis. The square was initially constructed by the Russians at the end of the 19th century, but most of the buildings adjacent to the square were constructed by the Japanese. These buildings have all been repurposed by the Chinese as banks and government offices, and sleek modern skyscrapers now form an interesting backdrop on every side. 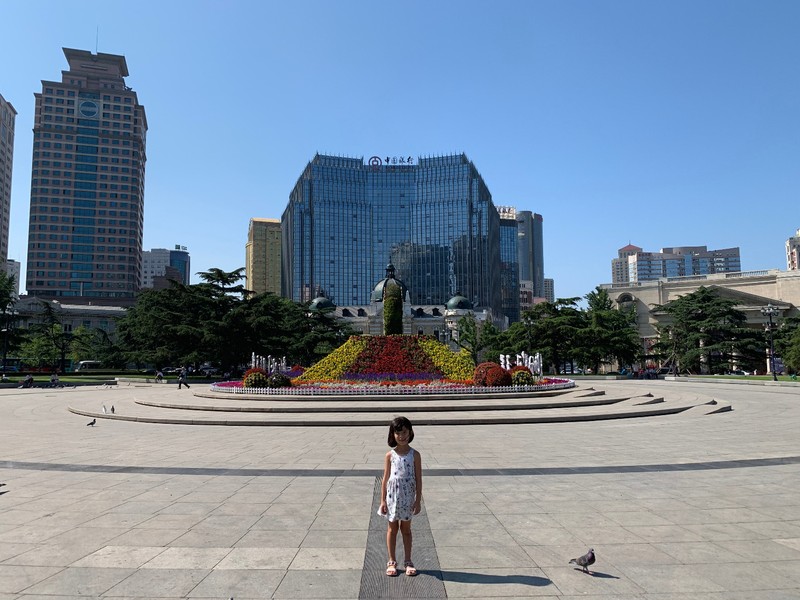 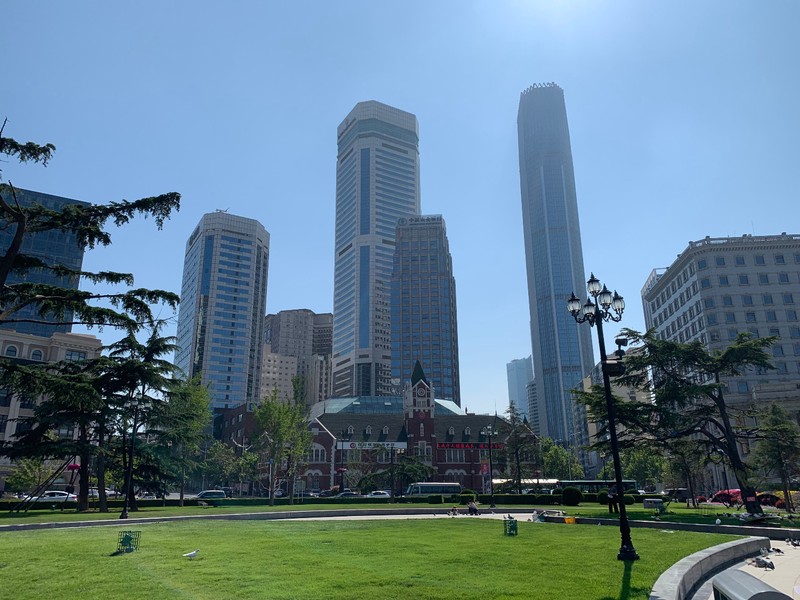 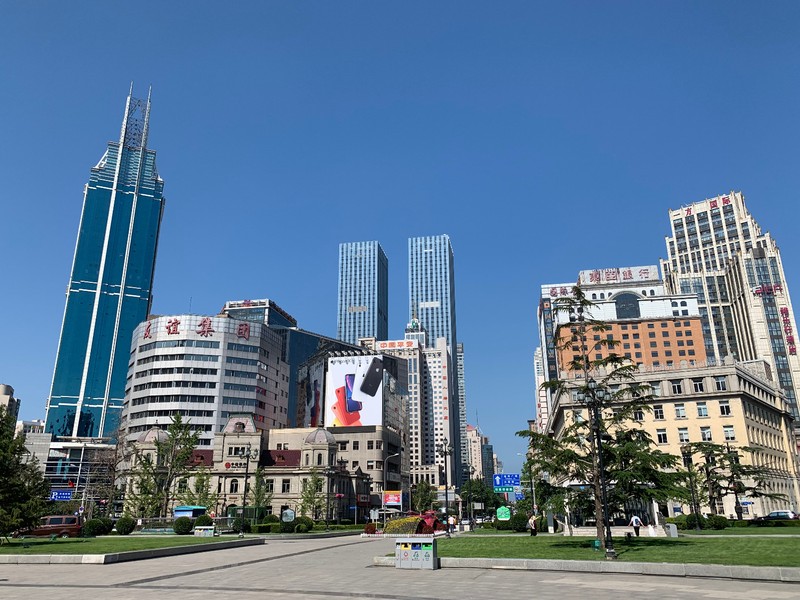 At one corner of the square a guy in army fatigues was selling packages of bird seed. The pigeons in the square were fearless and flew onto the kids' palms, shoulders and heads much to their delight. A group of young people arrived in the square for a modeling shoot and asked Mei Ling if they could include our kids in some of the photos. Spenser turned out to be a natural. 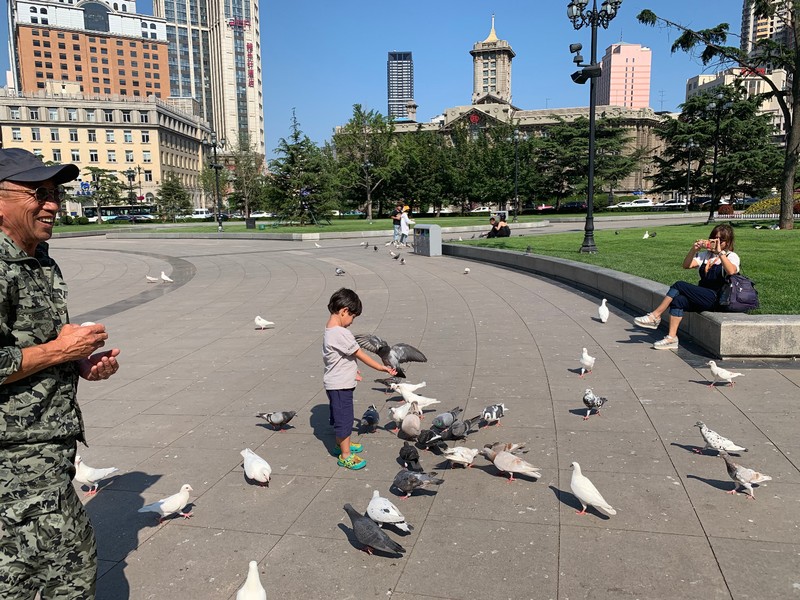 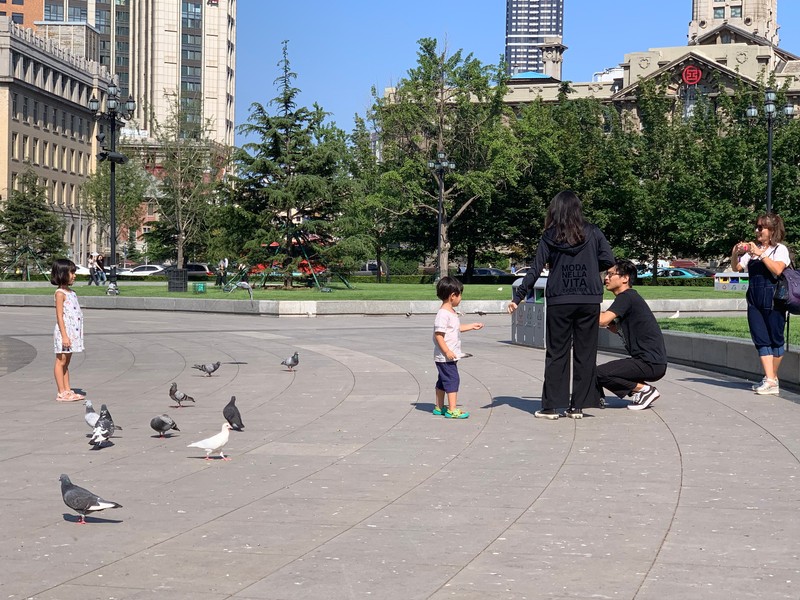 We were still far from finished with the magic of Dalian. Little Venice is the popular name for a development that is officially known as Montage de L'Eau, on the northern shore of Dalian facing Dalian Bay. Little Venice seeks to provide the experience of Venice including copies of some of its most famous buildings as well as canals and gondolas. Foreigners often disparage the Chinese penchant for copying or mimicking Western monuments and landmarks, but I think it is an area where East and West simply fail to see eye to eye. The Chinese don't feel they have taken something away from its originators by copying it, but rather they perceive it more as a tribute. Imitation is the sincerest form of flattery, if you will. As far as I'm concerned it's just something interesting to experience and I don't feel any need to make judgments about it. Montage de L'Eau was completed just a few years ago and is fairly unknown outside of Dalian. The bus dropped us off fairly close to the entrance where we were greeted with the familiar site of vast, shiny skyscrapers that were in the final stages of construction. 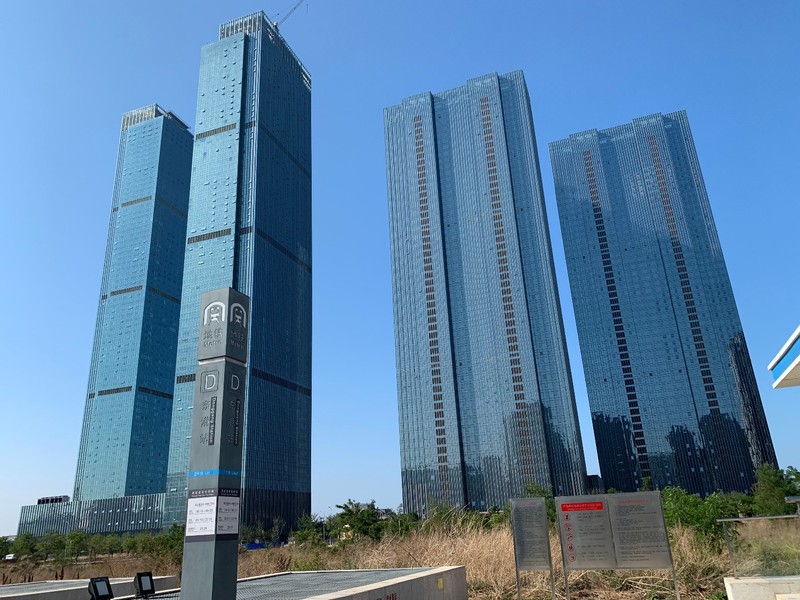 If it hadn't been for the gondoliers and the knockoff of the bell tower for St. Mark's Basilica, I wouldn't have known that Dalian was going for a Venice impression at all. The feeling was more like any number of modern cities with canals or downtown rivers, like San Antonio or Chicago. Many of the buildings had a neo-Classical appearance but didn't look particularly Venetian, and they were set back from the canals rather than bathing in them. It was a very beautiful place on its own merits and we enjoyed crossing the bridges and exploring the canalside pathways. 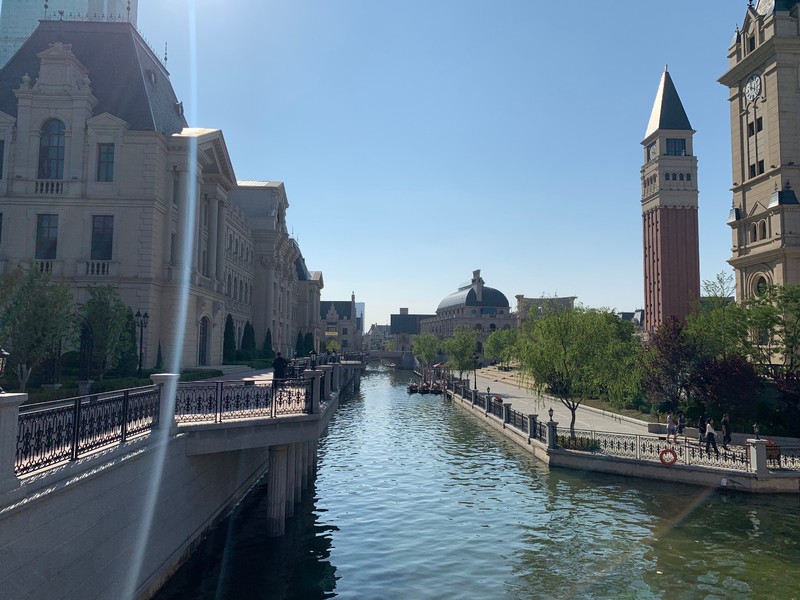 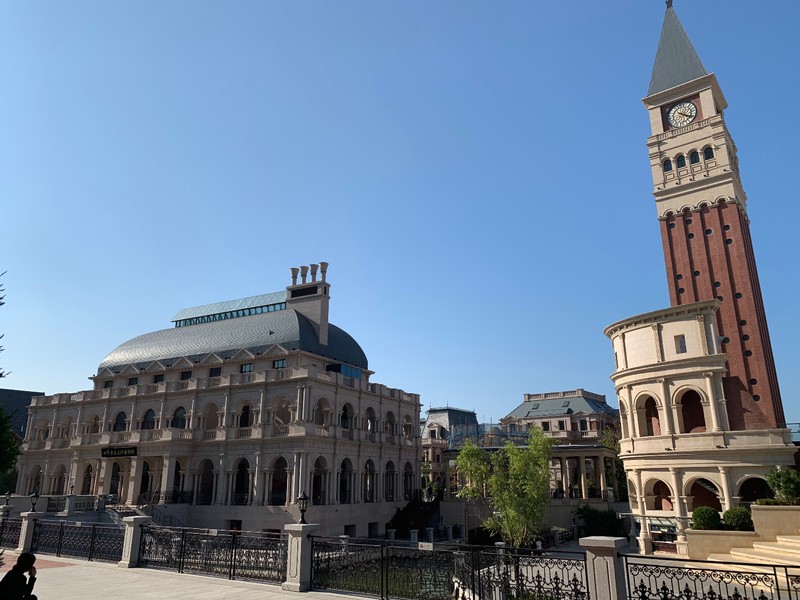 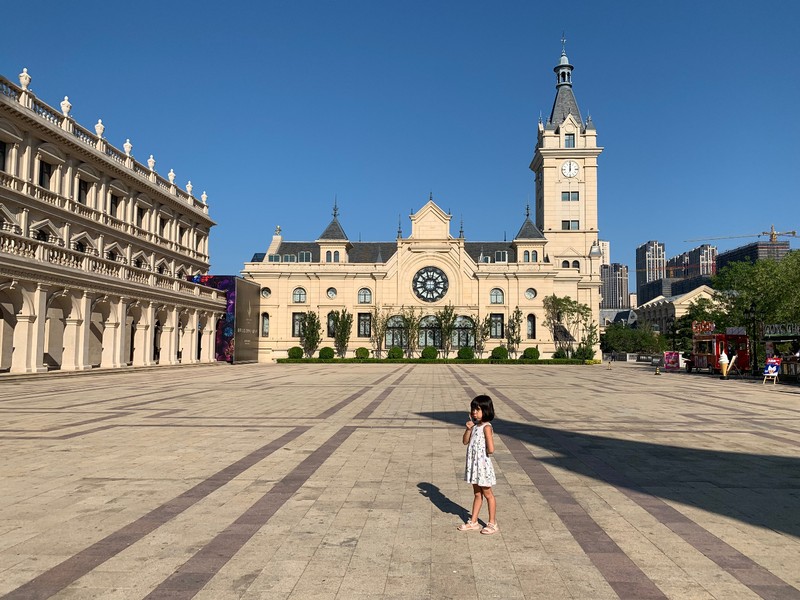 Of course gondola rides were on offer, and at a substantial discount to the ones available in the original Venice. The kids enjoyed being on the boat but the water was too still and the surroundings too tranquil for the ride to add much to the experience for me. Little Venice was a enchanting place in its own right but was in no way comparable to the breathtaking original. 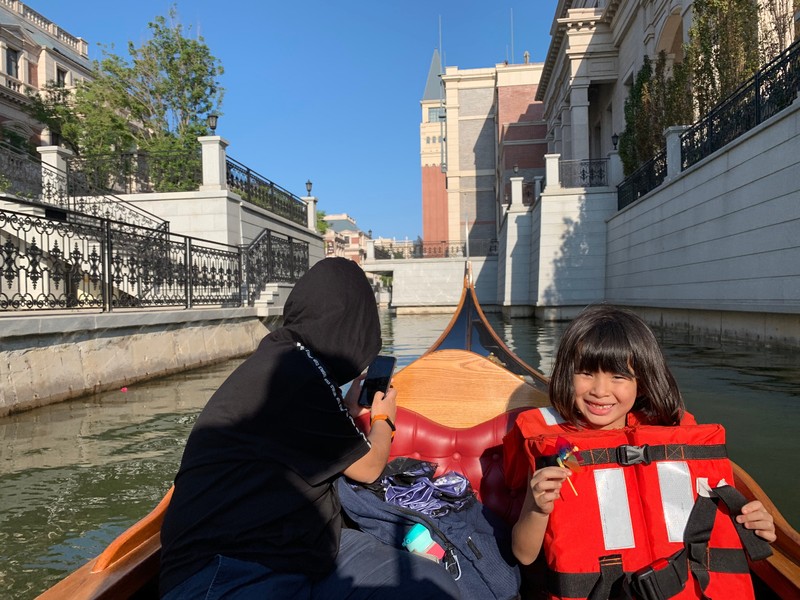 It tuned out there was much more to the area we were in than Little Venice. We exited on the opposite side and found ourselves on a wide, landscaped promenade that coursed along Dalian Bay. Little Venice posed gaily behind us in the shadow of the new skyscrapers we had seen earlier. 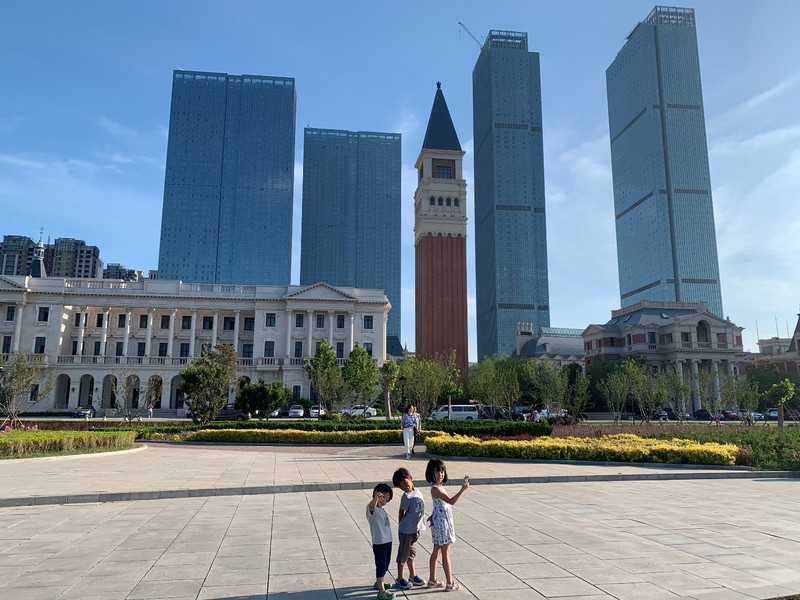 We walked west along the busy promenade until we reached the end of Montage de L'Eau, where there were several other interesting buildings including an apparent replica of the Arc de Triomphe. We kept walking past the port until we reached Dalian's strange clam-like convention center. 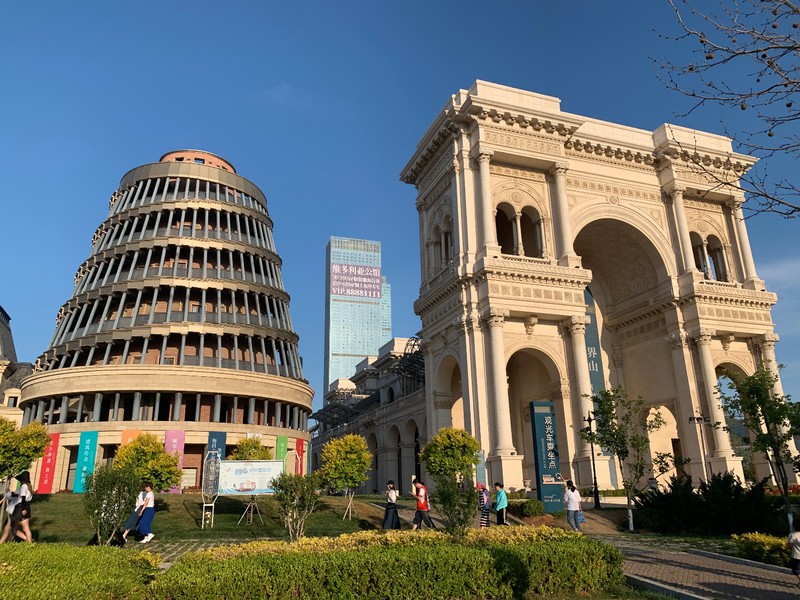 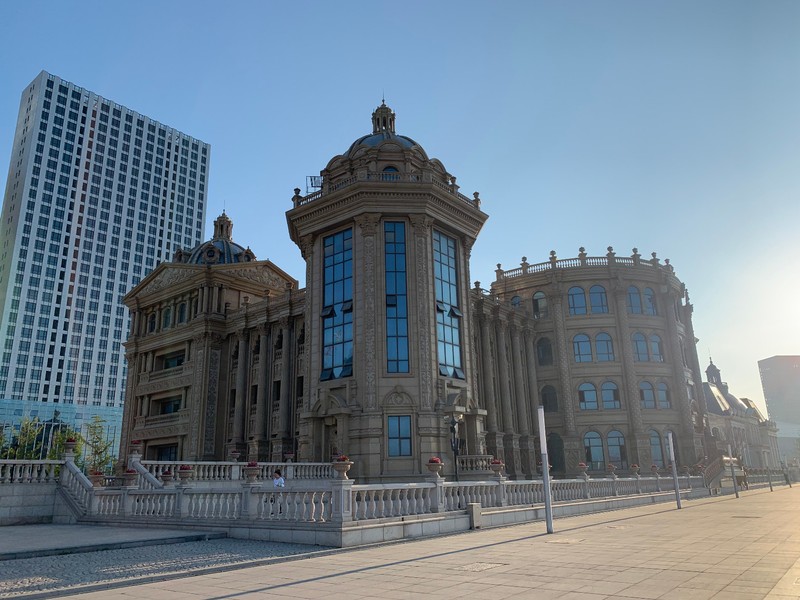 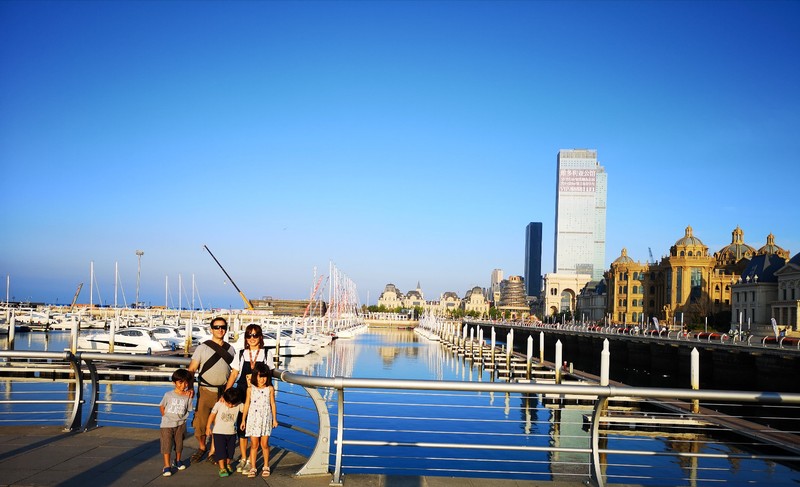 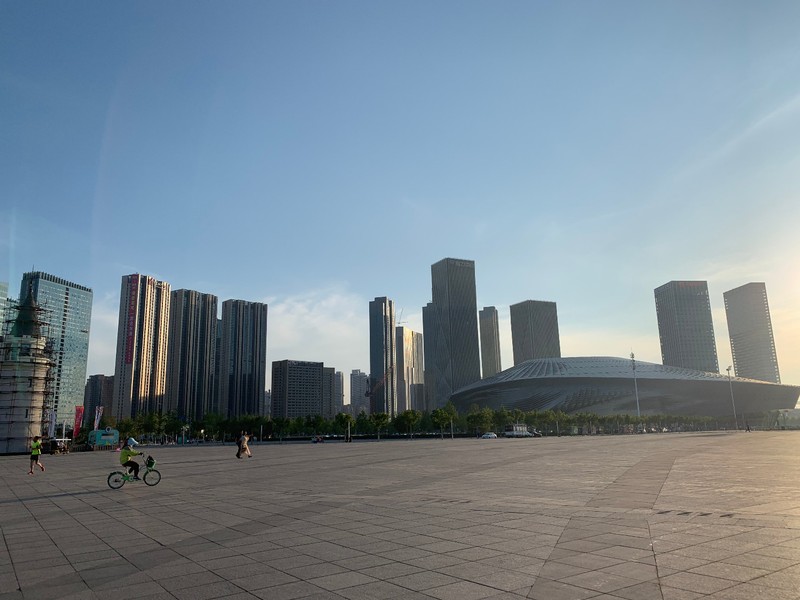 By now dusk was falling and it was time to head to our third night market in Dalian, back near Xinghai Square. It was pleasant enough but didn't have same energy as the other two we'd visited. Another exciting and magical day in Dalian had come to an end. 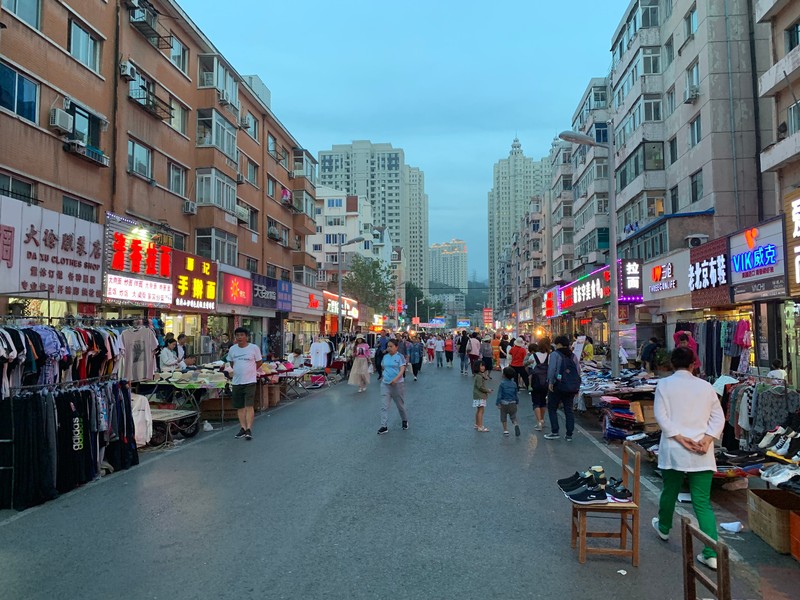 Posted by zzlangerhans 13:01 Archived in China

Your children are so fortunate to have these opportunities. There is a similar tower in Barcelona like the one in Little Venice. Makes me wonder how many of these there are.

You're probably thinking of the Venetian Towers at Plaza de España. They were built in the 1920's and are also copies of the Campanile of St. Mark's. The Chinese aren't the only ones who appreciate a good imitation, it seems.