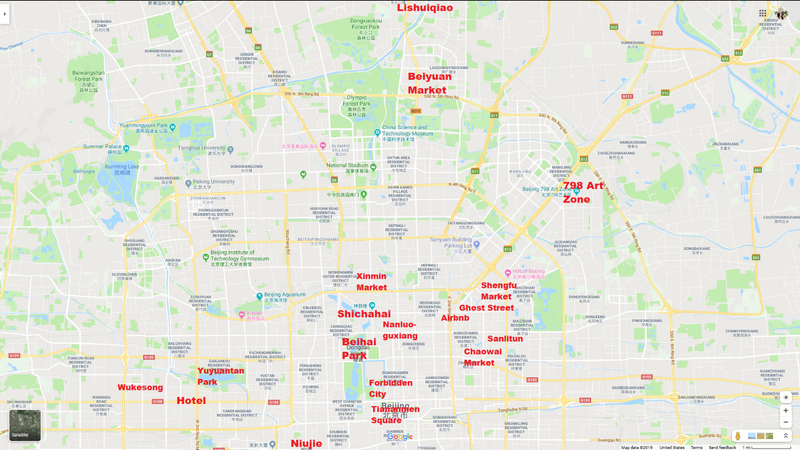 On Saturday morning we visited the tiny market in front of our apartment building. In China things get going pretty early, so it was remarkable that the last two mornings we had left the house before the market opened. Despite the small size we were able to put together a good breakfast of bread, bananas, tomatoes, and cucumbers. It was also my first time since we arrived that I saw our lovely apartment building by the light of day. 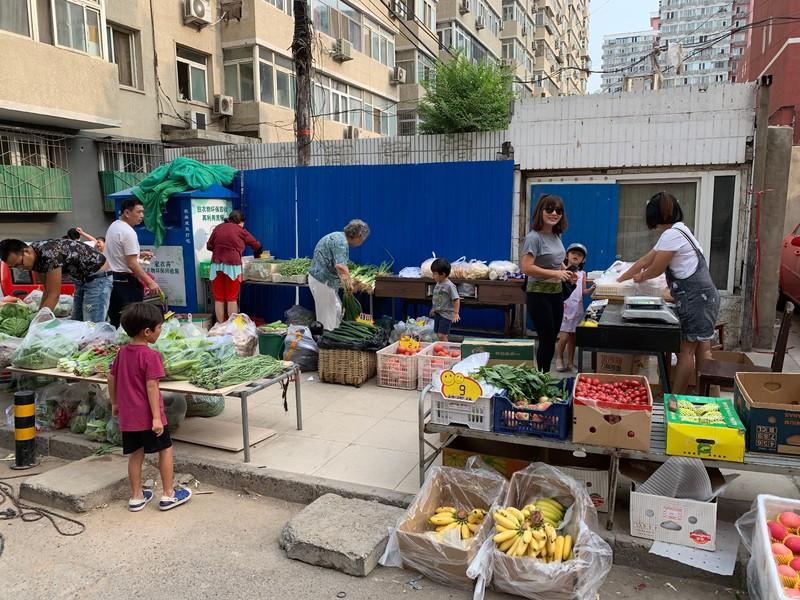 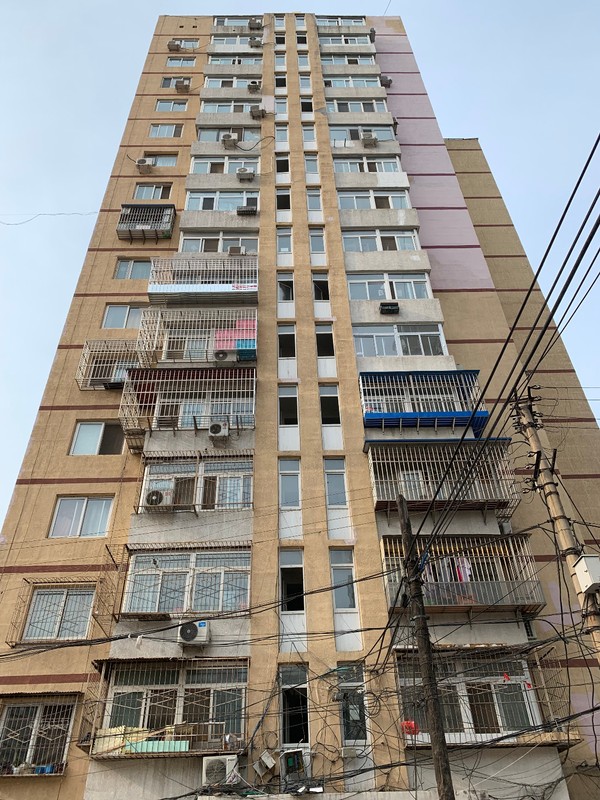 We had two more markets to see that morning, both in the far north of Beijing outside of the fifth ring road. This is the outermost of the four concentric main roads that surround the center of Beijing (the original first ring road has been consumed by redevelopment). Although we weren't staying in a touristy area, here we might as well have been in China a century ago in terms of how many Westerners were present. Even so far from the center it was amazing how many enormous complexes of towering apartment buildings were present. I calculated that each building could hold close to a thousand people, and they often appeared in groups of ten or more. It seemed I could see enough housing for a hundred thousand people just from where I was standing, and I wondered how Beijing could be populated by only ten million people if the outskirts of the city were this densely populated. 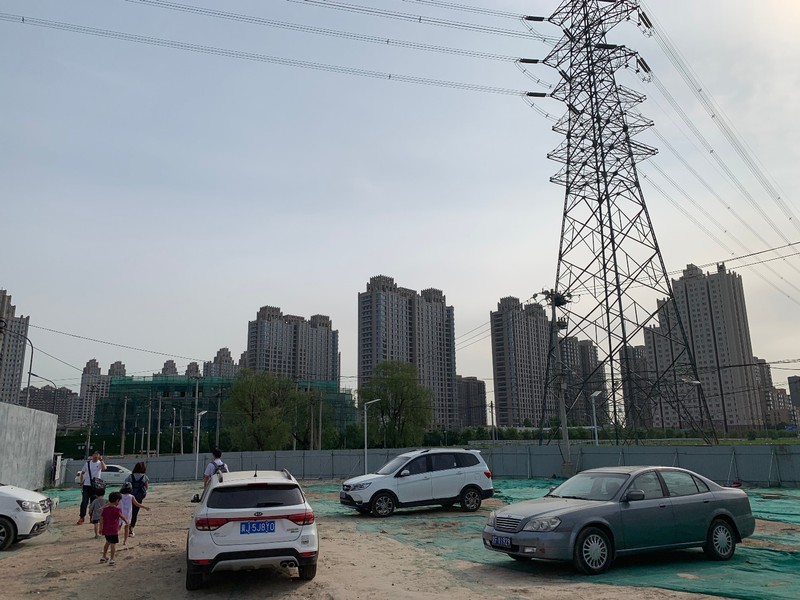 The Beiyuan market wasn't particularly remarkable, given that it was already the fifth market we had visited in Beijing. Even so, the sights and sounds and smells of a produce market are a great way to begin a day of travel. We also got to watch the process of making green onion pancakes at a popular food stall in the market. 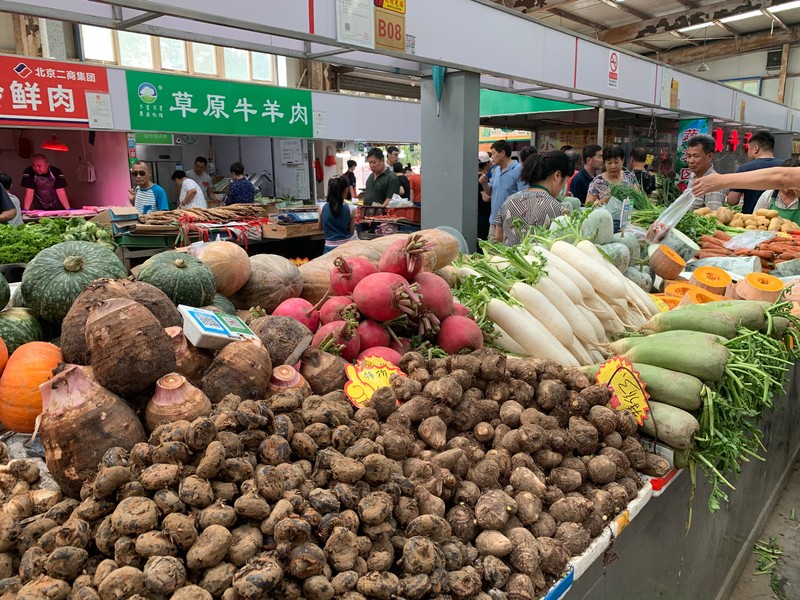 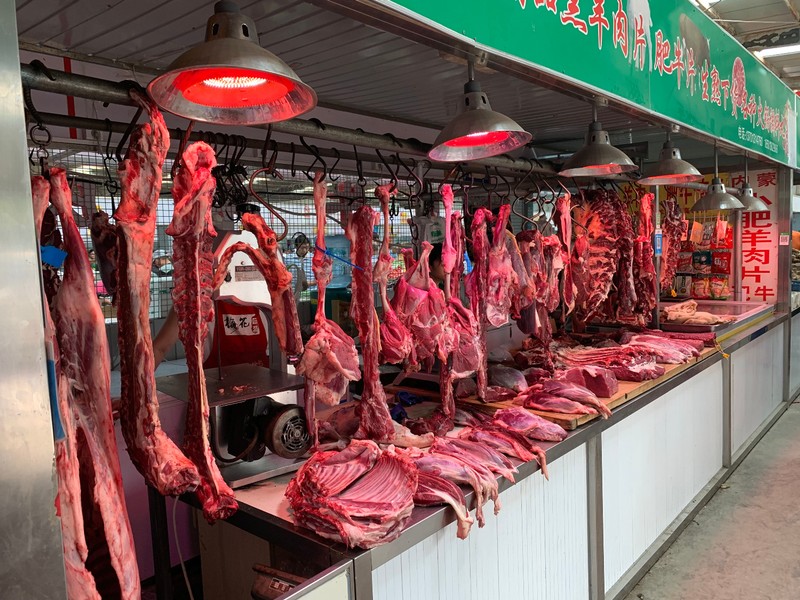 Taxis were hard to come by at Beiyuan market but we did come across a lady with a three-wheeled vehicle. Our next destination wasn't terribly far away so all five of us squeezed in and held on for dear life as the rickety transport careened through the busy avenues. The driver abruptly stopped well short of our destination, claiming she wasn't allowed to cross the bridge ahead. Mei Ling argued and docked the fare, but we had no choice but to cross the Lishui Bridge over the Qinghe River on foot. I put Spenser on my back for the long walk to Lishuiqiao seafood market, but the older kids weren't too happy about the trek.

Fortunately the seafood market was a good experience, thanks to a restaurant right next to the tanks that specialized in cooking their customers' fresh purchases. One of our favorite things about China is that in the markets we aren't limited to looking at the food and thinking how great it would taste on the plate. Most of the time we can buy what interests us the most and find someone to cook it for us. We bought clams and crabs and had our best meal in China up to that point. 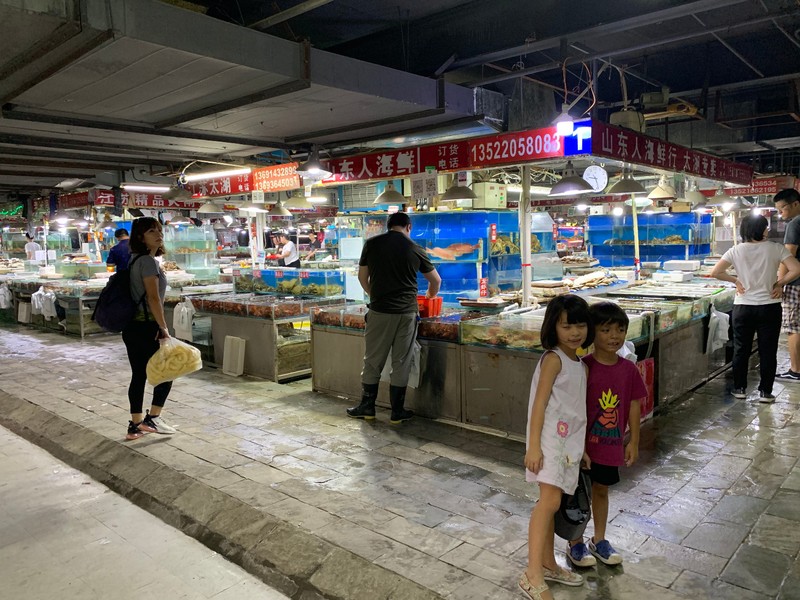 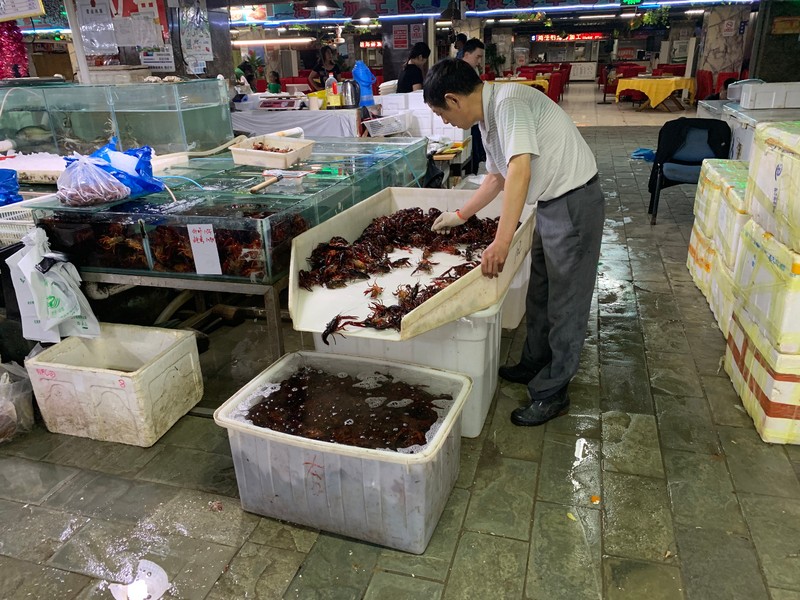 In the afternoon we met up with Cleo's online music teacher near our Airbnb. Cleo has been taking lessons for several months on Skype with an instructor who lives in Beijing, and she was very excited to meet him in person. Our destination was Ghost Street, one of Beijing's most famous food streets which was just a five minute walk from our Airbnb. Despite the spooky name, there's nothing scary about Ghost Street unless the sight of enormous piles of crawfish fills you with trepidation. Many of the restaurants are open 24 hours and display a festive mix of neon and traditional Chinese ornamentation. 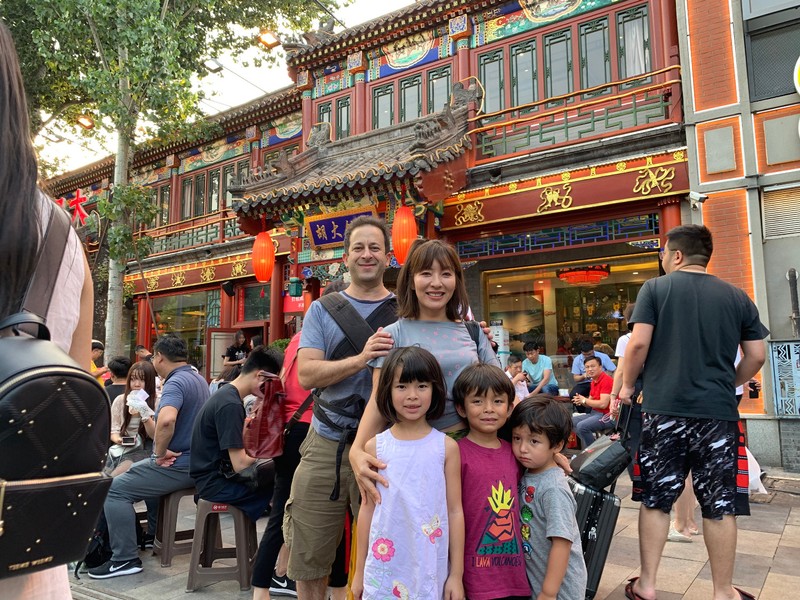 From Ghost Street we took a detour down an interesting alley and found ourselves in an area of peaceful hutongs and siheyuan walled courtyards. This style of housing was typical of Chinese cities for thousands of years but has been in drastic decline since the Communist revolution in the mid 20th century. Only recently has the government taken an interest in preserving the remaining courtyards. We were fortunate to stumble across one with open doors and were greeted cordially by one of the residents, who turned out to be the owner of the courtyard. The owner told Mei Ling the value of the property was a billion yuan, or about 140 million US dollars. I had some trouble believing that this pleasant but fairly plain courtyard on the ground level close to a busy commercial area could command a higher price than the most desirable New York City skyscraper penthouses, but Mei Ling insisted that the real estate market in Beijing had indeed ascended to such lofty levels. 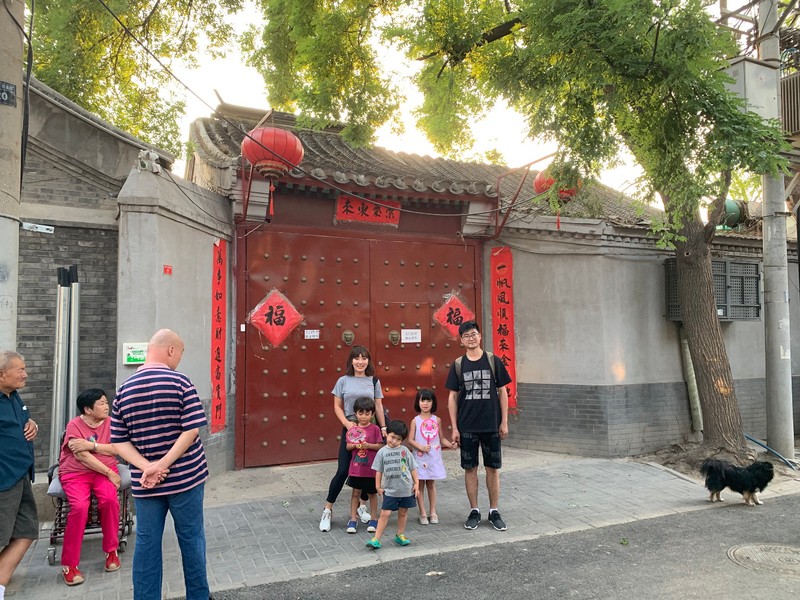 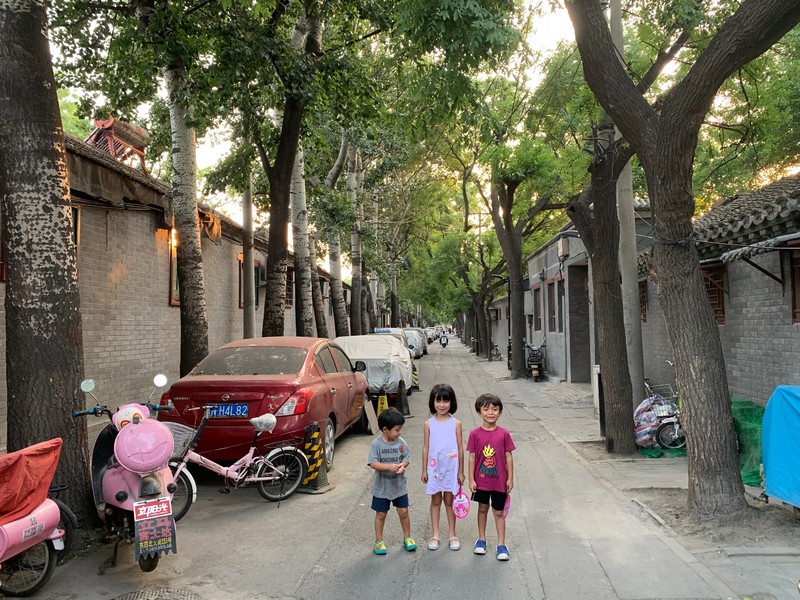 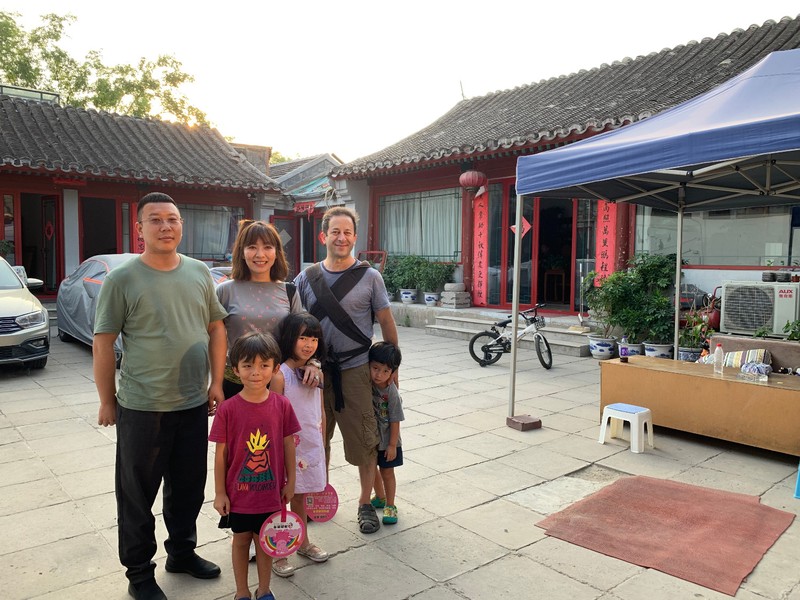 Dinner was most memorable for some of the interesting translations on the English version of the menu. I didn't have the courage to try either of these dishes. 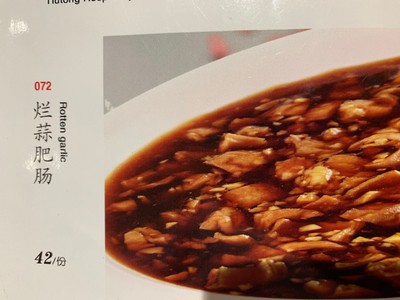 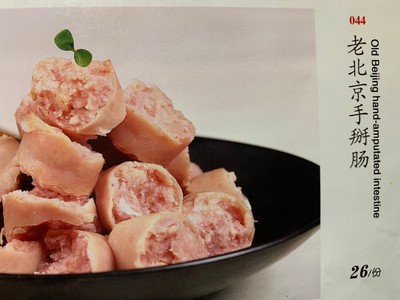 Afterwards we took the metro to another food street called Niujie, which proved to be a disappointment. Once again this was just a street with several restaurants, rather than actual street food. Many of the restaurants were closed, and a local advised us that this was more of a day time experience. Niujie is known for Uighur Muslim specialties, which usually means lamb skewers. Indeed, the large restaurant we eventually ate at offered a proliferation of skewers. I'm not particularly a fan of the lamb used to make these, which generally consists of tiny scraps of fatty and gristly meat. Furthermore, skewers have become so popular around Beijing that it's easy to find them anywhere so the long trek to Niujie had largely been a waste of time.

On the last morning of our first stay in Beijing we met up with another of Mei Ling's friends at a mall in the eastern suburb of Tong Zhou. It was a fairly typical mall except for the workers making sweet cakes inside a Plexiglas enclosure. We let the kids entertain themselves in the play zone while we explored the mall. Afterwards we had lunch at a restaurant where the kids could pull their own noodles from strips of dough and cook them in the hot pot. 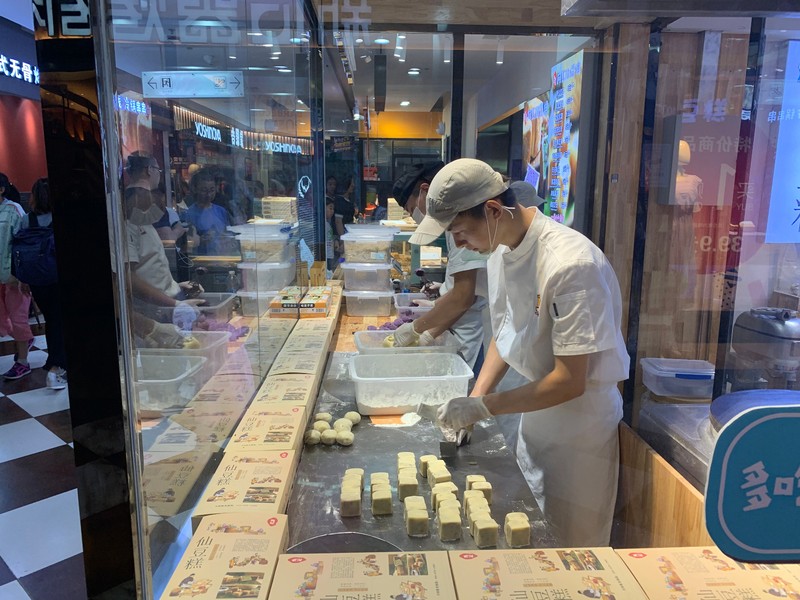 After a few hours more of letting our kids and Mei Ling's friend's kids play together at her apartment, we took a long metro ride back to the center of Beijing. The kids hadn't slept and both Spenser and Ian conked out on the first train. I was able to carry Spenser in the mei tai but Mei Ling had to carry Ian in her arms through two metro changes which was very painful. At least it was the final aftereffect of the jetlag that we had to deal with on the trip. We eventually surfaced in central Beijing adjacent to Beihai Park, one of the places I had enjoyed most in my previous visit to Beijing. Unfortunately once we arrived the sun was setting rapidly and it was clear we weren't going to be able to enjoy the park. The lakes north of Beihai Park and the surrounding neighborhoods are known as Shichahai, an area filled with restaurants and nightlife. We walked along the west side of Qianhai Lake, looking for a restaurant with an appetizing menu and a view of the lake. We didn't find what we were looking for by the water, but the brightly lit restaurants and their lakeside reflections were beautiful. We came across a street vendor who was making candy animals out of blown sugar and he let the kids help construct their own purchases. 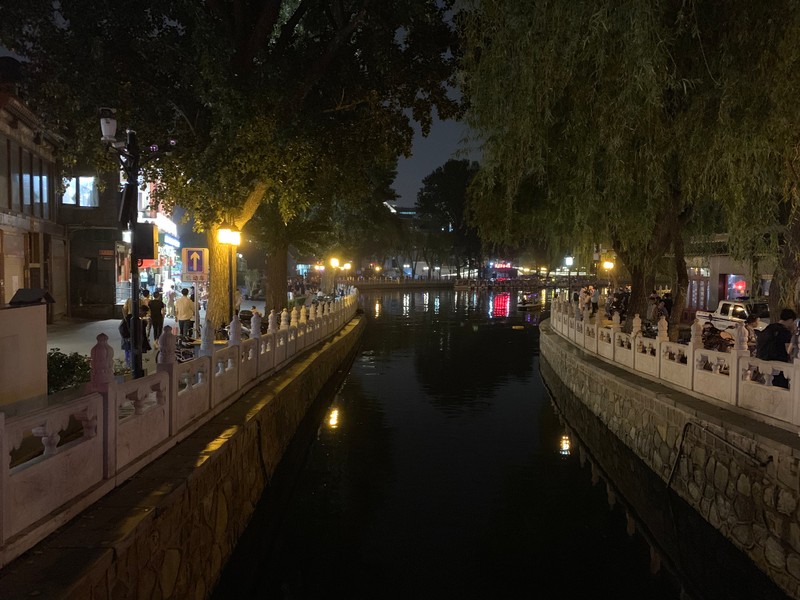 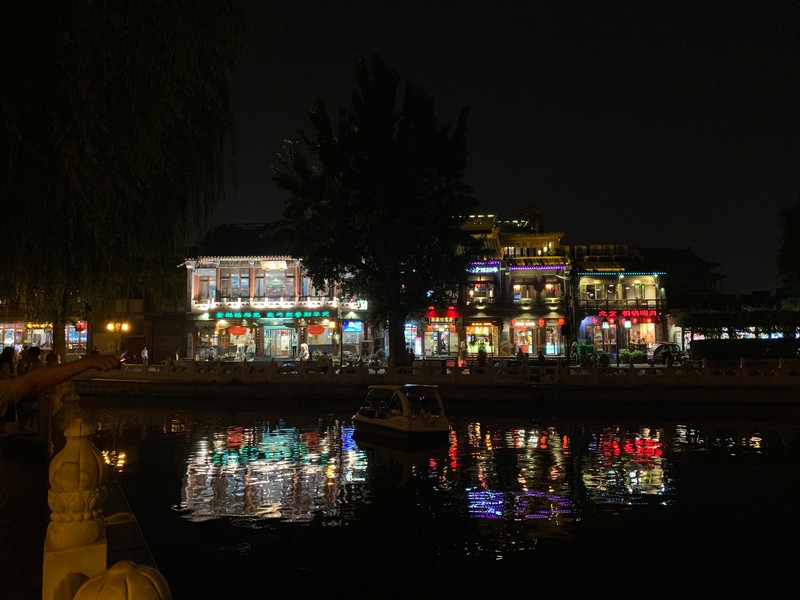 We walked as far as the bridge that crosses the narrow strait where Qianhai Lake joins Houhai Lake. On the eastern bank of the lake we finally found a place to eat and then loaded our exhausted family into a taxi for our last night in Dongzhimen. In the morning we caught the Airport Express from Dongzhimen which took us right to our departure terminal. We got a great spot in the front with a view of the track ahead. It was almost like riding through a forest except for the high-rises behind the trees. Our departure from Beijing was uneventful except for the unfortunate restroom signage at our gate. 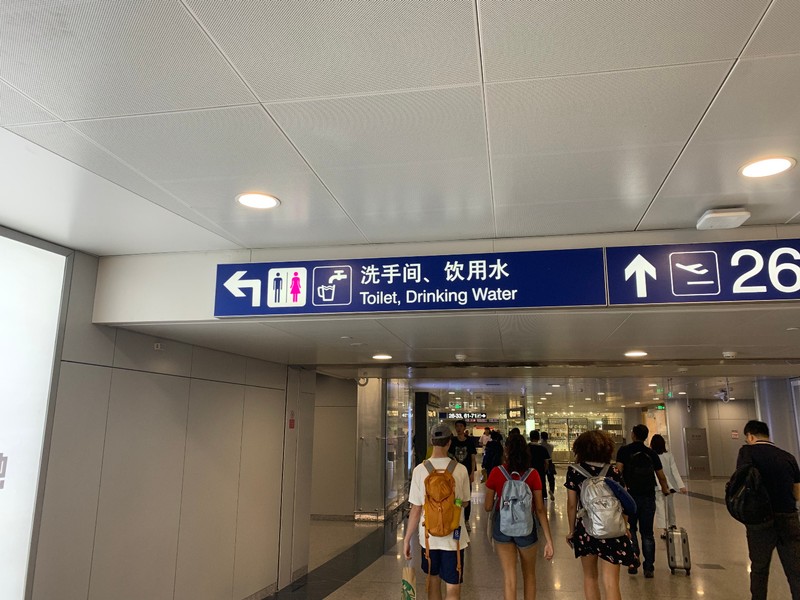