When we left the last two weeks of our itinerary empty, we had no intention of visiting Shanghai despite the fact that my brother lives there with his two sons. I had been to Shanghai three times before and although it’s one of my favorite cities I was intent on covering new ground. Our hope was that my brother would find time to meet us in one of the other cities we were visiting, but unfortunately he wasn’t able to get the time off work so we flew from Osaka to Shanghai instead of back to Beijing.

Michael has been living in Shanghai for twenty years. He’s divorced and currently lives in a three story townhouse well to the west of central Shanghai with his sons, his girlfriend, a nanny, and an ayi. Although the location wasn’t convenient, we stayed with him to maximize the amount of time our kids could spend with their cousins. The townhouse was in a large complex of neoclassical buildings that could have been quite beautiful if they weren't so grimy and dilapidated. The three rooms on each level were arranged around a central winding staircase whose banister railings were far enough apart that any of our kids could have fallen through them easily. I spent most of our waking hours at the apartment making sure that the kids stayed in my nephews' bedroom to play rather than chasing each other up and down the stairs. 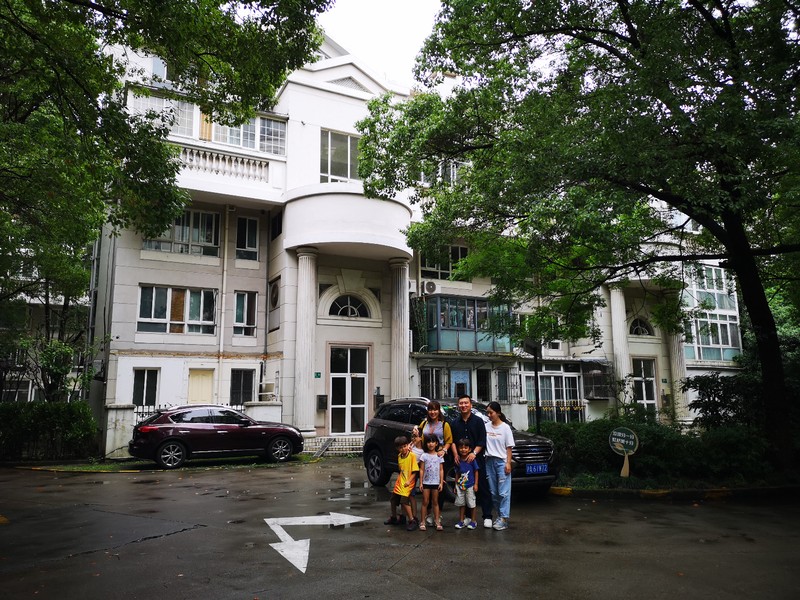 Being far from the center was an opportunity to see the modern, residential side of Shanghai. About half a mile away was a commercial area with enormous malls, restaurants, and supermarkets. For our first dinner in Shanghai we chose a supermarket where we could buy live seafood from tanks and have it cooked to order. Even though we had more adults around to keep things in check, it was still a daunting task to keep the critical mass of five ebullient kids from knocking over the displays. 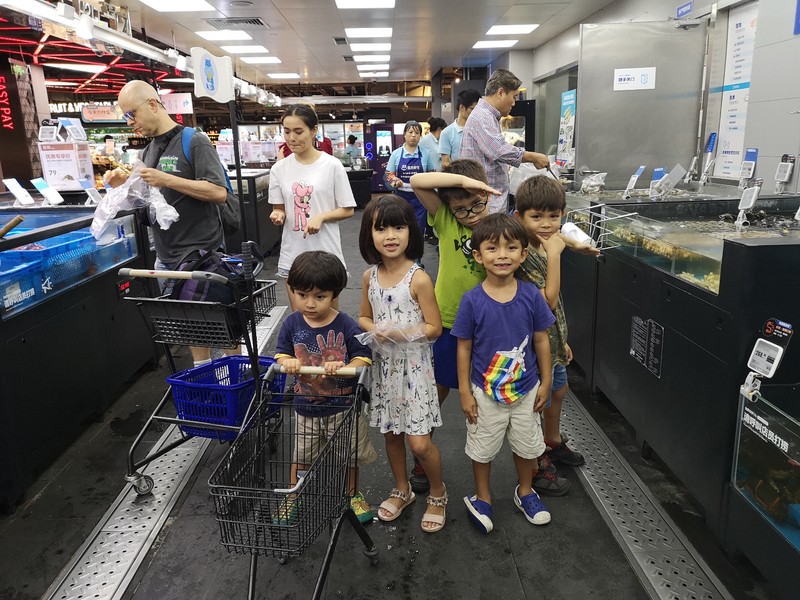 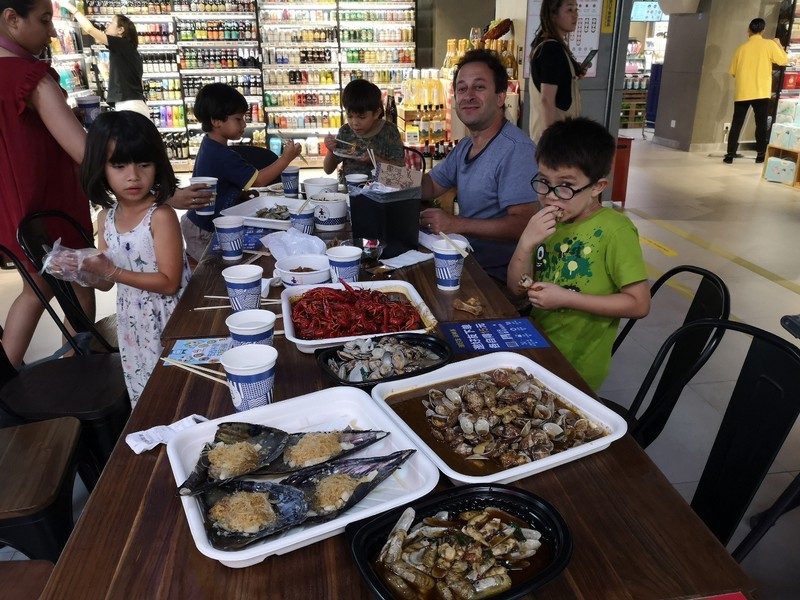 The next day we never made it out of the local area. Mei Ling's brother took a train up from Hangzhou with his fiancee and we spent most of the afternoon in the local mall. The big event was an appearance by a Hong Kong actor named Andy Lau, who I'd never heard of but is apparently one of the biggest stars of Chinese language movies ever. Every balcony of the multilevel mall was packed with people awaiting the actor's appearance, which finally took place about ninety minutes after it was scheduled and lasted about two minutes. None of us even caught a glimpse of him from where we were standing. Afterwards we took turns on the virtual reality rides which were thankfully a lot less expensive than they had been in Qingdao. 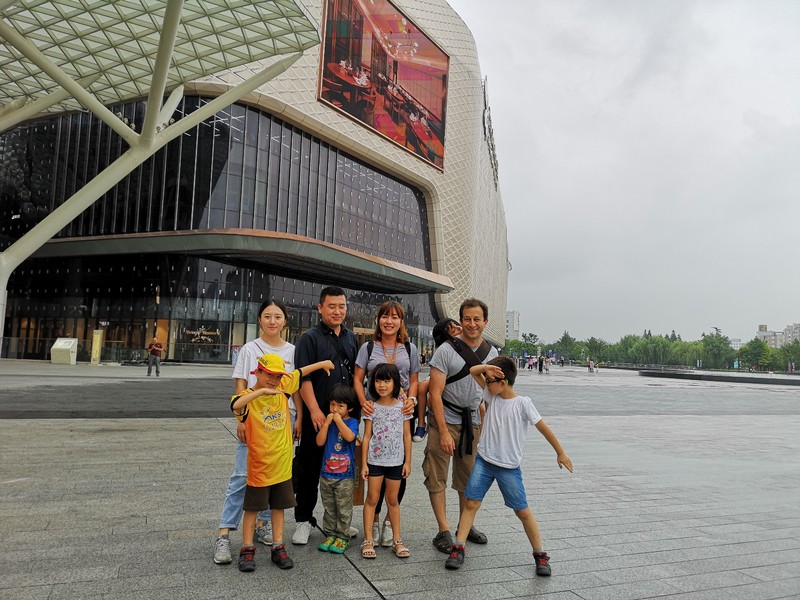 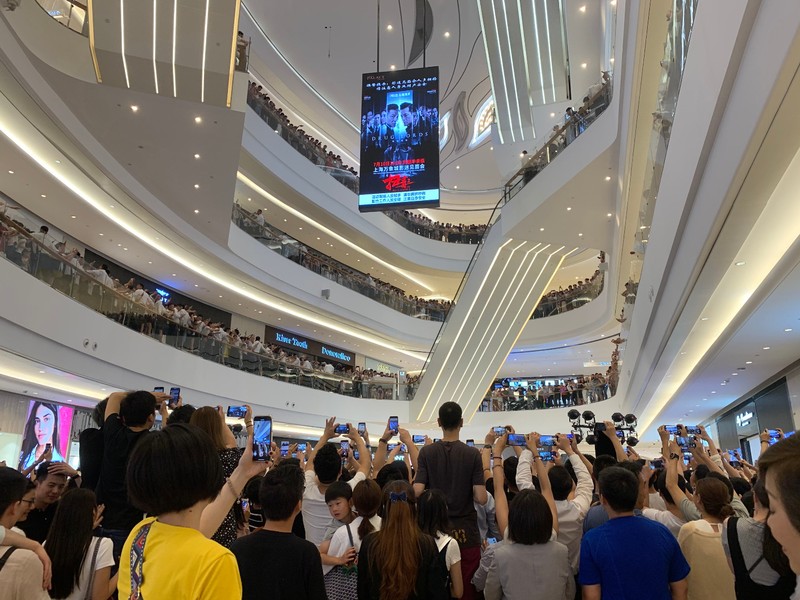 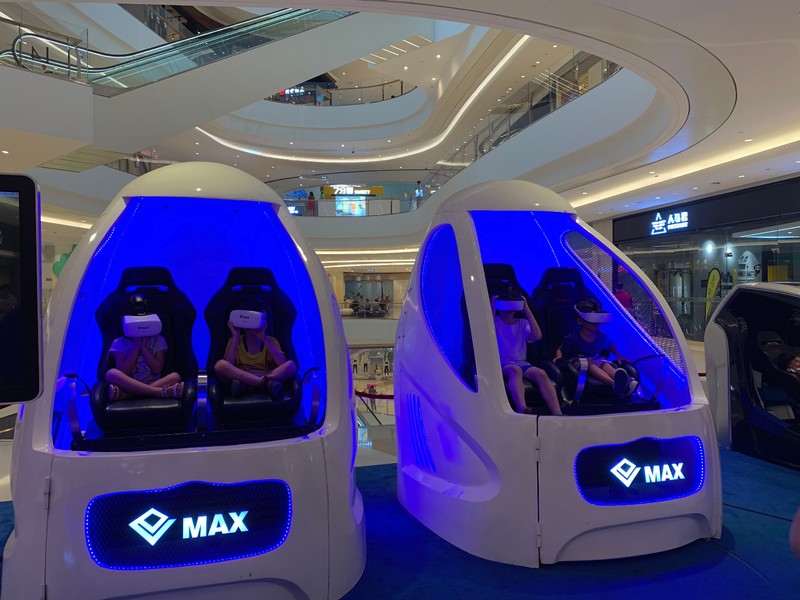 By the time we left the mall a torrential downpour was competing with the colorful hourly fountain show in the plaza. We hurried to a local restaurant where the food was cooked at the table with an enormous blowtorch that ignited the cooking oil into a mass of flames. Not a good place to be wearing hairspray. 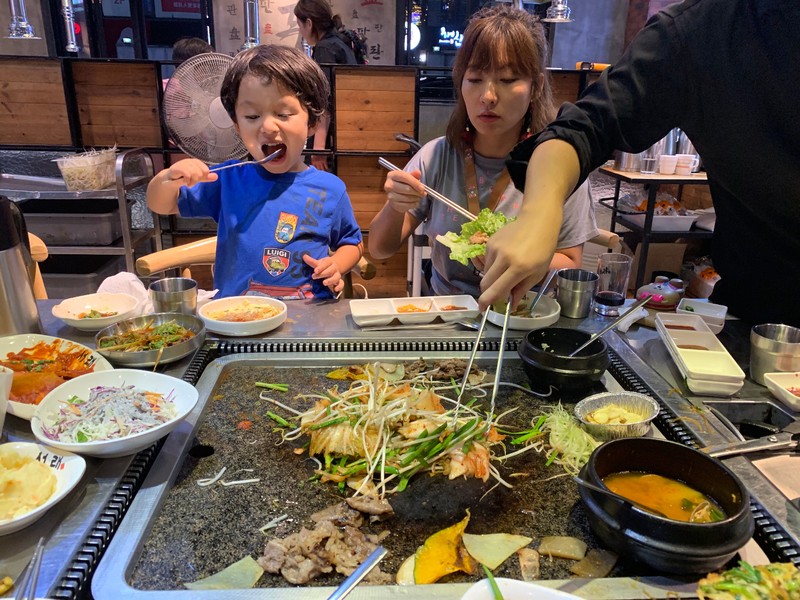 The next day we finally used Shanghai's world class metro. The Chinglish signs warning against jumping onto the tracks that I remembered from 2011 were gone. Now there were European-style barriers between the platform and the train, a welcome sight given that we had five kids to keep track of. We met up with one of Mei Ling's Chinese friends from Miami at the Shanghai Natural History Museum. I wasn't too enthusiastic about the choice because I'd just taken Ian and Cleo to the Museum of Natural History in Manhattan a year earlier and they hadn't clicked with it at all. Sure enough, the six kids seemed more interested in tussling with each other and scattering in every direction than they were in any of the exhibits. Before long the adults were all exhausted with corralling their offspring and we decided to search for a more interesting location. Before hitting the road we spent a few minutes appreciating the sculpture park in the plaza outside the museum. 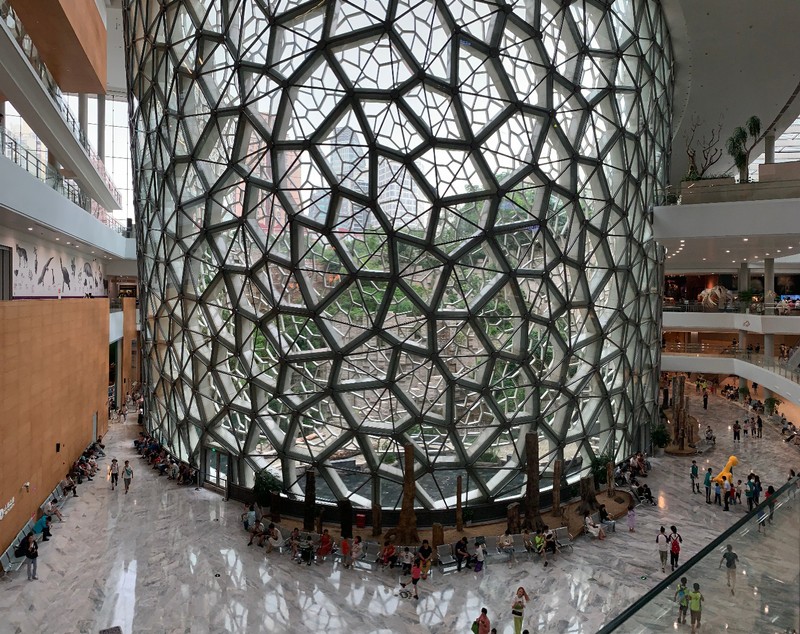 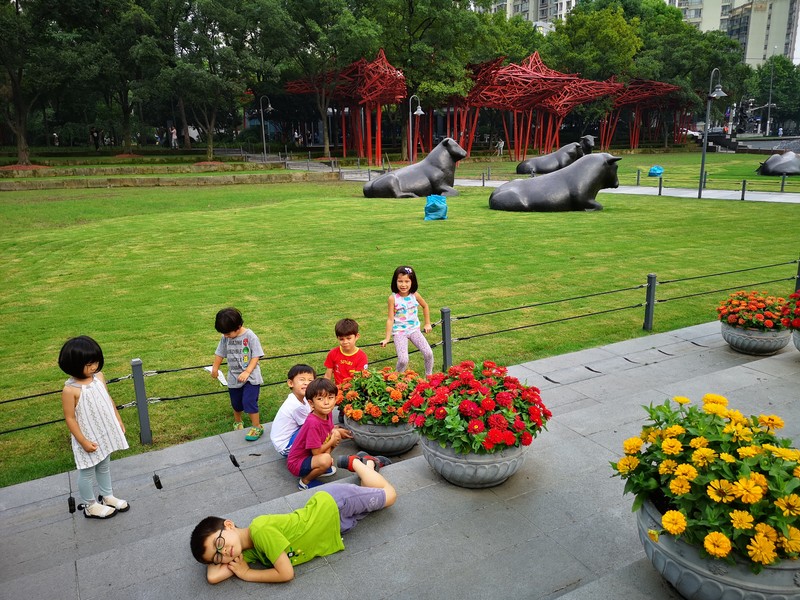 Most of what is interesting to travelers in Shanghai is concentrated in a relatively small area between the North-South Expressway and the Huangpu River. The museum was just outside that area so we had a long but not unpleasant walk to Nanjing Road, Shanghai's main pedestrian thoroughfare. Along the way Mei Ling's friend rented a city bike and the kids alternated riding on it as they grew tired of walking. Along the way we passed by People's Park and got a close-up look at Tomorrow Square, a futuristic skyscraper that looks like a rocket-propelled grenade. 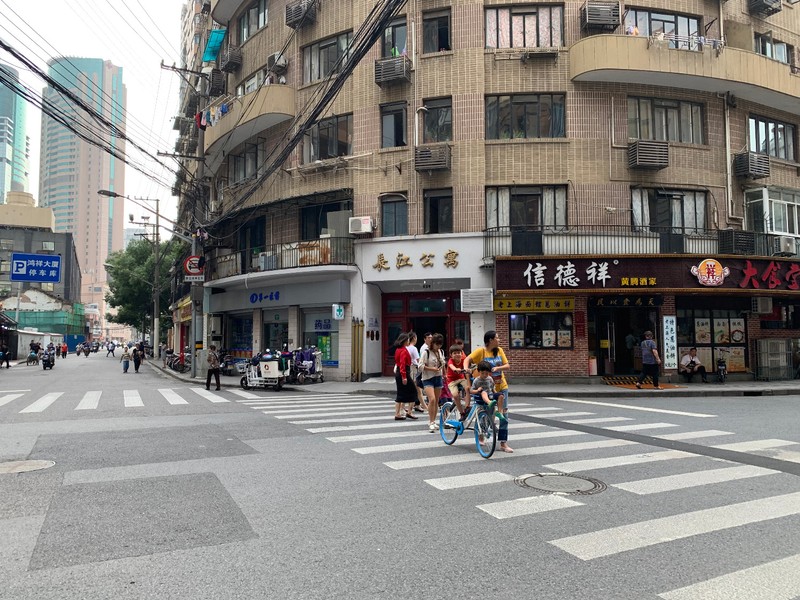 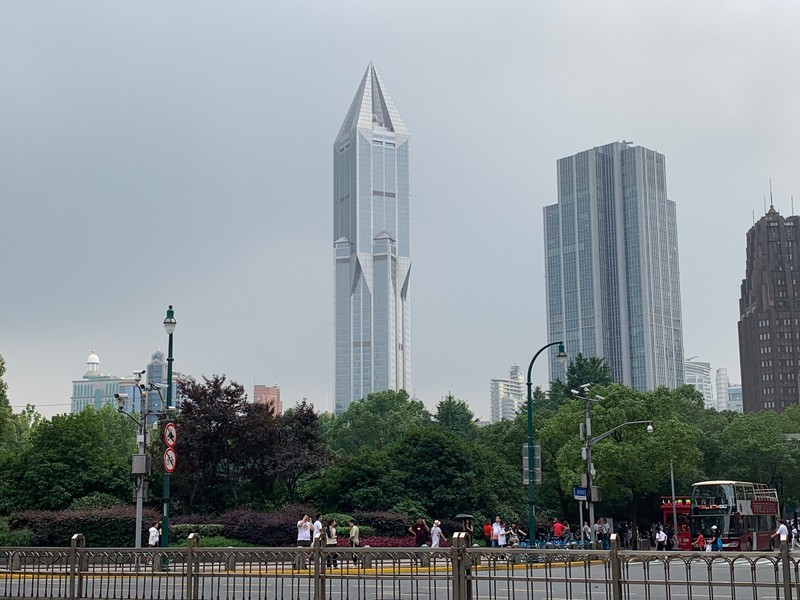 Nanjing Road was satisfyingly hectic and lined with a mix of classically elegant buildings and eclectic skyscapers, but it was decidedly more modern and Western-appearing than I remembered. Most of the sidewalk vendors that used to clog the area were gone with the exception of one small side street. We bought a cool little car from a kiosk where the demonstration model was driving straight up and down walls using suction, but once we got it back to the apartment it didn't even turn on. When we took it apart we found that it was missing the lithium battery. It was kind of hard to understand the point of selling a defective version of a toy that only cost twelve bucks, but my brother insisted that the battery was two thirds of the value of the entire car. 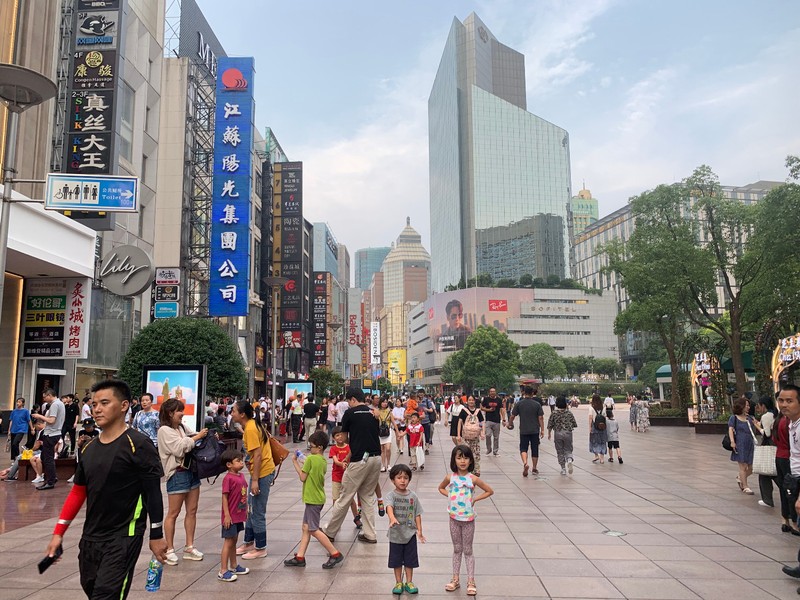 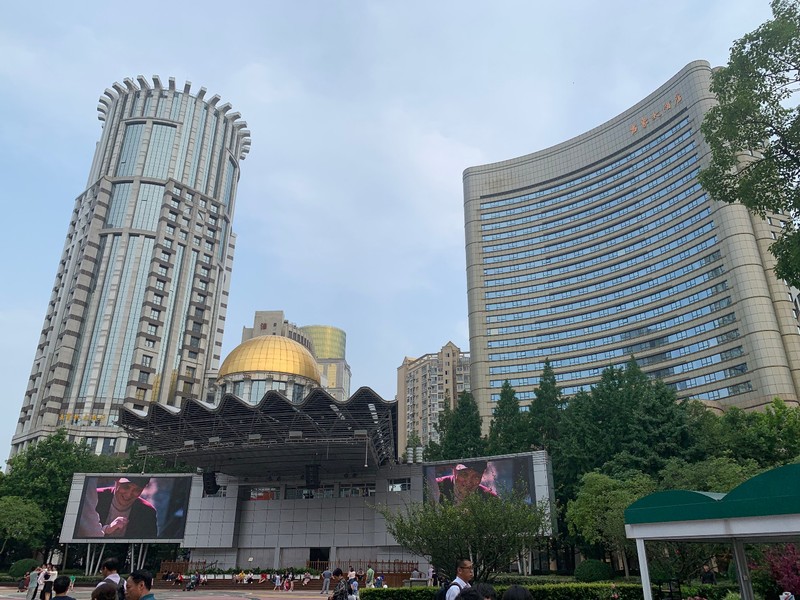 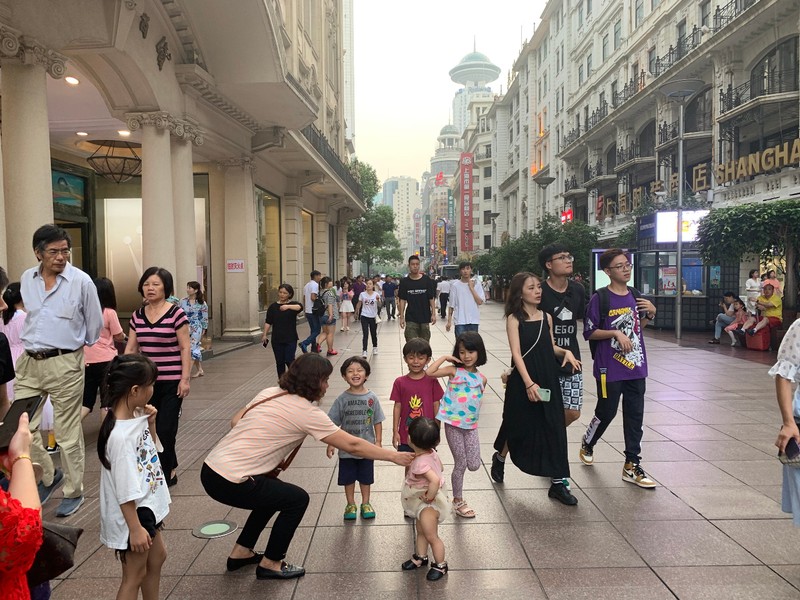 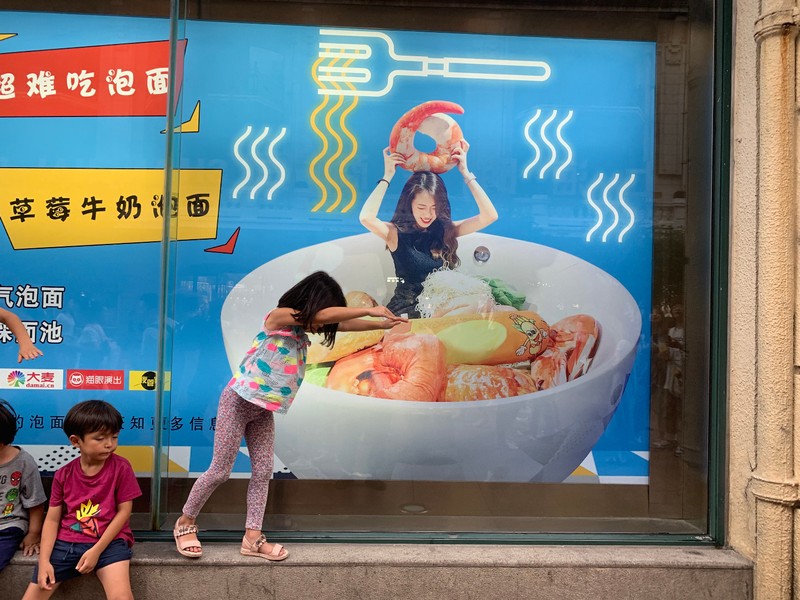 We continued moving east towards the river and soon encountered older neighborhoods that were riddled with narrow pedestrian alleys. We dived into these areas whenever we found them and found an excellent restaurant to squeeze into for an early dinner. 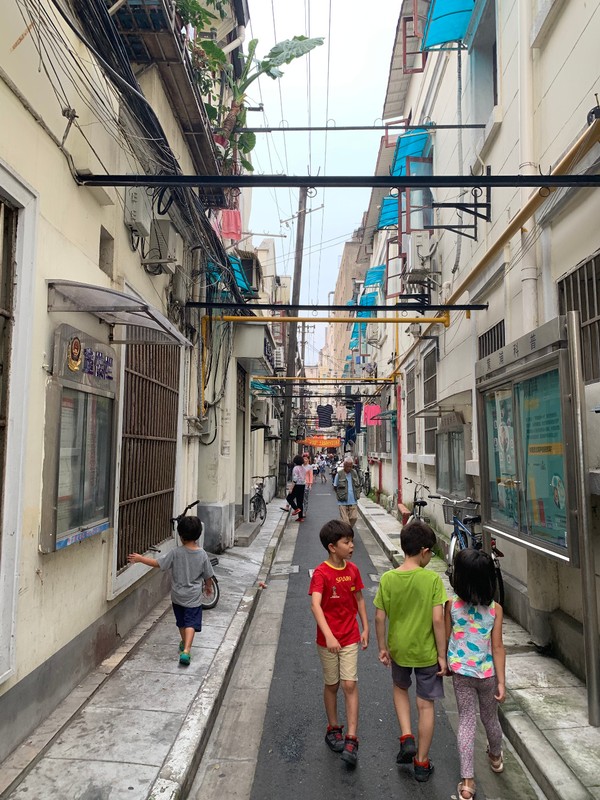 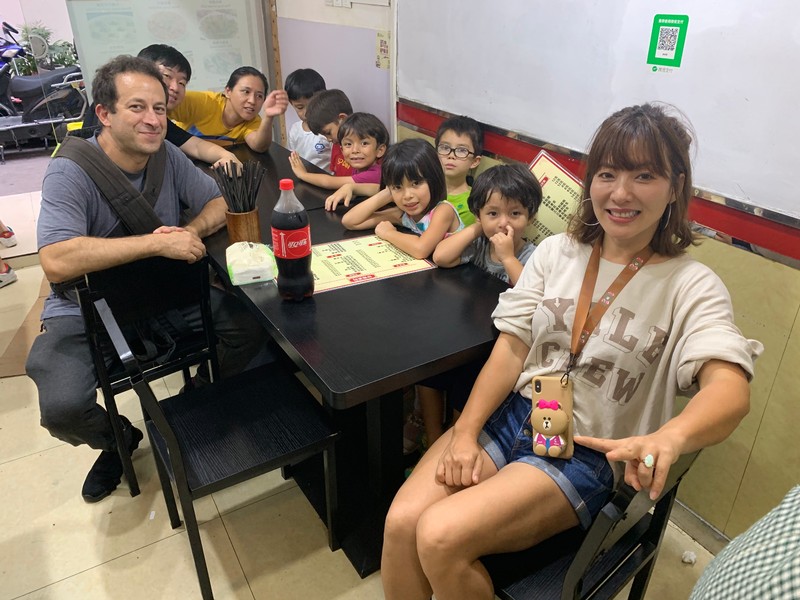 By the time we'd left the second restaurant of the evening darkness and fallen and we had reached The Bund, the historic western bank of the Huangpu that hosts the majestic remnants of Shanghai's colonial era. Although our experience thus far in Shanghai had been fairly sedate, here we found a huge mixed crowd of locals, Chinese tourists, and Westerners. Across the river was the brightly illuminated and futuristic skyline of Pudong, Shanghai's hypermodern expansion with huge international hotels and financial skyscrapers. We let the kids feed off the energetic atmosphere for a while and then returned to the metro for the long trip back home. 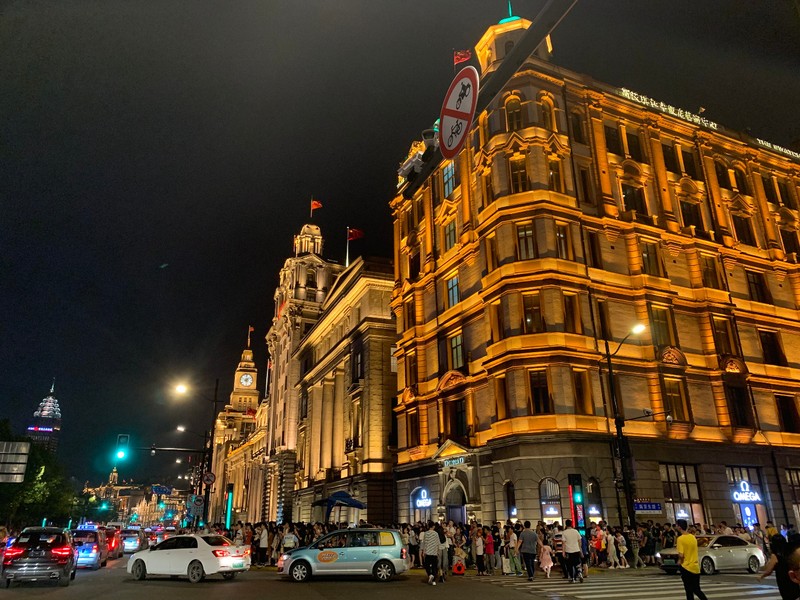 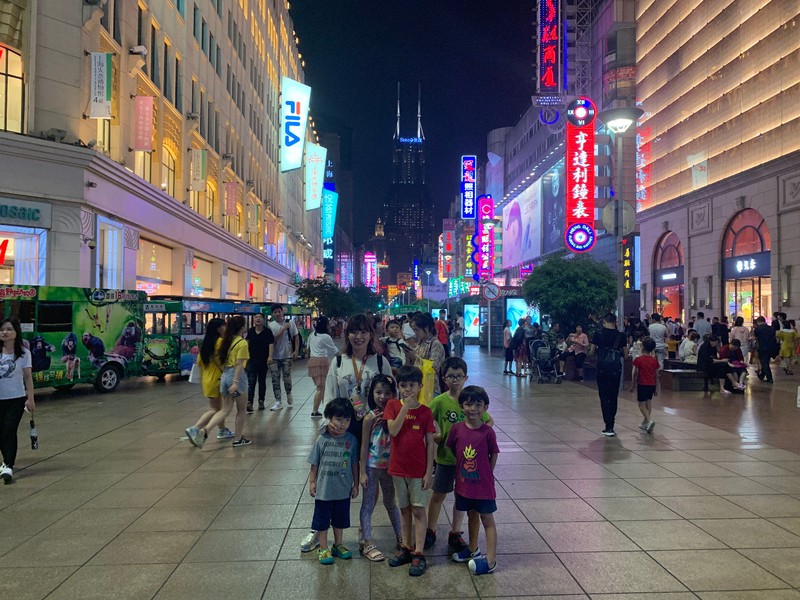 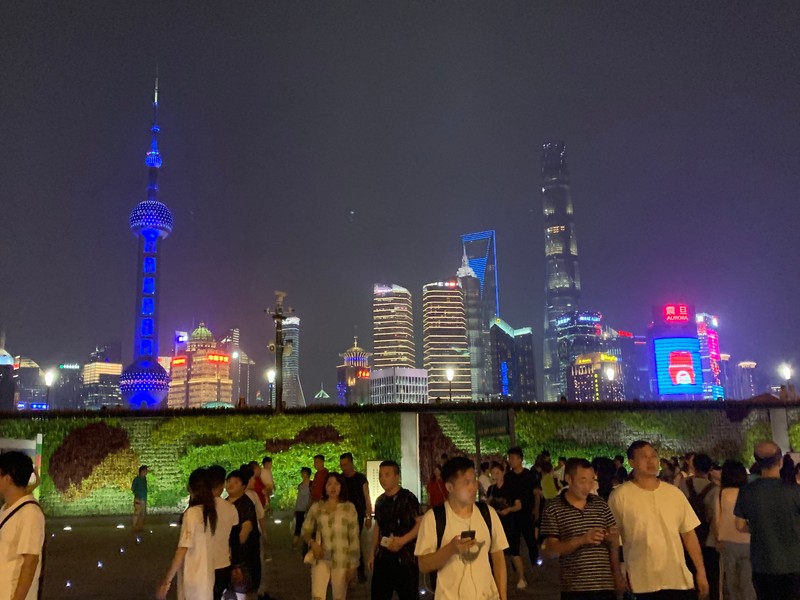 Friday morning we took the metro to a rather nondescript area in northwestern Shanghai for the weekly Muslim Market next to the Huxi Mosque. In the face of China's apparent homogeneity it is easy to forget that the country has a sizable Muslim minority. The most visible Muslim population is the Uighurs who have migrated from their home region of Xinjiang into practically every Chinese metropolis, often as providers of the highly coveted barbecued skewer street food. The Hui Muslims number more than the Uighurs but are less well-known because of the extent to which they have assimilated into mainstream Han Chinese culture. There are currently about 80000 Muslims living in Shanghai, but of course the market also serves many non-Muslim locals who enjoy Uighur food as well as Westerners. Aside from the omnipresent lamb skewers, there were enormous lamb shanks and mouthwatering deep fried chickens on display. 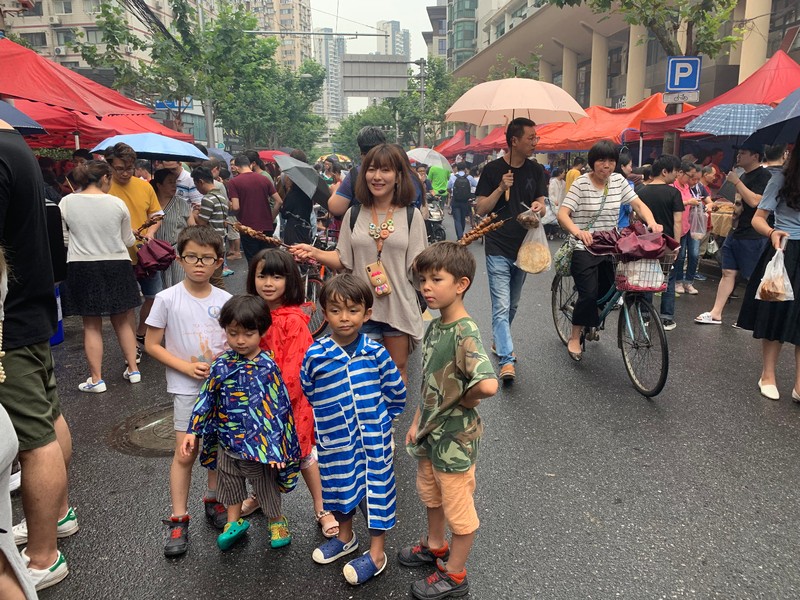 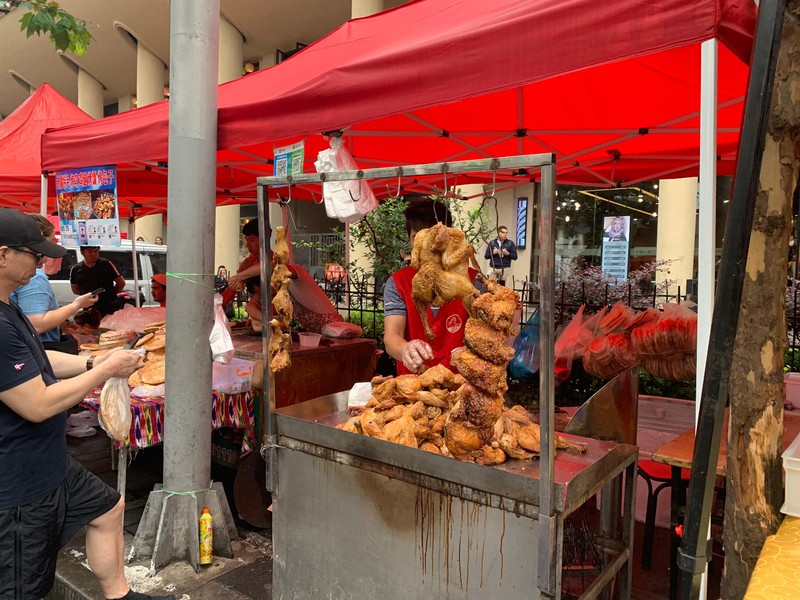 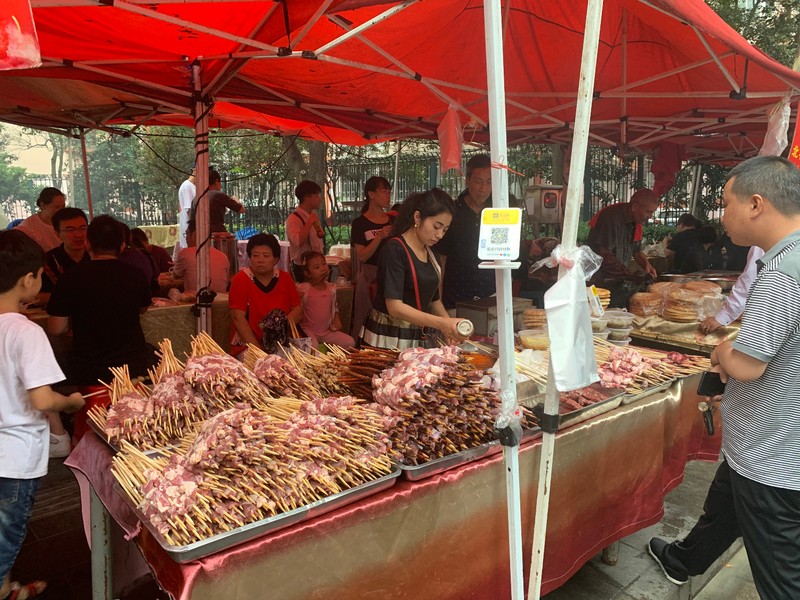 Ignoring the drizzle, we feasted on skewers that were better quality than the usual late night street food fare. I couldn't resist the temptation to buy a huge, meaty lamb haunch. I rounded up the kids and we took turns ripping hunks of meat from the leg with our teeth as other marketgoers looked on in amusement.

Stuffed to the brim with lamb, we were energized to press on to Yuyuan. On my last visit to Shanghai I was amazed how the huge koi in the pond at this historic garden aggressively piled on top of each other when they were being fed by visitors, sometimes until they were practically out of the water entirely. I thought to myself that I could even put food into their mouths directly with chopsticks. I got kind of obsessed with this idea and eventually resolved that on my next trip to Shanghai I would feed koi rice with chopsticks. It was still raining when we arrived at Yuyuan but the touristy bazaar around the garden was jam-packed. Despite the plethora of fast-food kiosks we couldn't find a single one that was selling steamed rice and eventually we had to settle for a loaf of crumbly bread.

The garden was also more crowded than I remembered from our last visit, probably because we were there at the peak of the summer tourist season. Despite the intermittent drizzle it was quite enjoyable to walk along the paths among the ponds and pagodas, admiring the artful rock walls and graceful trees. The bridge across the pond with all the koi was much narrower than I remembered, and as soon as the kids saw I was going to feed the fish they all rushed over and I couldn't convince them to go back. Not only did I have to grasp chunks of crumbly bread with the chopsticks instead of sticky lumps of rice, but I had to keep one eye on the kids as they jostled each other on the rain-slicked and crowded concrete path. Feeding the fish with chopsticks wasn't quite the experience I had imagined but it was still very entertaining, especially when a couple of enterprising snapping turtles made an appearance and dominated the session. 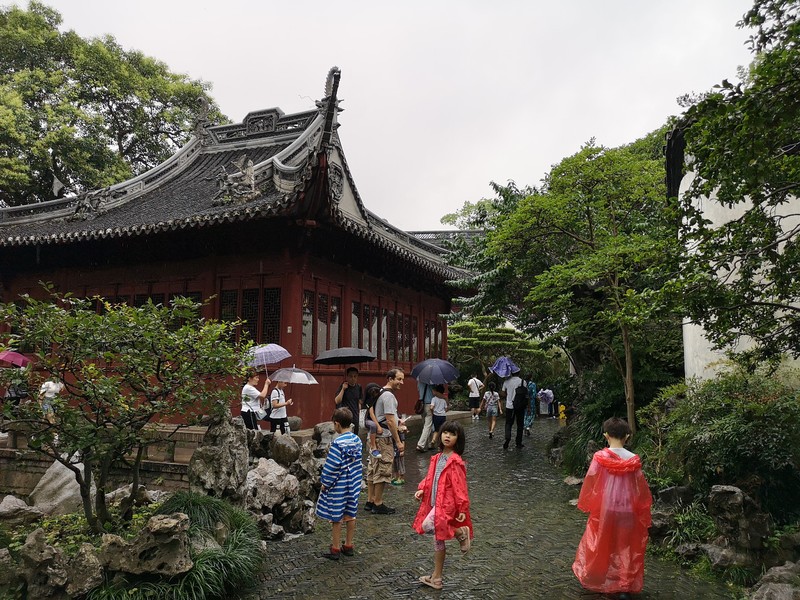 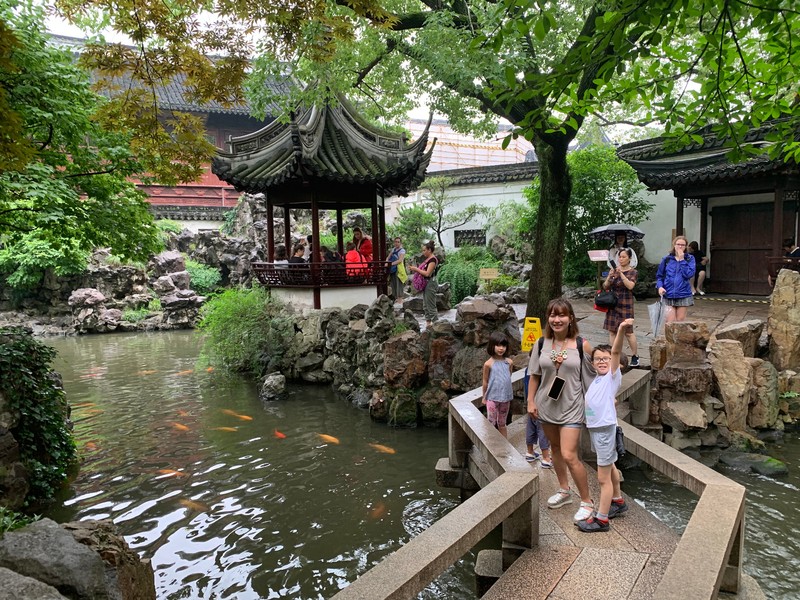 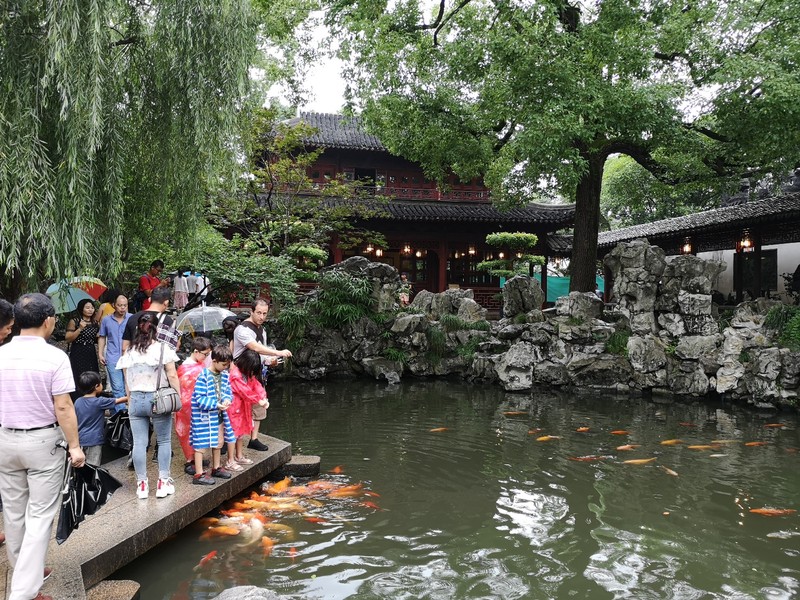 The area around the Yu Garden contains many of Shanghai's most beautiful traditional buildings as well as one of its most famous tea houses. We spent some time hunting for an amazing street market we remembered from our last trip without success. Eventually a security guard told Mei Ling that the market had been disbanded, just like our beloved street markets in Beijing. It was yet another unwelcome change from the China we remembered. We consoled ourselves by exploring a few alleys of the old town where we found a seafood store that allowed the kids to play with their live shrimp. 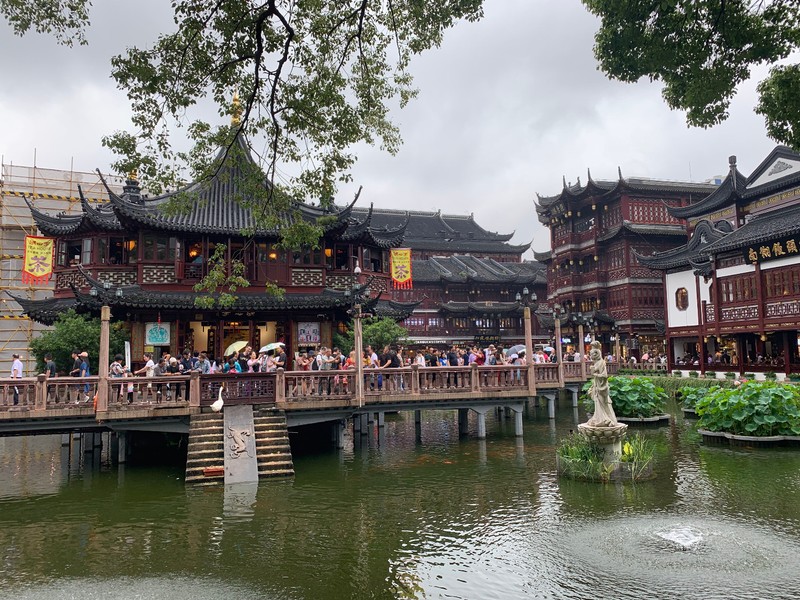 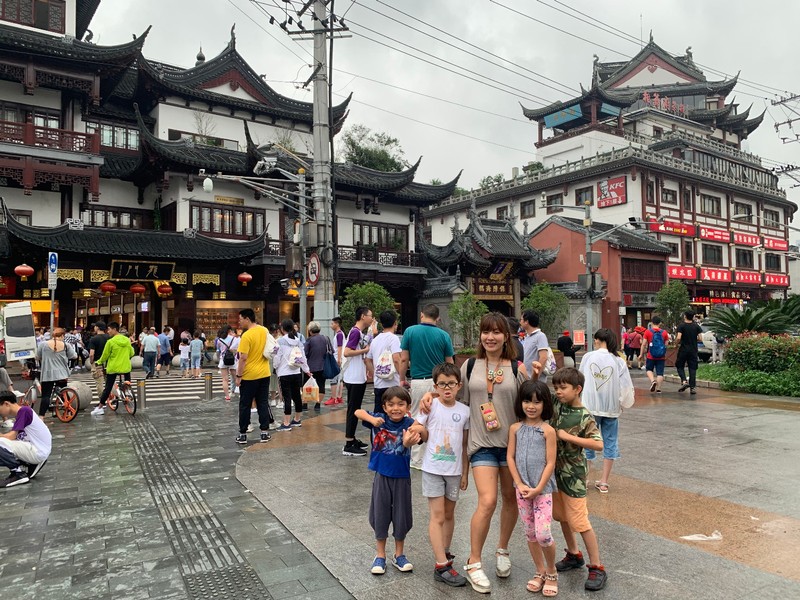 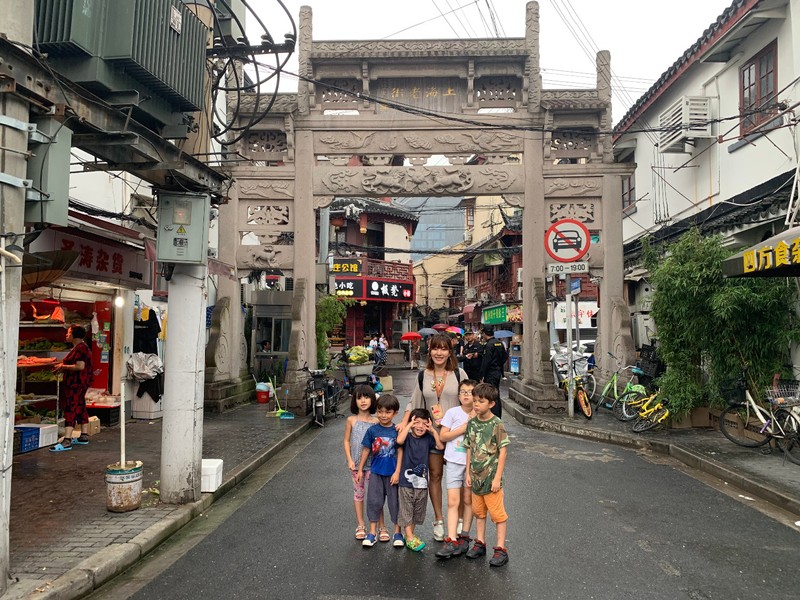 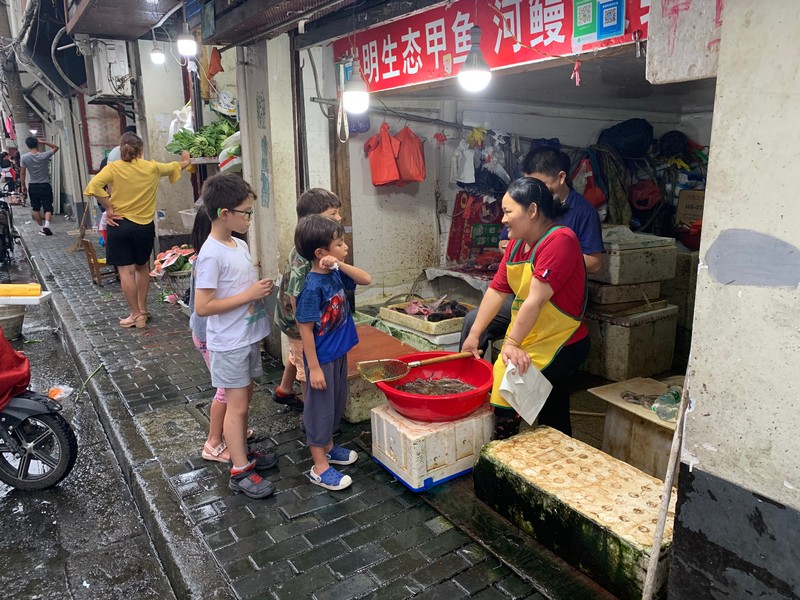 Around this time the skies opened and we were drenched with a torrential downpour that our raincoats were no match for. We'd also lost track of the metro station and had to ask other people on the street for directions. Predictably enough, we had to trot for almost half a mile before we finally found the metro to take us back to my brother's suburb. Still damp and bedraggled, we had to dash through rain and puddles one more time to meet my brother and his crew at the hotpot restaurant where we would have an early birthday celebration for Spenser. This might have been the last time we would be able to pass off a dinner with a cake at the end as his birthday party. By next summer he'll probably have to have his own party at home after we come back just like his older siblings.

Posted by zzlangerhans 02:30 Archived in China