Our Airbnb in Bergen was a pleasant townhouse on a ridge overlooking the harbor and the central part of the city. It was one of those places where the owners obviously still lived there part time and left it in its usual lived-in condition when they were hosting guests. It worked out well for our kids since there were lots of toys lying around for them to play with. It was already dinner time when we arrived so we didn't waste any time driving down to the harbor in search of something to eat. I had a couple of restaurants written down but before we had a chance to check them out, we saw a cluster of red canopies along the pedestrian walkway at the eastern wharf. On closer inspection, we found that it was a street market with numerous stalls selling seafood as well as other dishes. We managed to get ourselves a pretty good seafood dinner including wolffish sashimi. 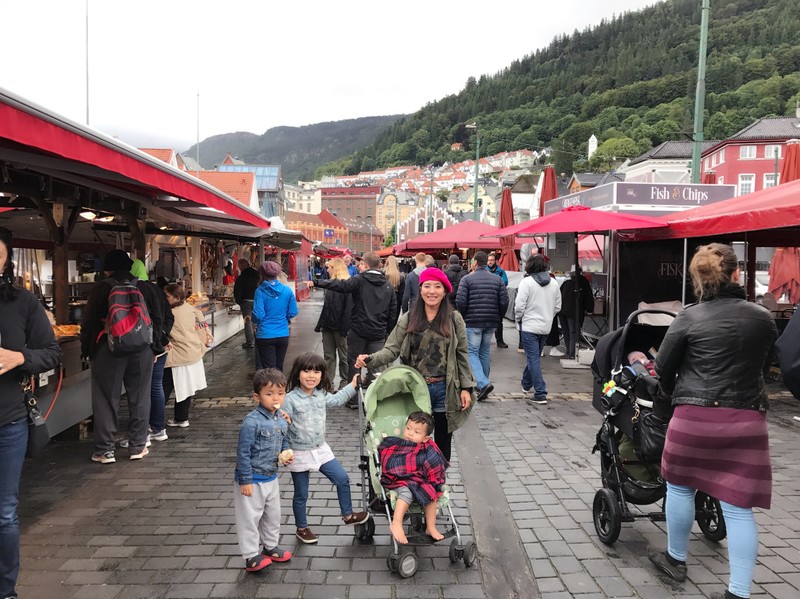 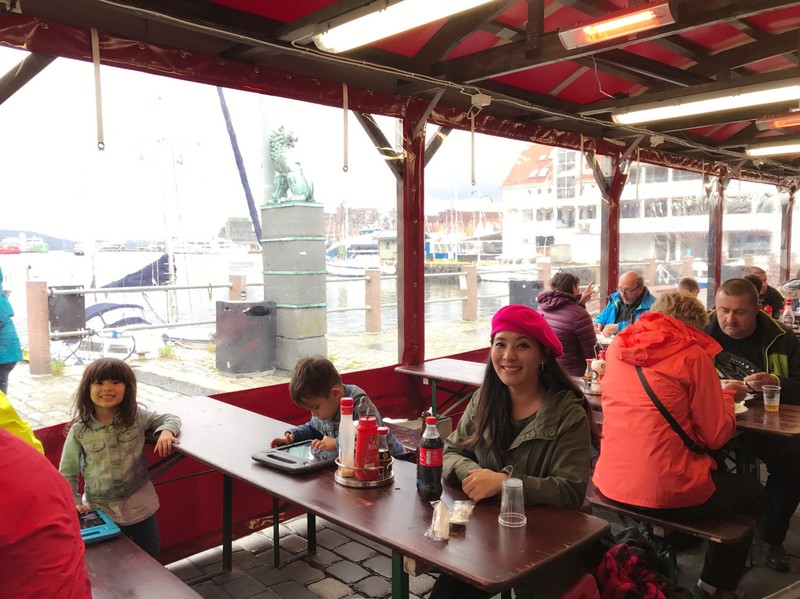 After dinner we walked through the central part of the downtown area, enjoying the typically Norwegian townhouses and quirky sculptures that were everywhere we looked. 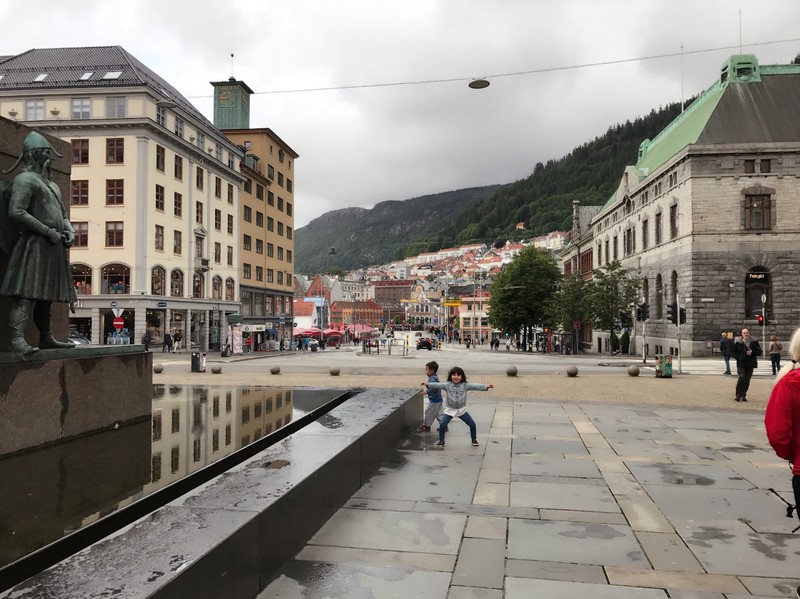 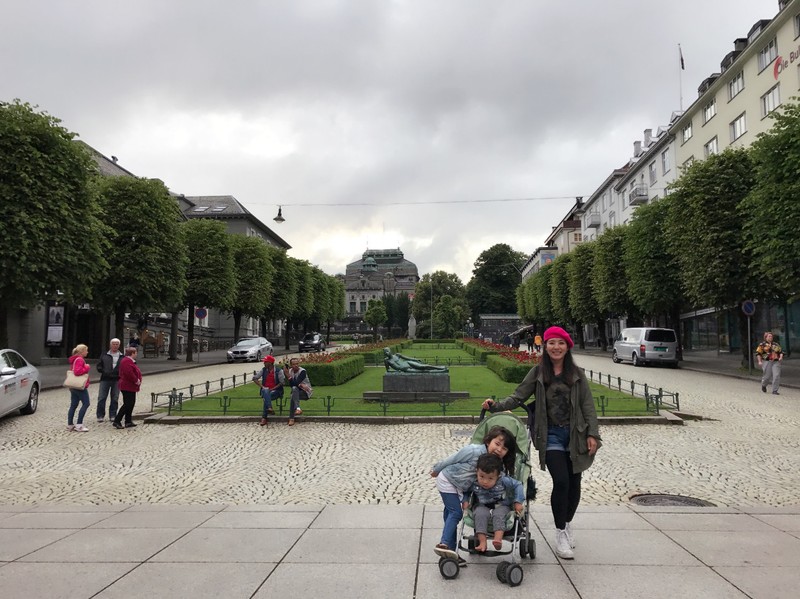 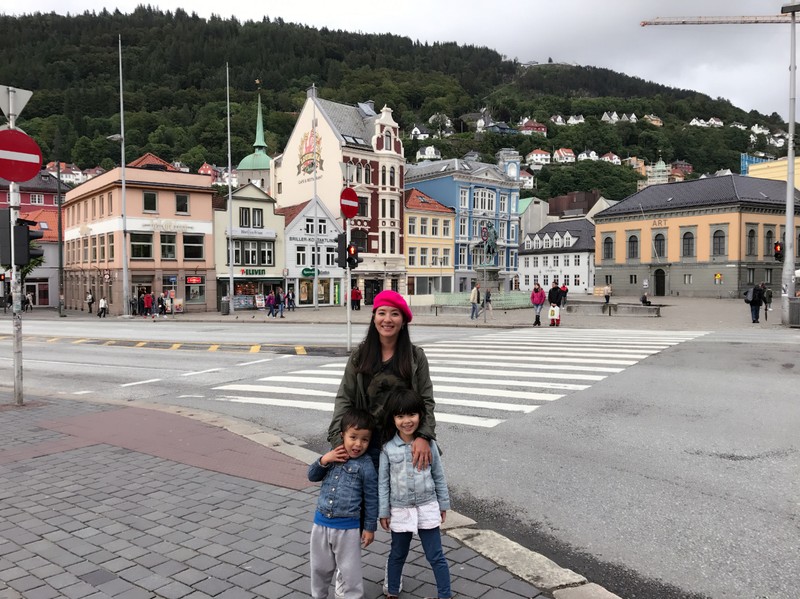 In the morning we headed straight to the harbor and the combination seafood market and restaurant Fjellskål. The market had all our favorites and the chef graciously prepared us a bespoke meal including a sashimi platter of whale and white fishes as well as broiled skate. 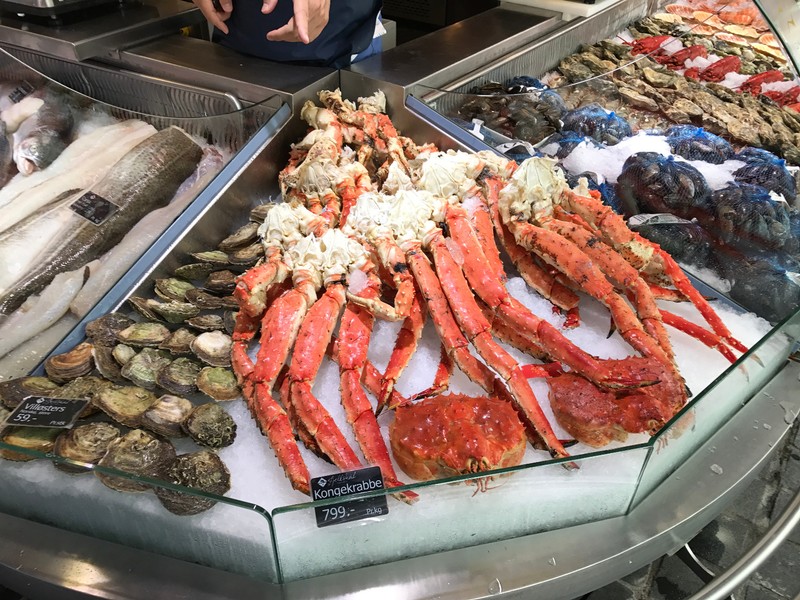 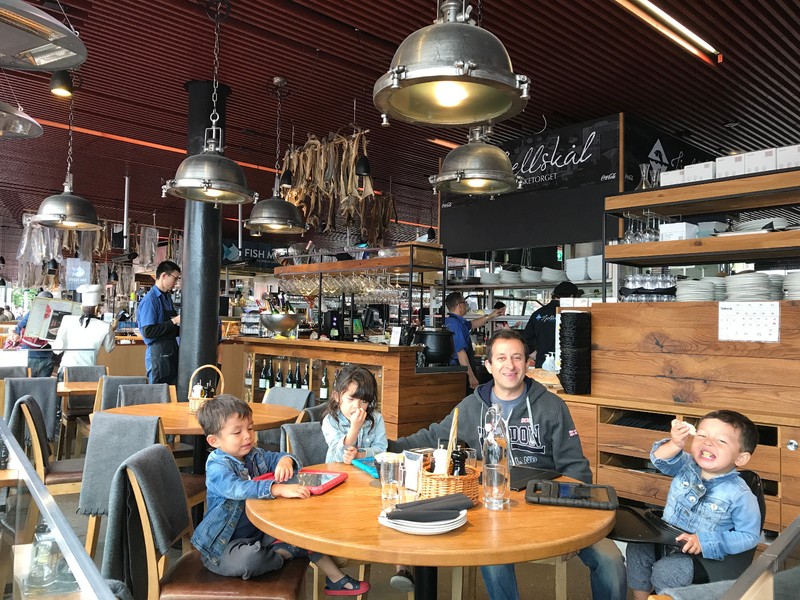 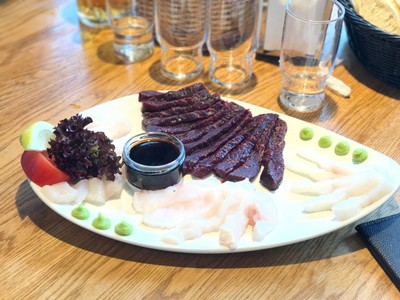 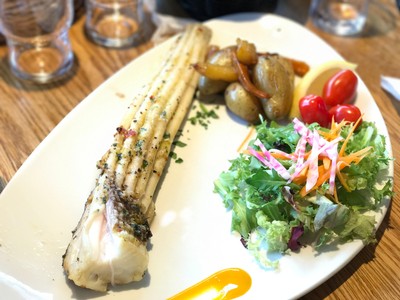 The outdoor market around the harbor was already in full swing. We walked to the northern side of the wharf to see the preserved old houses of the Bryggen neighborhood. Like the old houses of central Malmö, most had been converted into galleries and boutiques. 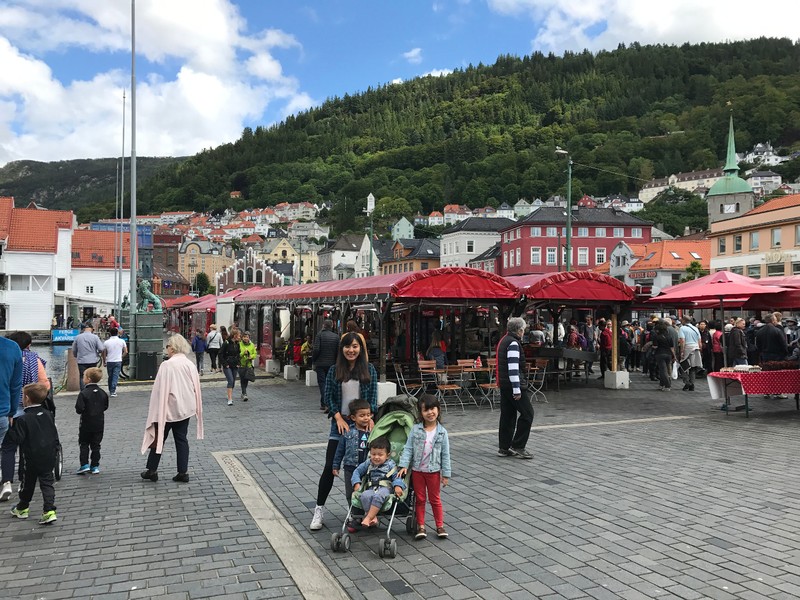 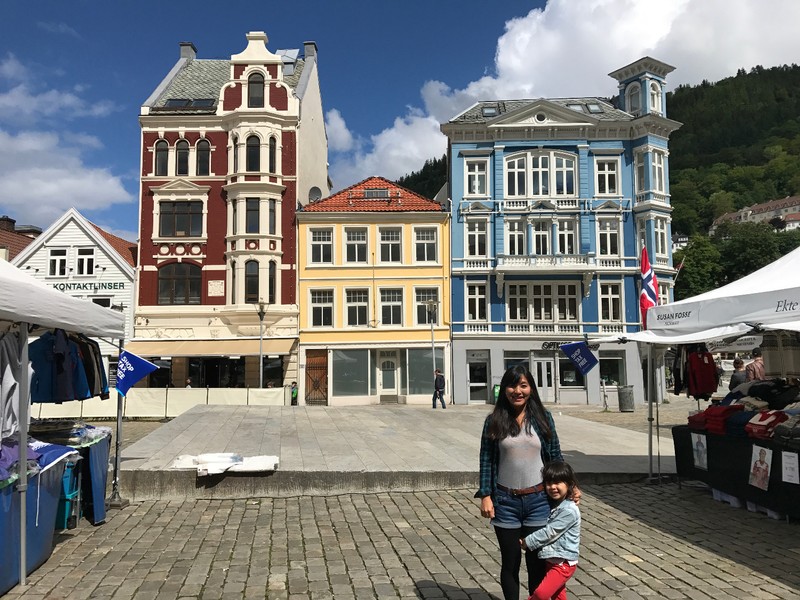 We decided to break away from the touristy harbor scene and found a more local vibe in the peninsular Nordnes neighborhood south of the harbor. The peninsula reminded me of Birgu in Malta to the extent that the ground rose steeply from the water to a central ridge. At the very top was a little yellow church. The houses in Nordnes were just as pretty as the ones in Bryggen, but the area had a much more warm and residential feel. 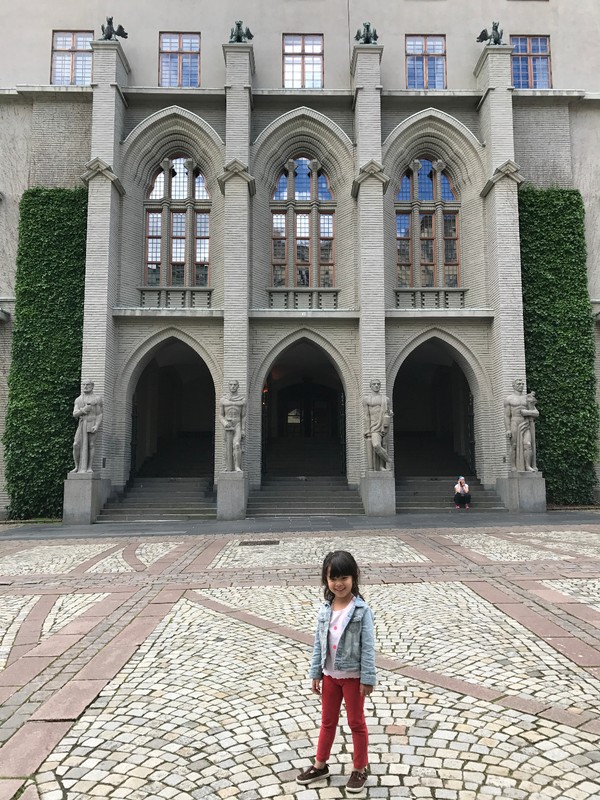 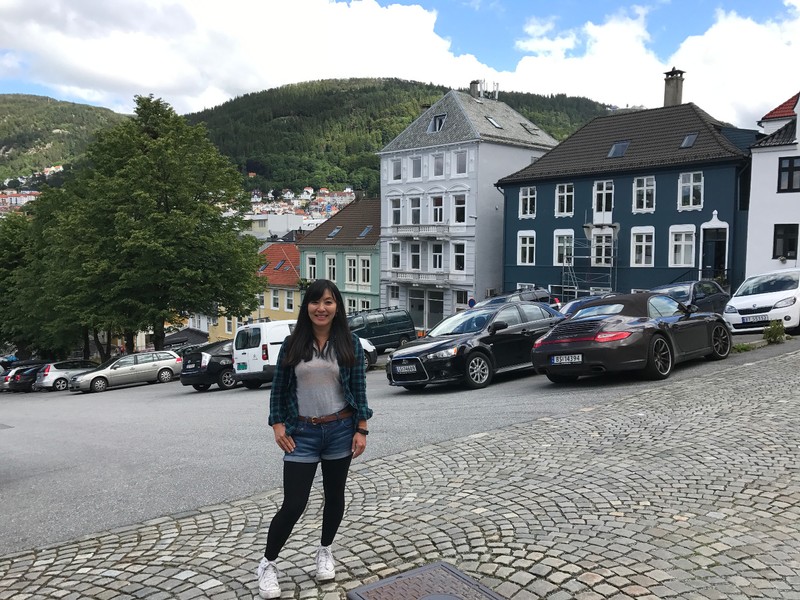 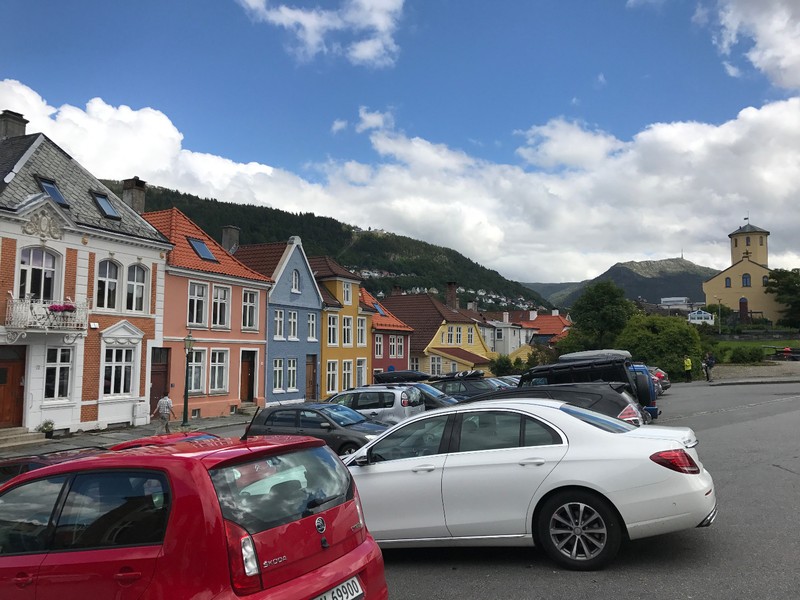 Returning back eastward, we found ourselves at Bergen's downtown park Byparken. The park was a beautiful open green space with an ornate gazebo and a large pond that was home to hundreds of seagulls. 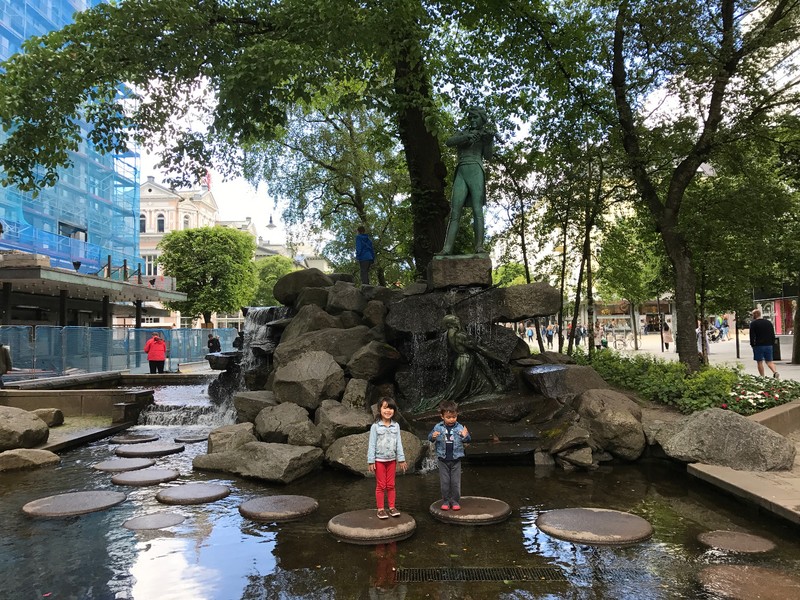 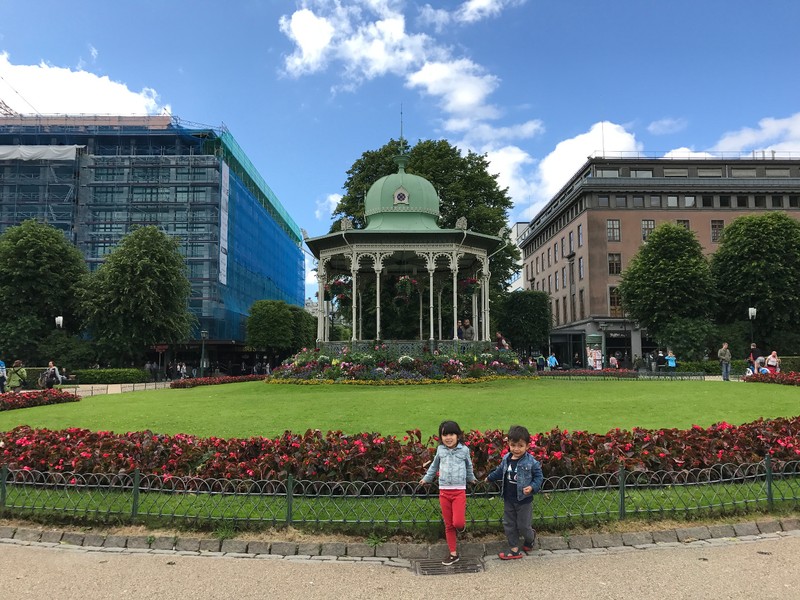 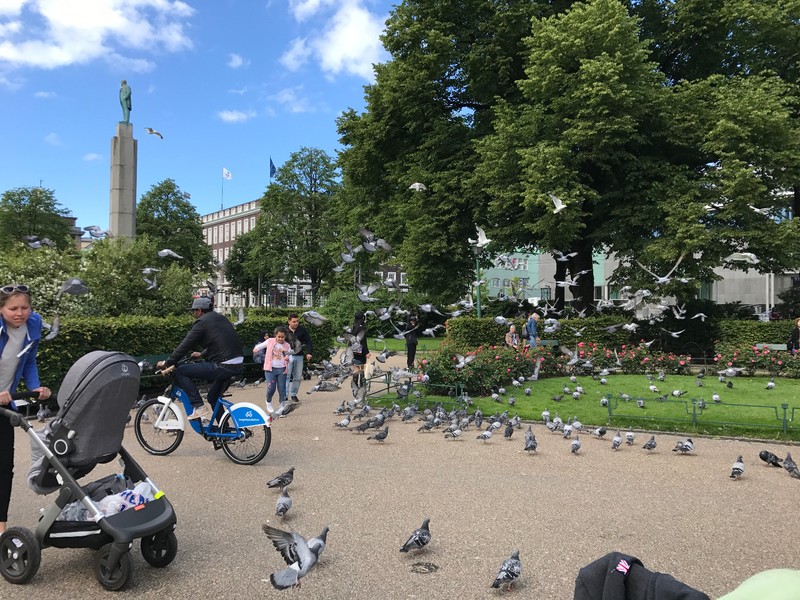 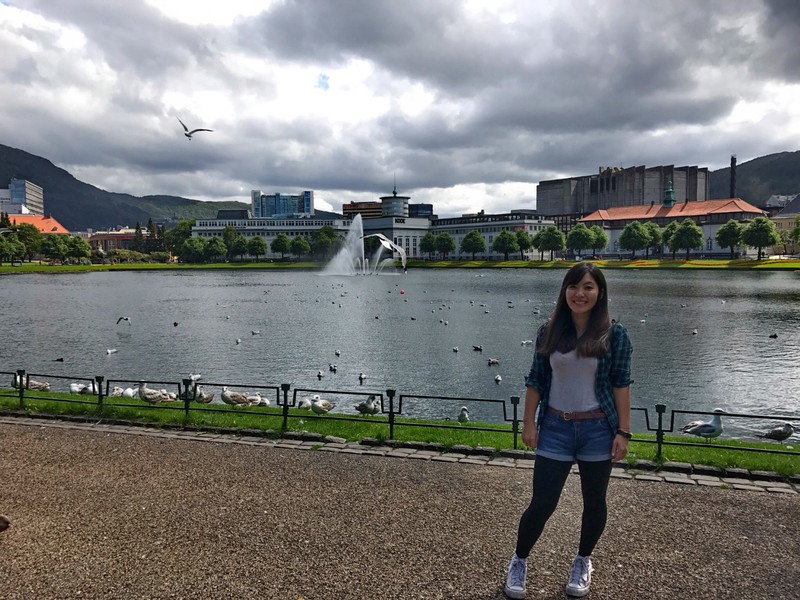 We'd seen most of downtown Bergen at this point and it was getting into mid-afternoon, so we decided to take the Ulriken643 cable car to the top of Mt. Ulriken, the highest of the mountains that surround Bergen. At the top of the mountain was an overlook over the city and the North Sea beyond, as well as an incongruous collection of exercise equipment. 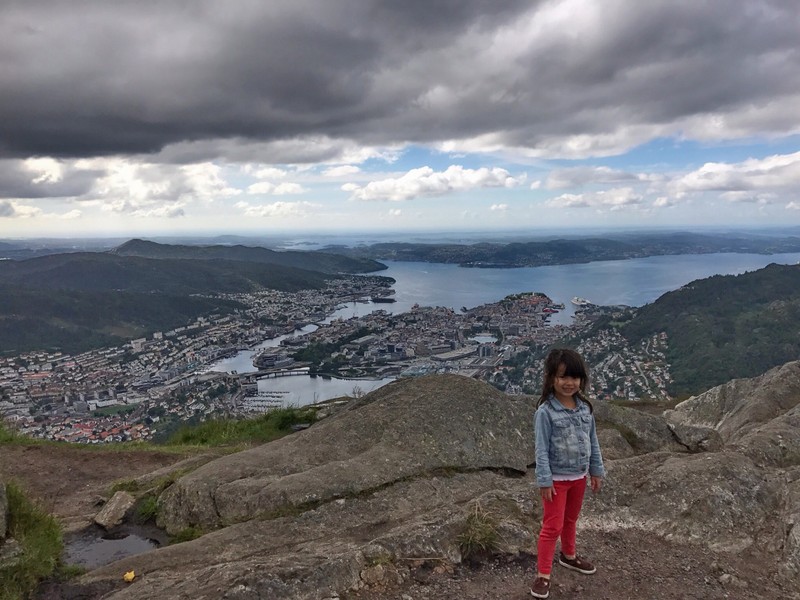 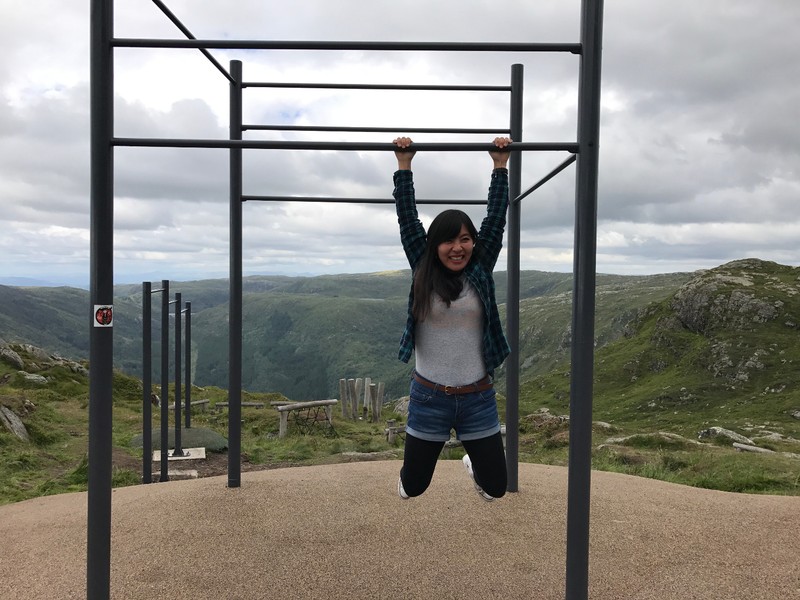 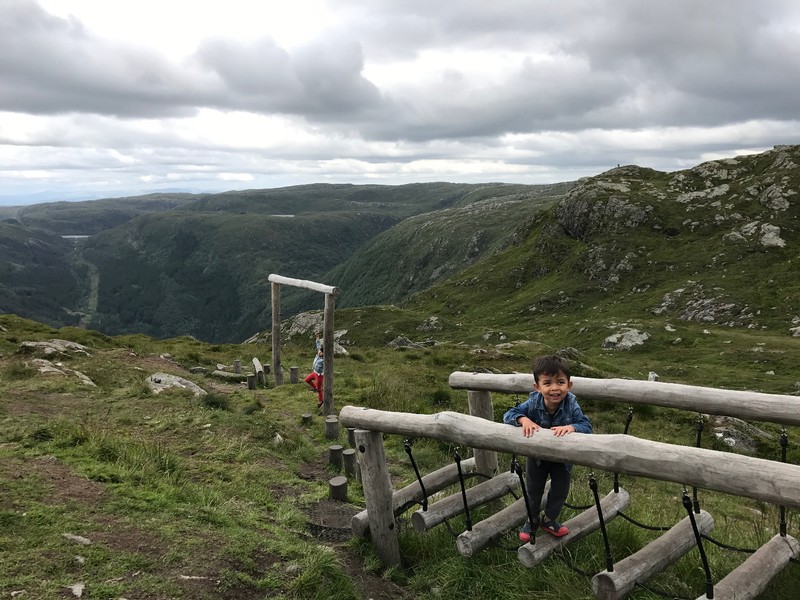 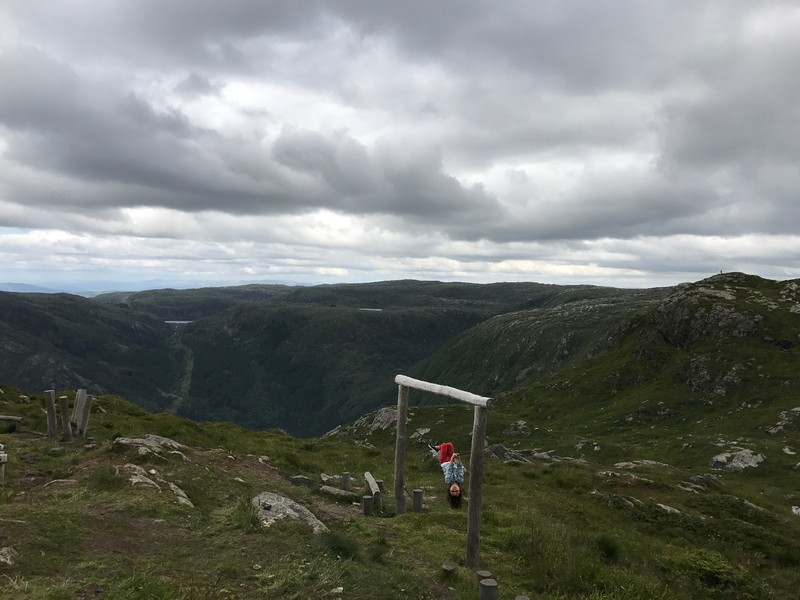 Behind us little trails twisted into the rocky hillsides, and we saw people and sheep scattered around the distant landscape. We couldn't resist the instinct to explore and headed down the most promising path. We made some pretty good headway along the choppy trail and eventually summited a hillock with far-reaching views over the otherworldly landscape. We returned and descended in the cable car feeling a warm sense of accomplishment. 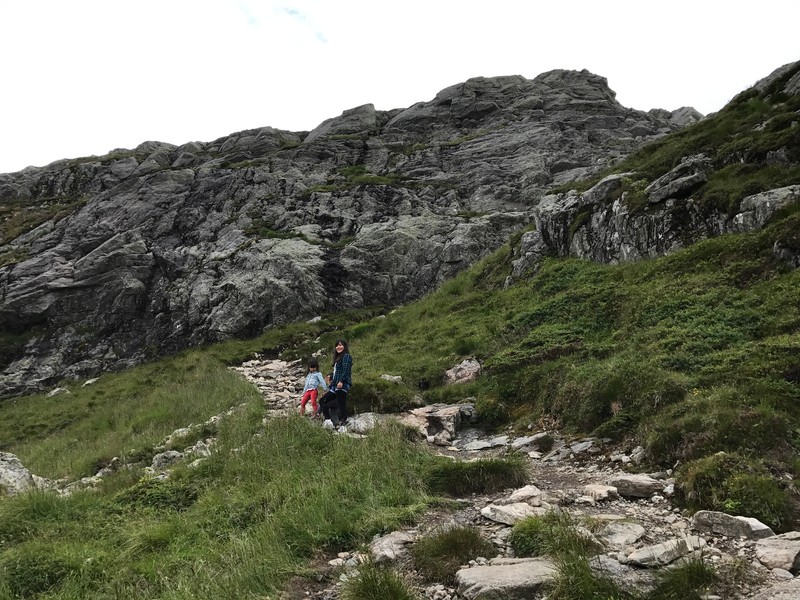 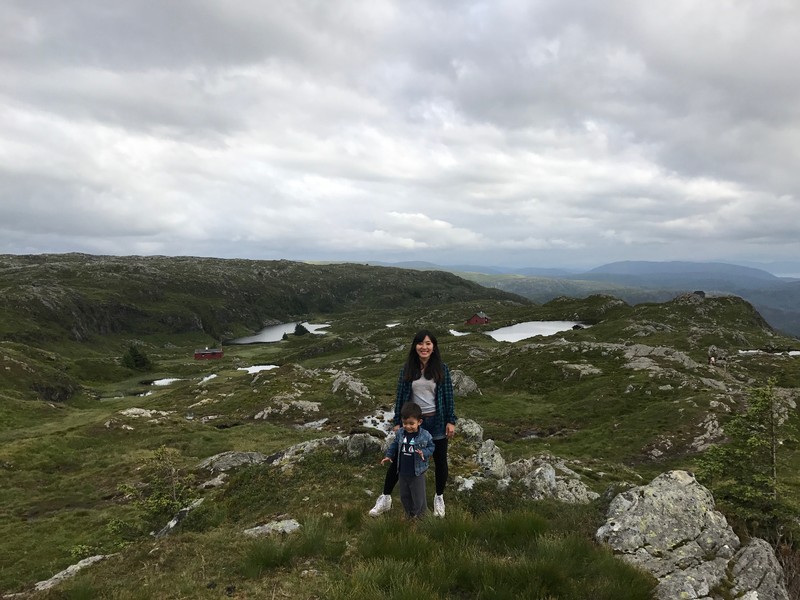 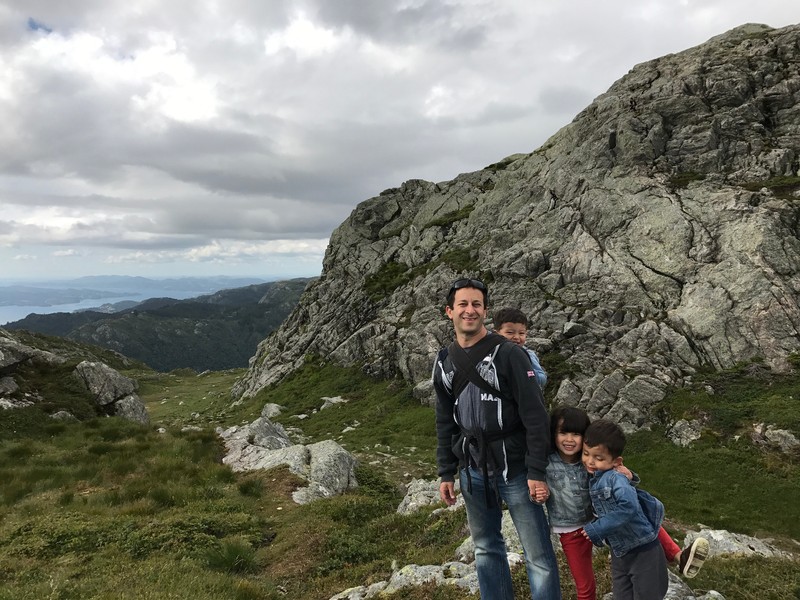 The following morning we took our leave of Bergen. On the way out of town we stopped at the Fantoft Stave Church, which is a replica of a replica of a church that was initially constructed in 1150. The destruction by arson of the prior version of the church is a story almost too complicated and bizarre to be believed. Inside the church, Cleo asked me why Jesus had been crucified. Fortunately, I already knew the answer from The Hitchhiker's Guide to the Galaxy. "Because he said people should be nice to each other for a change", I told her. 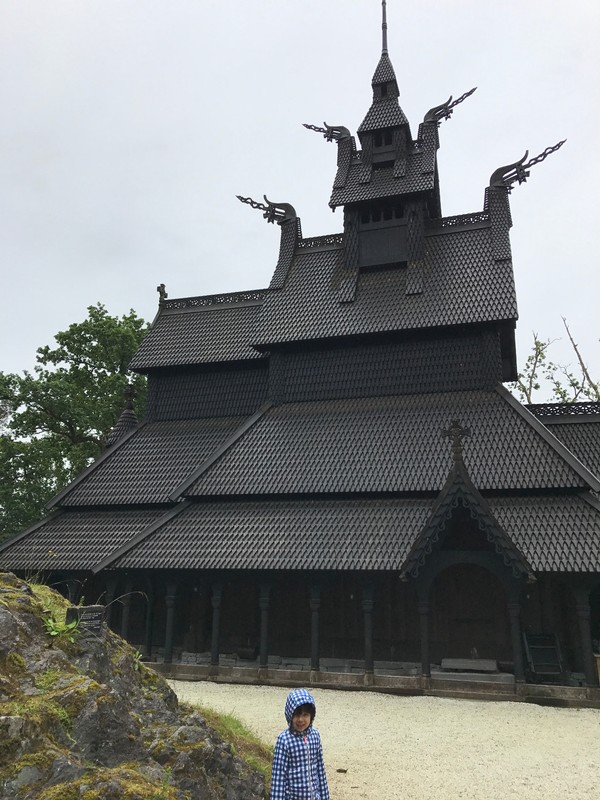 Just outside of town, TripAdvisor guided us to lunch at an unusual restaurant that was an homage to American 50's style. Part of the restaurant was a real yellow school bus that had been built into one wall. There was also the requisite jukebox and Elvis statue. The food was pretty good as well, if more American than Norwegian. 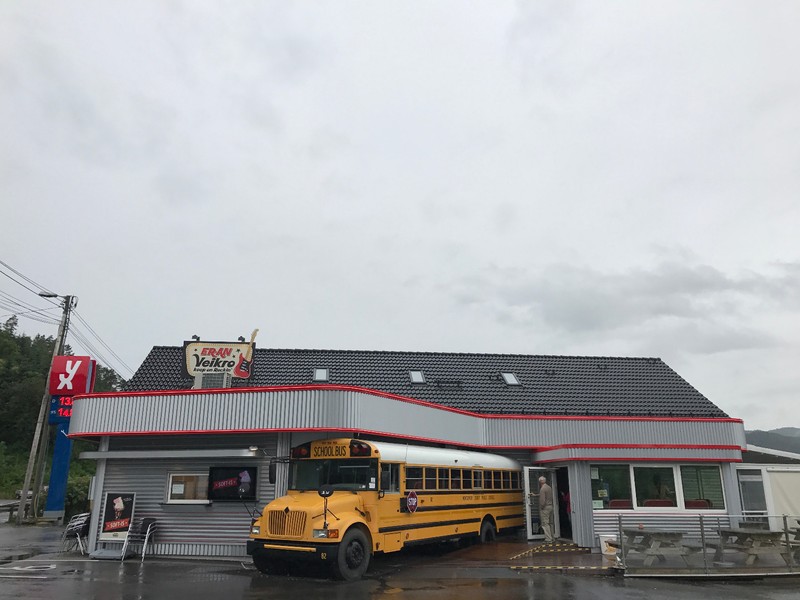 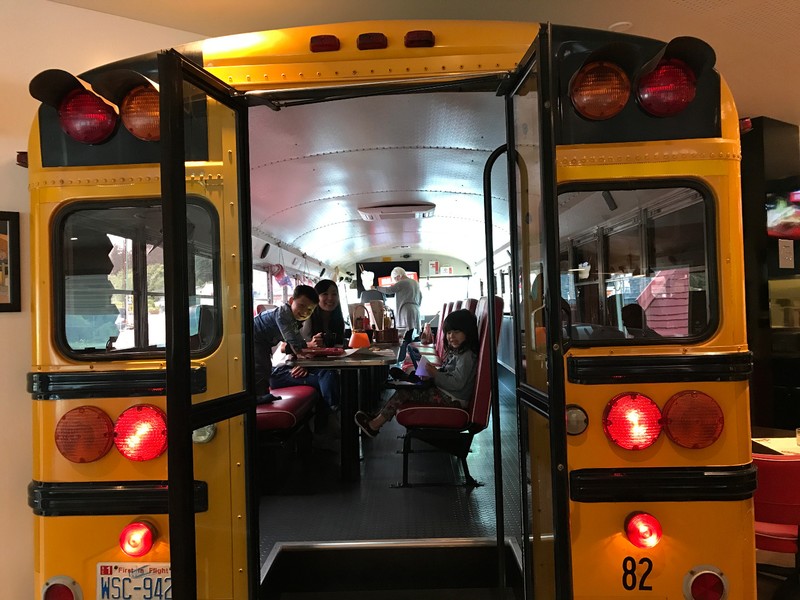 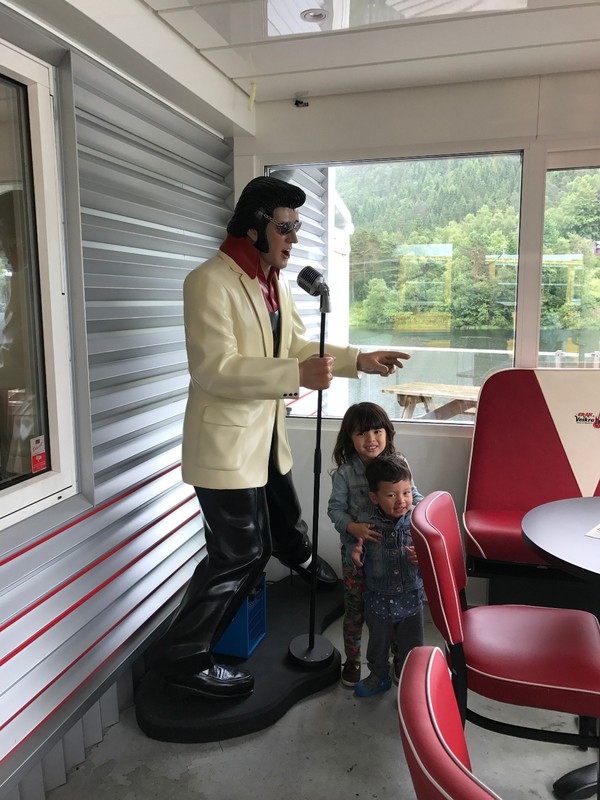 The drive to Stavanger took up most of the rest of the day, in no small part due to two ferry crossings. It was a good reminder of why we usually try not to drive more than three hours between destinations on our European road trips, but fortunately it was the only long drive of the trip. 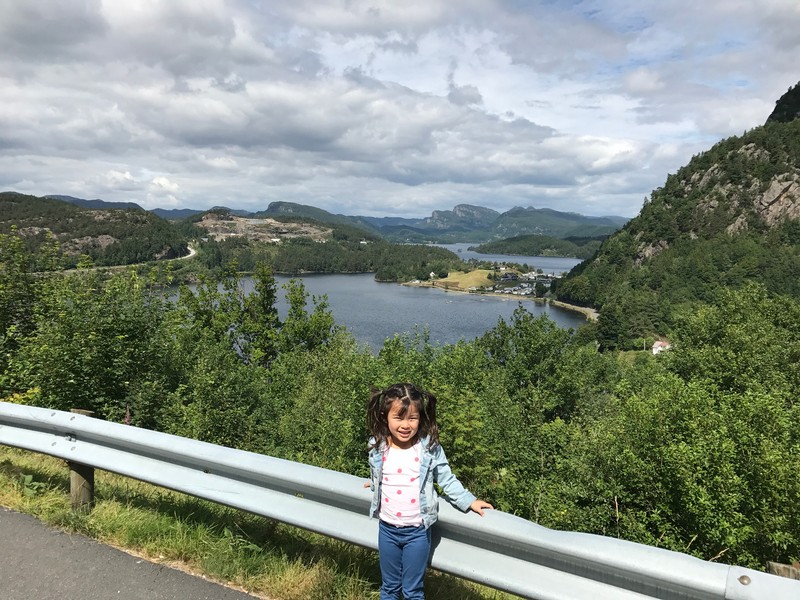 Posted by zzlangerhans 03:29 Archived in Norway